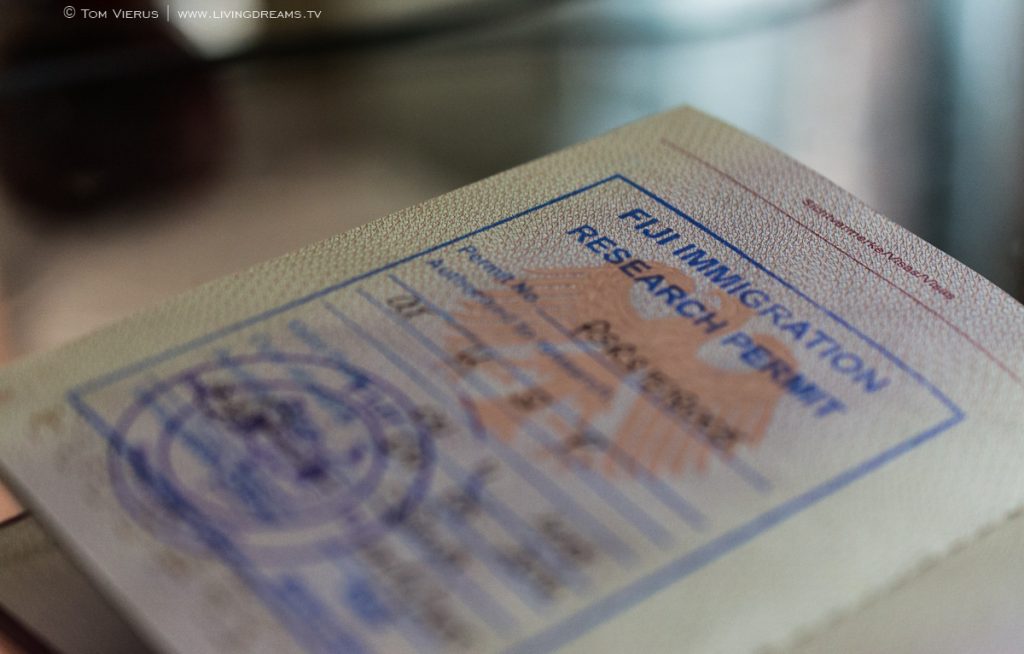 For the last few weeks I have been busy organizing my project on scalloped hammerhead shark nurseries here in Fiji. Maybe quite normal for field work I‘ve been facing several challenges that were sometimes not easy to solve. My Research Visa gave me the one or other headache and only after dozens of forms and emails, a short stay in Vanuatu (well, there are worse things) and several visits at the Immigration office in Suva I was finally holding my passport with the beloved Research Visa stamp.

Following this success I started “training” in the Rewa River, learning the necessary methodology for my project in western Viti Levu: how to handle the gillnet we are catching the sharks with, how to measure, tag and release the hammerheads (or other sharks) and also very important even though not catch related: how to deal with local customs and people. 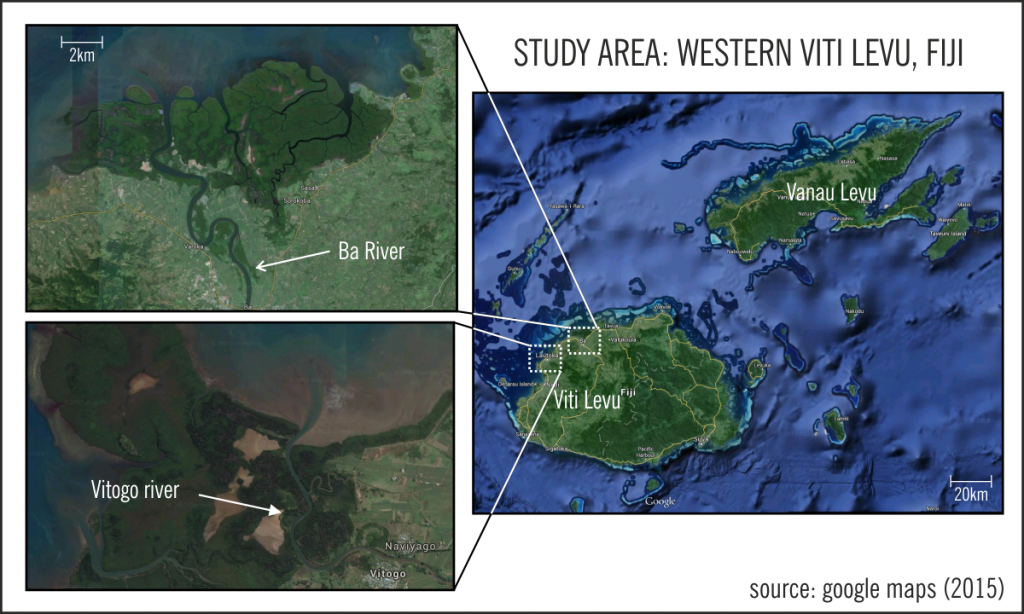 After several trips out in the river mouth of Fiji’s biggest river, I am now ready to collect my own data in the west of Viti Levu. A study by Rasalato et al. from 2010 accessing Traditional Ecological Knowledge (see a great post on TEK here) indicated that several rivers of Fiji’s main islands Viti Levu and Vanua Levu serve as potential nursery areas for scalloped hammerhead sharks. As part of a wider three-year program led by my supervisor and head of the Marine School of the University of the South Pacific, Prof. Ciro Rico, these rivers will be sampled and it is aimed to eventually assist the government in adopting a National Management Plan for the endangered scalloped hammerhead shark.

The Rewa River has been investigated by Celso Cawich and the volunteer support of Project Abroad and Frontier for over a year with interesting data collected that strongly suggests that the rivermouth serves as a nursery area. Over 1000 scalloped hammerhead sharks have been caught during that time frame, but the results still have to be fully analysed to publish a paper and prepare consequent future steps. 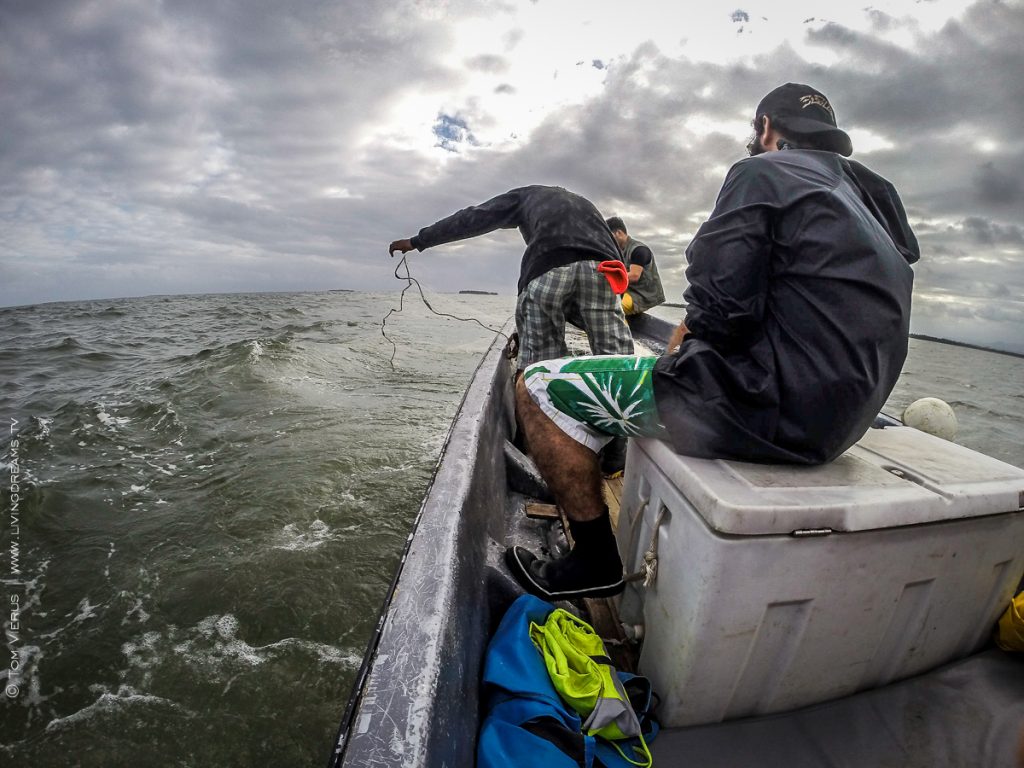 Suva has around 300 rainy days a year and the sea in the Rewa delta can be a little rough from time to time.

As part of my master thesis for the ISATEC Master (International Studies of Aquatic Tropical Ecosystems) I am joining the USP Shark Research Program to investigate two of the other rivers of Viti Levu: the Ba River and the Vitogo River in the north-west of the main island. For the next three and a half months I’ll be sampling various locations in and around the river mouths and conducting questionnaires with local fishermen. My results may give hints on the distribution and occurrence of the sharks in the study area, the traditional local perceptions, the current coastal fishing pressure and might confirm the suggested parturition period.

It is assumed that the parturition period in this region (the time females come to shore to give birth) is starting around November/December and lasting to approximately February/March. During my time here in Fiji I’ll be covering that exact time frame, so let’s see what happens and how many sharks  – or if it all – are being caught. 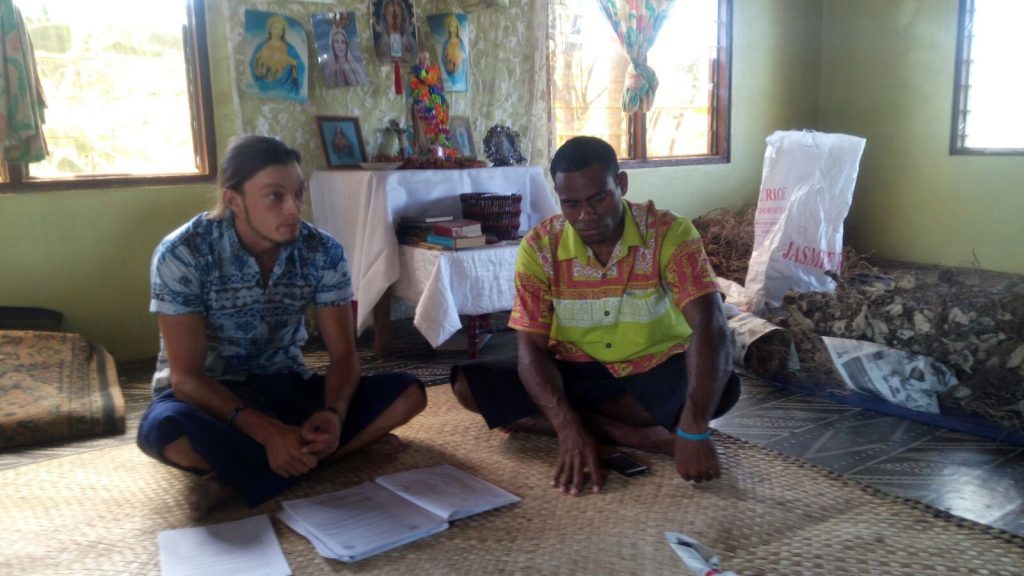 The Sevusevu is a very important tradtion here in Fiji: after presenting kava, a root that is ground up and drunk I explained my project and asked for permission of the headman. 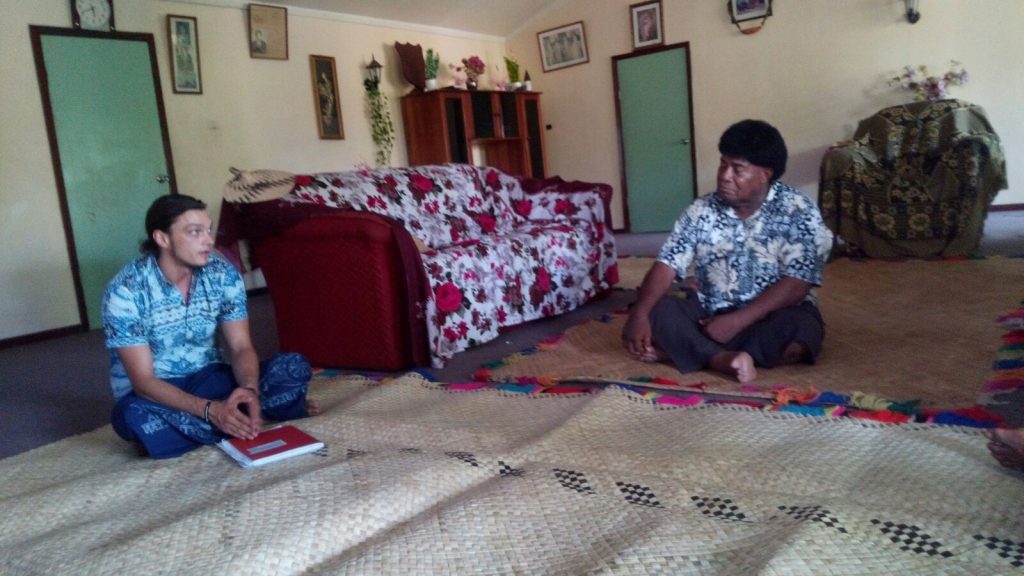 I was happy that both villages, Votua and Vitogo approved my project plan and invited me to stay in their villages.

Besides the smooth hammerhead (Sphyrna zygaena) and the great hammerhead (S. mokarran), S. Lewini was added to Appendix II of CITES (Convention on International Trade in Endangered Species of Wild Fauna and Flora) in 2014, strongly regulating the international trade of all related product.

Overfishing pushing shark pouplations to a limit of existence

With the common behaviour of aggregating in large schools, hammerhead sharks are particularly vulnerable to overfishing. In addition they are also heavily targeted for the asian fin market due to their enormous dorsal fins. In some areas like the North-West Atlantic S. Lewini populations are estimated to have declined by 83% (Hayes et al. 2009) and another study found in 2006 that hammerheads represent more than 42% of total bycatch European industrial freeze trawlers targeting small pelagic fish off the coast of Mauretania (Zeeberg et al. (2006).

What makes my project particularly important and interesting is the fact that female hammerheads sharks have shown to be highly philopatric (Hayes et al. 2009), i.e. they return to the same grounds across years to give birth to their youngs. This makes it crucial to identify these areas and to ultimately protect them and ensure the long-term survival of this species. With increasing coastal development many once important areas are being destroyed and no one knows how many potential nursery grounds have already been lost due to a massive lack of knowledge and studies in this field.

On some nights out on the water we observed beautiful sunsets. Hours on the boat can be long inbetween the sampling, but this time of the waiting is just great. Watching the sun set and fading away with one’s thoughts…

Nursery areas or the kindergardens of sharks

Female sharks usually give birth to around 15-31 pups in shallow water close to shore. Here, the small sharks have increased chances of surviving, as they are being protected from bigger predators and find enough prey. Heupel et al. (2007) defined a nursery area giving it three distinctive attributes:

To prove and finally describe such an area all these attributes have to be met. It might be frustrating in science, but even if I do not find indicators that these rivers function as nursery areas, it is important data that can be built upon in future. Shark research is still in its infancy and there are many questions still to be addressed and answered. 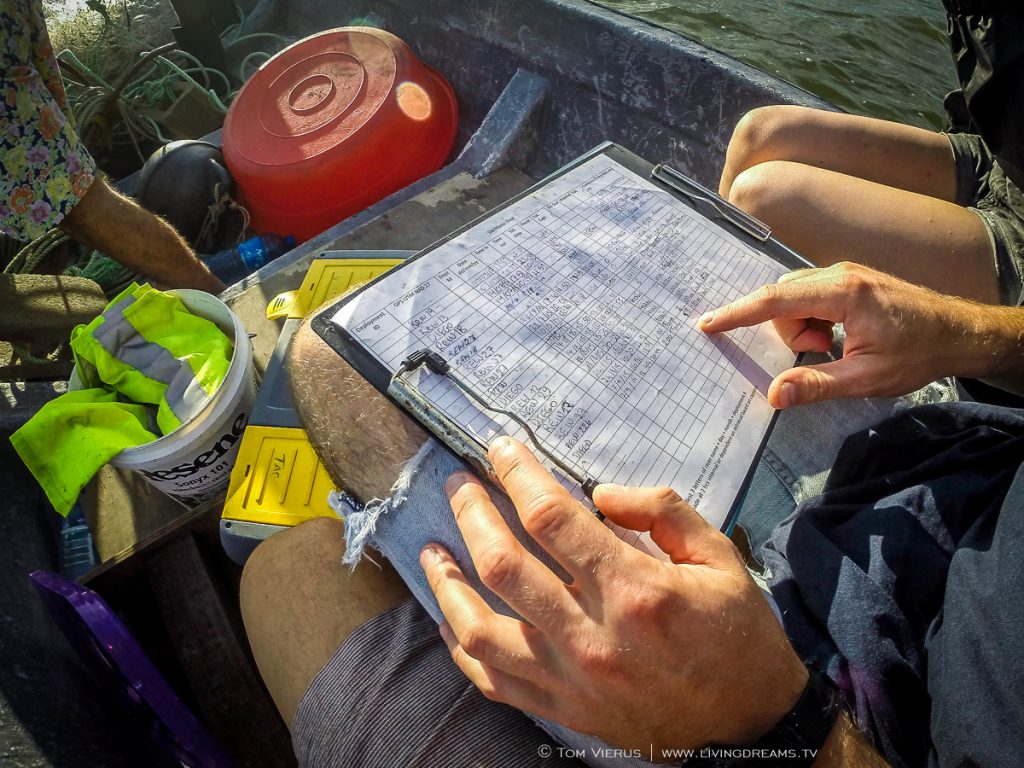 The waterproof paper that we use to record all the data: size, umbilibal scar condition, sex, tagging number ..

Sharks had and have a bad standing among most people around the world but step by step this is changing and the public is increasingly made aware of their importance. Countless NGO’s and private initiatives advocate shark conservatopn and spread knowledge to the people. Usually sharks only make it to the headlines if a life is lost. That is indeed tragic and unfortunate, but given that every day thousands of shark-man encounters happen worldwide, an average ten people dying from shark attacks every year is very low. More people die from falling coconuts, hundreds more from hippos in Africa, even more people get killed by drink-vending machines every year. And yet most of the time we are taught that sharks are mindless killing machines. 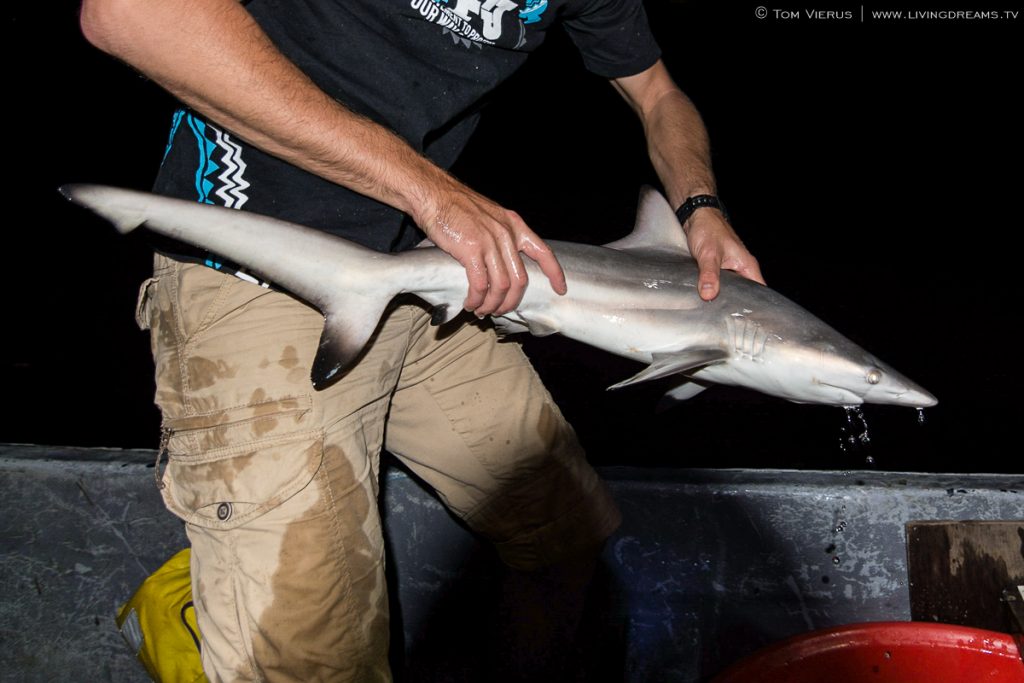 100 Million sharks being killed a year

Currently around 100 million sharks are killed every year (Worm et al., 2015), a rate that by far exceeds a sustainable fishery. As most sharks tend to be K-Strategist, they are slow growing, long-lived and late maturing and increasing fishing pressure in the last 30 years have let to declining shark populations in many regions (Ferreti et al. 2010). By taking out too many of these apex predators, we are disturbing the natural balance and actively altering ecosystems. Only with valid and strong data, current and future scientists will be able to advise governments and fishery departments to take the right decisions and ensure the continuing existence of sharks and ultimately our oceans.

Sharks have been around for 400 million years and have thus been shaping our oceans to a large extent. Since humankind has begun to rip the oceans of fish with sophisticated fishing technologies there are no more places to hide. We have and are altering coastal regions and change whole ecoystems shifting equilibria from healthy coral dominated reefs to dead and algae dominated systems. Not only shark populations have declined around the world, but fisheries of all kind have collapsed in the past due heavy and permanent overfishing not minding nature’s laws. Fortunately, there are thousands of dedicated scientists, naturalists, government officials, conservationsits, organisations and privat people fighting for a more sustainable use of our given ressources and ensuring a worthwile living of many more generations to come. It is in our hand right now and there is no one else to blame. If we leave a dead and decimated oceans for our children’s children, they will be wondering, how on earth we could have let that happen. 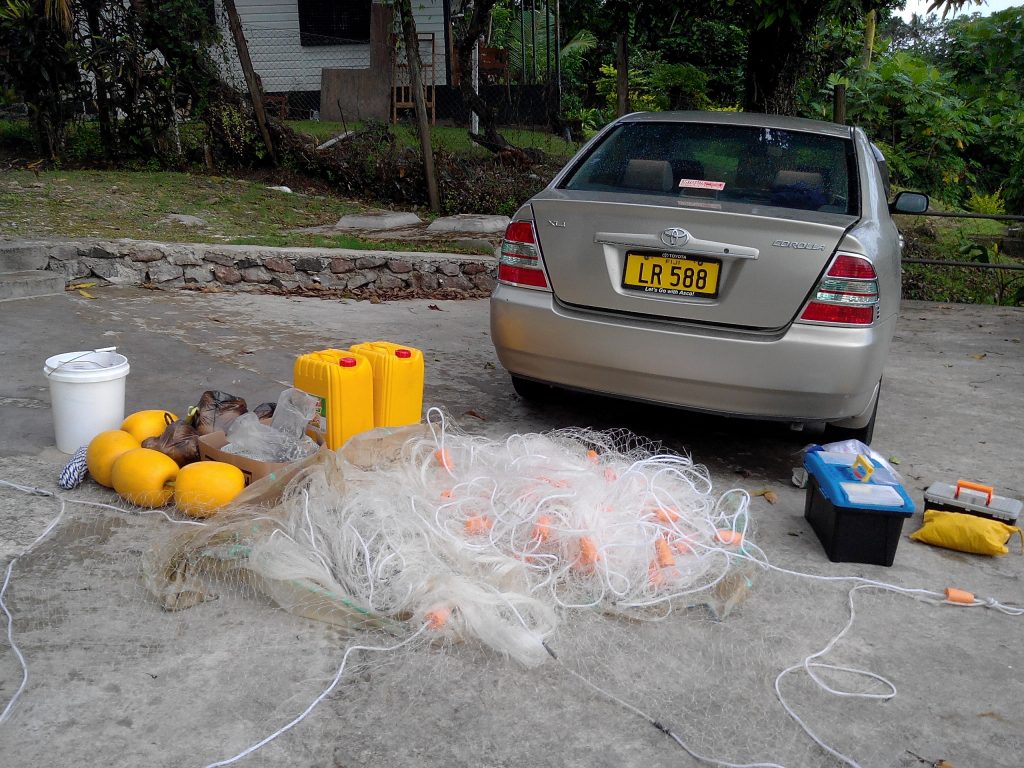 My rental car and most of the equipment I’ll be using for the field work.

A substantial part of my thesis lies in social work. I’ll be conducting questionnaires with subsistence fihserman in the respective rivers, analysing local beliefs and perceptions of sharks, traditional myths and also the current rate of fishing and potential changes of the last decade among other things. 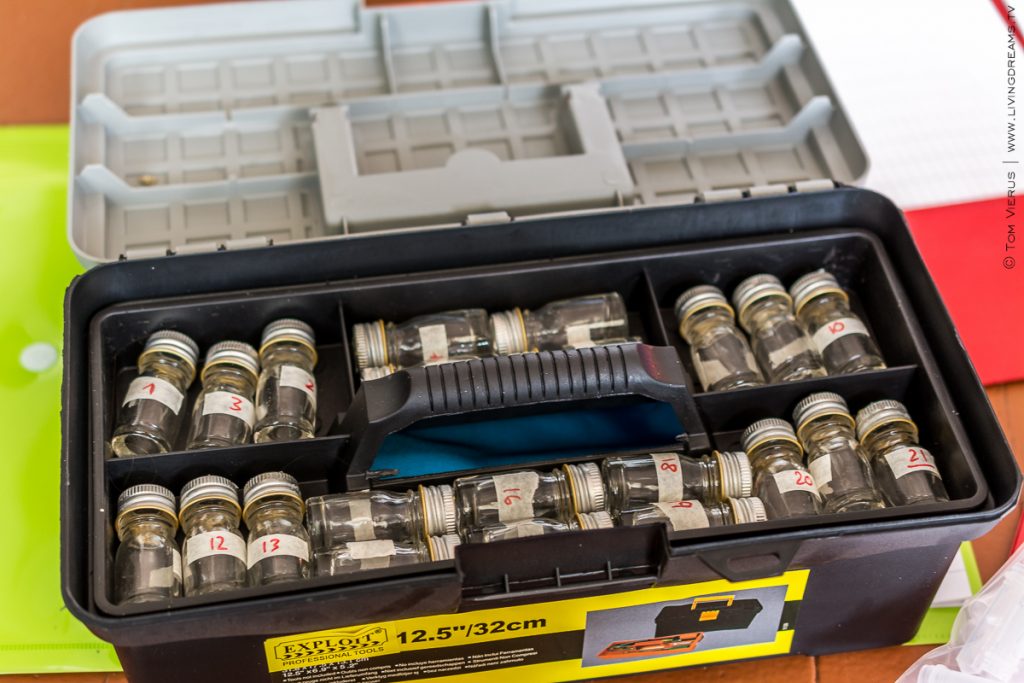 I am hoping to build a good and trustworthy relationships with the local villagers and fishermen over the coming weeks here in Votua and Vitogo. The outcome of my study not only depends on the sampling success in the rivers but also stands and falls with my conncetion tothe villages. With the support of the local chiefs I am hoping to gain unbiased insight in the local communities and their life and collect important findings that might eventually help shark conservation in future and add some knowledege to the already existing one. 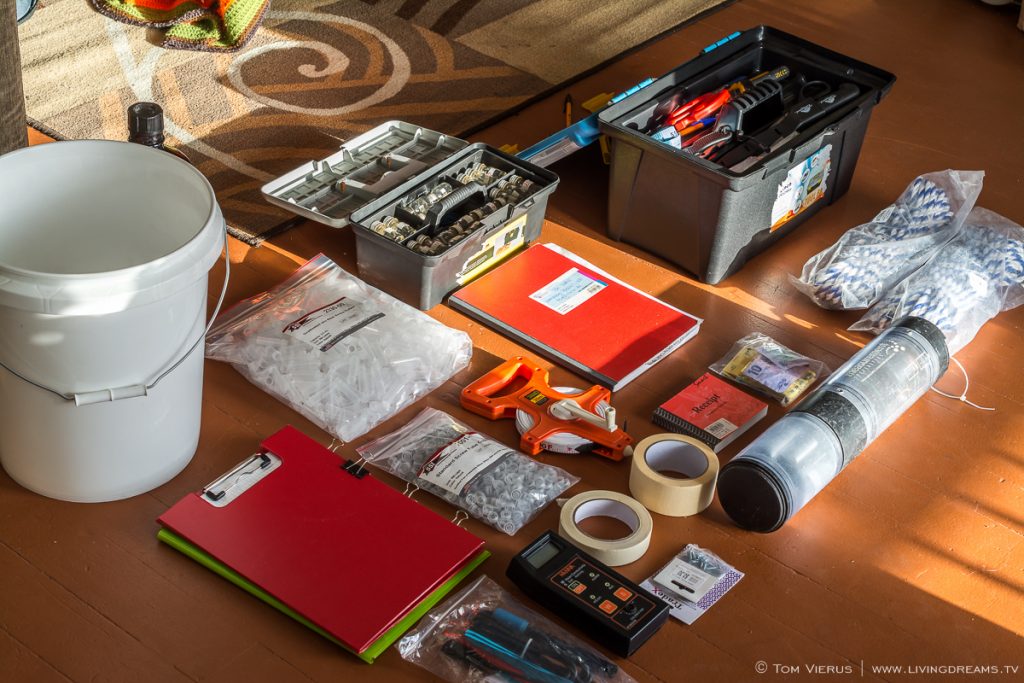 After countless hours in Suva town finding the right shops to buy necessary things everything is set up: I have bought and assembled a complete new set of field gear, starting from tool boxes with GPS, scissors, knives and lights, over buying and constructing a new 100 meter gill net up to measuring boards, ethanol and tags. I’ve met countless of helpful people during my time here in Fiji but also encountered many challenges and learnt that if I don’t do it myself, it might never be done. But I love challenges and so I do this one.

I am extremely happy about my master thesis project and I feel proud and happy to be contributing to worldwide shark research. I’ll be the first scientist investigating and assessing these areas concerning my topic and I am very much looking forward to the findings (or non-findings). The coming months will be exciting and full of long nights out at the sea fishing for sharks…

[…] the lab, investigate coral reefs, study heavy metals, conduct social studies in Africa or work on shark conservation in Fiji – you have to find a supervisor willing to back up your project either at the ZMT or the […]

[…] aggregation and parturition area in the Ba Estuary, Fiji Islands“, it is the outcome of my research there in 2015/2016. It has been a rough ride until here but I am more than happy that we managed to publish the work […]

Wonderful work Tom. Was wondering if there are any good published maps of the Rewa Delta area . This is for an economic valuation of the area

This is for an economic valuation of the Rewa delta that we are conducting for UNDP Fiji (as part of their R to R project).

I am part of the team of the Ba report (in terms of elasmobranchs in the area) for the R to R project! Some great sthings happening at the moment here in Fiji!

I made it into the International League of Conservation Photographers! | Livingdreams.tv

[…] I handed in and defended my master thesis in 2016, I was still very much at the crossroads of either pursuing a career in academia and continue my […]

Vinaka Epi, appreciate your comment! It was such a cool project and with all its challenges I look back with a big smile on my face!

This morning I joined the Global Climate March here in Suva, the capital of Fiji. With the biggest UN Climate conference...