It’s hard to imagine, but I’m closing in on being four weeks at the CRIOBE Research Station here on Moorea in French Polynesia. As the Media Manager of the #physioshark project, I have and am creating media content for future use and help them tell the story of the project. Besides the images, I have been filming over the last weeks to create a physioshark image film, that will probably be released sometime January next year. So, watch this space, for some epic footage from this wonderful place I the middle of the Pacific Ocean and the awesome work Dr. Jodie Rummer and PhD Candidate Ian Bouyoucos are doing here. 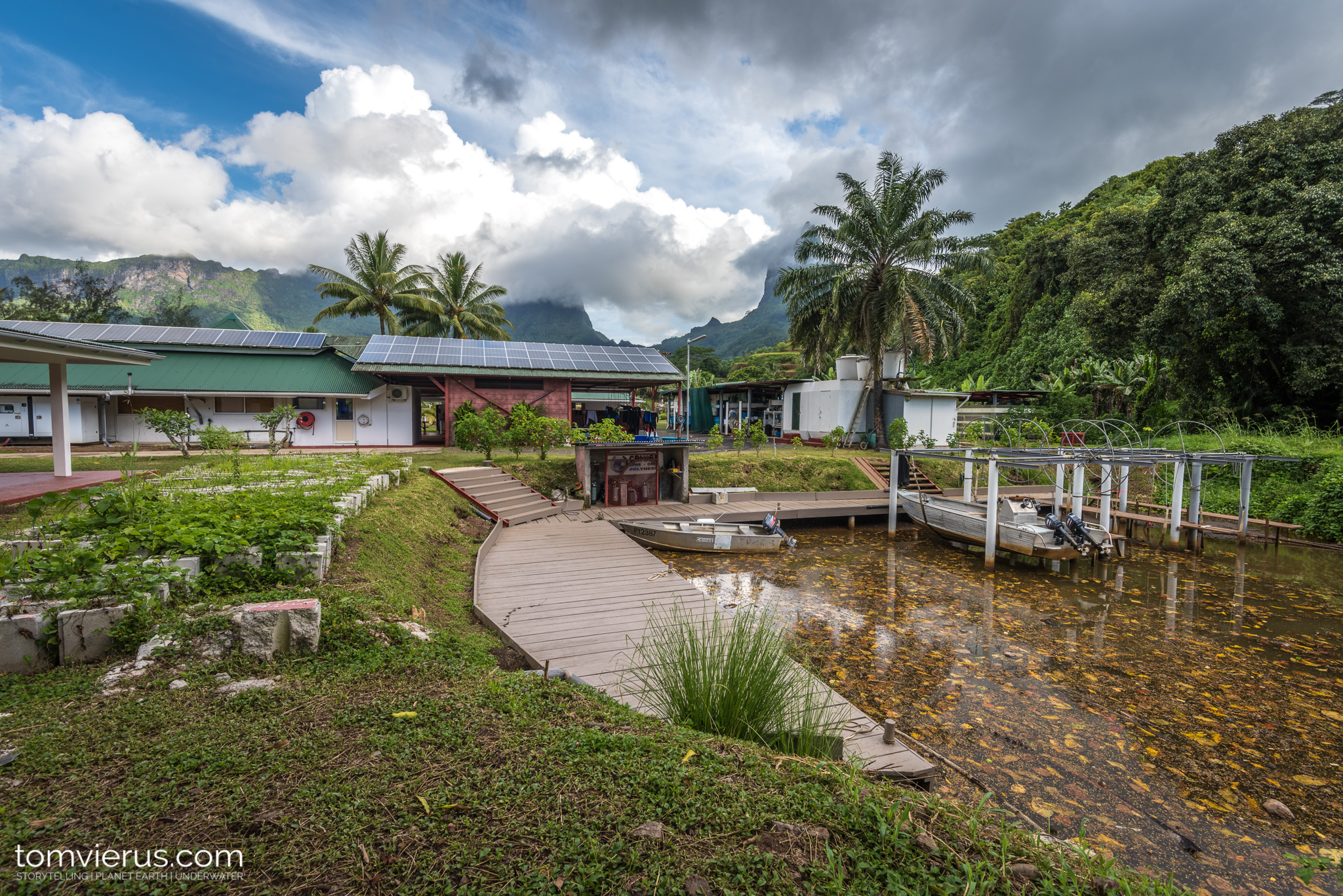 The CRIOBE Research Station on a rather cloudy day 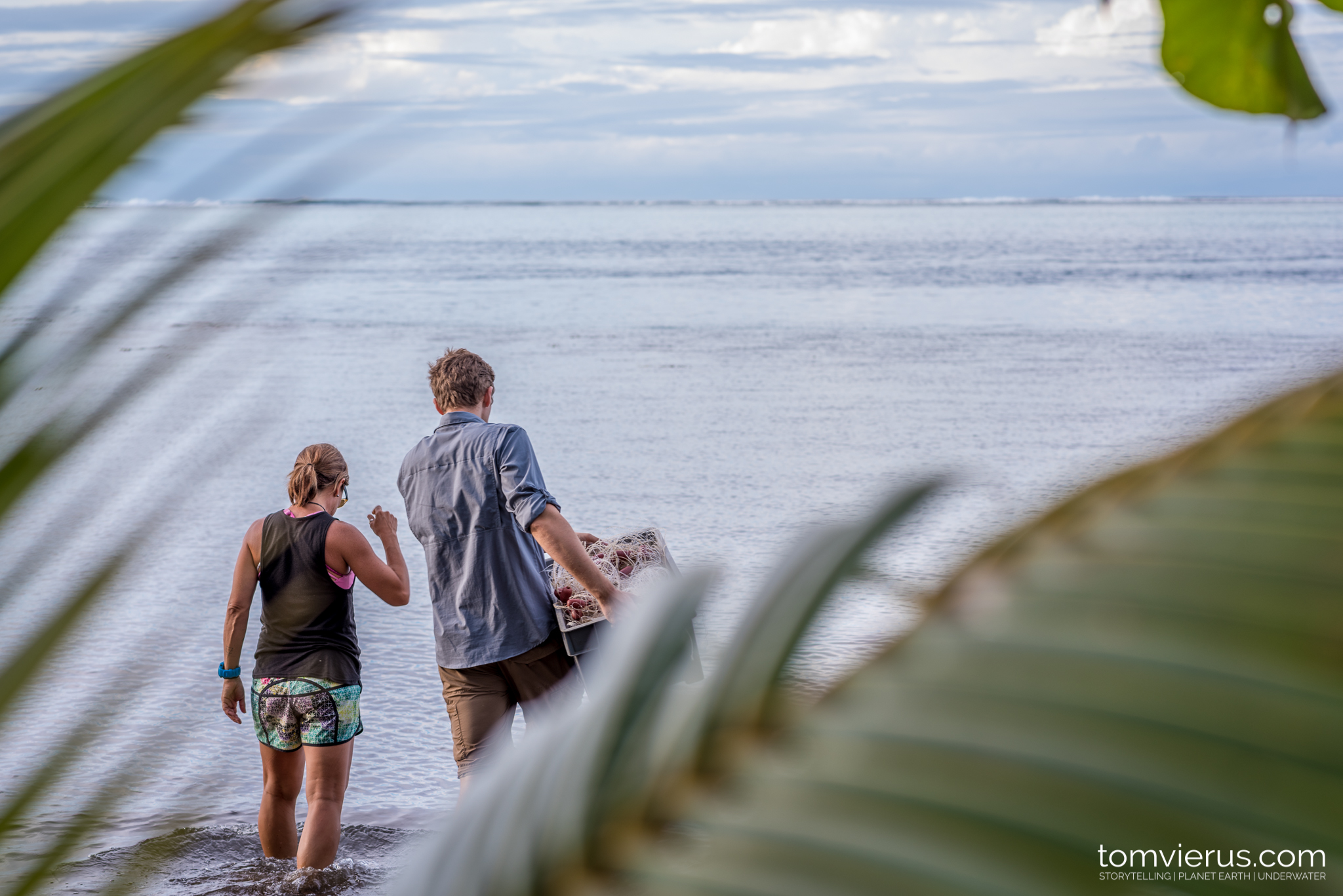 Jodie and Ian deploy the gillnet for another evening of fieldwork. 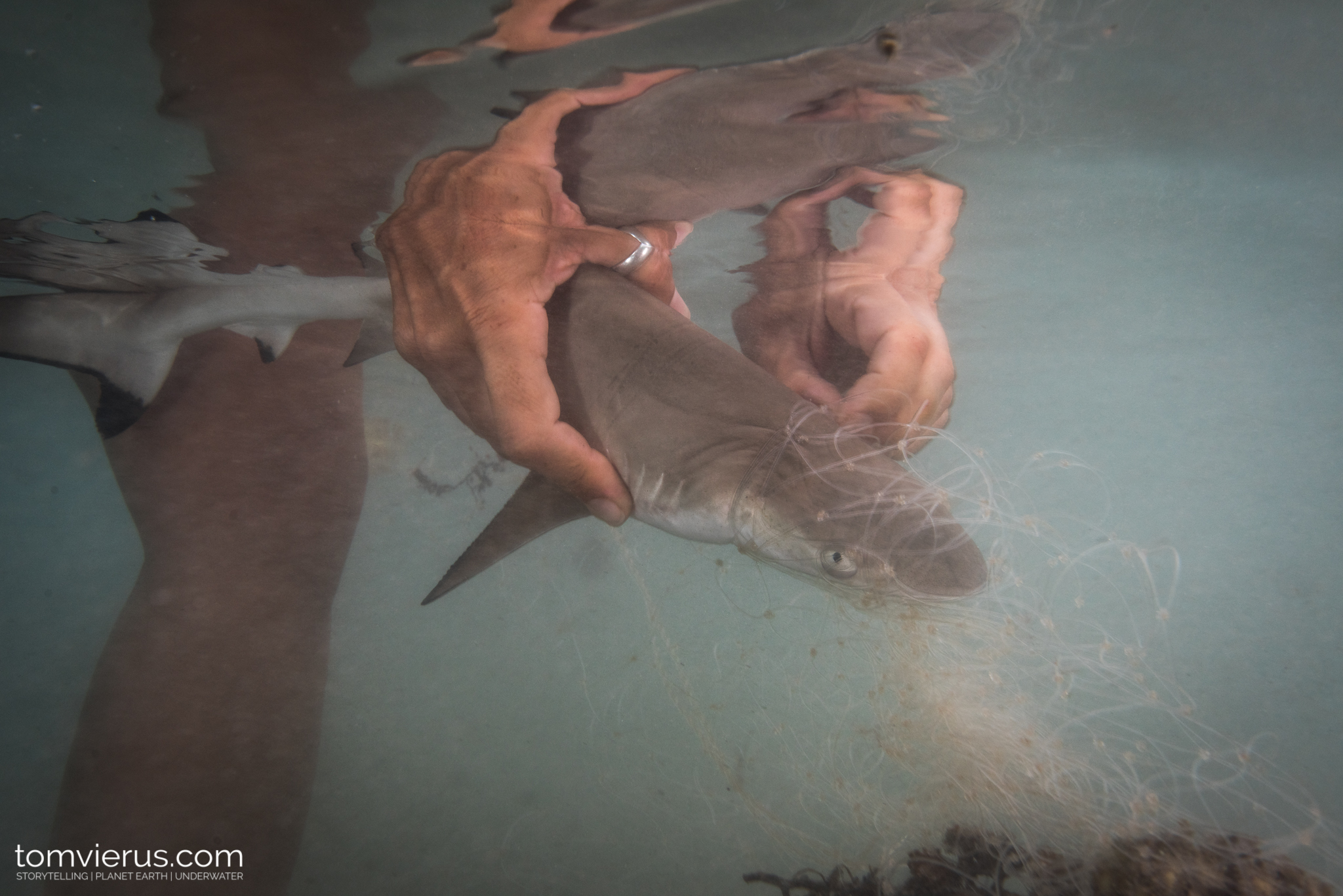 All of us are well trained to free the sharks as soon as possible after they entangled themselves in the net. 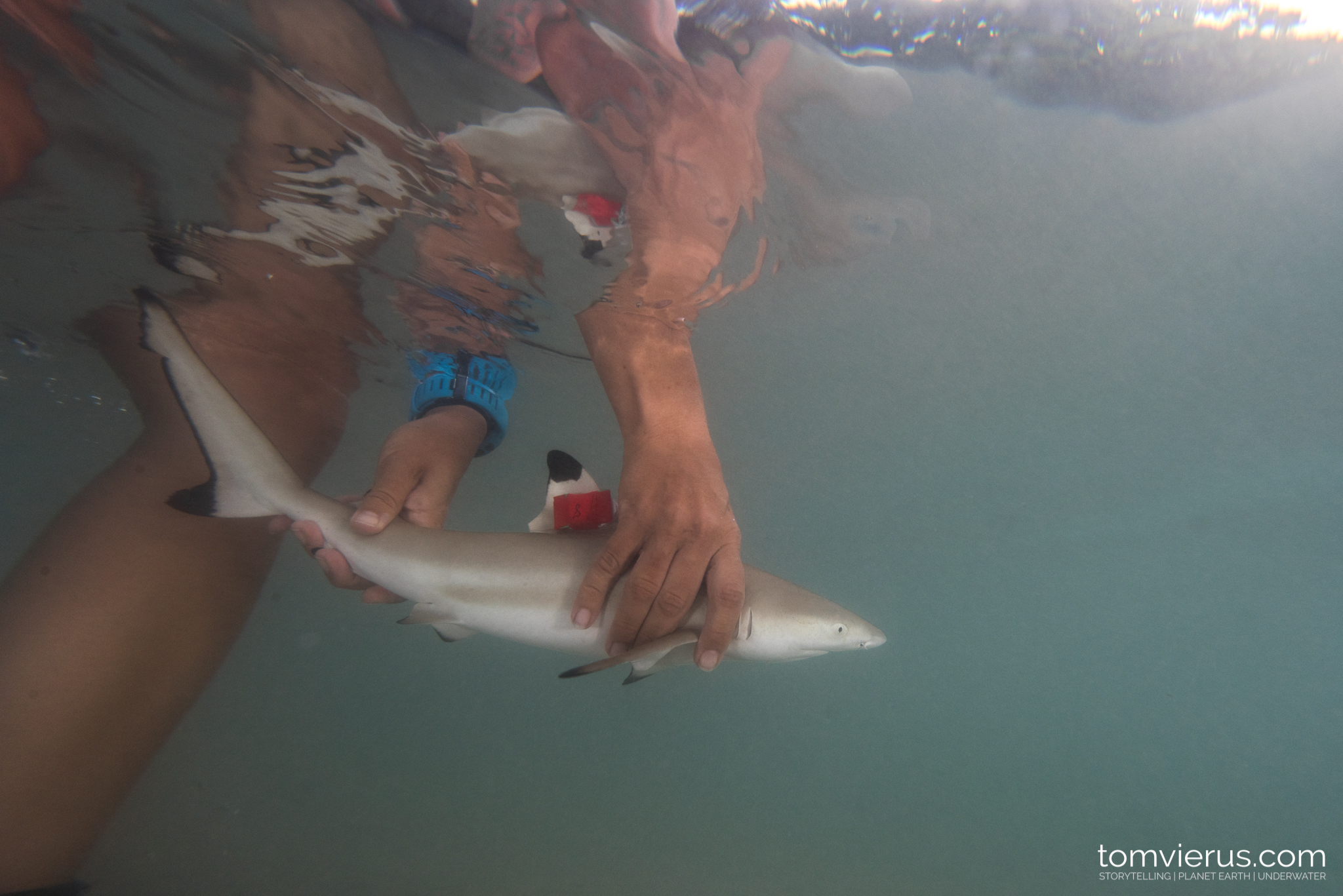 A blacktip reef shark with a temperature data logger is being released. The device will record the temperatures that this individual will be swimming in.

Over the last two weeks, I have launched a physioshark Instagram account and a Facebook page (head over and hit follow/like) both of which will continue to report on the project and their findings with awesome images coupled with a lot of information around shark science and the corresponding fieldwork. 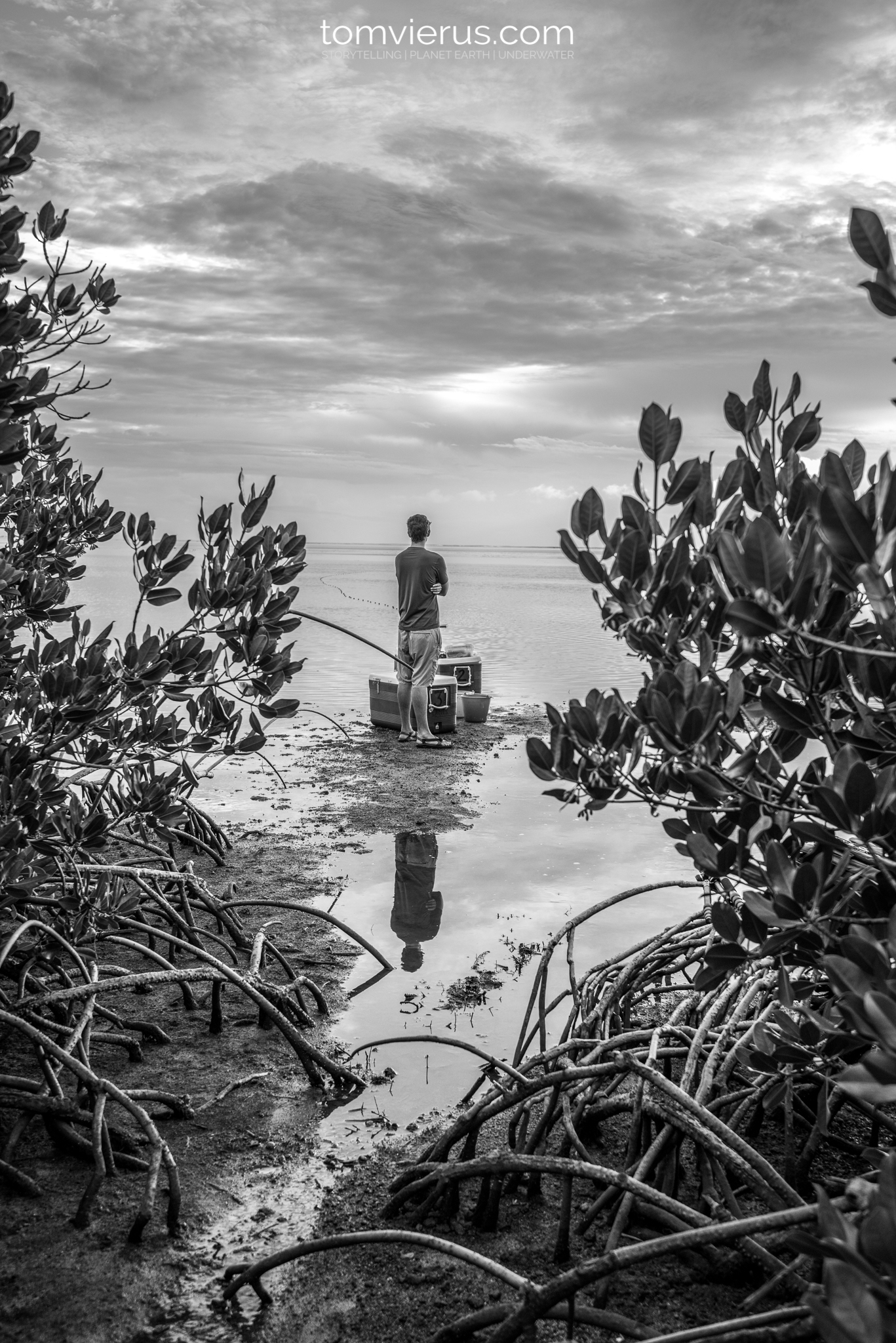 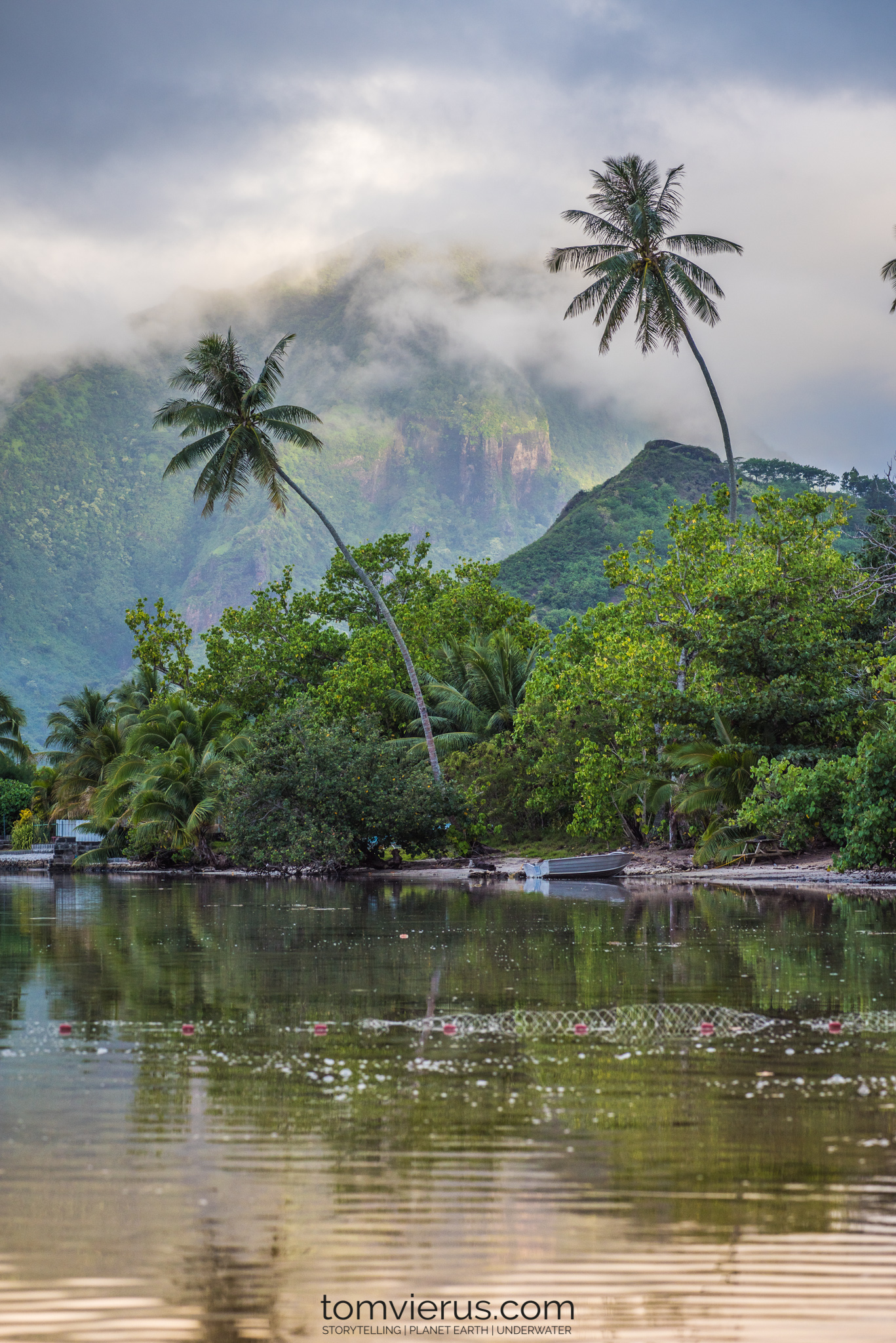 About a week ago a fourth member of this year’s physioshark team has arrived. Isabel will take over the outreach and continue the work with Facebook and Instagram, besides pushing the local visibility and communication with schools, collaborators and other interested folks. 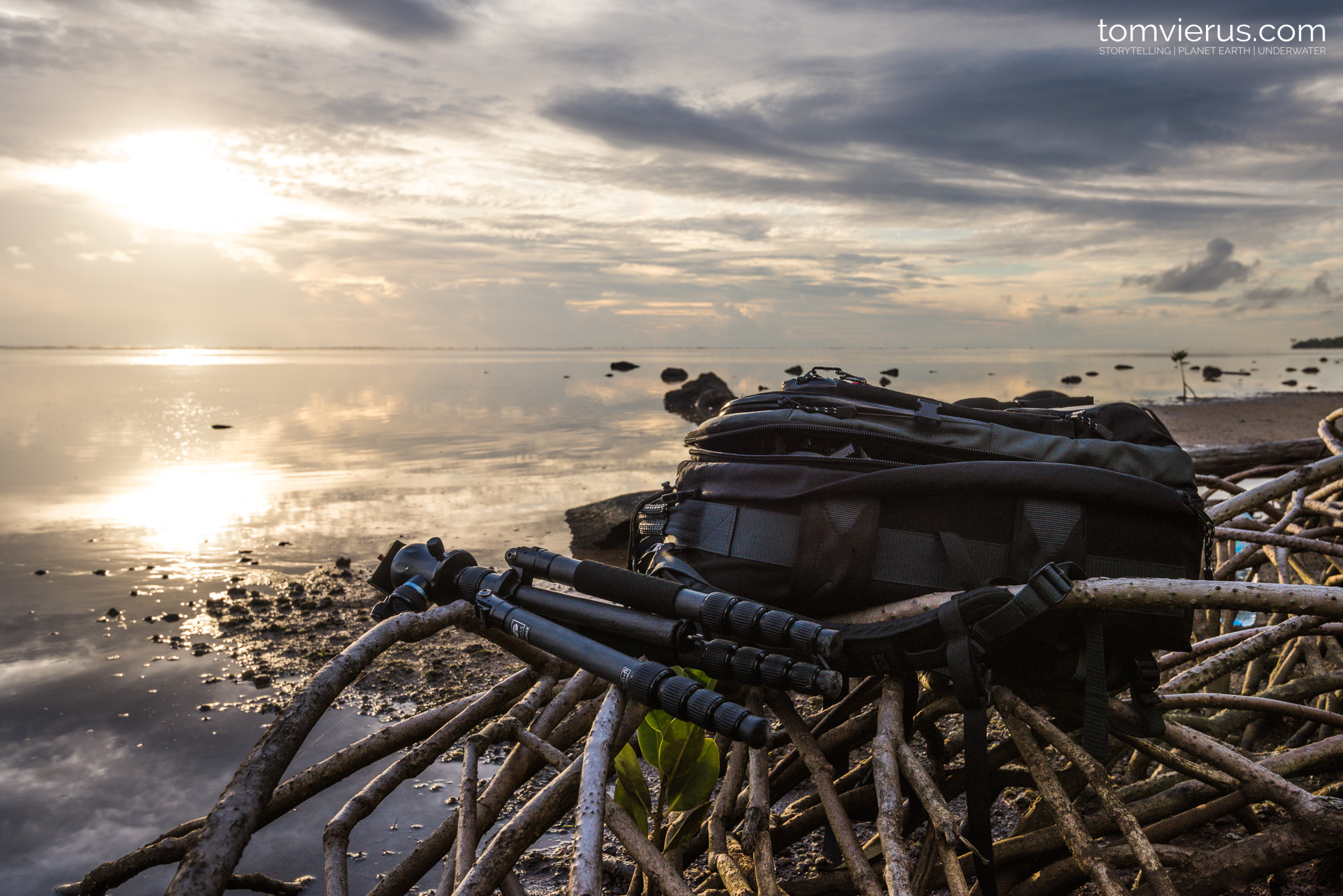 One of the biggest challenges for me as a photographer is to keep my equipment safe and especially dry in these harsh tropical conditions. High humidity, sea water and damp conditions don’t really go well with electronics. 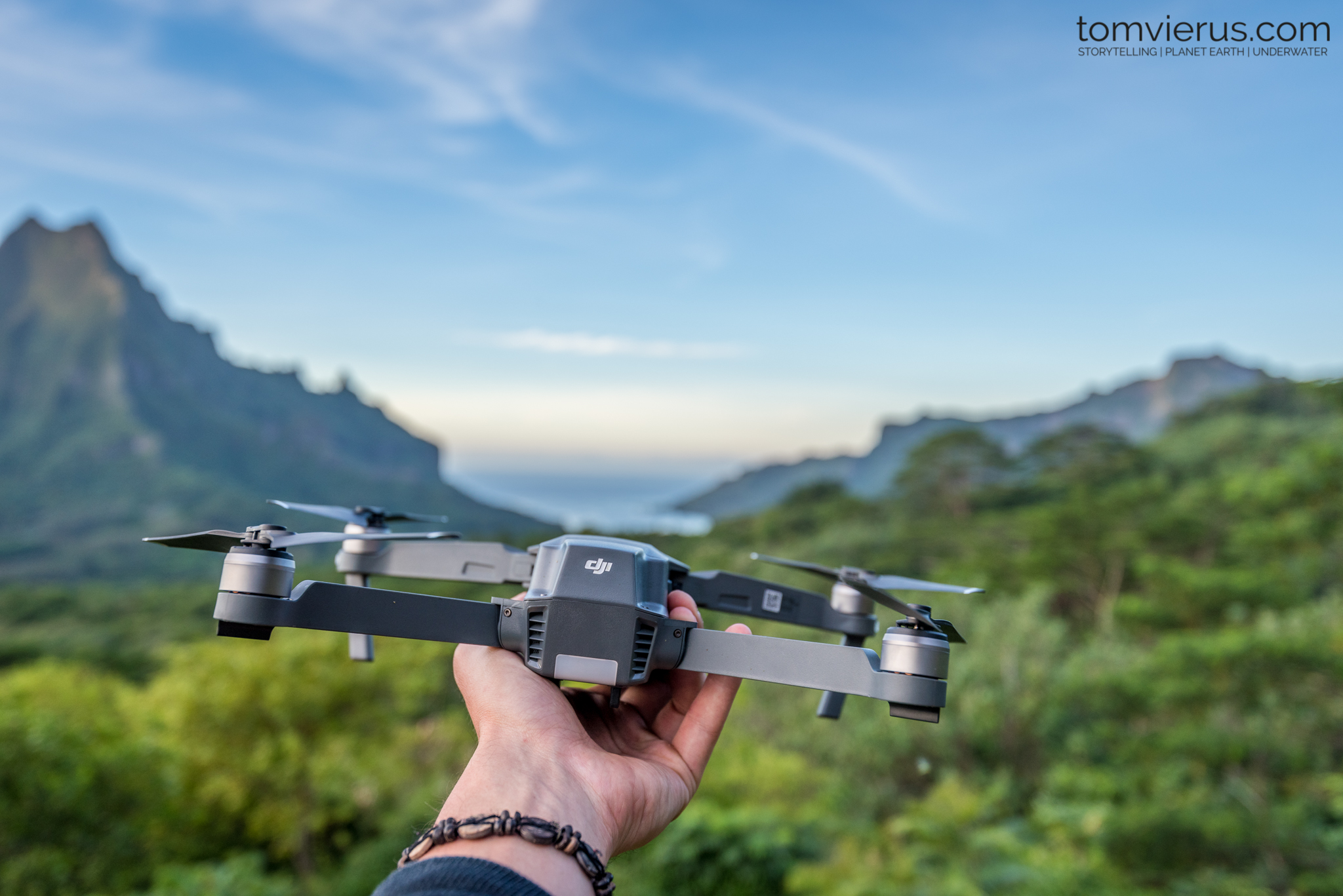 This little piece of technology is doing a great job here for me. Sure, there are compromises regarding image and video quality compared to its bigger brothers, but nothing beats its size.

One thing is for sure: the message on the importance of shark science and especially investigations focusing on their possible adaption to stressors induced by climate change (i.e. warming oceans) will be spread far and wide. And that will only help the conservation of sharks. I am happy and proud to be part of that and to continue my work I have been doing over the past few years by spreading knowledge on sharks and fighting their public misconceptions. The best way to build a lobby for these incredibly diverse group of animals is to spread awareness to young and old people alike, fascinate with facts and great images and replacing long-hold yet wrong beliefs with accurate pieces of information. 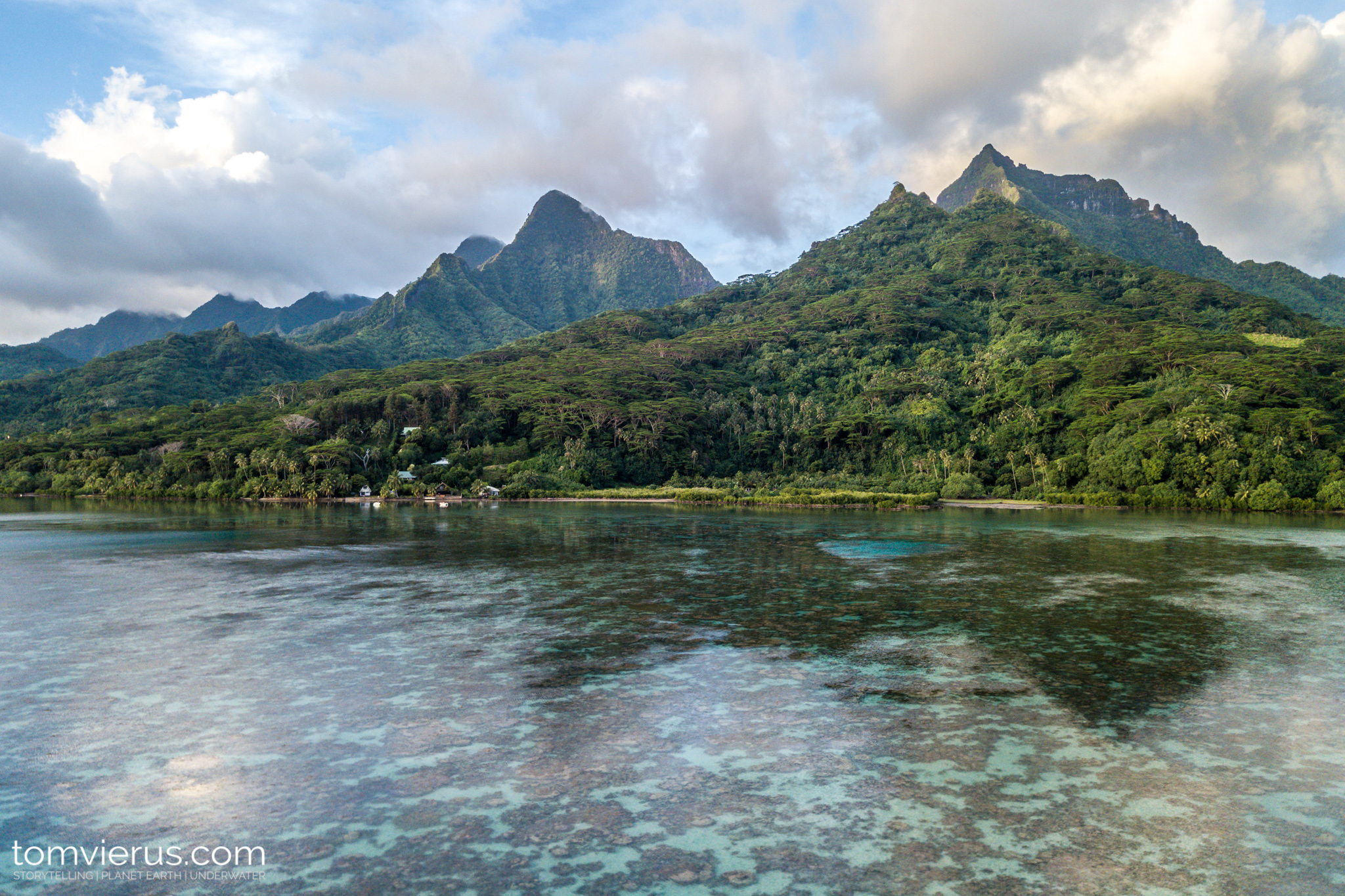 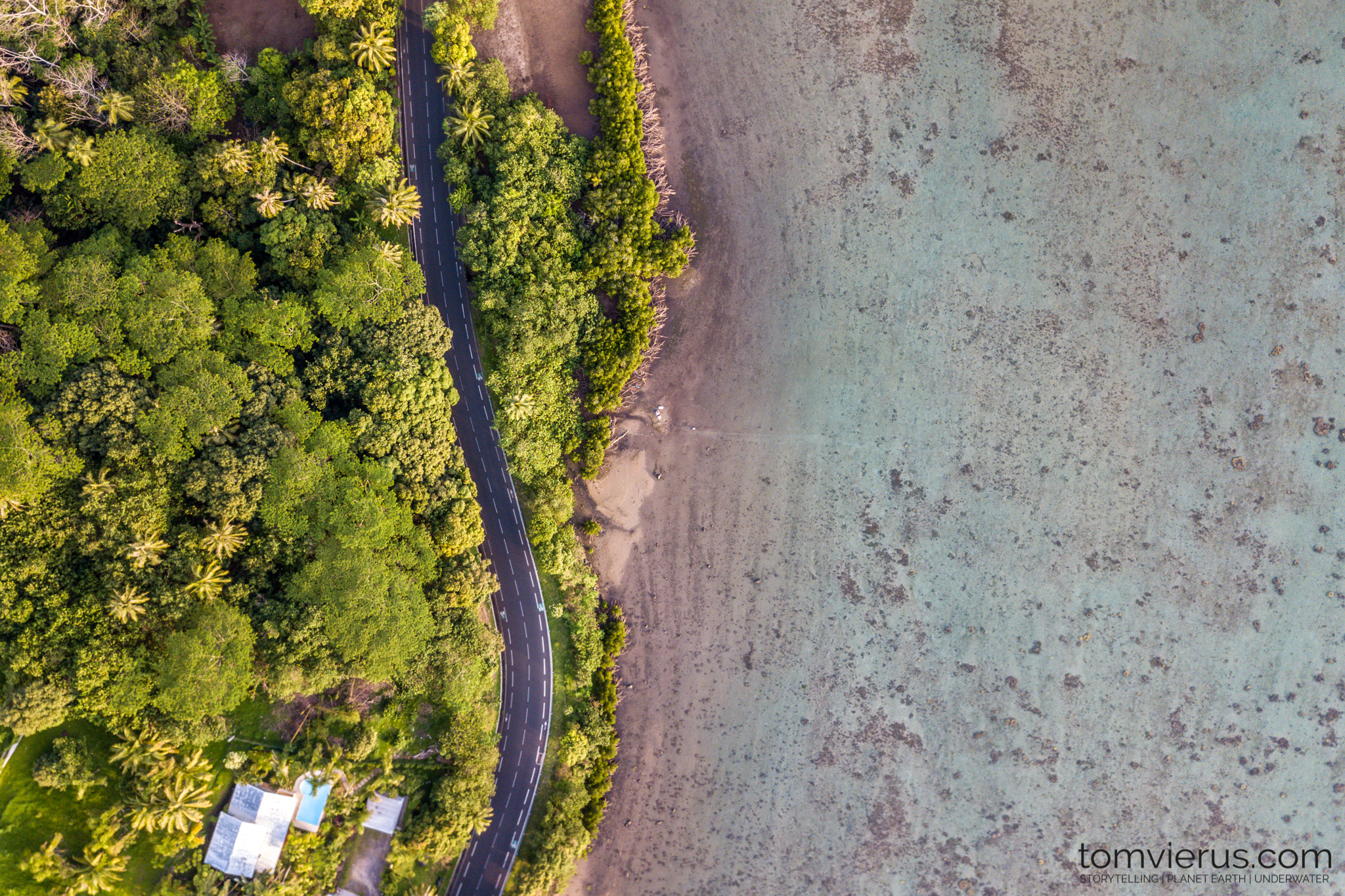 The 100th sharks of this season

While in the field two days ago, Ian announced some good news just after releasing a newborn blacktip reef shark: we had just caught the 100th shark of this year’s fieldwork season! The more sharks are being caught and released the better, simply due to the fact that more data will eventually draw a more detailed and accurate picture of the situation here on Moorea.

We also conducted three nights of respirometry experiments measuring the shark’s oxygen consumption right after a stressful event (maximum consumption) and observing their recovery time back to normal rates. This was done with three different temperature treatment groups (28°C, 31°C and 33°C). Each of the sharks had been living in their respective temperature tanks for weeks here at the CRIOBE at the inner tip of Opunohu bay. We will have to be patient and wait a bit longer for the results, until Ian will have analyzed it all and consequently prepare the results in a publication. I am already looking forward to it!

Ian sets up the respirometry chambers and makes sure everything works. 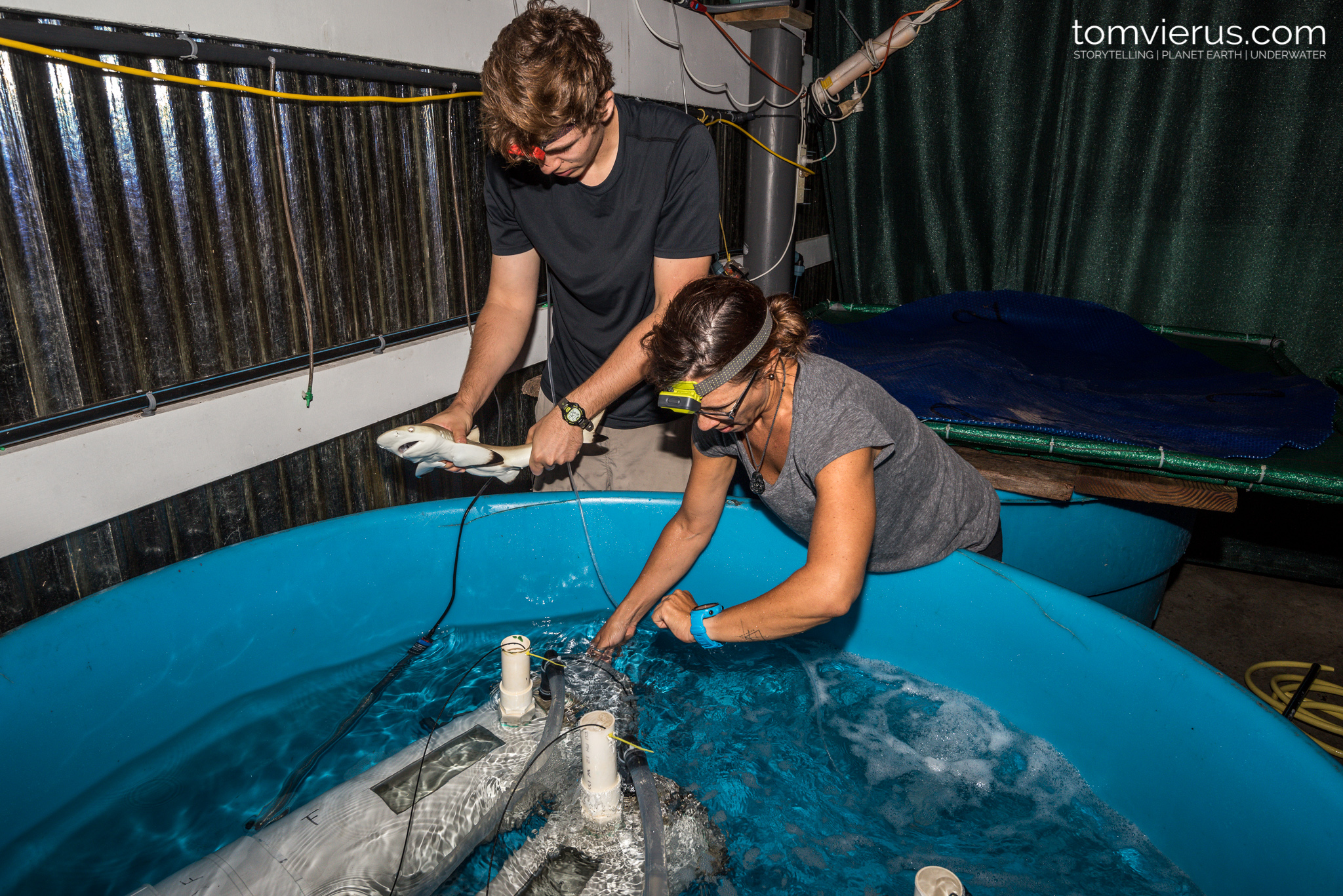 This blacktip reef shark is just about to be put into one of the respirometry chambers to survey its oxygen consumption. Everything has to be planned to the second to ensure the well being of the animals.

Almost everything about sharks for me here on Moorea..

… but not quite all. I have been snorkeling twice now in a nearby freshwater stream capturing the stunning – and to my surprise – very abundant fish and crustacean life. I have too many good images already to just include one or two here, so I will write up an article on my experience and include a whole range of photos. It somehow struck me, that I myself, wouldn’t have had the idea to just take my housing, put the macro on my Nikon D810 and have a snorkel in the stream not even a 100m away from the CRIOBE station. Thanks to Till, who has now left the station but used to take care of the aquariums here, I gave it a go and was thrilled right away. Sometimes the best shots are simply in front of your door and can easily be overlooked. I guess the lesson I take home from that is, that if you don’t try, you won’t know. 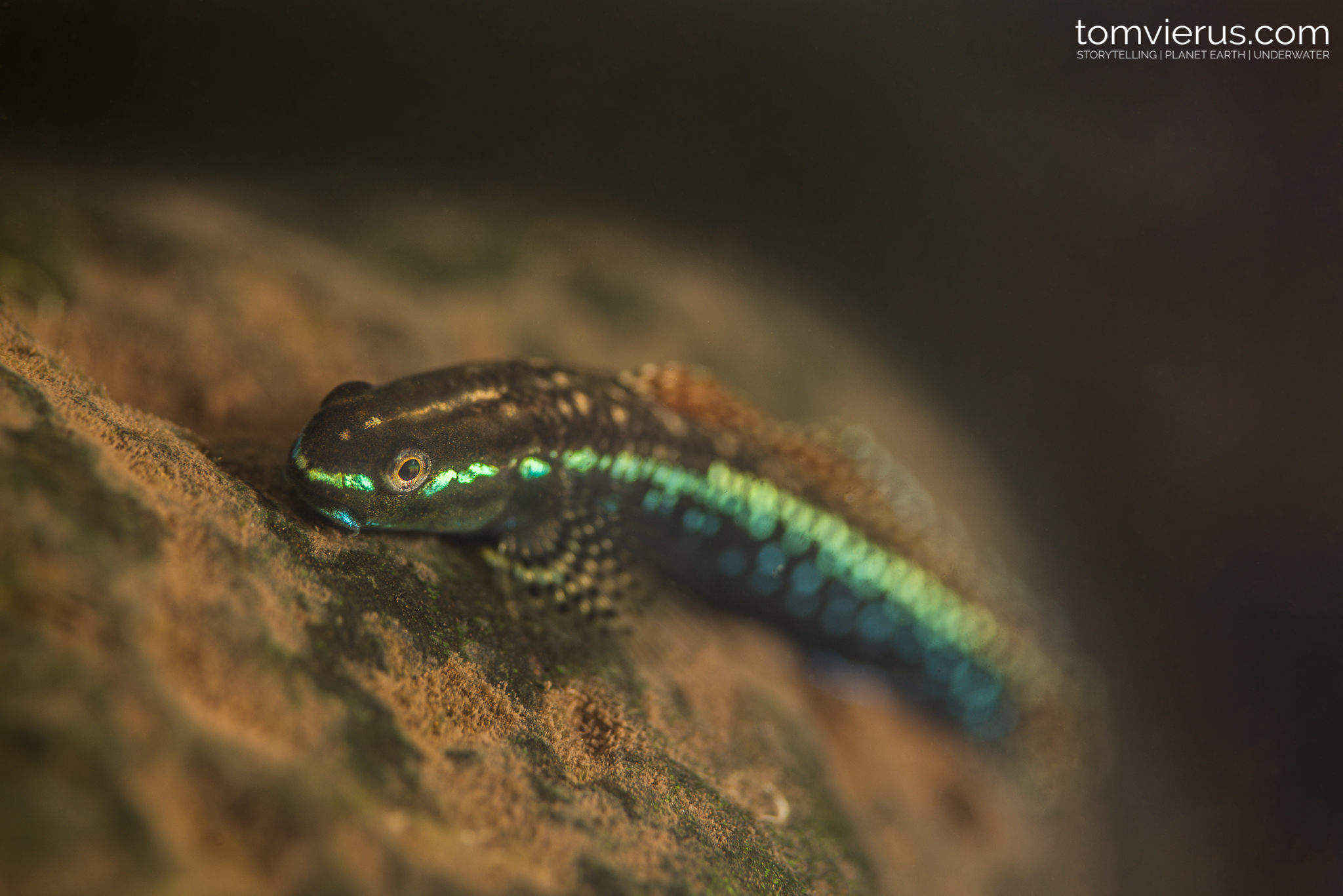 One of the beautiful a freshwater fish I photographed in the nearby stream. 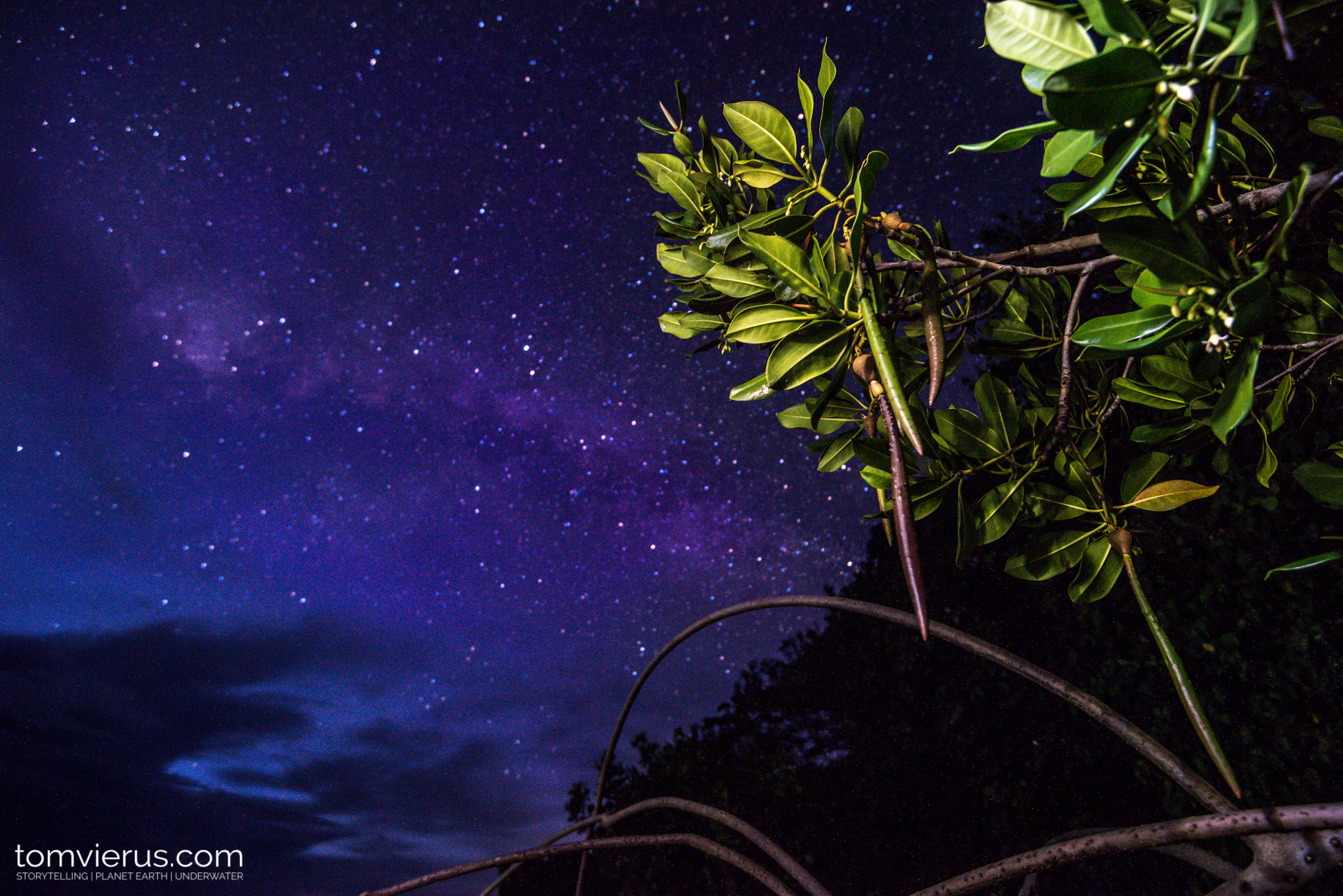 Mangroves are important habitats for many fish species inlcuding some sharks.

Joining other researchers might teach you a thing or two

I was lucky enough to stick my nose into some other researcher’s work, such as the cleaner fish research Rui Rosa and José Ricardo Paula were conducting here on Moorea. These guys worked (just as almost everyone else here) tirelessly in the field, catching, observing and releasing these very cool and totally underestimated fish. 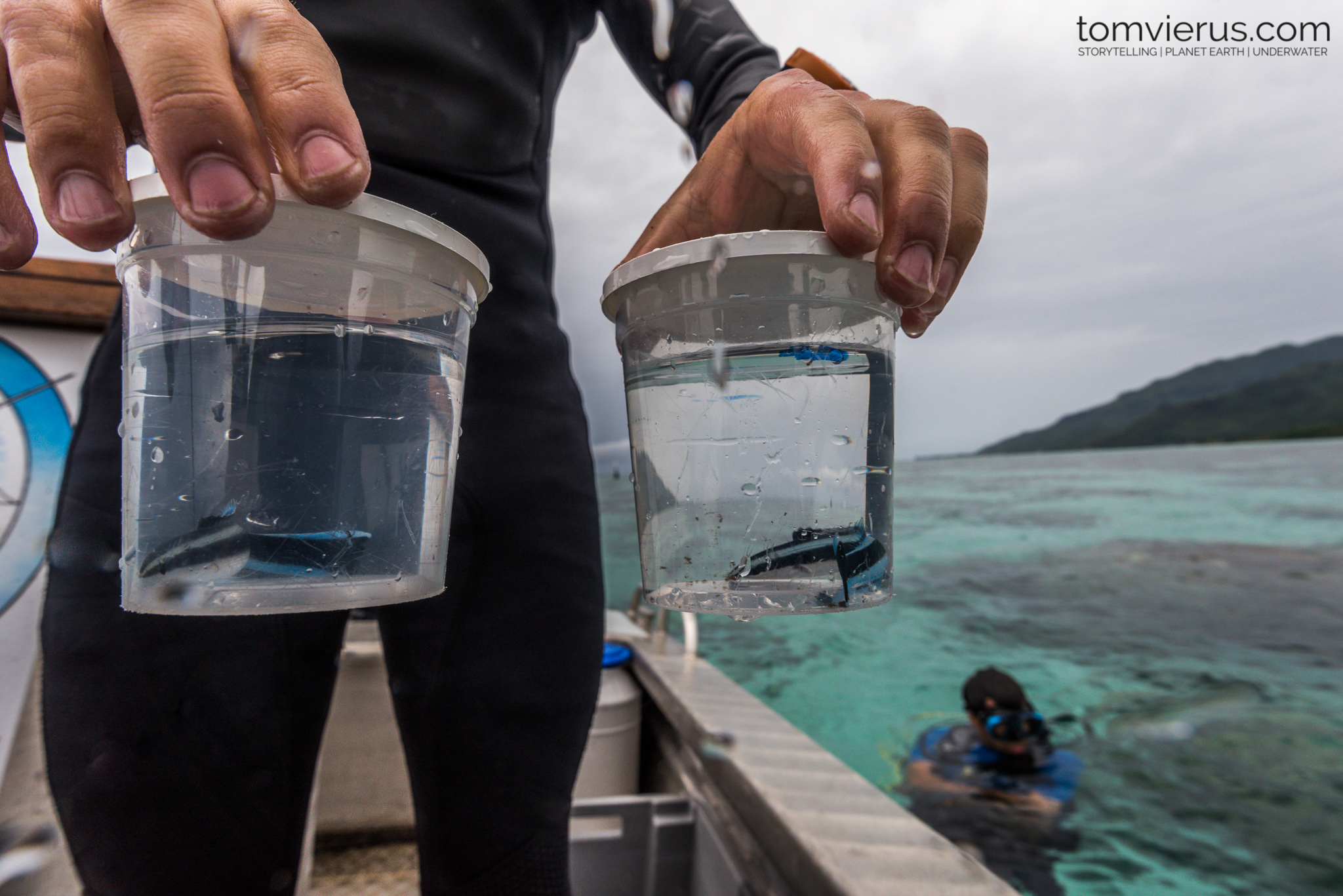 These cleaner wrasses are just about to be released back on the reef and will be filmed for 30 minutes right after. The footage will later help the scientist describe their behaviour.

They made me aware of a few facts, that I had never known about. Did you know, that some cleaner fish ‘massage’ their clients (I found it hilarious in the first place, that the fish being cleaned are called ‘clients’) with their fins? This way the cleaner fish lower their potential client’s cortisol levels and thus decrease their stress making them more prone to some cleaning action. Similar to us humans, isn’t it? Who doesn’t enjoy a massage to get rid of some of our all everyday life stress? I really appreciate possibilities like that and learn something I didn’t know about. And they got me quite excited about cleaner wrasses!

A panorama shot of French Polynesia’s capital Papeete taken from Moorea. I stitched that one together out of seven or eight images.

Jodie and I also had an incredible morning snorkel with a mother humpback and her calf after being not quite as lucky at the first time trying to see these impressive mammals in the water. Surely, one of the memories that I will carry with me for a very, very long time. 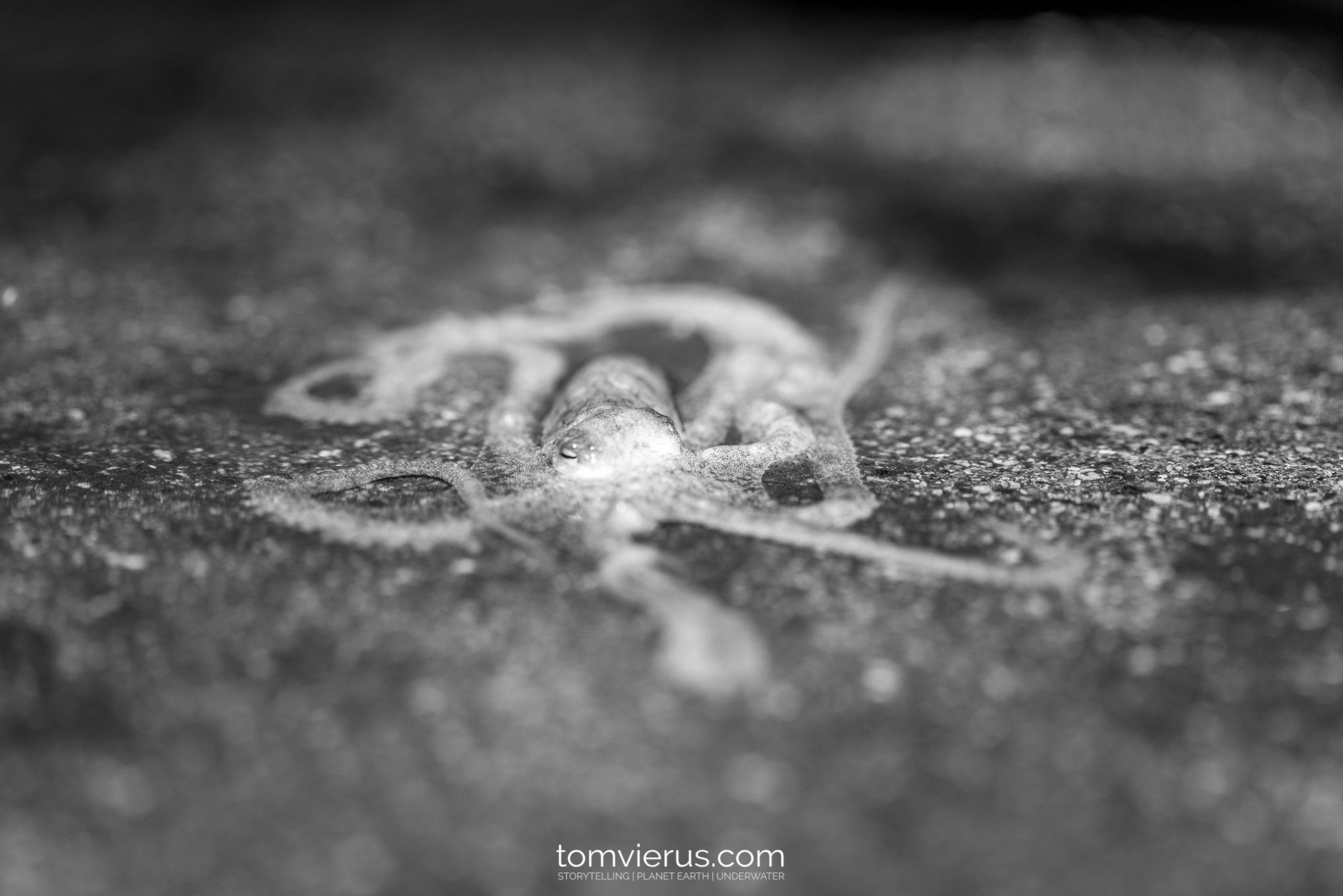 This little baby octopus visited us on one the fieldwork night in super shallow water. 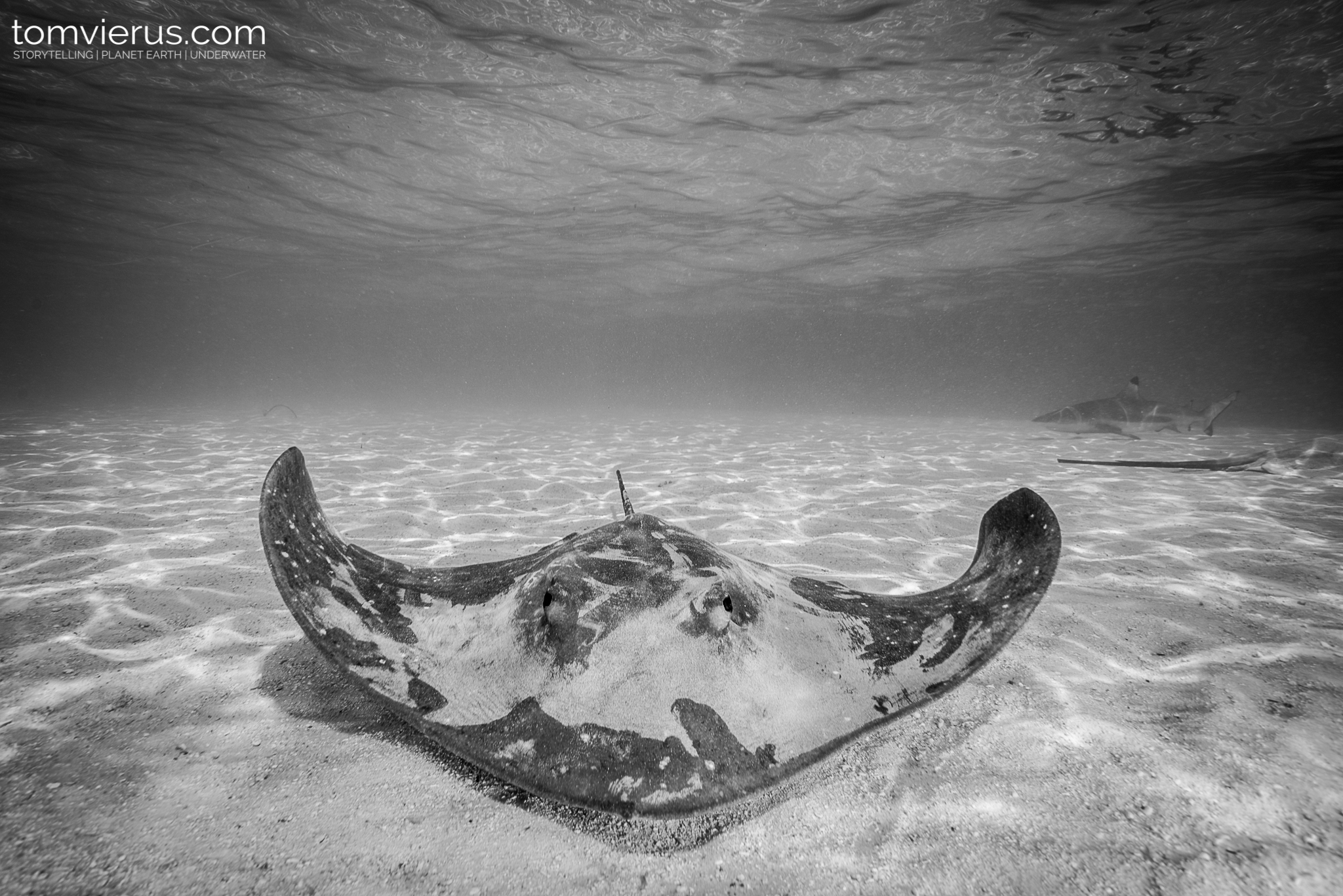 Then again, I still haven’t met one of my favorite underwater animals – the tiger sharks. But there is still time to make that wish come true. Two more weeks to go, before I’ll head back to Bremen and start planning coming expeditions and adventures. I am already quite excited for 2018 and I have to say, 2017 has been a great year for me. But I guess, it is a bit early for a review, so I keep that for late December and make this year even better until then. 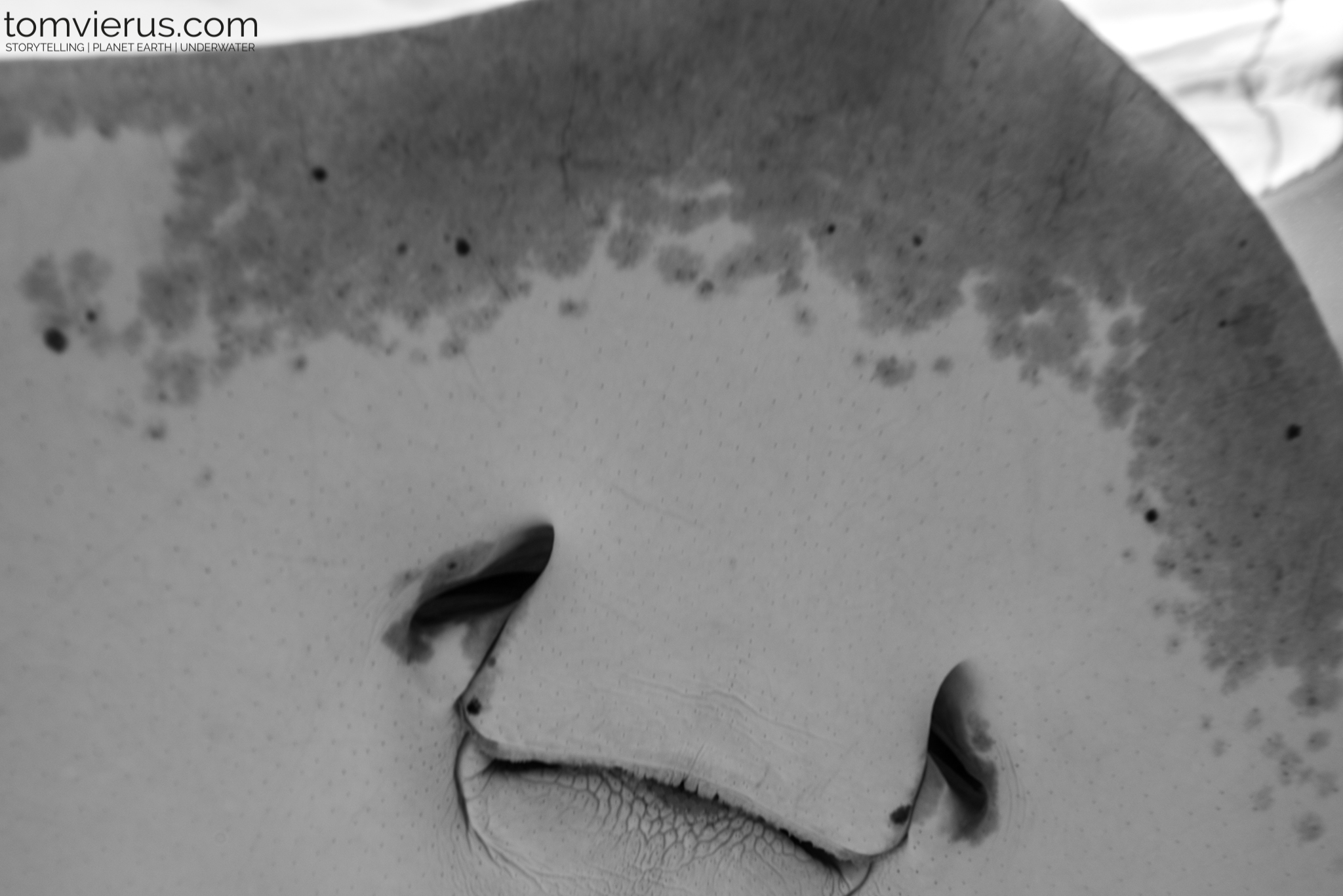 Ever seen a pink whipray from below? If not, here you go 🙂 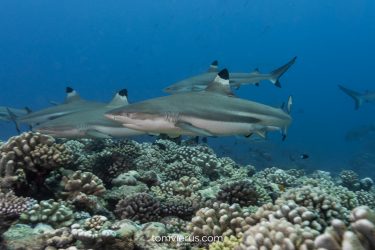 Maybe a couple dozen blacktip reef sharks can be seen at the water surface circling around our little boat. Fully equipped...