The day after Gülsah had left I moved into the RSEC house in a different part of Dahab, as the Dahab Reef Monitoring Programm was about to start. RSEC (Red Sea Environmental Center, for more Information see http://www.redsea-ec.org/) is a german/austrian organisation, aiming research, education and conservation of the red sea. We volunteers are living in a house a bit outside the busy tourist strip (well right now there aren´t too many of them anyway..) and only a couple of minutes away from our office, which is situated on top of the sinai backpackers diving Center.  The house itself  is huge: two stories and four bedrooms, three bathrooms, two big livingrooms,  a kitchen and a garden. Unfortunately it is very dark, as the windows are really, really small. It´s got lots of potential, it just needs a bit work to get it more comfortable and cosy 😉 I think this will be our task today – it´s our first day off .. 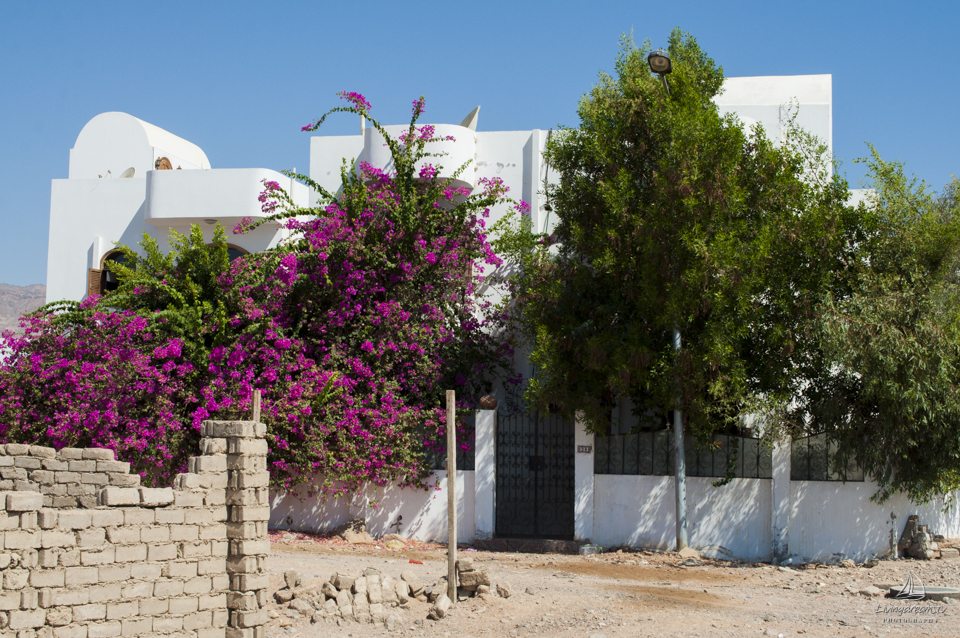 Right now we are actually seven volunteers living in here, of which four, including me, are participating in the Reef Check Program. And I think there´s one more coming in two or three weeks time. Actually we were supposed to be around 10-12 for this project, but due to the situation here and the following cancellations of flights the people didn´t come here (better for us – the less divers under water the better, though we might not be able to obtain as much data as they used to in the past..) The program itself started on friday. Since then Nina, kind of  our “team leader” has held a few presentations  and we´ve watched a couple of videos about Reef Check and of course we´ve dived at least once a day.

What is Reef Check?

Reef Check was launched in 1996 to improve the methods of reef surveys. Until then there was no standard method how to survey and investigate the condition of reefs and therefore obtained data couldn´t be compared. To make it even more efficient any eager volunteer should be able to participate and to contribute to reef conversation. Thus, a simple technique was invented which, after a couple of training sessions anybody could understand. Today, Reef Check surveys have been done in far more than 80 countries all around the world. 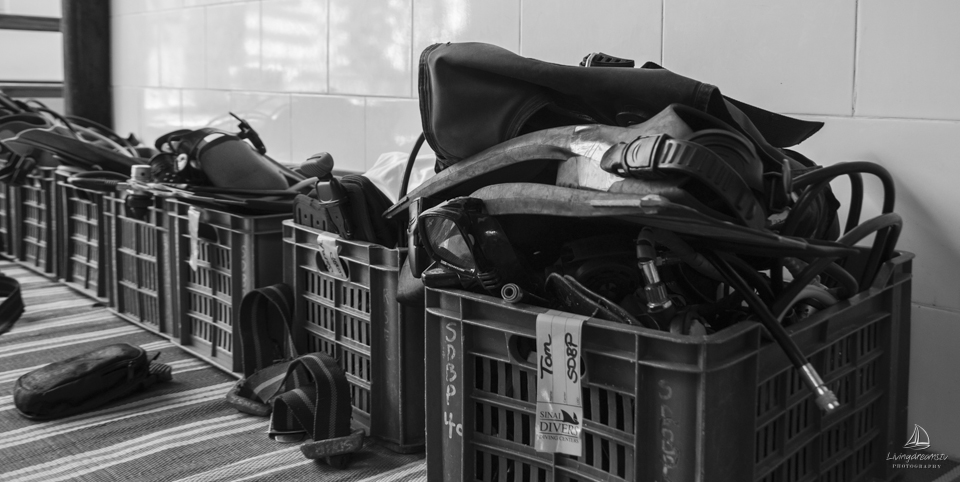 I just love putting together all the diving gear

How is it actually done?

There are several groups of indicators which are investiagted during the dive:

A 100m long transect line is placed on a reef (5m, 10m & 15m), which is divided into four different transects and four 5m gaps. This is important for statistical reasons. Using the transect as a center, a 5m wide area is observed by two divers for each category, one on the left, the other on the right hand side of the transect line. The fish survey team starts by counting the indicator fish and estimating the size, where it is required (indicators are fish which for example are  highly affected by overfishing). Then the invertebrate team does the same, looking for invertebrates indicators  (for example those targeted by local fisherman for food or for sale). The coral damage team then counts the corals of the same area and estimates their health by allocating them into differenet categories. Finally the substrate team determines the subsrat every 0,5m. This whole process is usually repeated in different dephts of the same reef if possible.

The one we are doing here in Dahab is a bit different – it contains all the indicators and methods of the standard reef check (9 fish indicatos,10 invertebrates indicator, 1o substrate categories, 9 coral damage categories), but in addition it is extended by 12 fish indicators, 8 invertebrates indicators  and 35 substrate categories. The past five days we´ve been training our beyonce (sometimes it is necessary to dive very close to the reef and and we obviously don´t want to damage anything) and had a lot of indicator practice (though we need much more :-)).  We have signals underwater to communicate to our dive buddies and to let them now, what substrate it is or what fish we are talking about. There are many of these Hand signals and they have to be learned as well. This is basically what we are doing roght now – at least one dive a day with lots of indicator practise. I think in a couple of dives we´ll be ready for our first survey dive 🙂 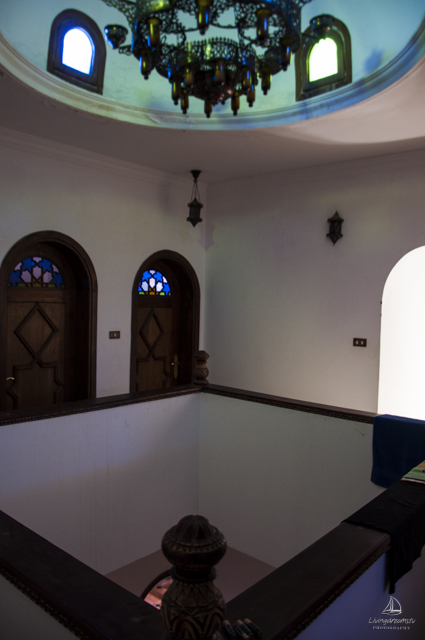 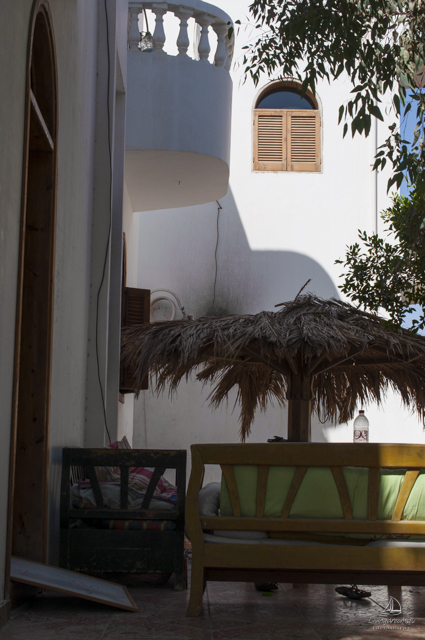 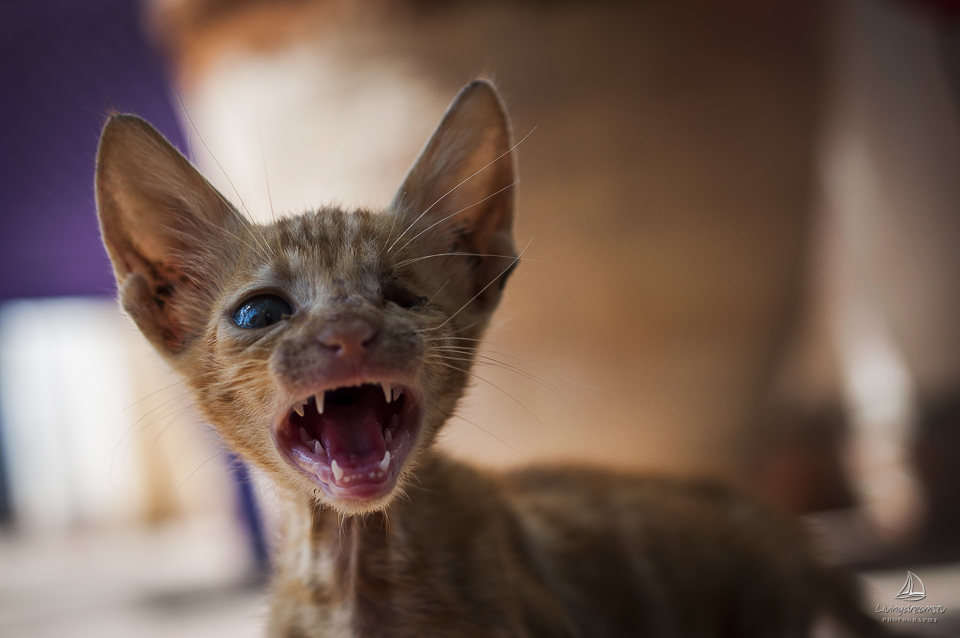 this is Malaika – we adopted this beautiful one-eyed cat 🙂 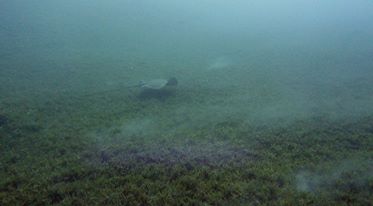 We saw this huge sting ray yesterday just here in Bannerfish Bay. Ité hard to see, but its wingspan was about 2m – 2,5m. Amazing Moment!
photo by Nanci Armas Martinez 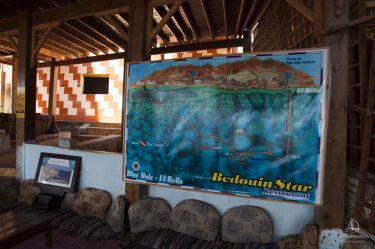 This morning was a very, very sad morning. Gülsah had to fly back home and we wont see eachother for at least seven weeks...