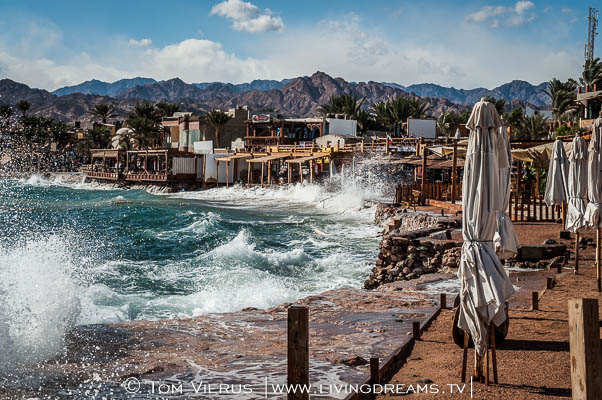 After Gülsah had left, I joined the Masbat Bay Conservation Projekct of RSEC (www.redsea-ec.org), which concentrates on the study of this beautiful Bay in the Center of Dahab, stretching from Mashraba in the South to Lighthouse in the North. The surveys lead to a better understanding of what is happening in the Bay and maybe to what more should be done in order to preserve it as we human beings are once again impacting it (what are we not impacting?) .

How does it work?

It is similar to the Reef Check procedure, which I´ve described here. We survey three different depths each point on the map: 5m, 10m and 15m. One difference to the Reef Check is that only 50m belt transects are used and only fish, substrat & algae coverage is recorded. Bannerfish Bay consists to a big part of seagrass. Boooooring! – might some of you think but that´s far off the truth. It is truly amazing what you can find there. As seagrass serves as a sanctuary for many species of fish, juveniles find shelter or food in this seemingly boring huge field of nothing. And there´s always the chance of seeing turtles, that just love to graze on the juicy blades of the Halophila stipulacea, the seagrass species which is covering most of the bay. 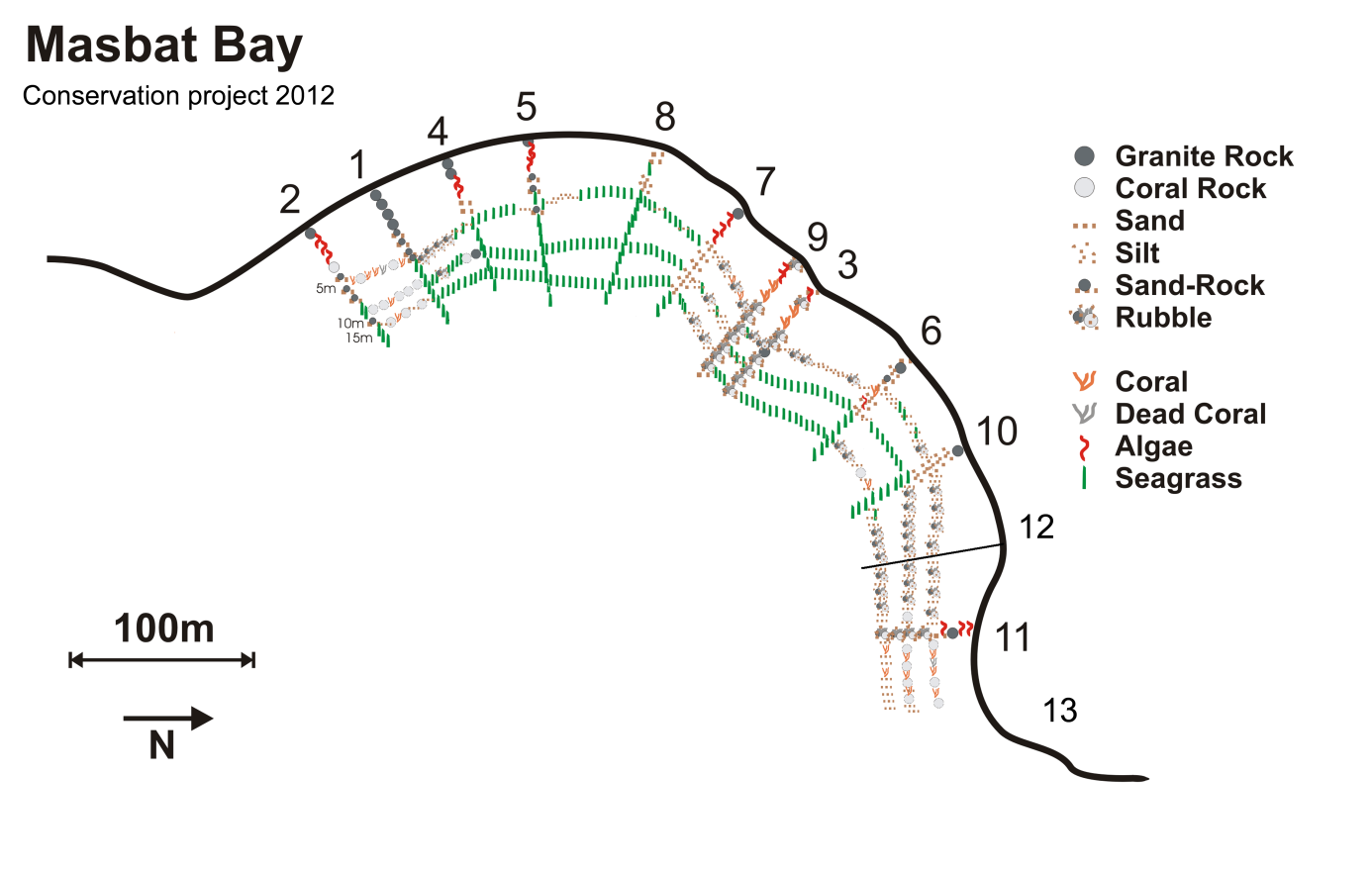 Masbat bay and the survey points and transects. Graph by RSEC Dahab

Three days ago we went for two dives in order to do surveys in 10m and 15m depths. On these particular dives, it was my job to do the algae survey, which means placing a 1m-stick on twelve random points on the transect and taking a photo. The data will be reviewed and worked with later, then we place a virtual square meter quadrat on the picture and investigate the algae abundance within this area. As the survey (usually) doesn´t take the whole dive, we have some time getting to the survey site as well as diving back to our exit point. On our way we encountered a seemingly injured Blackbanded Jack, which made quite an impressing appearing (size maybe about 70cm).

But not only did we find this extraordinary fish but also a ghostnet very close to shore. It was just drifting around and comleptely entangeled. Even though the net itself was not usable anymore it continue to catch fish. 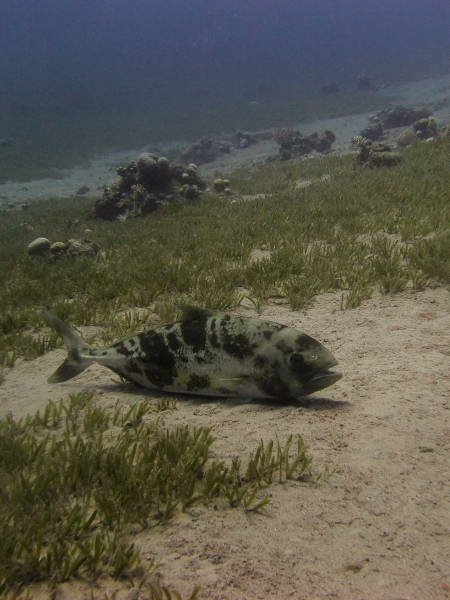 This is the Blackbanded Jack we found on our way. He stayed at the bottom and let us get quite close without making any movements. On the other side he had some bite marks of another fish. 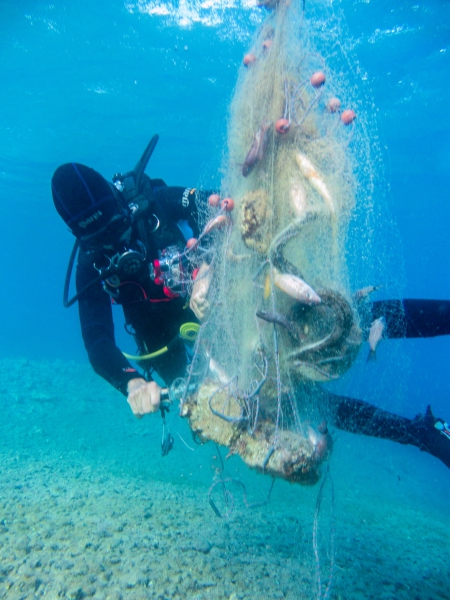 Jana trying to free some of the entangled pieces of rock and coral.

Fortunately Jana had a knife with her, so she cut the corals out the net as good as possible. As 70 minutes had passed, we all were a bit low on air and had to get out. We took the net with us into the divecenter and freed all the fish and other stuff that was entangled in the net. We counted 30 dead fish and three pieces of coral as well as one little crab, that was still alive. We recycled the net by cutting off all the weights as well as the small floating devices. It was just a very small net compared to the gigantic ones used in our oceans by huge trawlers, yet it was a sad sight. 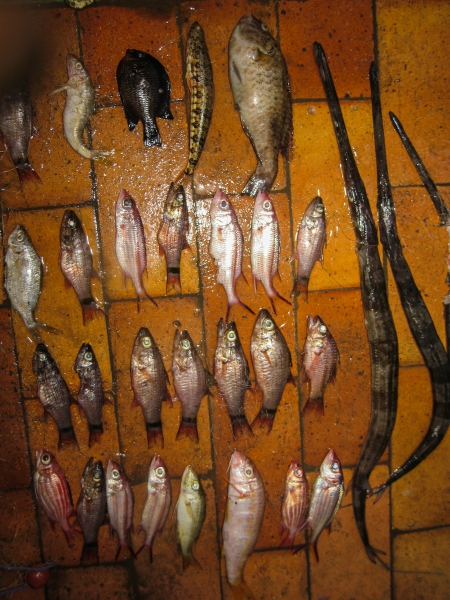 these are the 30 fish we found in the net.. photo by Nina Milton 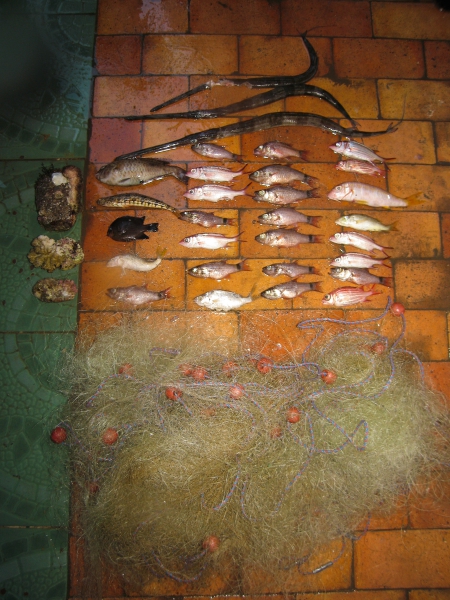 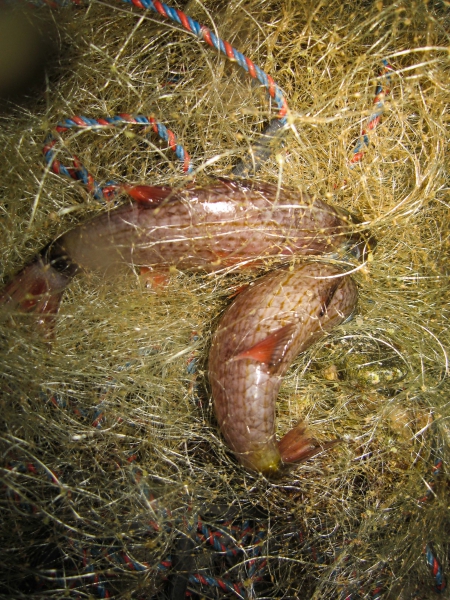 The fish have entangled themselves so badly, that even with a scissor it´s hard to get them out.. photo by Nina Milton

After this experience, I wondered what big nets might do to our oceans and I started reading about it. I found that this is a huge problem regarding the killing of fish and destroying our oceans and wildlife even further than it already is by „normal fishing“. Ghost fishing describes what happens, when derelict fishing gear „continues to fish“. (www.ghostfishing.org)

Fishing gear that is lost, abandoned or discarded, affects marine life until it is removed or destroyed. These nets are obviously built not to let fish escape and they continue to function this way even if they do not belong to anyone anymore. Small trapped fish attract bigger predators, that get entangled as well and die from starvation or even drowning (for example turtles, dolphins and seals). It is estimated that up to 30% of the caught fish worldwide could be caught by ghost nets.

Some nets might end up floating around (suspended by flotation buoys) killing thousands of animals. These nets form a vertical wall hundreds of meters long (for example the broadly used gill nets) and if not collected it keeps trapping fish until the weight of the caught fish exceeds the buoyancy of the buoys. The net then sinks to the bottom until the dead, trapped organisms are devoured and the buoys pull it up again and the cycle starts again.

There are various conservation groups out there going on expeditions to remove any kind of marine debris found. Even us here in Dahab find trash on every dive and us divers should take with us what we can. Floating plastic bags resemble jellyfish, which turtles love. The plastic trash congests their system and they eventually die.. 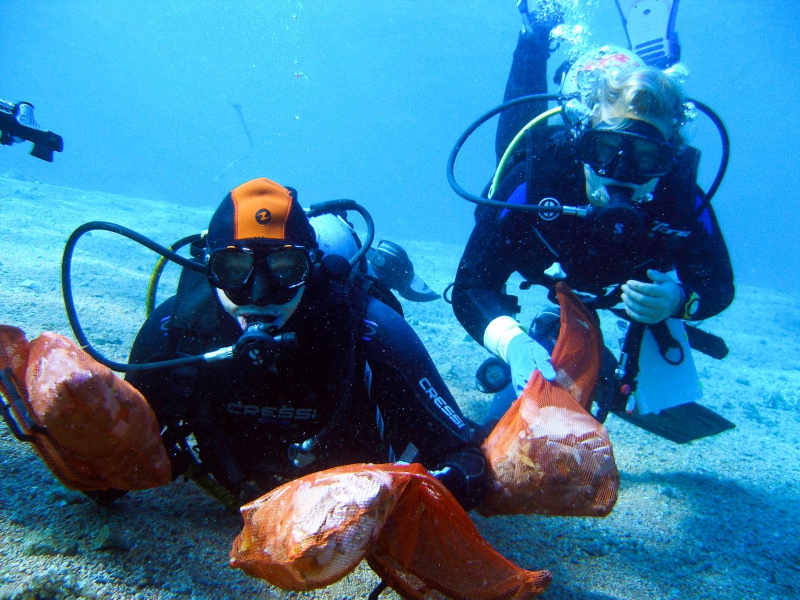 Collecting marine debris is one thing we divers can do – even if it´s not a lot compared to what is floating around in our oceans.. photo by Jana Slamaj

SO WHAT YOU CAN DO..

Be aware that purchasing fish from some companies makes you an active part of the industry, if you want it or not. If fish is on your menu, be sure only to buy sustainably caught fish and don´t eat it every day. Our oceans are getting dirtier every day and our fish populations are declining. I hope, that we humans will be smart enough to save what is left to be saved and to understand the impact we have on the oceans and the oceans have on our life and planet! Please spread the word to your friends and neighbors – the more, the better and the bigger the difference we are making!

Check out this video I filmed with my GoPro in Dahab! Our Oceans needs help!

Happy to read your appeals regarding preservation of the oceans! Hoping you’ll move as many as possible!
Nice to see you on RSEC home page!
With love
Dad

Thank you Dad, I hope so too! Not for myself, but for all of us..

These nets are illegal. The limits on Bedouin using nets inside Ras Mohammed National Parks are as follows:

Grid (mesh size) must be minimum 10cmx10cm. Net can be no more than 30m squared.

I have seen many Bedouin using nets over the years, but never with a legal net.

thanks for your comment! Yes indeed, this was an illegal net! The mesh sizes were way smaller than 10cm x 10cm! Are you living somewhere on the Sinai Peninsula)? 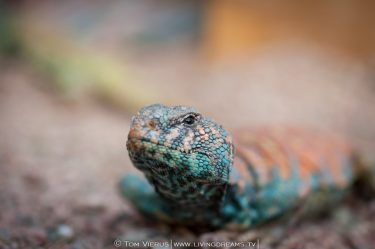 About two weeks ago Gülsah and me had a day out in the desert for her birthday. The guy living there kept two agamid lizards...