What makes me really sad… street dogs in Fiji

As some of the readers might know, my time living in Fiji is approaching five years in total – crazy! I have spent nearly a fifth of my life on this island in the South Pacific Ocean. And while I did and still do love many aspects of this country, the truth is that there are others that have become frustrating over time. Sure, if you move to any country of your own choosing, you do so with motivation, and I would expect that comes with a lot of love for that particular country (unless you’d only do so for a job that earns you a lot of money). 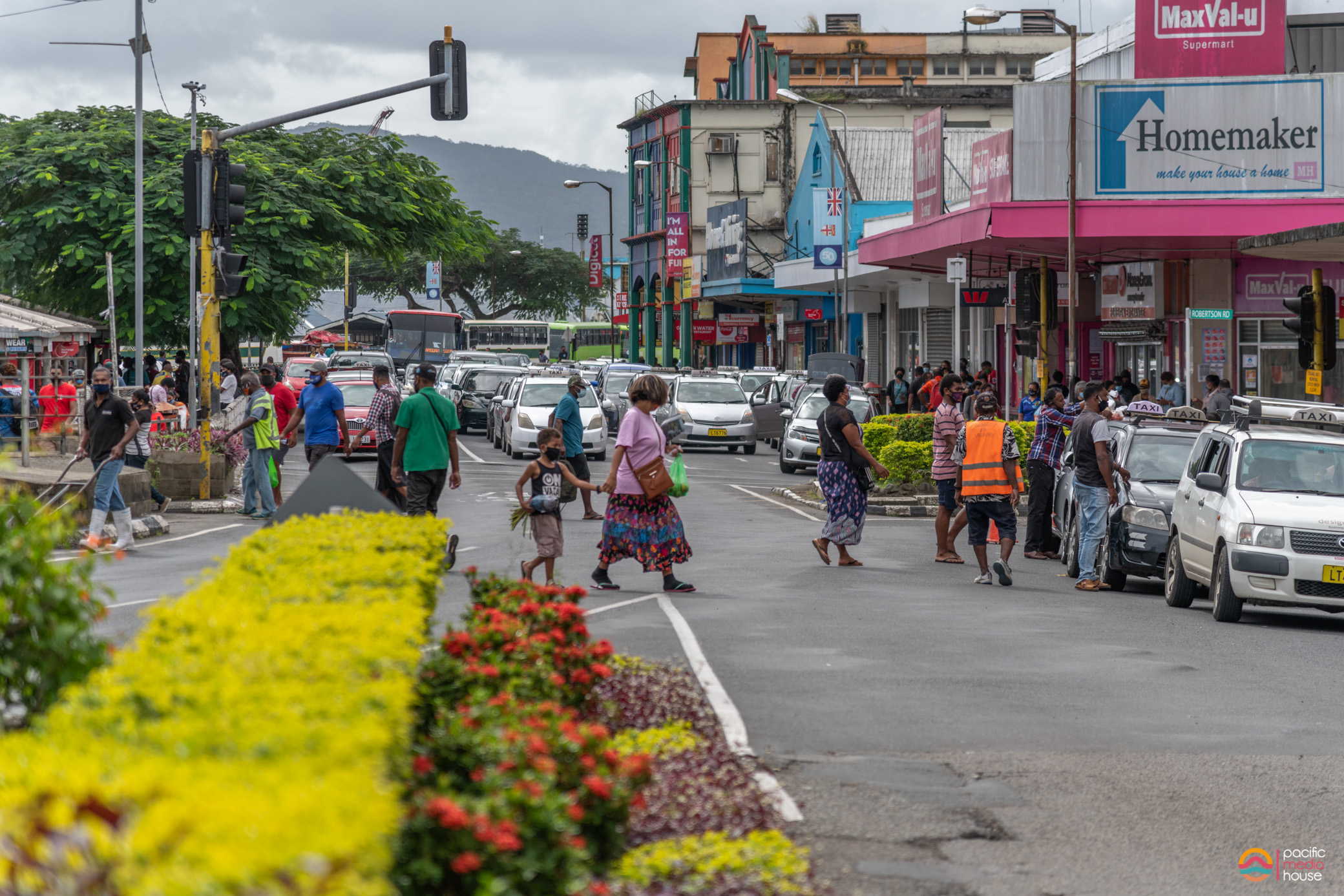 Truth be told, that has never been the case for either myself or Amanda. In fact, we are among the only ones in our friend circle that has chosen to live in Fiji without a well-paying job. We came back here in 2018 not having any job promises but instead came for our love for this country and with hopes and dreams of what we could achieve here.

Fast forward to 2022, and we are still here and have arrived at the everyday life that we share with any other human beings on earth once the first excitement of any new adventure has settled. As this post is not intended to touch any of my work-related issues (which would be a topic of a whole new post), I want to focus on why I wanted to write this piece. 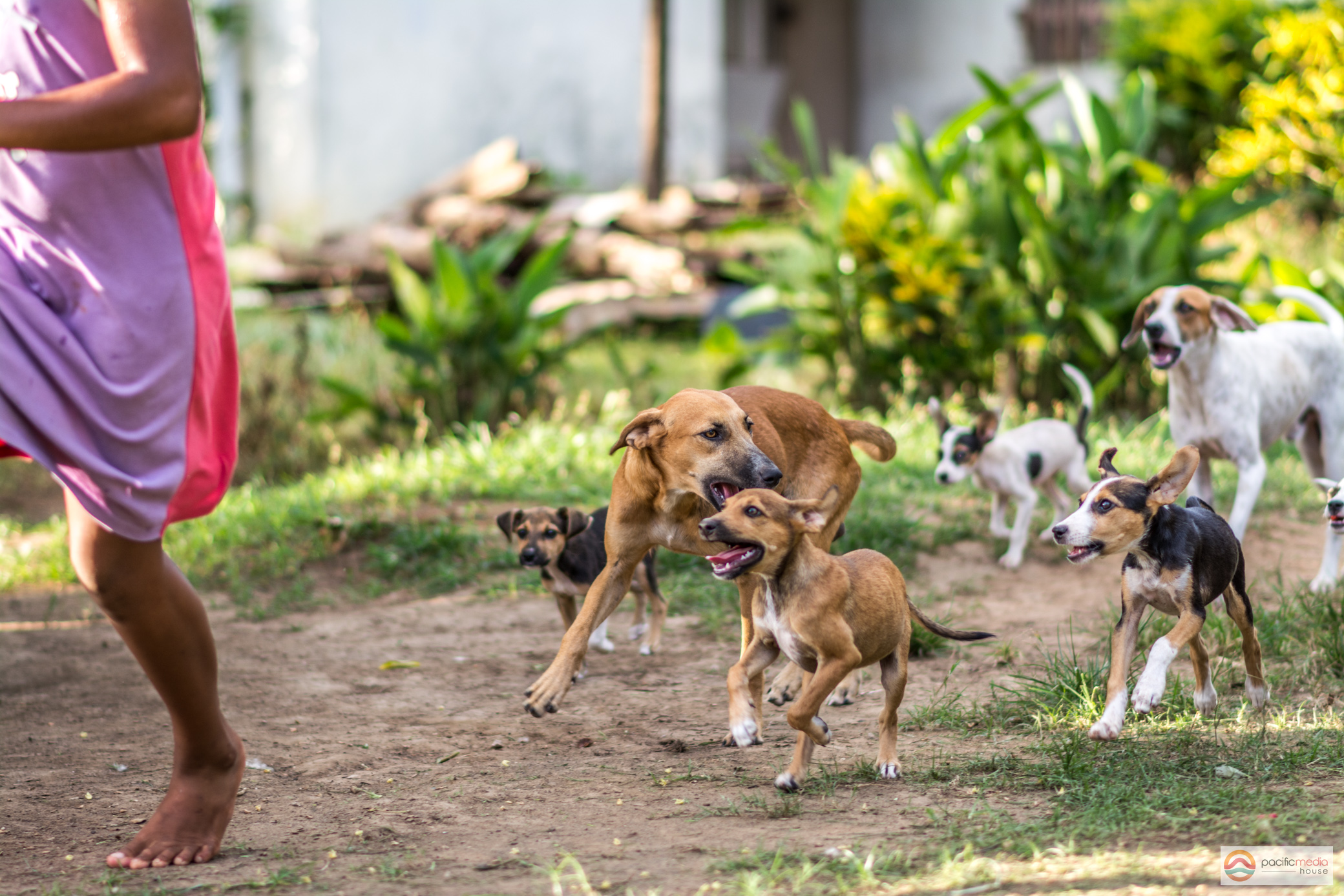 Several dogs playing with children in a Fijian village.

A love for animals

I am a person who has loved animals all his life. As a kid, I had two cats as pets, later my family had several guinea pigs and a rabbit, and I had several budgies over the course of my youth. Surely, indoctrinated by the society I have been brought up in, I also duly consumed animals. But of course, only the ones that my society (Germany) deemed “consumable” animals, such as chickens, pigs, and cows. Living without ever second-guessing that, I also never ventured into any thought experiments regarding the treatment of animals in societies in our world beyond the standard pet care that we in western countries are used to. 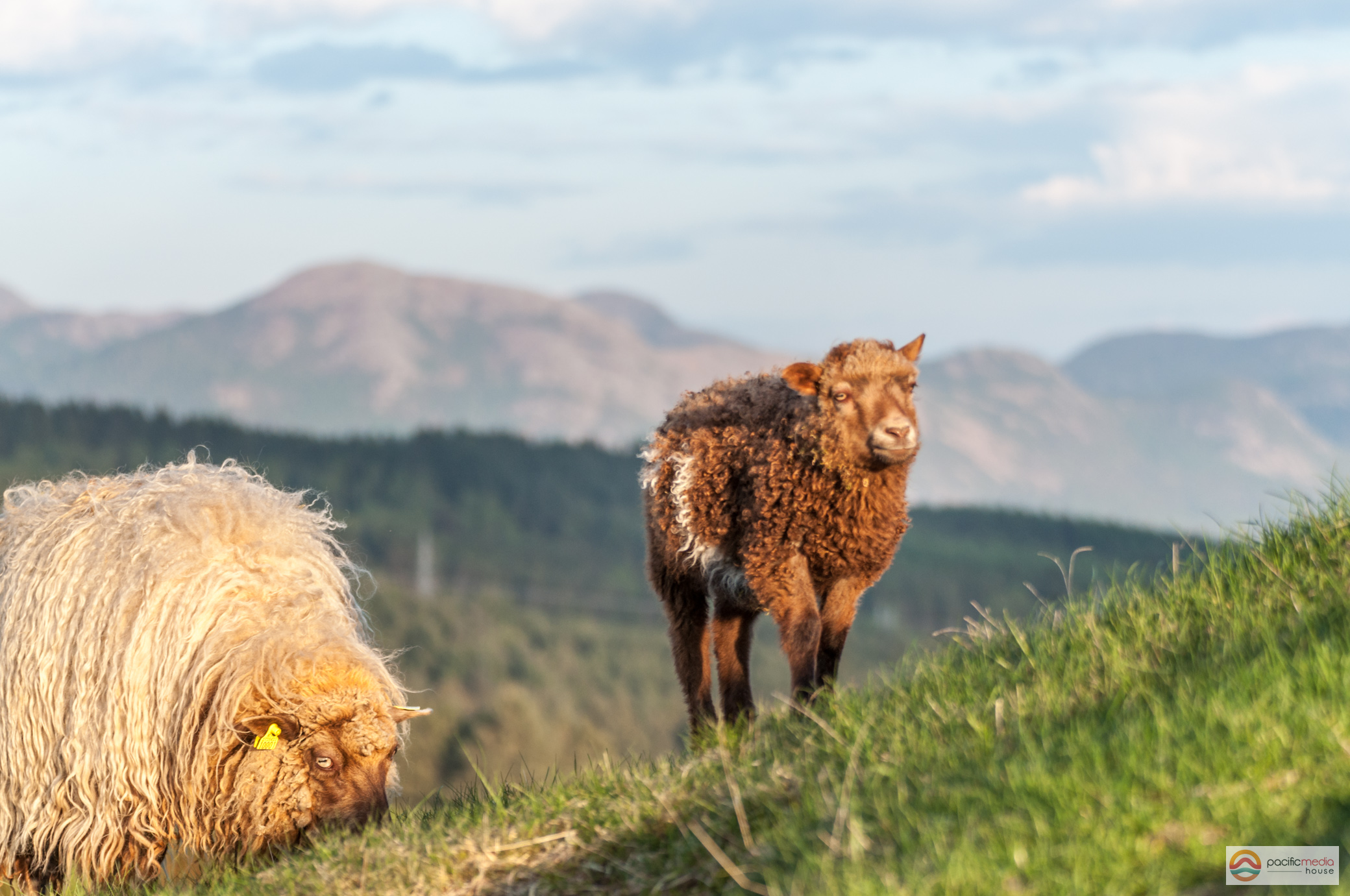 Worldwide, we raise and kill billions of animals for food every year. According to the Economist, at any given moment, there are about 19 billion chickens, 1.5 billion cows, one billion sheep and another billion pigs living on earth. In 2021, meat consumption lay at more than 300 million (!) tons (source: statstica.com).

Funny how things can change. Today, I have been living vegan for more than seven years, and the treatment of animals has become a centre worry in my life. It all started when I was living in Egypt and looked after Rox, a wonderful Rottweiler I was taking care of for a few months in Dahab.

The way we interacted with each other somehow opened my eyes to the hypocrisy I was living – loving a dog to bits and in the next moment eating a salami sandwich made from pigs, that are just as individual, playful, loving, caring, and the list goes on as dogs are. 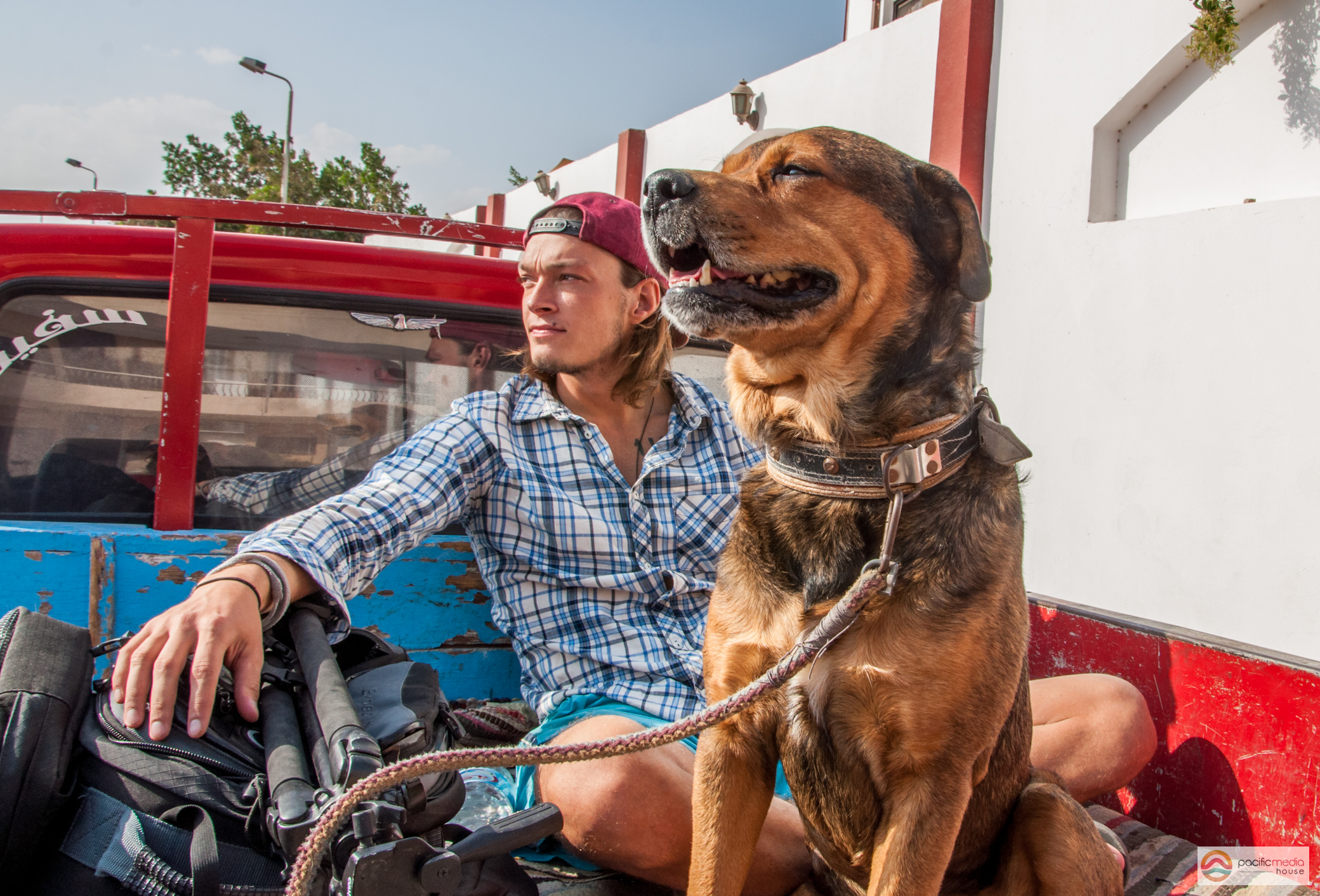 Rox and I driving in the back of a pick-up truck in Dahab, Egypt.

Over the course of a few days, these thoughts haunted me, and I did the only thing I could: I turned vegetarian. I was determined not to support this cruel and terrible industry. No way in hell. And after about a year of taking many deeper dives into the topic, I turned fully plant-based. Honestly, even without deep dives, the issues surrounding animal agriculture are obvious and apparent, and at least in Germany, likely everyone knows about them but most turn a blind eye to them. Without making this post about veganism or dietary choices, I feel this information is critical to what I am going to write about.

Back to Fiji and the street dogs

This might be news to many people living in western countries, but street dogs are a gigantic problem in nearly any developing country. Fiji is no exception. In fact, I visited SPCA, Suva’s only (!) shelter, yesterday to take some photos for them, and one of the employees told me about their current quest to find out about the number of street dogs in Fiji, starting with the capital city of Suva.

For some context, Suva has less than 400.000 inhabitants, yet makes up nearly 50% of the country’s population. Using an app, they drive around town, documenting the amount and location of any dogs in the street they encounter. The app then extrapolates that number and spits out an estimate. Just for Suva, he told me that number seems to be somewhere in the 40.000 dogs range! 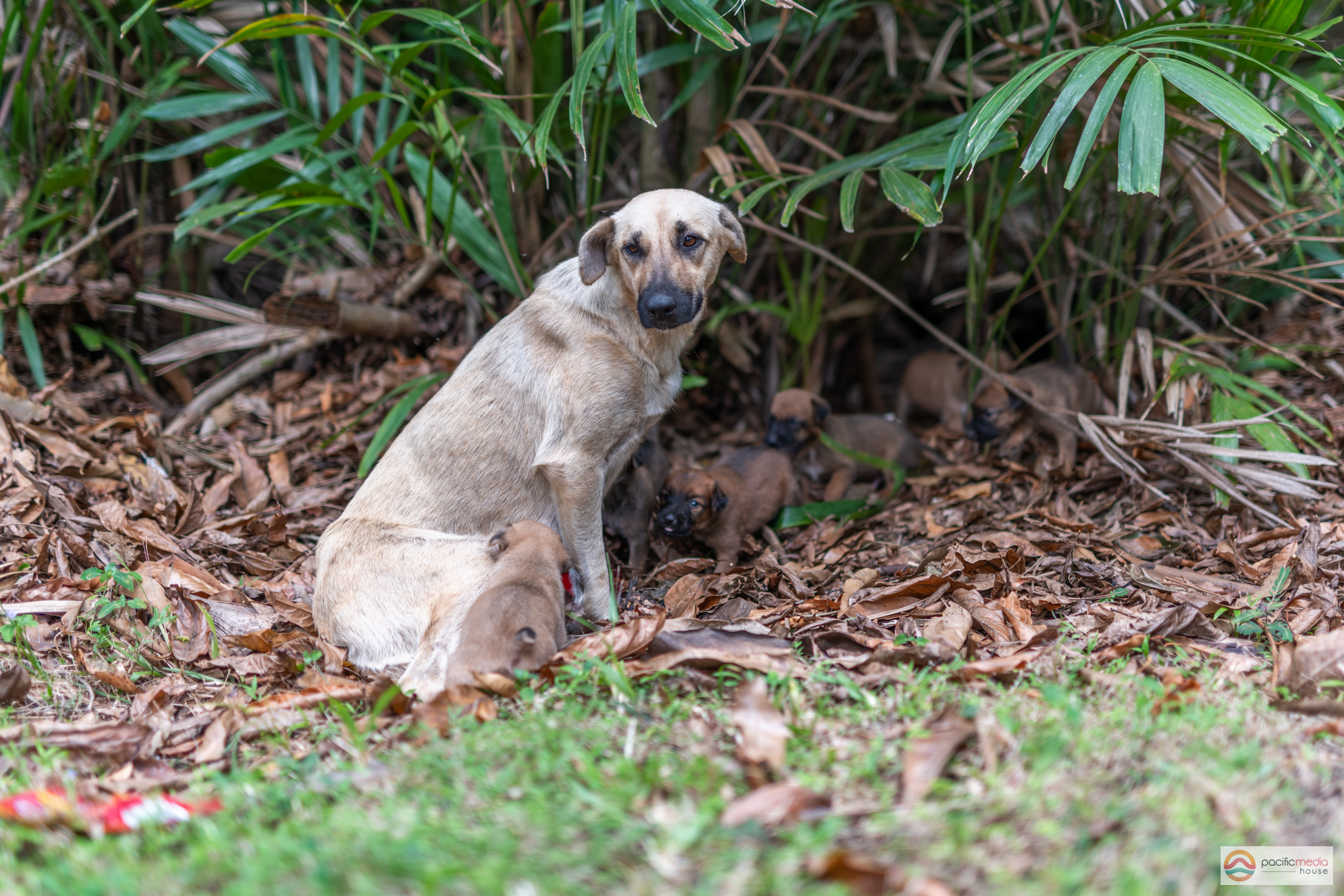 This is a female dog with her eight puppies. I found her during walks with our own dogs in the bush on the USP campus. For the first few days, I kept feeding her, trying to think what to do and how best to help her. One morning, she seemed so weak that I spoke to SPCA and asked her to pick her and her puppies up. A few hours later, a volunteer and I got her and the babies in a car. I named her Moana. An incredibly friendly soul just trying to survive and raise her young.

Even if it was only half of that or even a quarter – imagine 10.000 poor souls trying to survive on the streets. Having adopted two street dogs ourselves and knowing how much personality, character and feelings they have, this simply breaks my heart. I am sure other animal owners can relate – dogs (as do cats, pigs, cows, and the list goes on) certainly have personalities, feel pain, suffer, are happy, endure pain and long for love as many other animals, including us humans do. 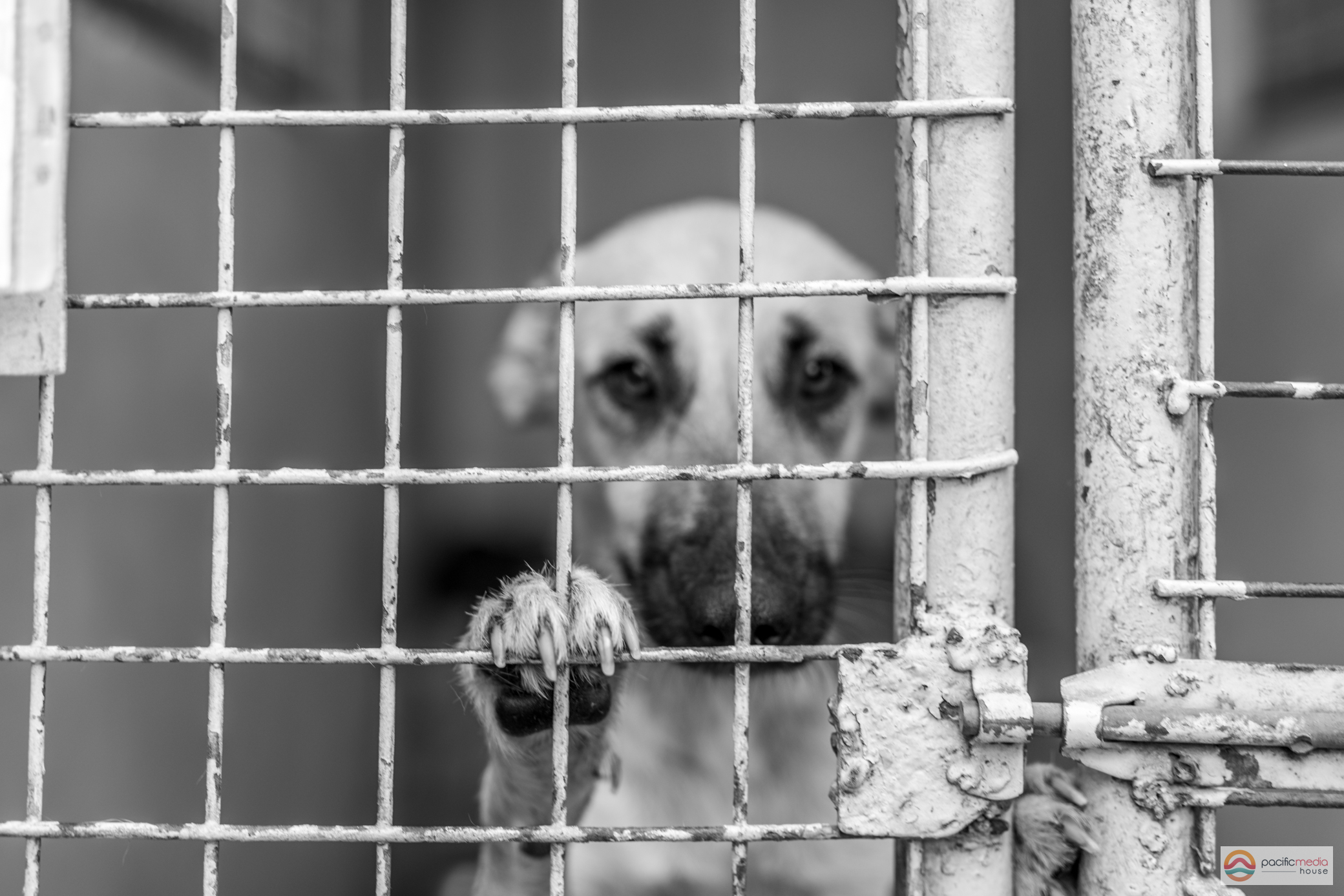 And this is Moana in her cage at SPCA. I keep telling myself it was the right decision to bring her in but at the same time, it breaks my heart to see her like this.

While a percentage of these dogs may be looked after in one way or another, thousands of others suffer horrible fates. Cruel and sick violence against animals is common – I myself have seen people pouring boiling water over a dog because the barking annoyed them. Dogs are generally feared and seen as dangerous. It is often apparent in young children already teasing them, throwing stones at them or beating them. 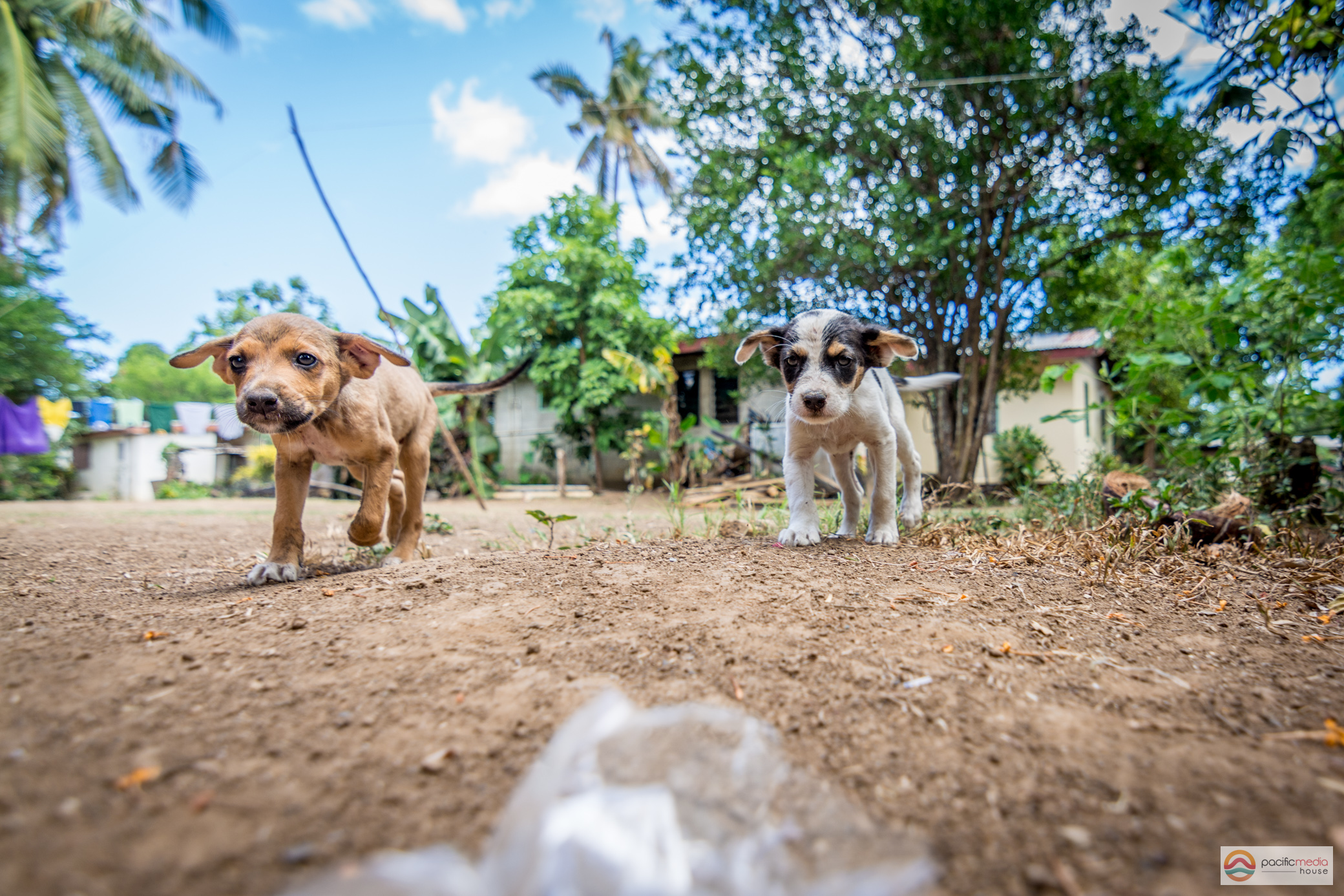 There is mostly no real value attached to them, not even a simple “this dog is an individual; he or she lives a life, so we need to respect it”-value, but they are often seen and referred to as pests. And I surely don’t want to do any injustice to the thousands of Fijians who are looking caringly and lovingly after their animals and who are doing a wonderful job in doing so. This doesn’t change the fact, though, that this is an endemic problem of gigantic size in Fiji. 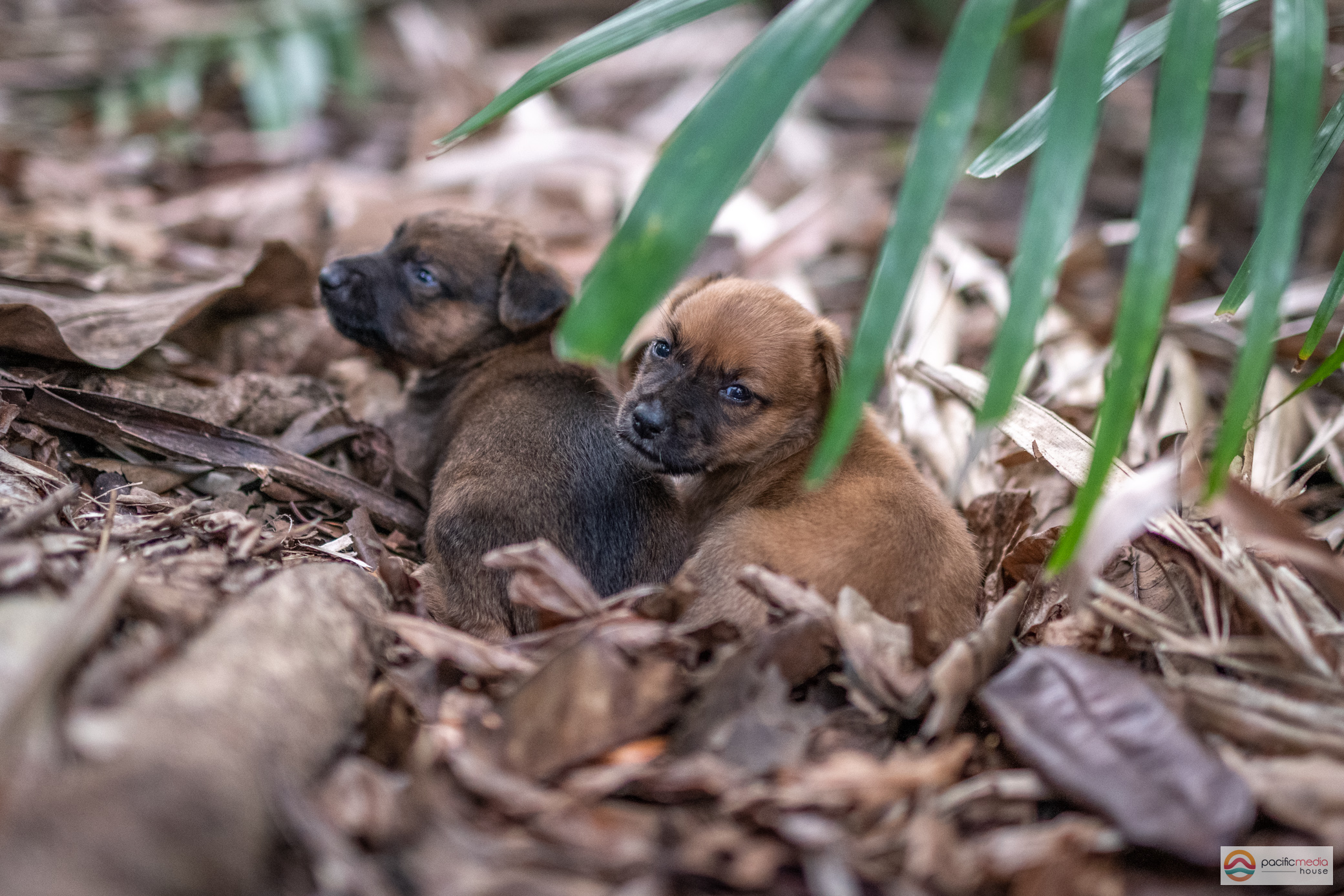 Born innocent into a world where they are unwanted. These puppies will likely end up like most stray dogs in Fiji, trying to evade humans while at the same time trying to survive.

How to help the street dogs in Fiji?

For some reason, this has grown to be a big personal issue for me and my inability to help literally physically pains me. Dogs or cats or any other animals for the latter are NOT able to speak for themselves, have no choice, and on top of that, are extremely loyal (at least dogs) even if mistreated. Having many of them living miserable lives is a thought that is impossible to bear. Visiting the shelter, from where we also adopted our first dog Kaia more than three years ago, is very hard for me. 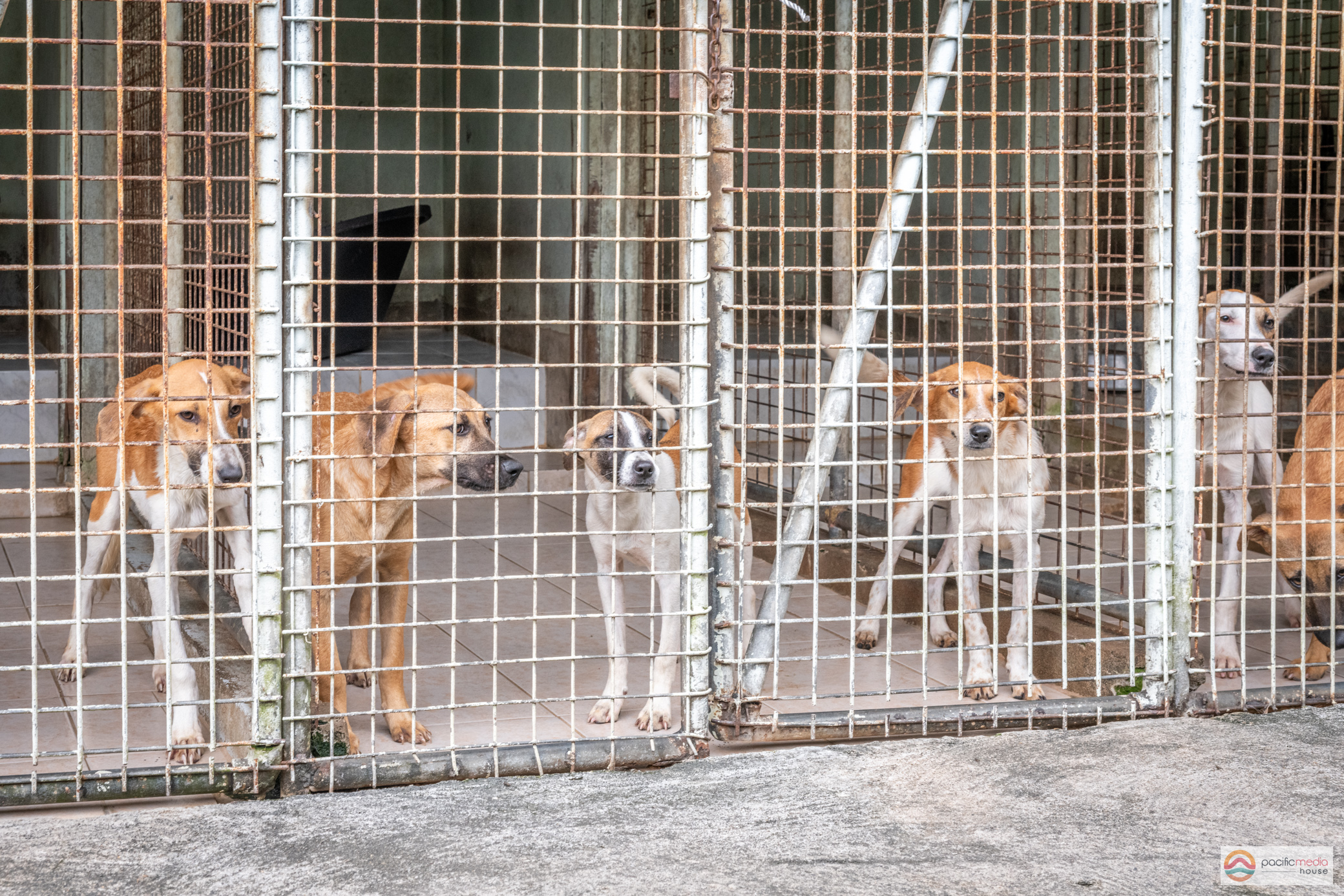 Several dogs in their kennels at SPCA in Walu Bay. These ages are hard to get adopted, as they are considered “too old” for many people.

While SPCA (Society for Prevention of Cruelty to Animals) does great and very much needed work in Fiji, being in there and seeing the dozens of animals in their cages make some incredibly sad. When I got back home to edit the photos today, it broke my heart. I couldn’t do it in a go. When I had to cry, I needed to stop, and later started again. Several times. 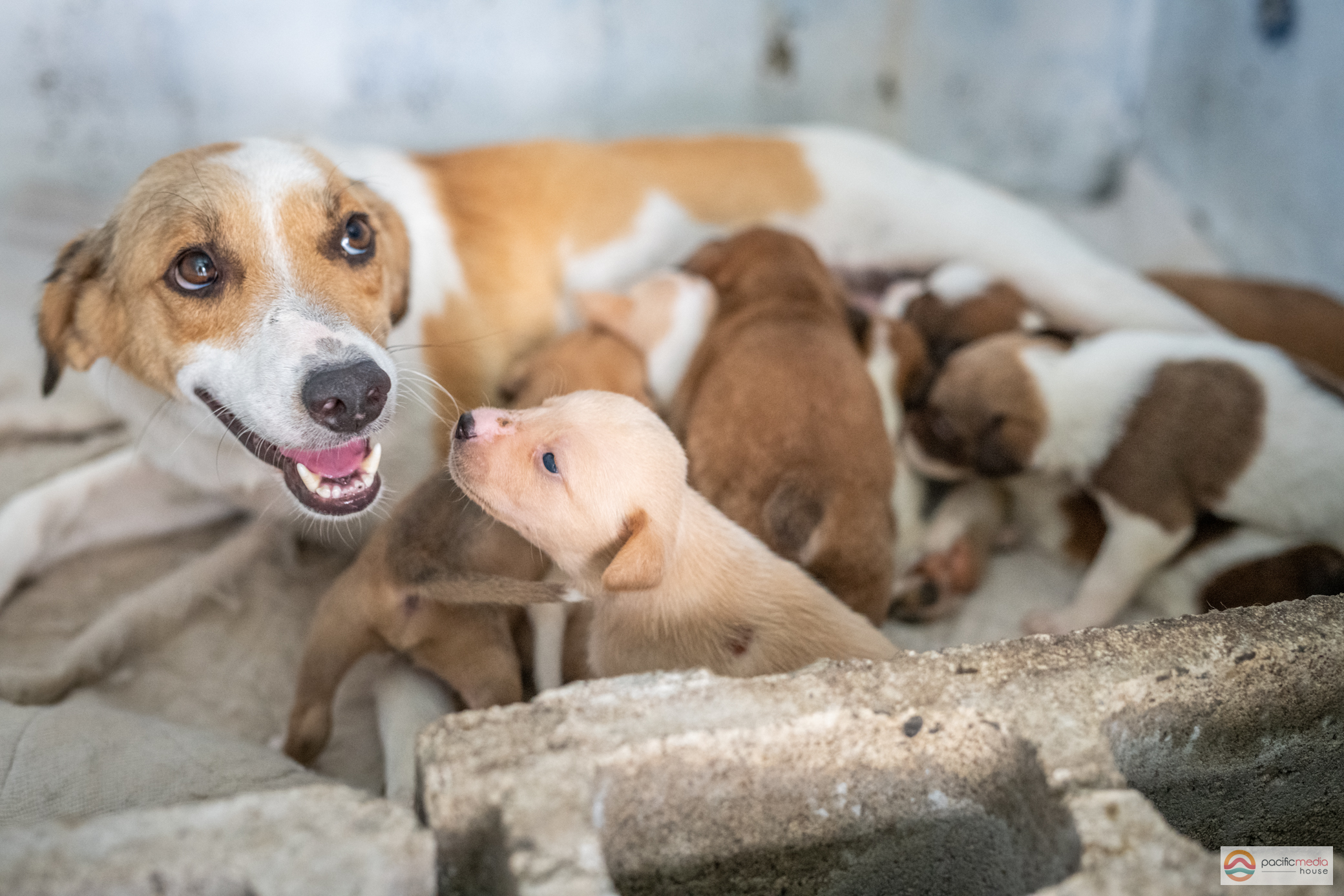 A female dog with her puppies at SPCA Fiji.

It is strange – I think I am a very resilient and “tough” person to many, but the animal’s really do come through to me, and the inability of them to voice their concerns or pains is almost unbearable to me. If this is going too crazy for you, you are welcome to close this window. If this is similar to what you think, please get in touch and let us think together of a way how to change this. I know it all seems like just a drop in the ocean, but a drop can go a long way .. Changing the lives of just a single individual animal is making a huge difference to them. Changing more is even better. 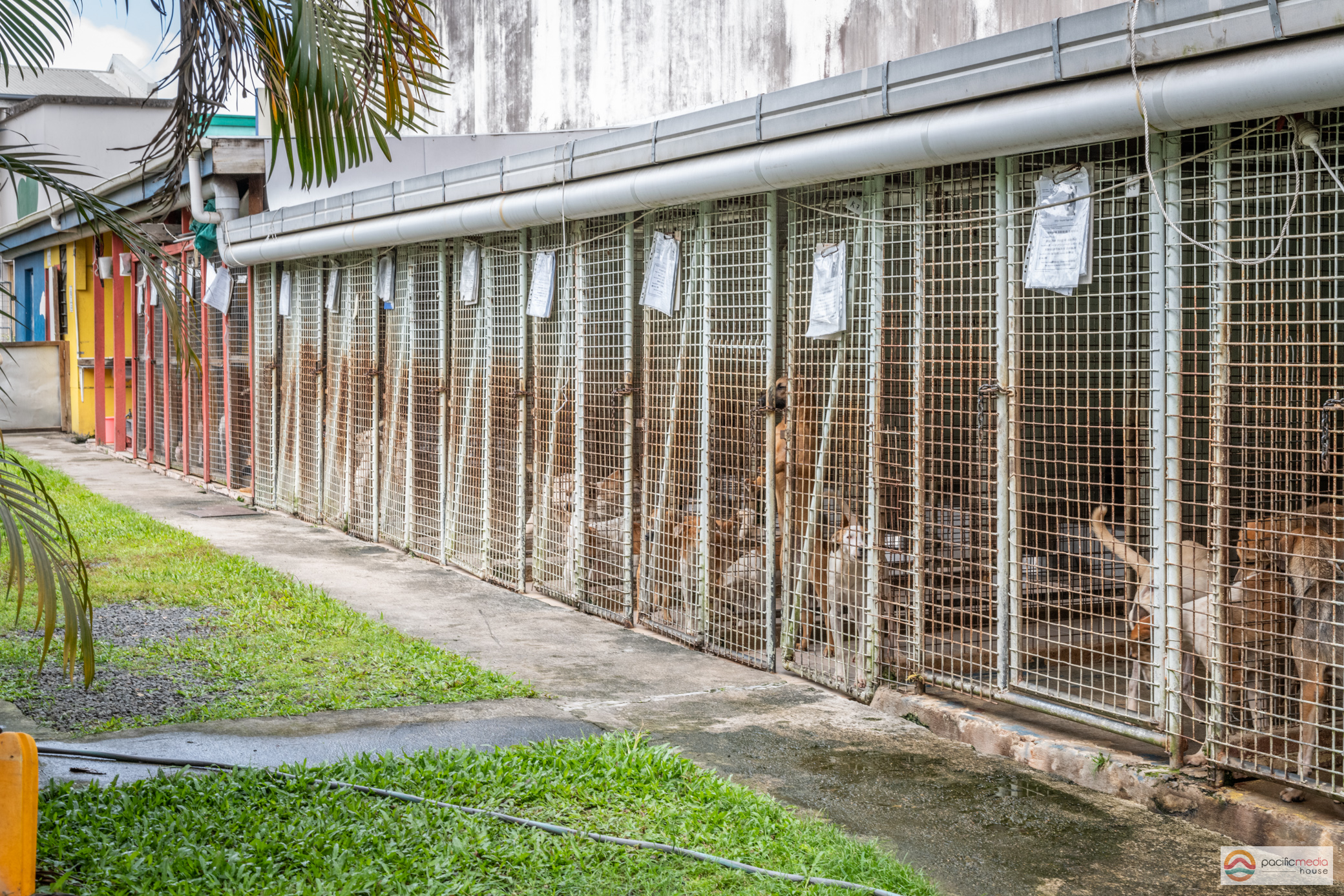 If you can, please donate

I don’t have any solutions to present, but if any of you readers wants to help from wherever you are, please donate. Every Dollar counts. There are only a few animal shelters here in Fiji, all of which are chronically underfunded and all of which need money to continue their work.

SPCA is the only shelter in Fiji’s busiest population centre, the capital city of Suva. Please click this link which will take you to their donation page.

The Greater Good Foundation is located in the northwest of Fiji’s main island Viti Levu, a registered non-profit organisation and Fiji’s only animal sanctuary. They have more than 150 dogs currently and are in desperate need of funding. Please click this link to donate whatever you can spare.

Animals Fiji is a registered charity based in Nadi, running a Clinic there with two full-time veterinarians and another smaller clinic on Fiji’s second-largest island Vanua Levu. Please click here to donate to Animals Fiji. 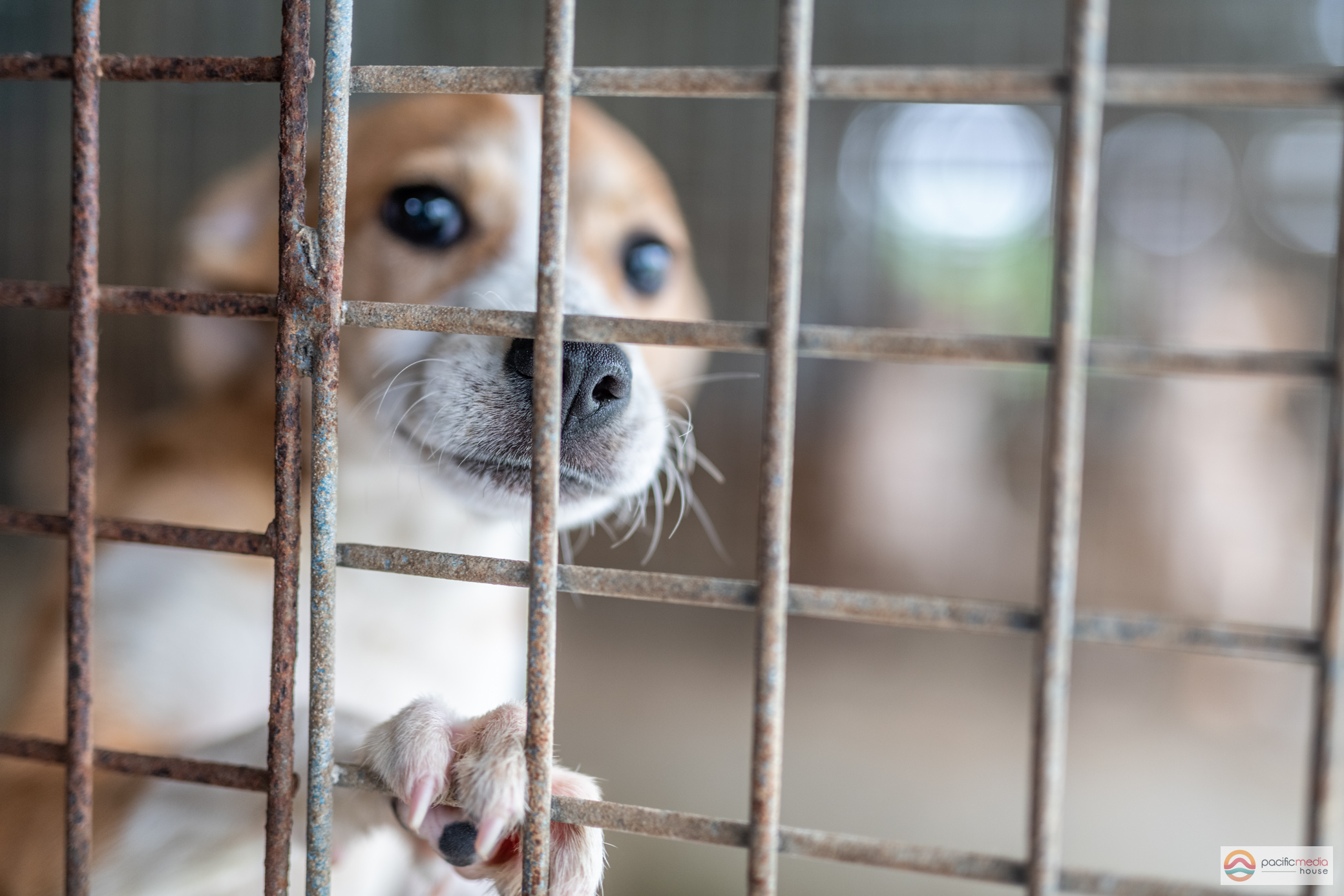 Thank you for helpng animals in need. 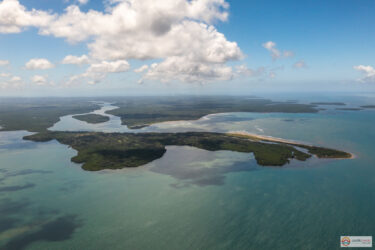 The last few months have been pretty intense, with lots of different assignments, travel and the usual daily ups and downs....