A little more than three weeks ago I came back to my home country Germany after spending almost seven months on the Fiji-Islands, where I conducted my master thesis fieldwork concentrated in a potential shark nursery area. It certainly has been an incredible time with a lot of lessons learnt and many adventures experienced. I have not only made new friends, but also met old ones and most importantly I found new love.

I think sometimes in life you just have to let go and see what it has in store for you. If you are open to changes and willing to let them happen, life might write the best stories itself. Looking back, it couldn’t have gone better for me in Fiji: it was able to work at a dream project how I had always wanted while falling in love with a beautiful and dedicated woman and on top met incredibly interesting and inspiring people. Besides all that, I made a huge step forward in my underwater photograhy and was able to conduct many sharkdives with the ever-smily team of Beqa Adventure Divers. I came home with a ton of beautiful shark images, with many of them yet waiting to be processed. 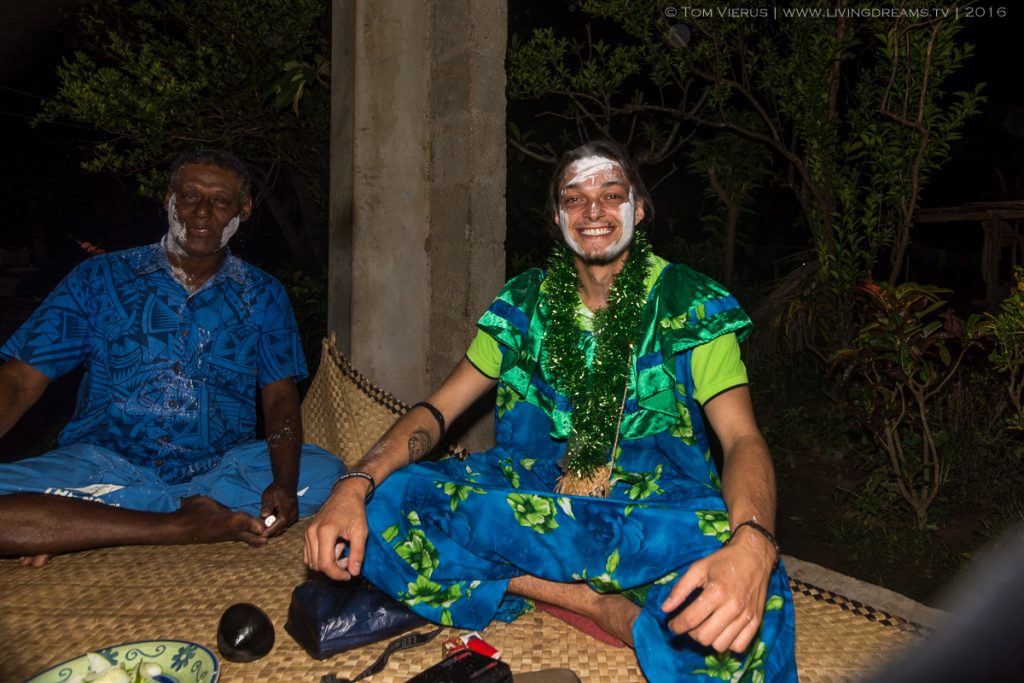 My last evening in the village: we had a big celebration with many kava bowls and laughs. Later in the evening I was put in a dress and all of us got creme and white powder on our faces and arms – apparantly a good bye tradition 🙂

After a pretty long way home, that took me 45 hours from door to door, I arrived in Frankfurt at a bitter-cold 5 degrees Celsius. Since being back I have delibarately taken my time to readjust again and to find my way back into my German everyday life rhythm. This has been my third longer time period abroad in a very different cultural setting and yet every time the return is challenging. Everyone who has been away from home, built a “new” life and then had to cut ties to go back, has surely experienced these troubles in the one or other way. It is not only a simple time zone difference, but goes way further than that: the adjustment of rituals that have developed over months, certain behaviors that emerged from a specific set of given circumstances different from home and so on. The one or other might be quicker in fully arriving home (and I do not mean physically), whereas I usually have a struggle with it for the first few weeks.

However, after spending a week with my mom in good old Trier, I moved my furniture back to Bremen and into a new flat right in the center. I was quite busy and it felt good to be back. After meeting a few people at the Center for Tropical Marine Ecology (ZMT) and presenting my project to the Mangrove Ecology Group led by one of my supervisors, Prof. Martin Zimmer, I started the DNA extraction of my sharkfin clips: little pieces of shark tissue that I had taken from the pectoral fins of the juvenile sharks. 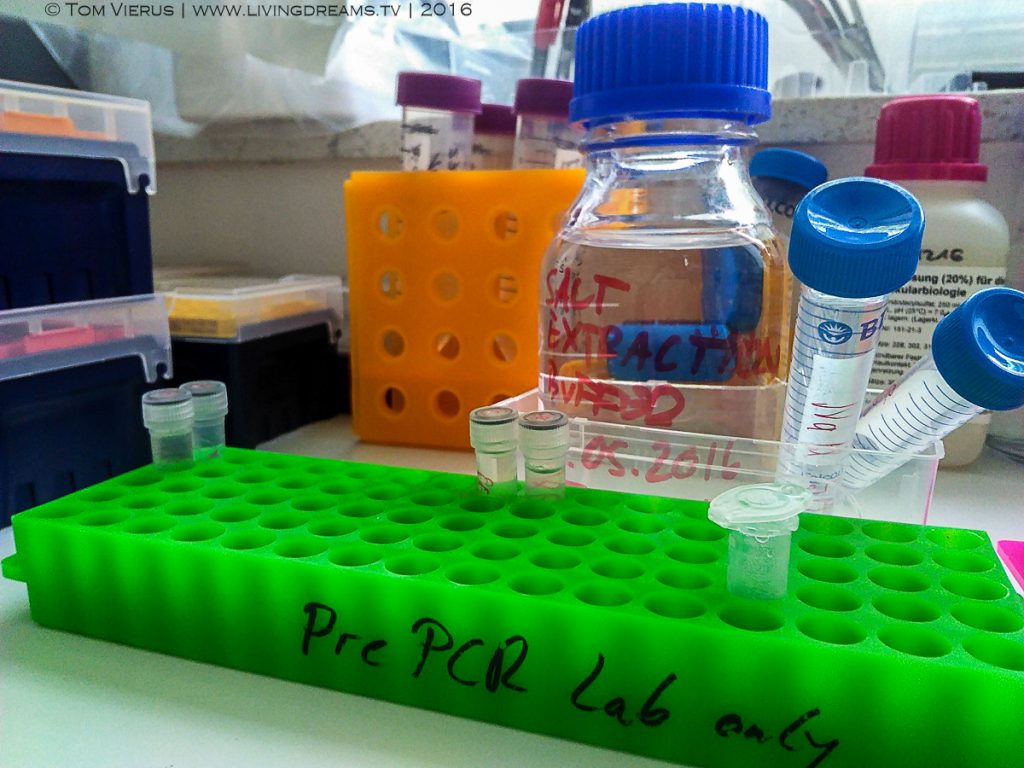 Despite not (yet) having genetic proof, I am pretty sure about the identification of two species: Great hammerheads (Sphyrna mokarran) as well as Scalloped hammerheads (Sphyrna lewini), Though, it is still unclear what kind of shark my third species is. There are a few possible candidates, with the main one being the oceanic blacktip shark (Carcharhinus limbatus). The DNA barcoding will yield final proof.

Basically, to get the DNA out of the shark tissue I have to follow certain steps in the lab:

Once this is complete, I will hopefully have clarity on my species and can focus my literature review on them. Not only have I caught at least three different species in the Ba river estuary, but I have also collected fin clips from what I think were juvenile Bull Sharks (Carchahrinus leucas). Fisherman had caught them within the Ba river and fortunately called the white guy interested in sharks (=me) to show them. This means that we have at least four different species utilizing the Ba river and its rivermouth area. An interesting an exciting shark species composition that needs to be looked into more in future. And who knows, maybe there are even other species that I simply haven’t caught? 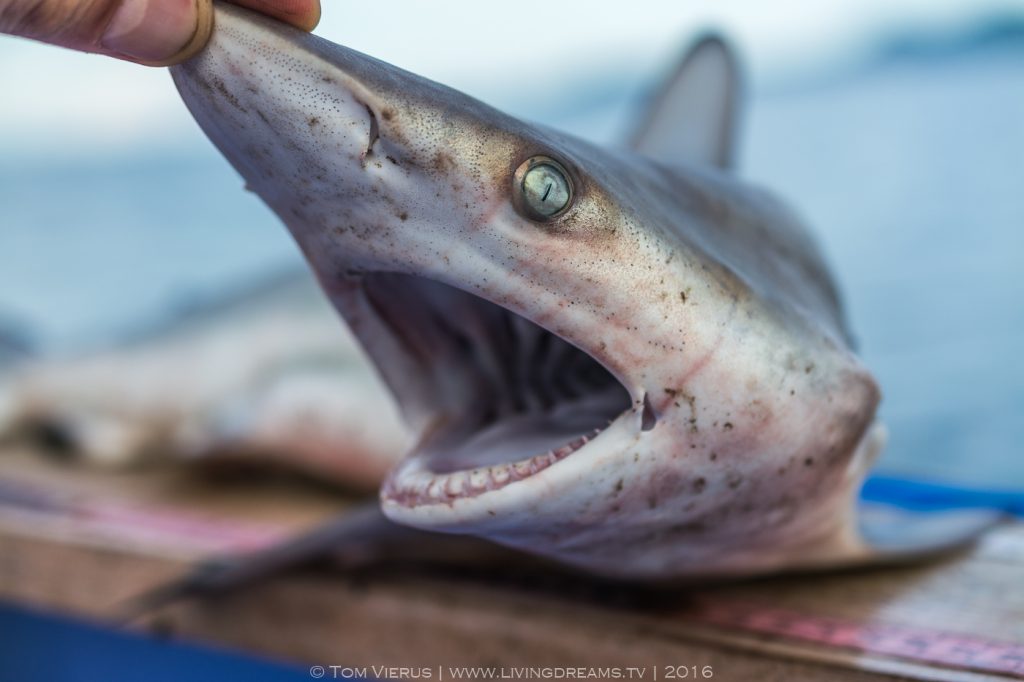 Analyzing the data – bad weather as a key component

One good thing has the generally rather grey, windy and rainy weather up here Germany’s north: I am not really tempted to go out much and can spend the time doing my analysis at the computer. I am still at the very beginning of it but I have put together a few basic graphs and statistics. It is quite important in science to first visualize your data to get a good overview before losing yourself in wrong tracks and in too much (unimportant) detail.

In my case it starts with my species composition. Over the course of my fieldwork in the Fiji-Islands, I have caught:

So far, my total shark catch composition looks as follows: 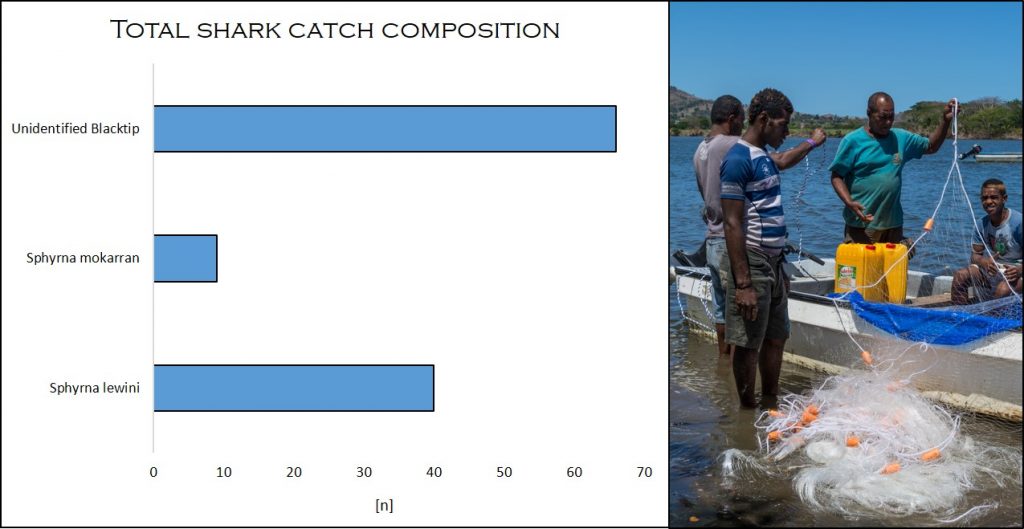 To narrow down the area I had to cover I chose to divide the Ba estaury into seven circle areas, within each I randomly chose 10 fishing sites (blue flags on the satellite image below). I included traditional fishing grounds of local fisherman as well as other areas where we might not expect to catch any sharks as comparisons. Additionally, I varied parameters like distance to mangroves and distance to rivermouth as well as depths of the individual circles and sites. 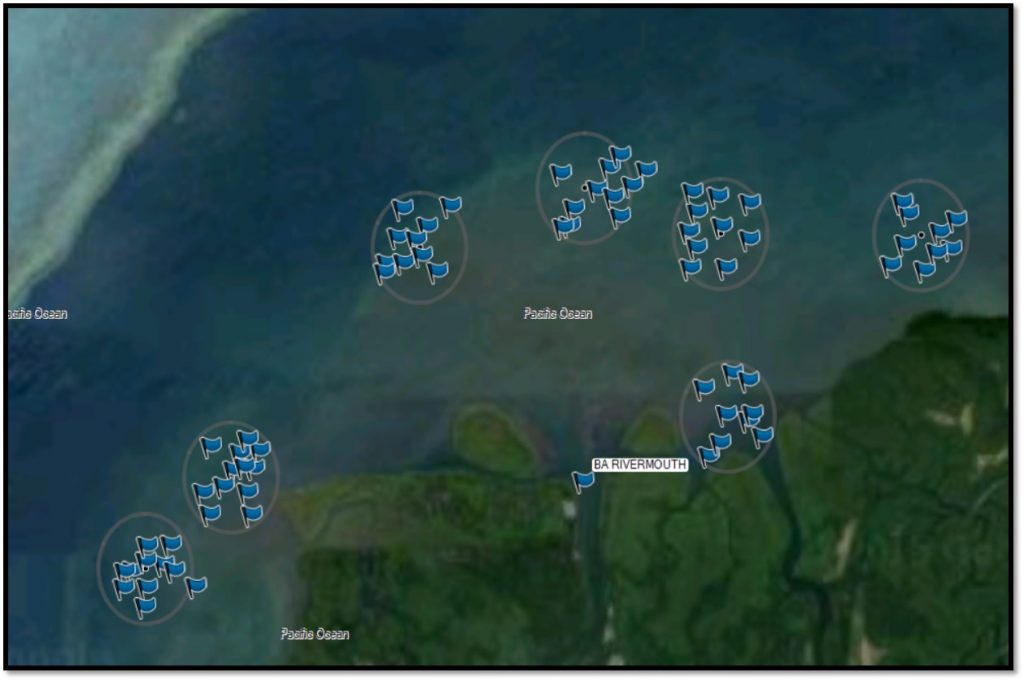 An overview of the Ba river estuary. I have divided the area into seven circle areas, each with a diameter of 1.2km. All circles contain ten randomly distributed fishing sites, which I continiously sampled throughout the fieldwork period, either with longlines or bottom-set gillnets.

In addition to the shark related data like sex, umbilical scar condition, length and release condition, I also recorded environmental parameters including salinity, dissolved oxygen, turbitidy and temperature at each of the ten fishing sites within one circle area, i.e. I have 70 data points with shark catches that I can couple to the respective conditions recorded at the time of deplyoment. Within the circles, catches and species composition have been varying, so I am looking forward to look into this data during the coming weeks!

As part of the social part of my thesis I also conducted interviews with fishermen, investigating Traditional Ecological Knowledge (TEK) as well as Local Ecological Knowledge (LEK) and collected the shark composition on the local fish market. Together with the license data from Fiji’s Ministry of Fisheries I hope to come up with a rough fishing pressure estimation, which could give an impression of the current situation. 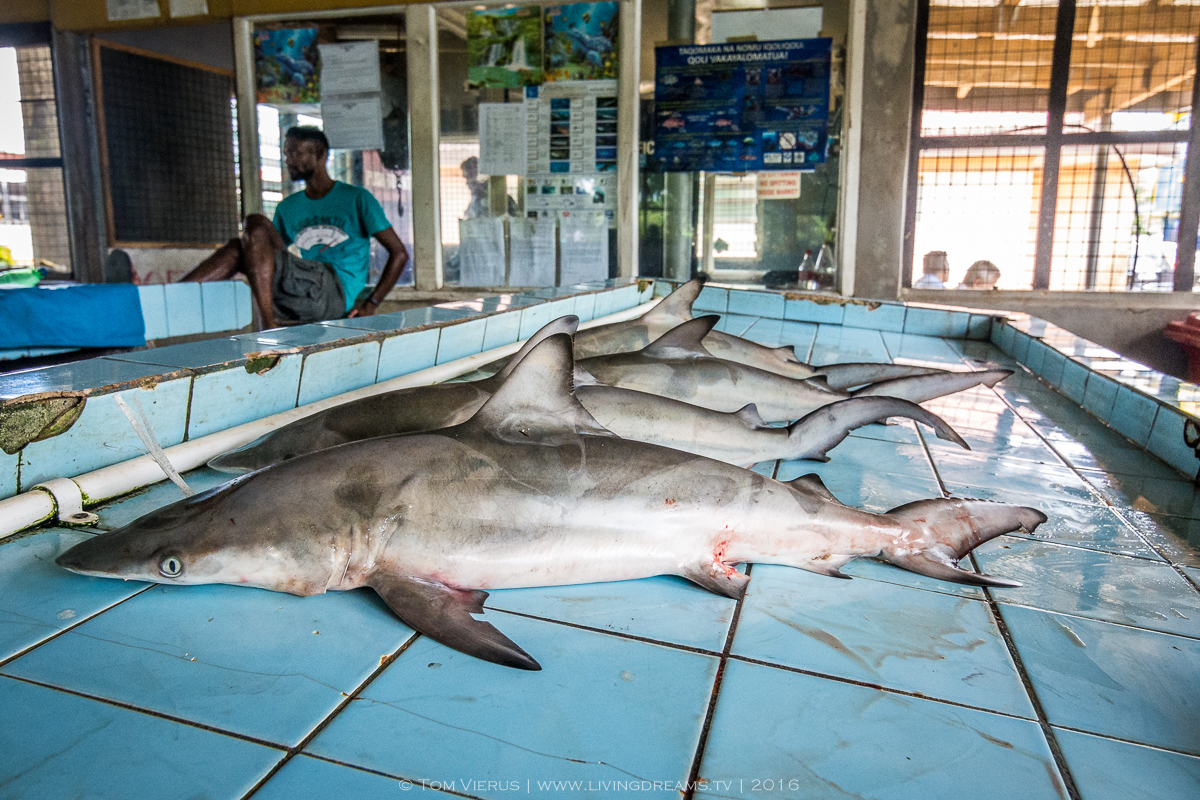 The sharkcatch being sold at the local fish market. On this particular day, only four sharks were displayed, most probably oceanic Blacktips (Carcharhinus limbatus).

Initially I planned to find out whether the Ba rivermouth area might serve as a nursery ground for juvenile sharks and if it does, for which species. Years back, scientists (and non-scientist) were rather quick in designating potential shark nurseries as such, simply based on the fact that they have caught a certain amount of juveniles in a certain point in time. For example, in 1967 Springer defined a shark nursery as a shallower coastal area where juveniles remain in for feeding and growing to sexual maturity. Even though an important observation and proposal this definition was rather vague. A little more than 20 years later, Bass (1978) then widened that concept by dividing it into two different types:

Having split nursery areas into the mentioned types,  it still proofed almost impossible to develop standardized methods to test whether a certain area indeed serves as a nursery or whether an occurrence of juvenile sharks could be explained by single individuals or cohorts simply passing through. That changed in 2007, when Michelle Heupel and her colleagues came up with a new and clearer definition of shark nursery areas. Essentially, they proposed three criterions that have to be fulfilled: 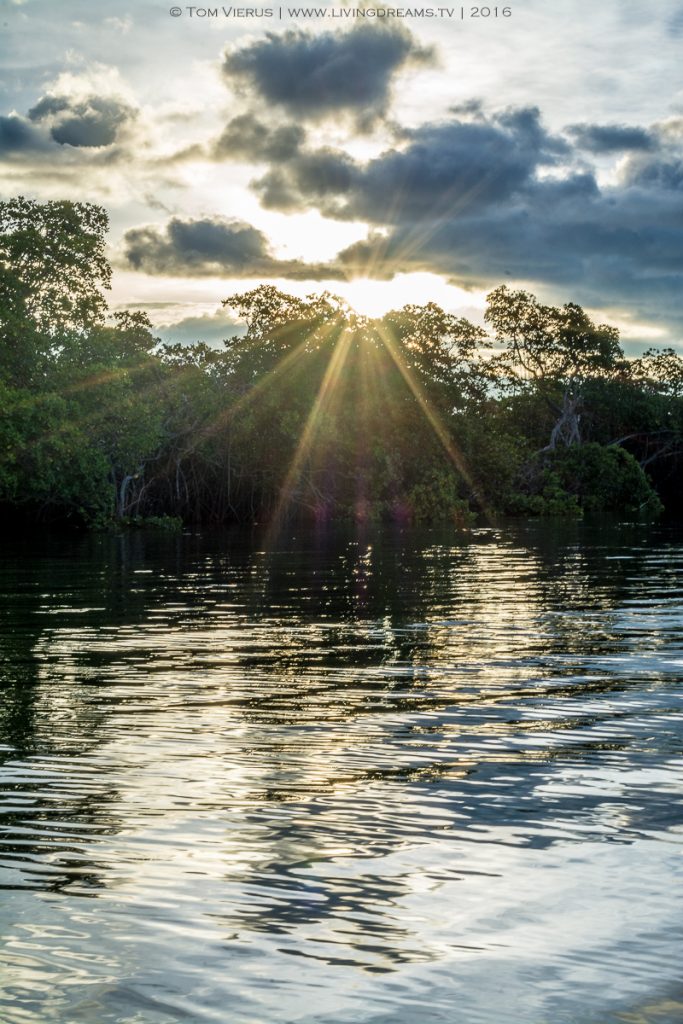 Does the Ba river estuary serve as a shark nursery area?

As I was not able to prove Criterion 2 and 3, I cannot meet all assumption of Heupel’s nursery area concept. Nevertheless I collected strong indicators supporting the hypothesis that this habitat indeed serves as a nursery ground for a range of shark species. Though, future research including a continuous sampling of this area is needed to confirm the assumption.

The fact that almost 50% of the sharks I have caught had an open umbilical scar supports the assumption of an existing nursery ground. Viviparous sharks give birth to live pups with open umbilical scars which eventually heal over time as they grow older.

Why would it be good to know if the Ba river estuary is a shark nursery? Well, two of the species I have tagged and released – the great and scalloped hammerheads – are listed as endangered species by the International Union for the Conservation of Nature (IUCN). Populations of these two shark species have declined dramatically over the last years. Thus, we need to identify and protect critical habitats inlcuding feeding and mating grounds (where hammerhead sharks aggregate in large numbers) as well as nursery areas to make a major step forward towards the longterm survival and protection of these important apex predators.

Coming months and analysis to be ahead

I plan to finish my analysis in the coming weeks to be able to hand in my thesis beginning of August like the ISATEC rules demand. Until then I have a lot of work to do: be it in the lab, in the library or at the computer. The good thing about own projects is that it is exactly that: your own project! You might have planned, prepared and conducted it yourself and thus (hopefully) identify with your work – this makes it a lot of fun working at the collected data!

The hours at see could be long and yet I would love to spend another night on our little fibre glass boat, listening to Bula FM and sharing cigarettes with my fishing crew.. It’s been a good time!

I am really looking forward to get the results from my DNA barcoding! Who knows, it might be even a species that hasn’t been recorded yet..

If you are interested in this project please do not hesitate to drop a comment or a mail and check out Part I and Part II of the shark nursery project series! 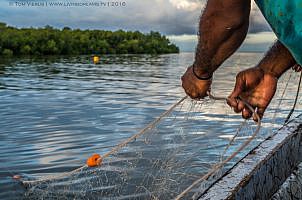 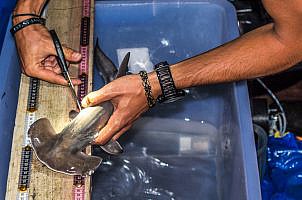 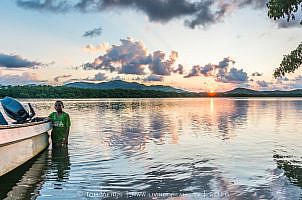 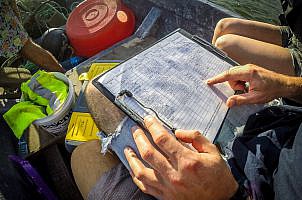 Can’t wait to hear your stories!

Really amazing job, Tom! Looking forward for your next article on the topic. 🙂

Thanks Dessi! Looking forward to visit you guys in Berlin!

[…] a little talk about my master thesis project on the Fiji Islands, where I investigated a potential multi-species shark nursery area over the course of seven months. I was very happy that all went well and especially delighted to meet quite a few Germans involved […] 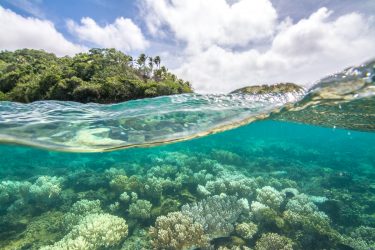 Tropical coral reefs, the ‘rainforests of the sea’, represent one of the most biologically rich ecosystems on our planet....