Living in the Pacific – ups and downs and middle ground | 1

I feel like I begin almost every single blog post with those words, but it’s been a while since I last created an article for my blog. I was determined to write a 2018-wrap-up article but well, you know how it goes, and I had my plate full of a gazillion tasks.

Last year was a hectic year for me – personally as well as professionally. While probably almost all of us could say that about any given year, I had to (and still have to) deal with the greatest loss in my life thus far. My dad died unexpectedly at a young age and left a huge vacuum in our large family. It is still unreal to this day although he has been gone for more than ten months. We all miss him dearly and there is no day I do not think of dad..

Anyone having lost a young parent (or any other person they were close too) will know the pain and grief that can be hard to process. Maybe the most brutal truth for those in grief is that it has to move on. Everything always has to move on in life or so everyone says. Till we meet again ..

Moving life to the other side

Already before my dad passed away last summer Amanda and I had some vague plans to return to Fiji – the island where we met and that we both love. After his passing, it all became a little more different but eventually, Amanda got a chance to work in Fiji and after much debate and elaborations we decided to go through with our plan and moved back here last September.

Just before I followed Amanda back to Fiji (she arrived a few weeks prior to me) I flew To Munich where I was invited to the vernissage of a still-ongoing coral reef exhibition at the Paleontological Museum of Munich.

Twelve of my favorite coral images were beautifully displayed and we had a great opening ceremony. It was a beautiful evening for me and although I couldn’t stay very long, I truly enjoyed meeting the people there and seeing my work spread the work on the vulnerability of coral reefs and the effects of warming oceans to these integral ecosystems.

A few days after I was already on my way to Sicily together with a group of FishAct volunteers.  FishAct (formerly The Black Fish) has just undergone a massive rebranding to that exact name FishAct, go check out their page and give them so love. It is an inspiring grassroots level organizations that fight against illegal fishing practices in European waters and organizes several undercover campaigns per year exposing fisheries throughout Europe.

I joined them for their 2018 Sicily campaign, where the focus lay on illegal Swordfish fisheries around the stunning Italian island. During the intense ten-day trip, I shadowed the volunteers with my camera and shot a short documentary that will be released within the next two weeks, so stay tuned for that!

Back in Fiji – work permit and other stuff

Back in Fiji, my main focus was on getting a work permit, a process that can be fairly difficult here. Even with the help of a professional business lawyer, it took me almost four months albeit all the proper documents ready at my hands. But I actively chose not to dwell in the past and look forward to the coming months and all the possibilities here.

The first few weeks Amanda and I were slowly settling back in, finding (and changing) places to live and re-activating old connections and making new ones. Traveling and living abroad is great, but it also means establishing yourself in a new place without the surrounding you are used to. That’s exciting but at the same time, it is a challenge.

Fiji, once colonized by the English, is still part of the Commonwealth and regularly visited by members of the royal family. Late October ’18 Prince Harry and his newly-wed wife Meghan Markle came to Fiji for a few days and boy did the Fijians celebrate them! Of course, Amanda and I had to join the big ceremony in Albert Park 😉

I have been self-employed for almost two and a half years now and if I have learned something is that is isn’t easy and that you must make stuff happen. After receiving my work permit, I started reaching out and have met some interesting people.

Things are shaping up with quite a few projects in the pipeline but right now I can’t really go into any specifics here. So long, check out a little trailer I made about Fiji’s sharks in the Shark Reef Marine Reserve run by the amazing Beqa Adventure Divers.

Oh – and if you haven’t seen my post about My Fiji Shark – check it out here. If you actively want to support shark conservation in Fiji, you can now adopt some of the more than 200 identified and named sharks from Fiji!

Over the past few months, I have also documented a few shark research projects here in Fiji, mainly involving juvenile bull sharks. Kerstin is still investigating where the juveniles tend to hang out, how long they stay in the rivers (where they are born) and where they move on to.

In order to do that, a few receivers have been deployed in several larger rivers around here and a few internal tags were placed into the stomach cavities of juvenile bull sharks. Once the receivers are retrieved (which is a very hard task in rivers) and the data analyzed we’ll know more – stay tuned for some details. So long – a happy and successful week to everyone!

What makes me really sad... street dogs in Fiji - Livingdreams.tv

[…] among the only ones in our friend circle that has chosen to live in Fiji without a well-paying job. We came back here in 2018 not having any job promises but instead came for our love for this country and with hopes and […] 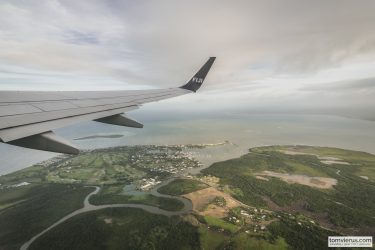 Over the past few months I shot and edited a few travel videos. Check them out below and let me know which one your...