I flew from Suva, via Nadi to Honiara, the capital of the Solomon Islands where the REPICORE feedback trip continued. Of the more than 620.ooo inhabitants of this independent island state, only a little more than 60.000 live in Honiara. After clearing customs and answering a few questions concerning my huge amount of luggage, I found myself outside the airport looking out for the arranged transfer. As it happened already a few times before on this trip, no transfer arrived. I chatted to a security guard, who knew the place and gave them a call, confirming my suspicion. “Just get a cab”, he told me and smiled away with bright red teeth. I followed his advice and made my way the 45-minute drive towards the town center, where I’d be staying at the King Solomon Hotel for the night. Welcome to the Solomons Islands! 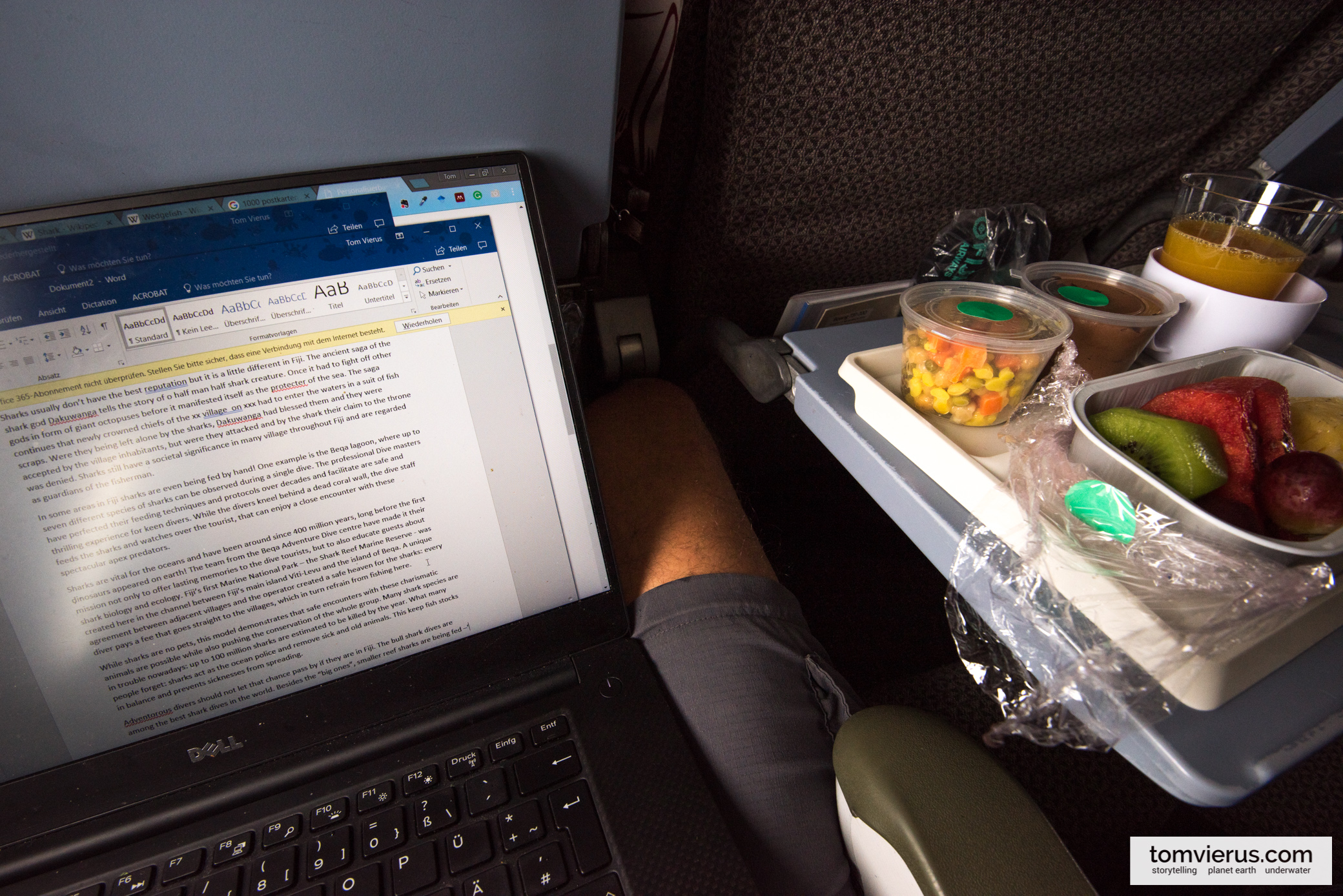 Using the time in the plane to work on an article on the Shark Reef Marine Reserve in Fiji.

The first thing I noticed coming straight from the Fiji Islands, was how much darker the people were here. Also, locals seemed to constantly chew or suck something, and I already had an idea what that was about: betel nuts! These nuts are the seed of the Areca palm and are not only consumed in some Pacific countries, but also in some places in Africa and Asia. In the Solomon Islands, these nuts are chewed with lime made from either burnt shells or corals and pepper or piper leaves (who had that idea???). The chewing leads to the reddening of the mouth, lips, and saliva, and dark red spit patches are a very common sight everywhere. At first, it seems really bizarre when someone gives you a smile and it looks like he/she just consumed a whole lot of raw meat – but one gets used to it. 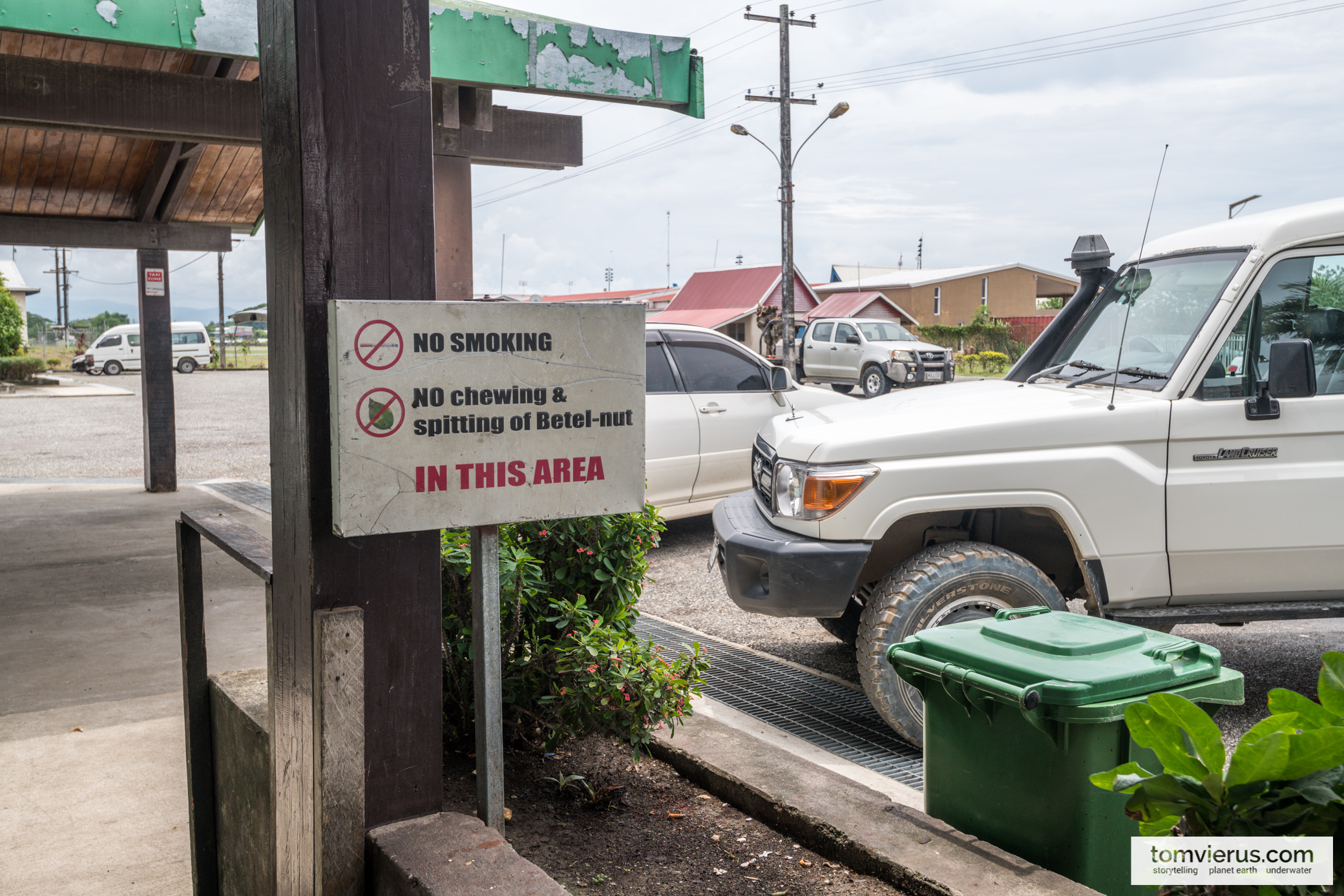 Signs at the Domestic Airport Terminal in Honiara, the capital of the Solomon Islands

We traveled in awfully slow speed on the main road towards the town center navigating through immense holes in the concrete. The town was busy and little stands with colorful umbrellas shielding the vendors against a merciless sun fringed the entire way. As I entered the impressive hotel, I was quickly beamed back to reality. Several very drunk people were sleeping on the little bar and everything seemed a little shady. Some old, leather-skinned white people were chain-smoking and drinking in the lobby and occasionally bursting out in loud laughter. Young Solomon women were serving them making this whole scene somewhat colonial. A weird place I thought to myself, checked in and entered my room. 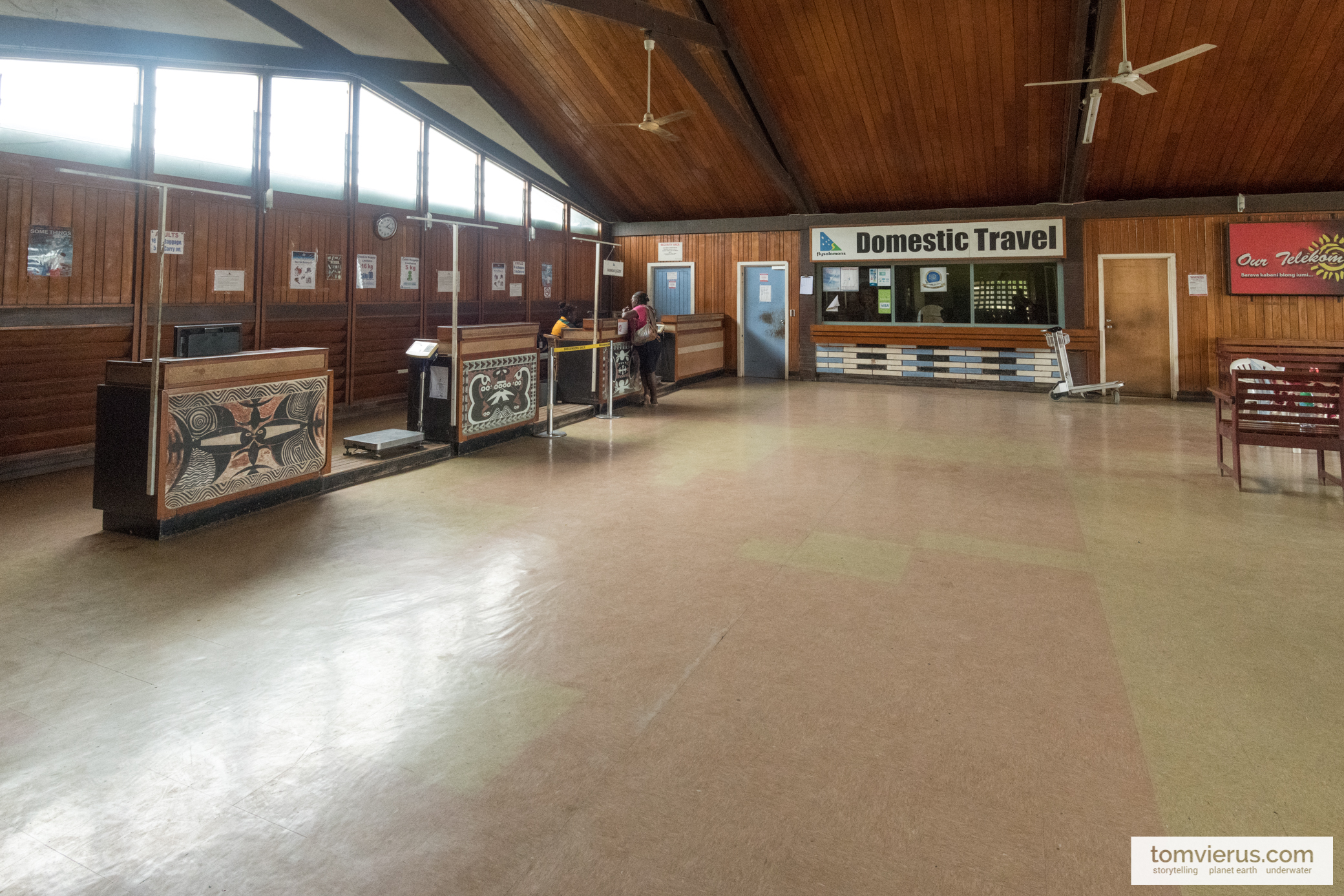 Not much going on here…

From Honiara to Munda – wonderful reefs from above

The domestic airport in Honiara is a tiny little hall. When I arrived there I was the only one to be seen. With time, the crowd grew and eventually I was joined by some Asians, a few Solomon’s and a handful of white people that visited Munda for a seagrass and dugong workshop as I found out later. The Solomon airlines fleet looks a little old, and as I was sitting on the plane just about to leave ground I admittedly felt quite nervous. To calm my nerves, I held tightly to the wonderful Nikon D850 and the Nikkor 16-35mm f/4 and kept staring out the window waiting for the wonderful sights to come. Janne had told me that the flight would be stunning, and I wasn’t disappointed. 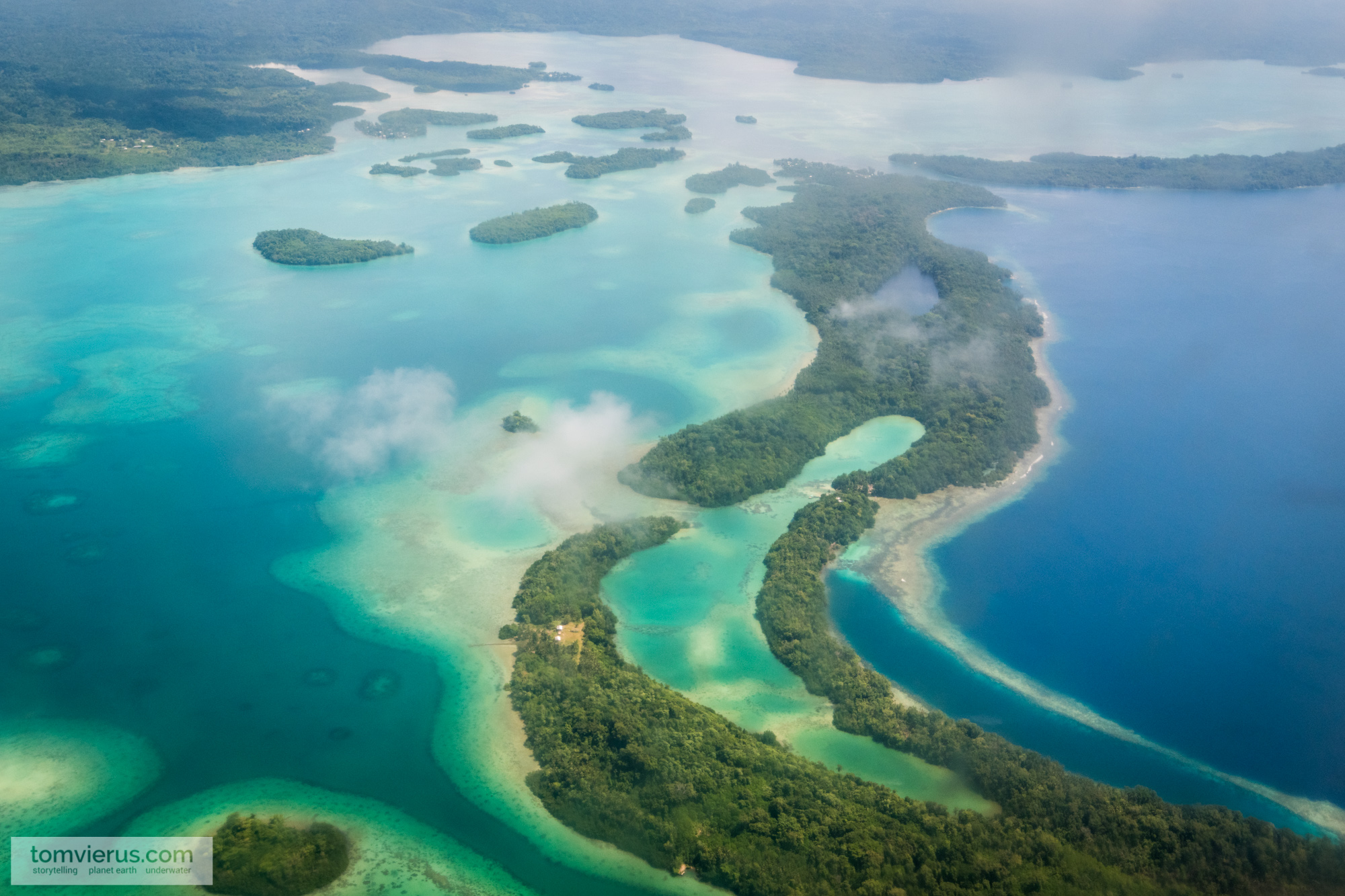 Munda is situated on the island of New Georgia in the Western Province with the beautiful Roviana lagoon just offshore. The town itself is tiny and with it the airport. After we had landed I could already see Akuila and Janne waiting for me. After a short ride, we arrived at the little guesthouse run by an elderly very friendly couple. In the coming days we had a few visits on our agenda: besides meeting the provincial environment minister in Gizo, we also visited several communities the team had worked in. When I had been in Fiji, the team had already held several meetings in Honiara with local stakeholders and policy-makers. 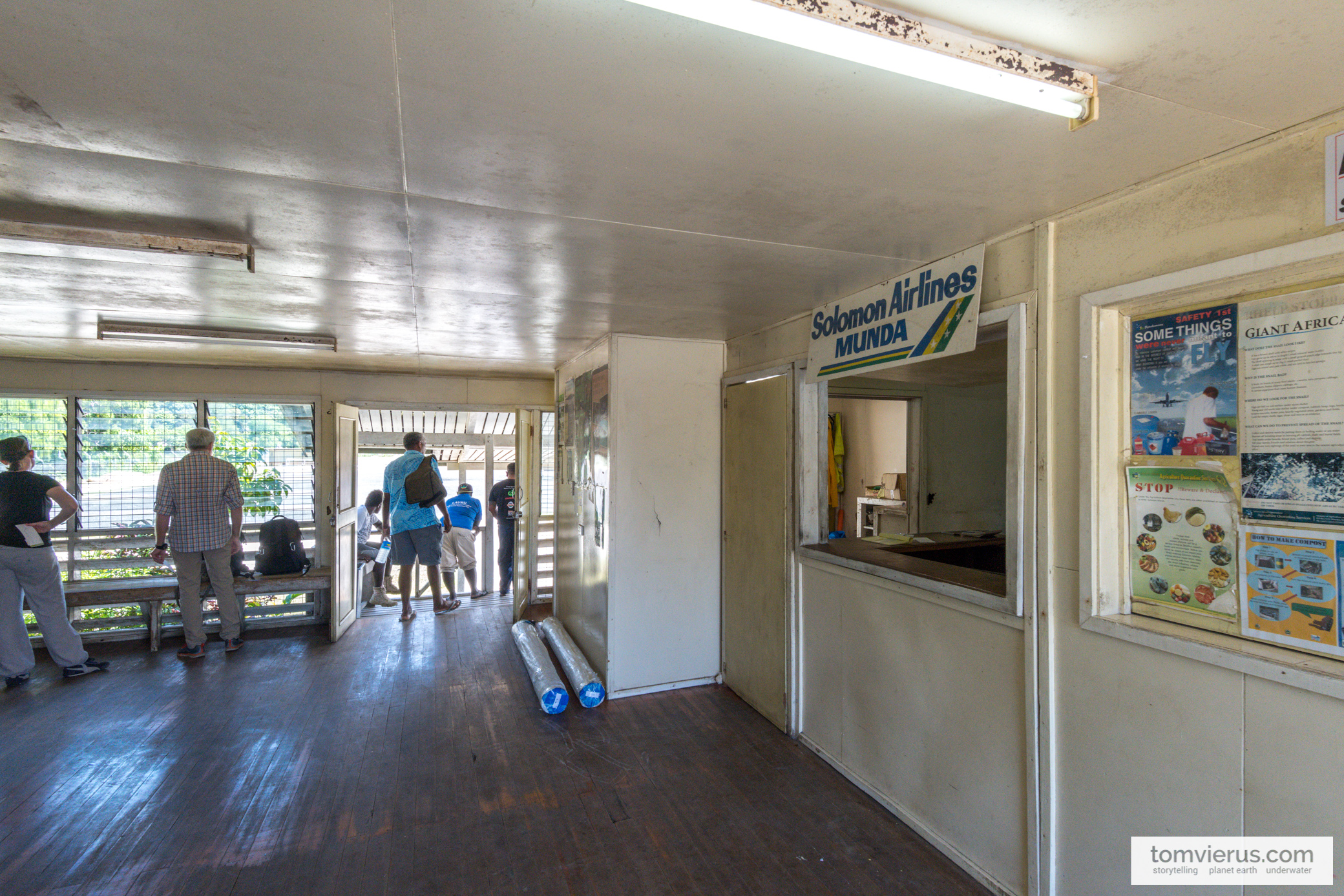 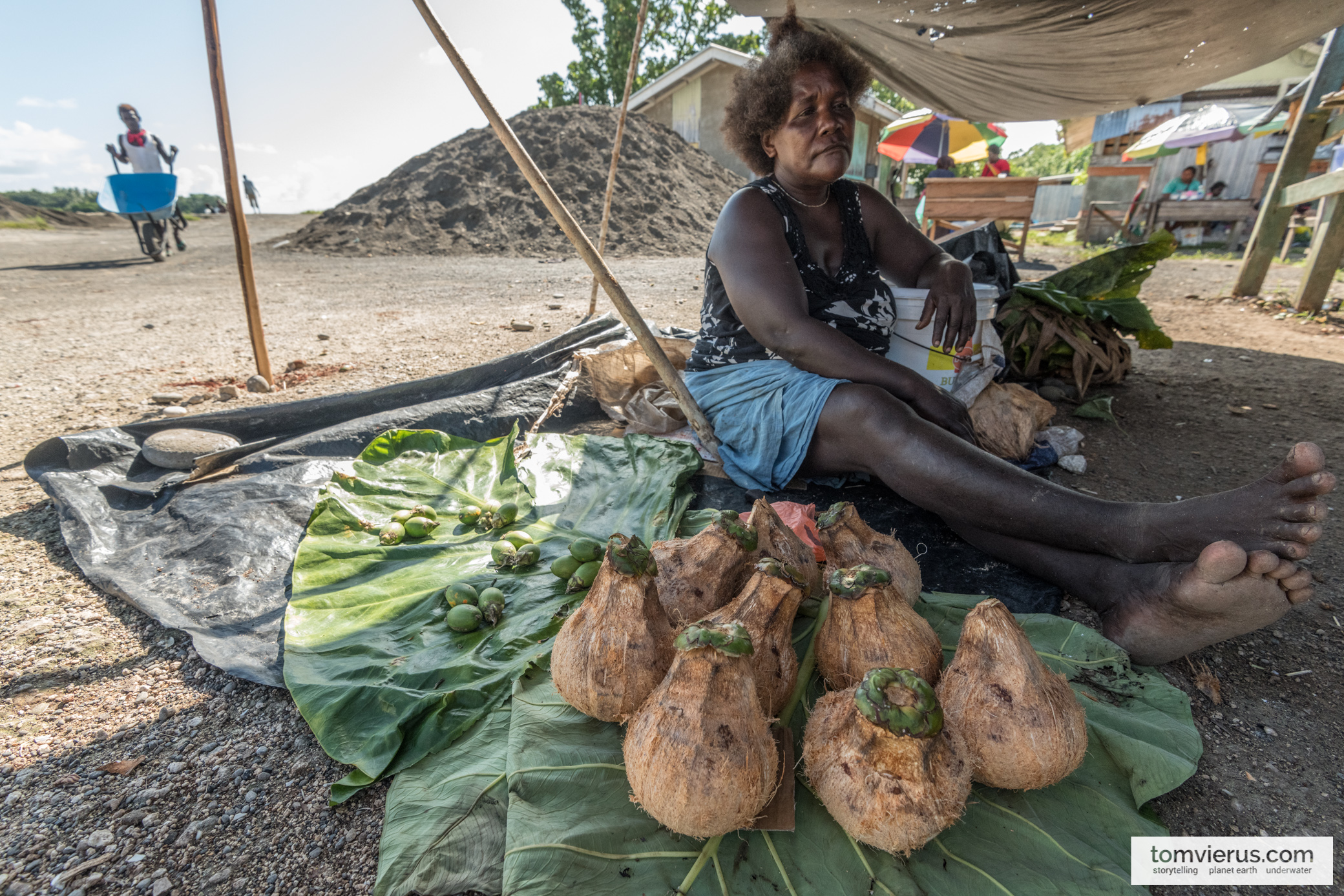 A common sight on every market I’ve been to in the Solomon Islands: betel nuts (in green) and coconuts. 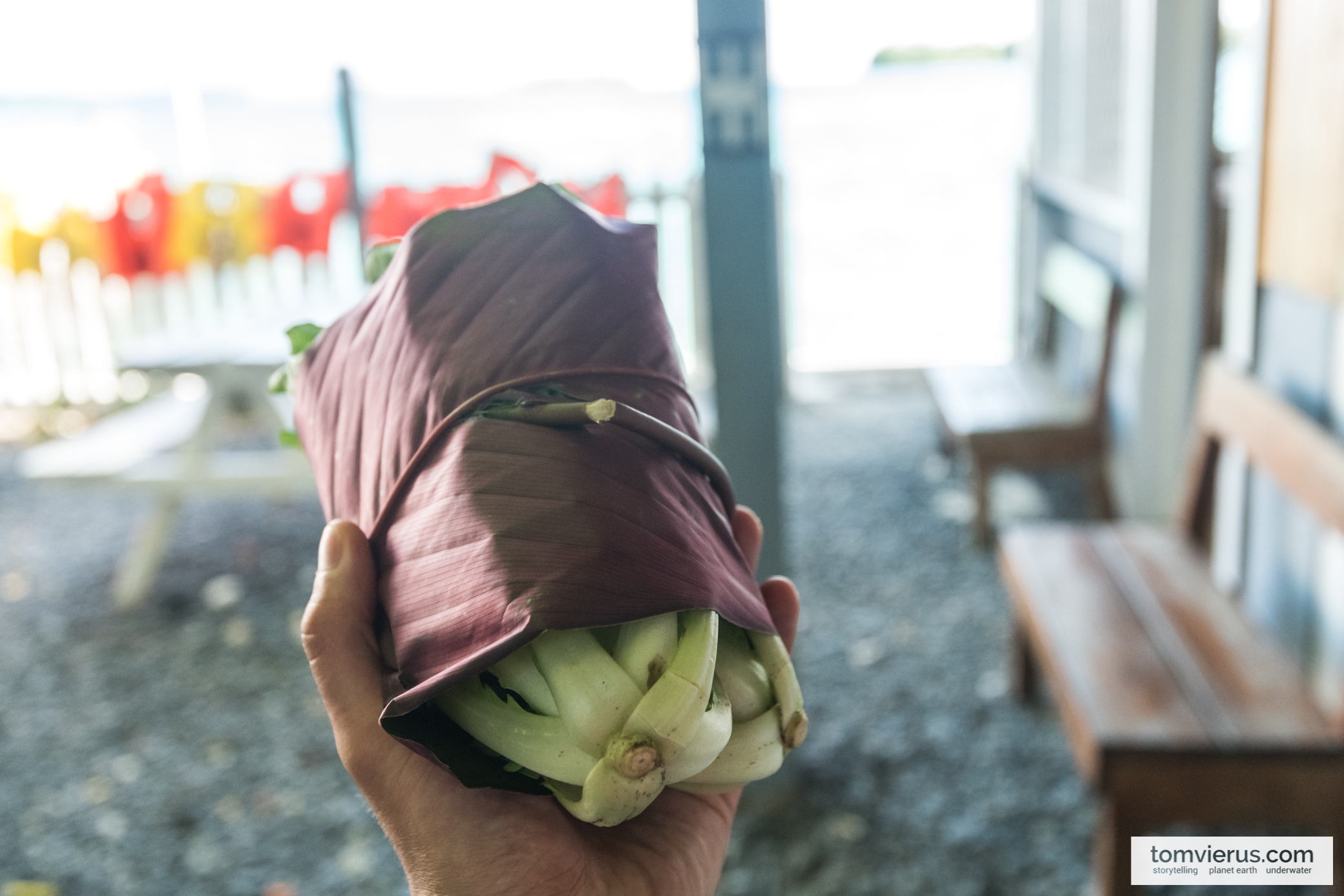 Munda – tiny but full of charm

In the evening we spent some time in the place in Munda where everyone seems to go to for a drink or some food – the Agnes Lodge. We witnessed an absolutely stunning sunset, probably one of the most beautiful ones I had ever seen. Right next to the water, several small islands could be seen in the distance and canoes and little motor boats kept arriving and leaving the little port right next to the lodge. This place was truly something magical and I couldn’t wait for the coming days.

Early in the morning, Akuila organized the trip to Gizo, a two-hour boat ride from Munda. The way led us through the stunning lagoon, a place so magical it is hard to describe. The color of the water, the dense forests on every little island, and the overall stunning beauty of this place makes it an absolute nature paradise. The temperatures were extremely high with more than 35 degrees in the shade. Here and there a turtle head popped out the water and just before Gizo, we were lucky enough to come across a pod of dolphins. It was a scary and fascinating thought at the same time, that saltwater crocodiles called this lagoon their home. We had heard several reports of two children which had died within the last three months due to crocodile attacks. The people told us the attacks have increased and blamed the logging operations, saying they’d drive the crocodiles out the rivers and further into the lagoon and thus increasing encounters with the locals. 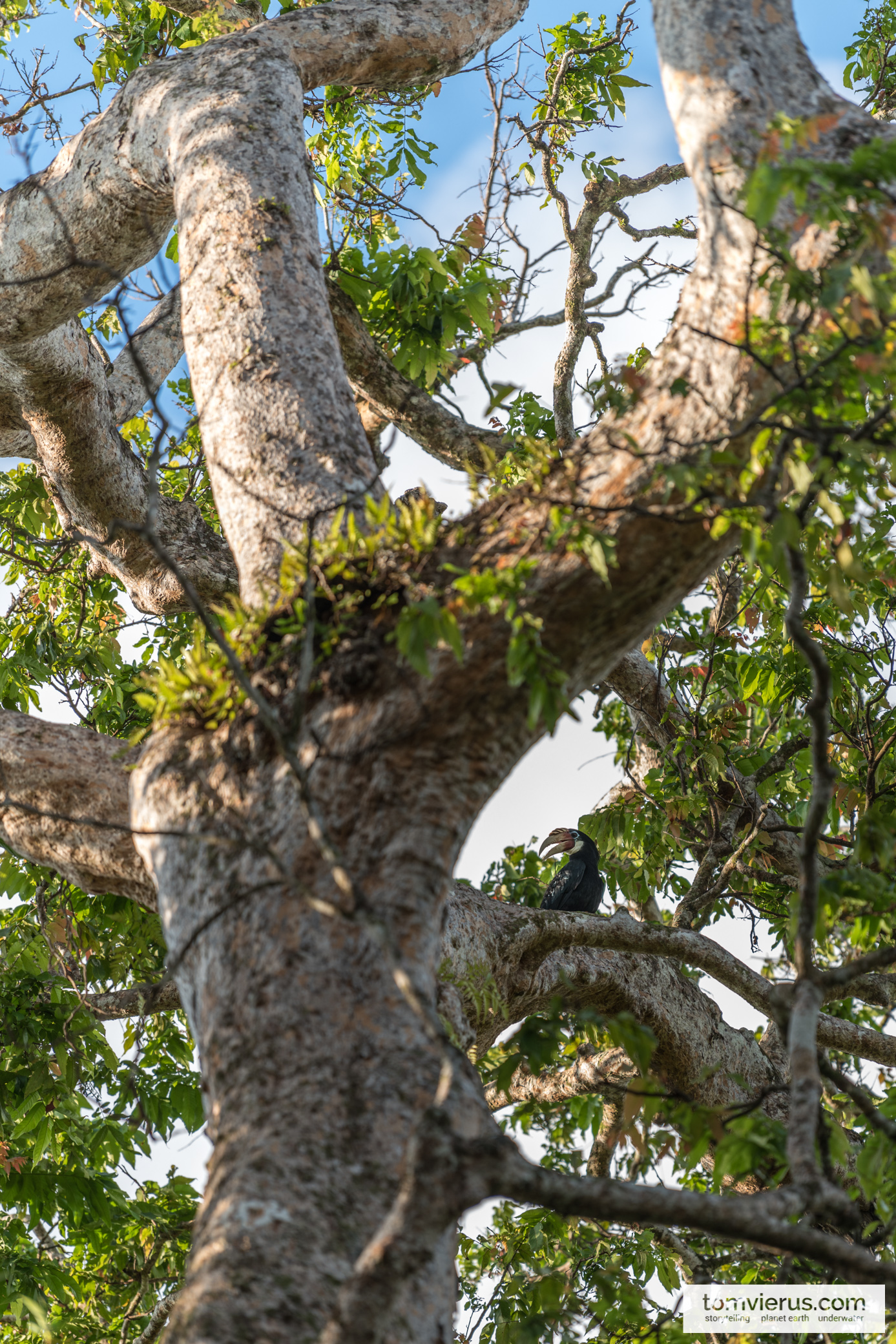 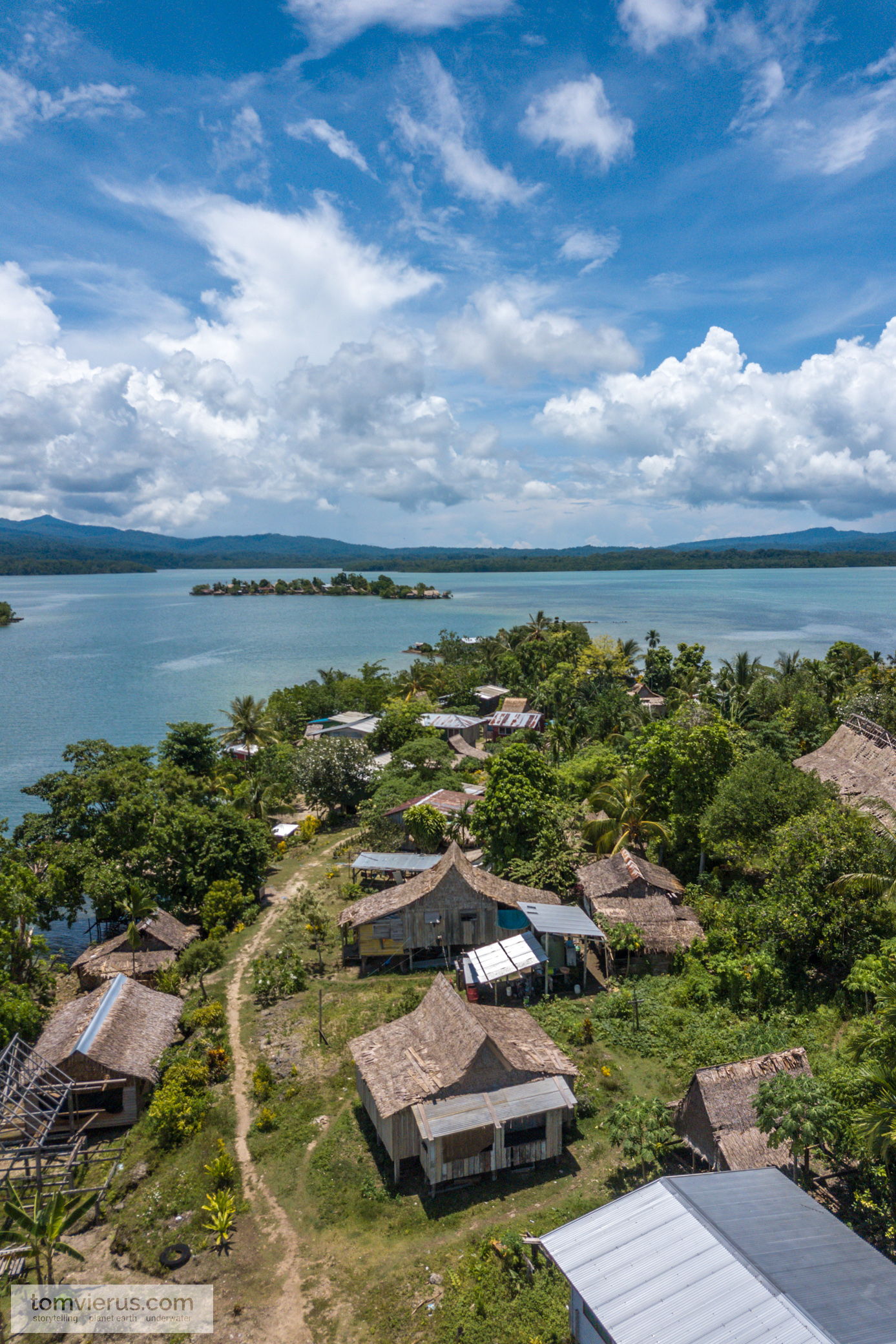 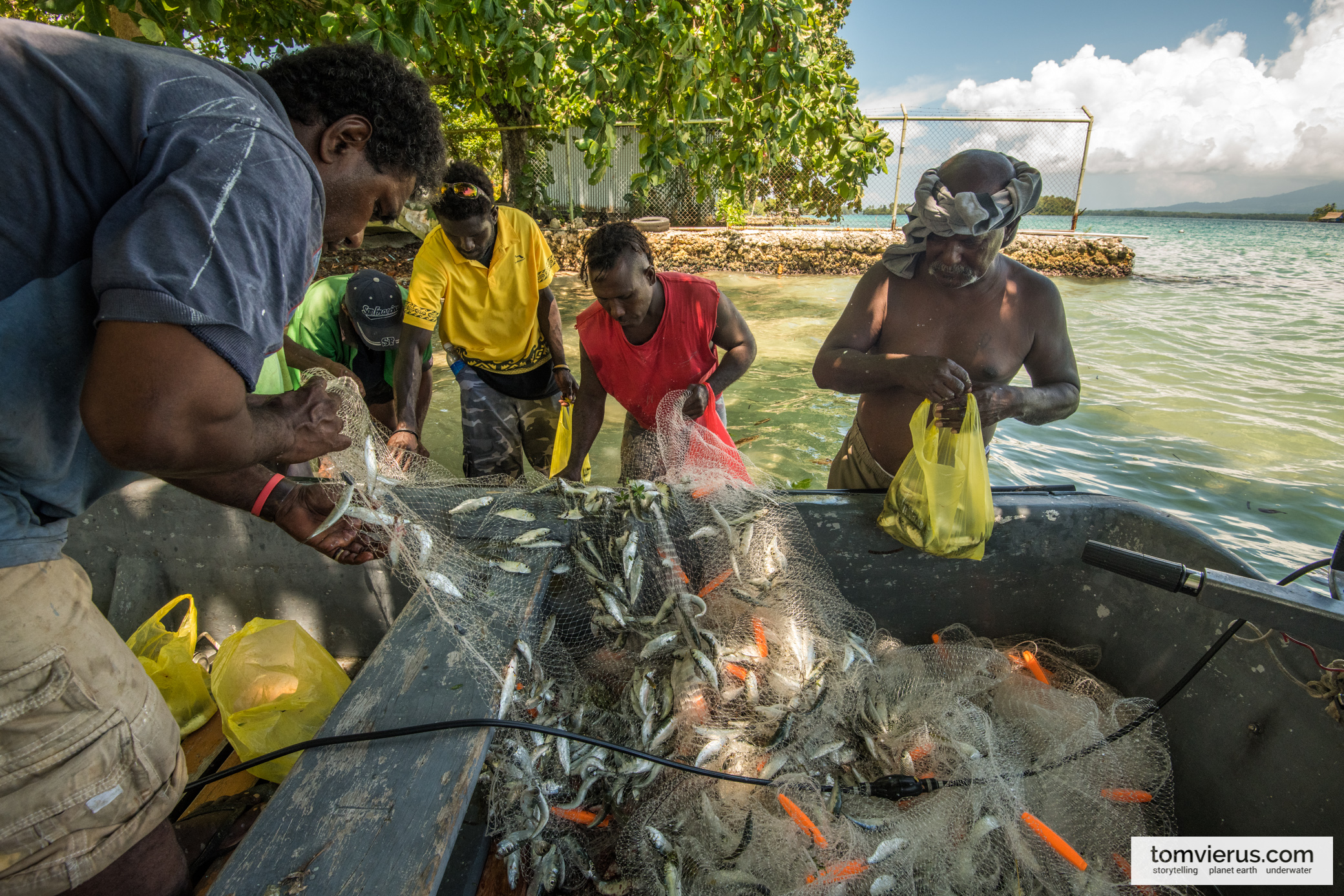 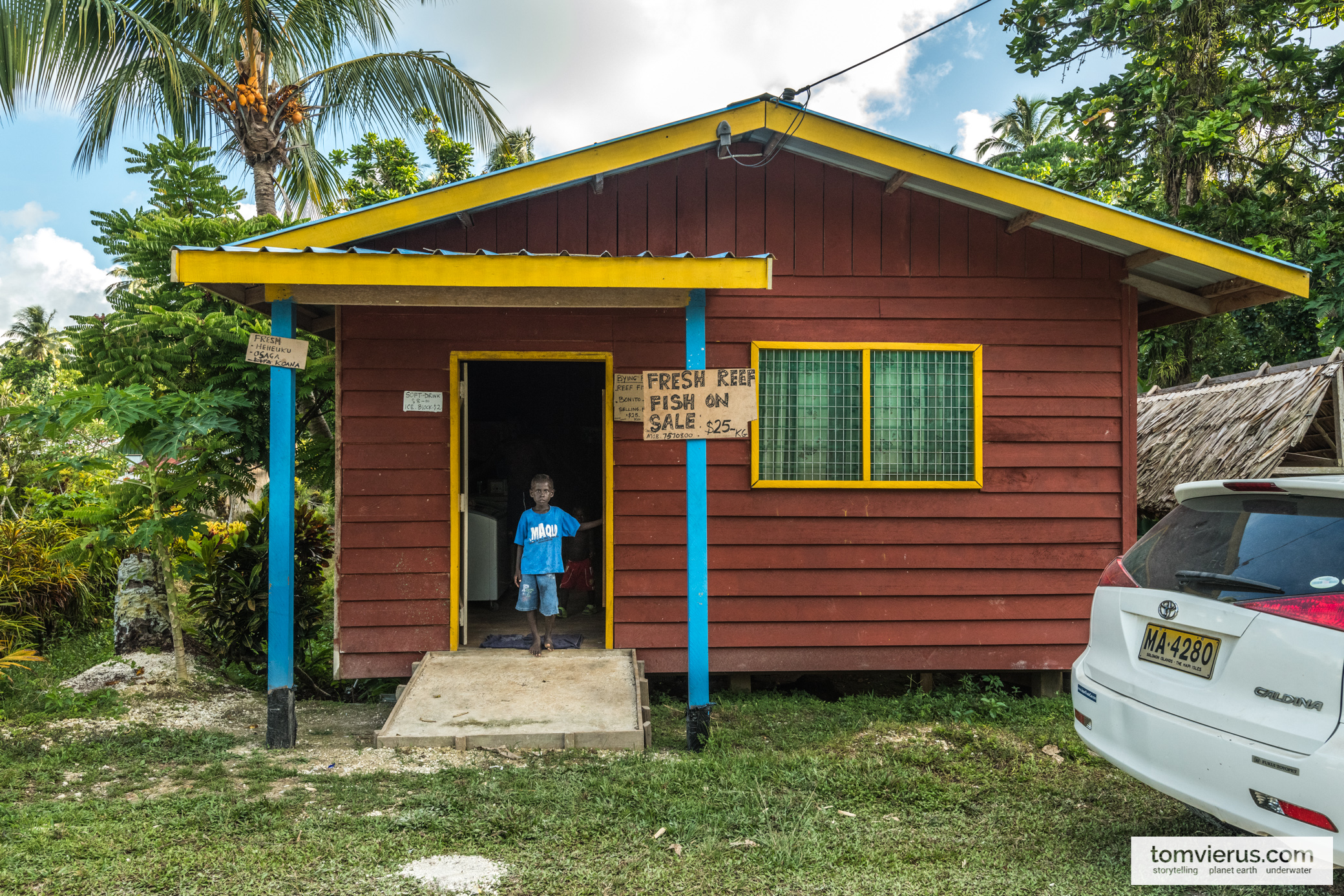 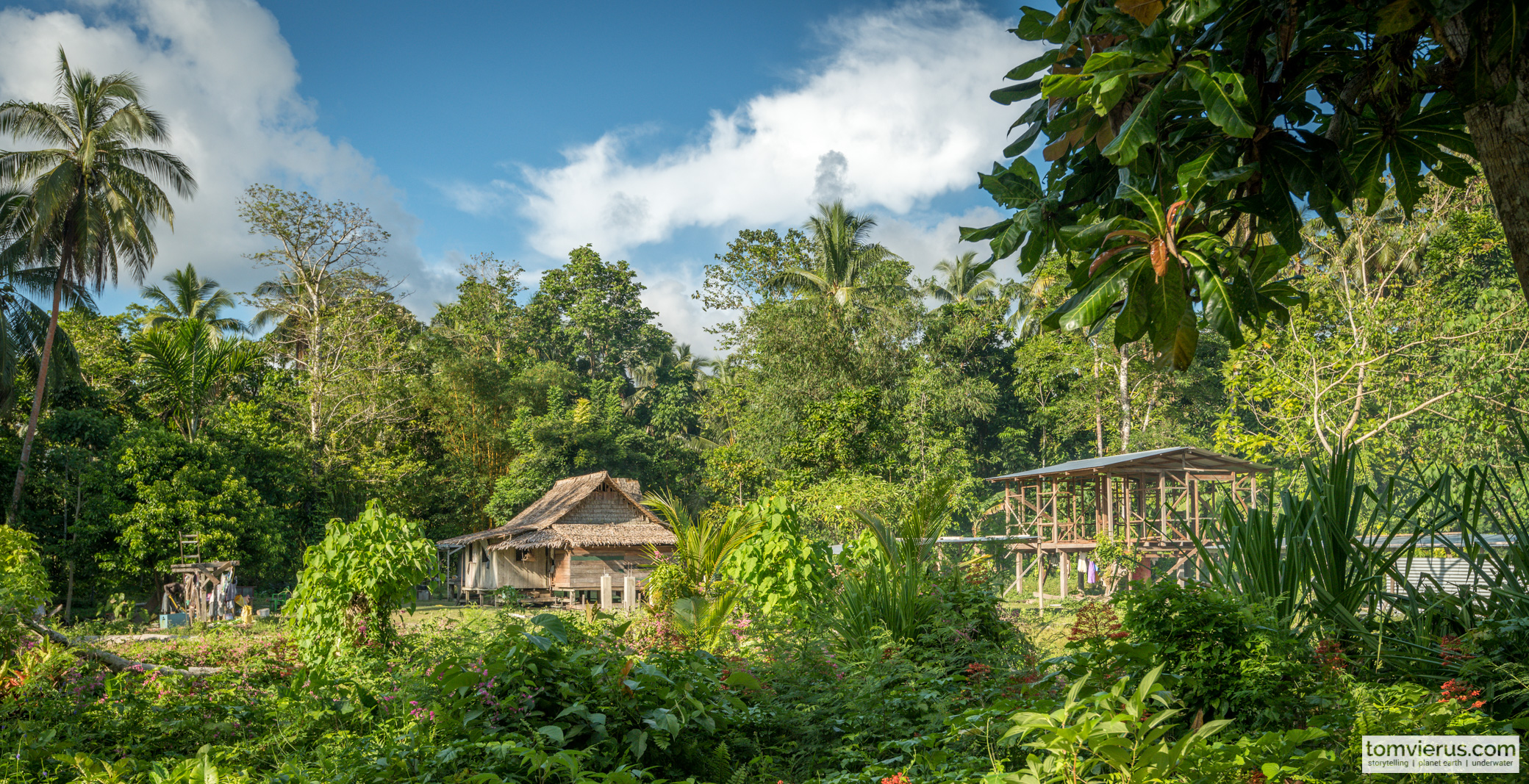 One of the things that struck me during my visit to the Solomon Islands, was the impressive houses. There is plenty wood around and subsequently, houses are pretty big compared to many other Pacific islands I have seen

The problem with logging

The Solomon Islands are unfortunately infamous for logging. Vast amounts of forests have disappeared over the last decades with many of the logging operations occurring under shady or illegal circumstances. The dimensions of cleared forest areas can be well-observed from the air: during one of the flights, I observed vast stretches of land cleared of almost every single tree with only roads being that were used to transport the wood left behind. On our way to Gizo, we also passed several solid-constructed ship landing ports, which are utilized to carry wood to larger ports from where they are then shipped to places all around the world.

Common sights around the lagoon: areas cleared of thier trees, often with a bricked landing site for bigger boats carrying away the precious wood 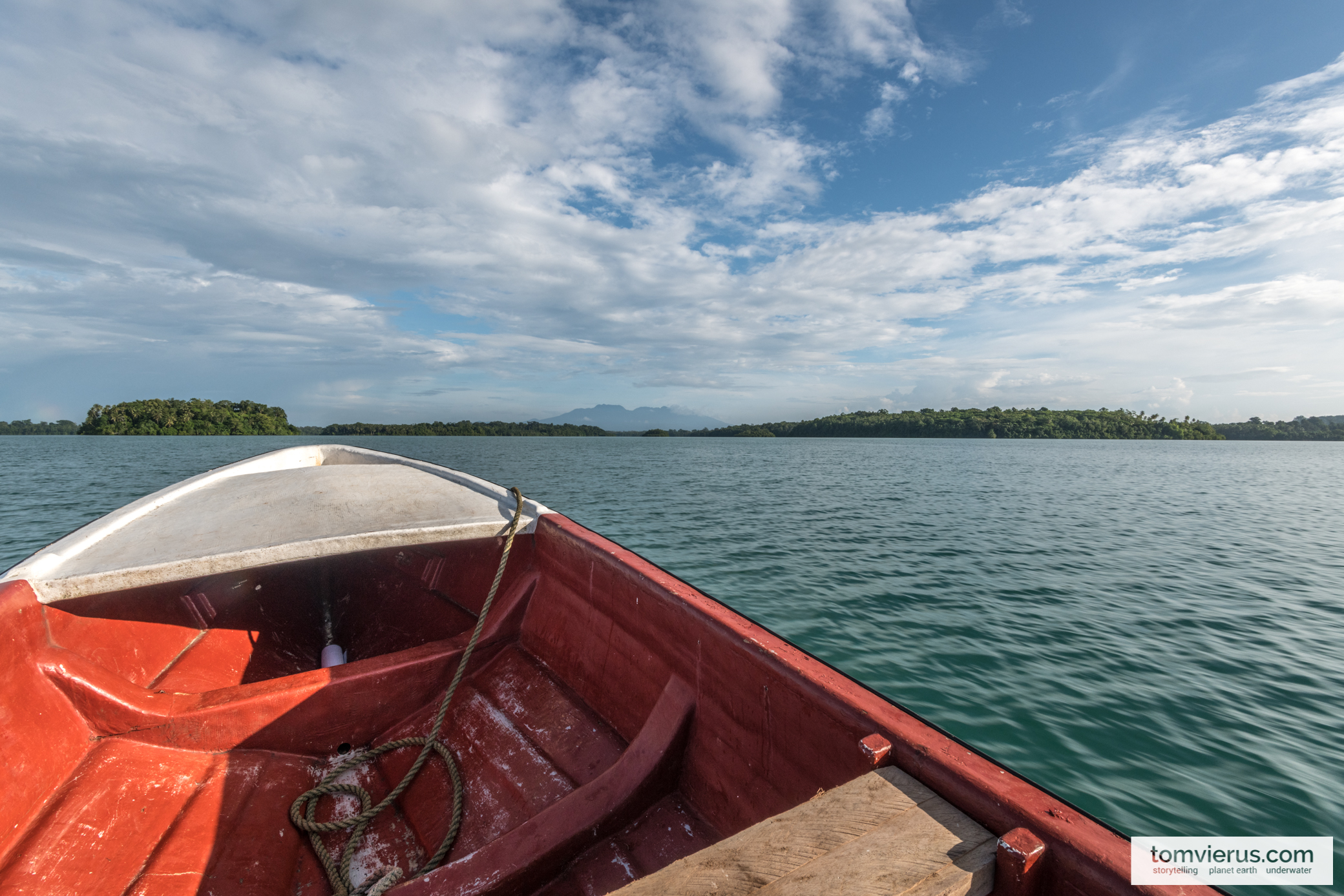 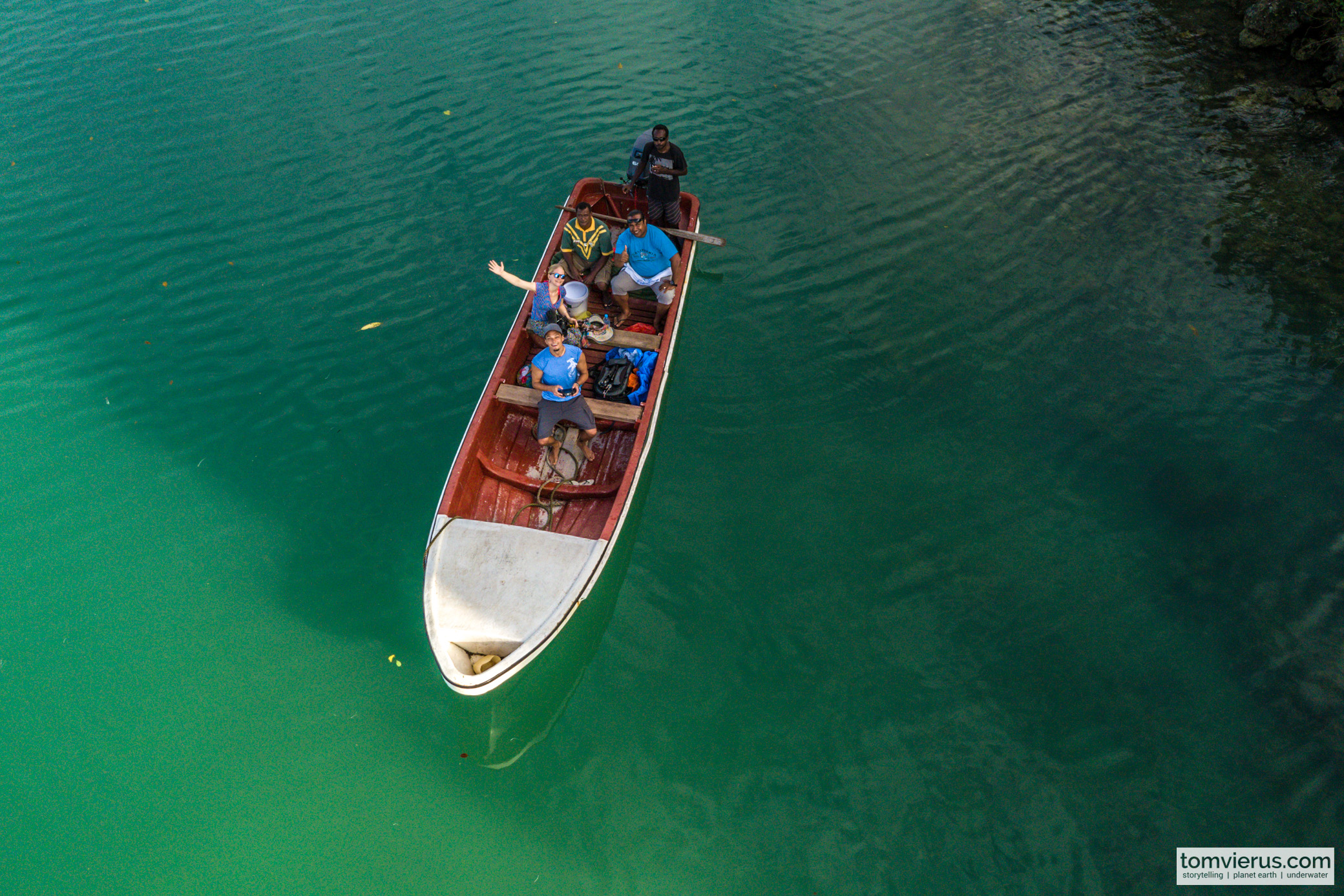 In Gizo, we met with the Provincial Environmental Minister and had a long meeting with him. After explaining the poster once again, a great discussion unfolded with many questions, ideas, and reports shared from both sides. Janne and Akuila had both worked in several communities in the Solomon Islands and one thing he particularly applauded was the integration of local ecological knowledge in their scientific studies. 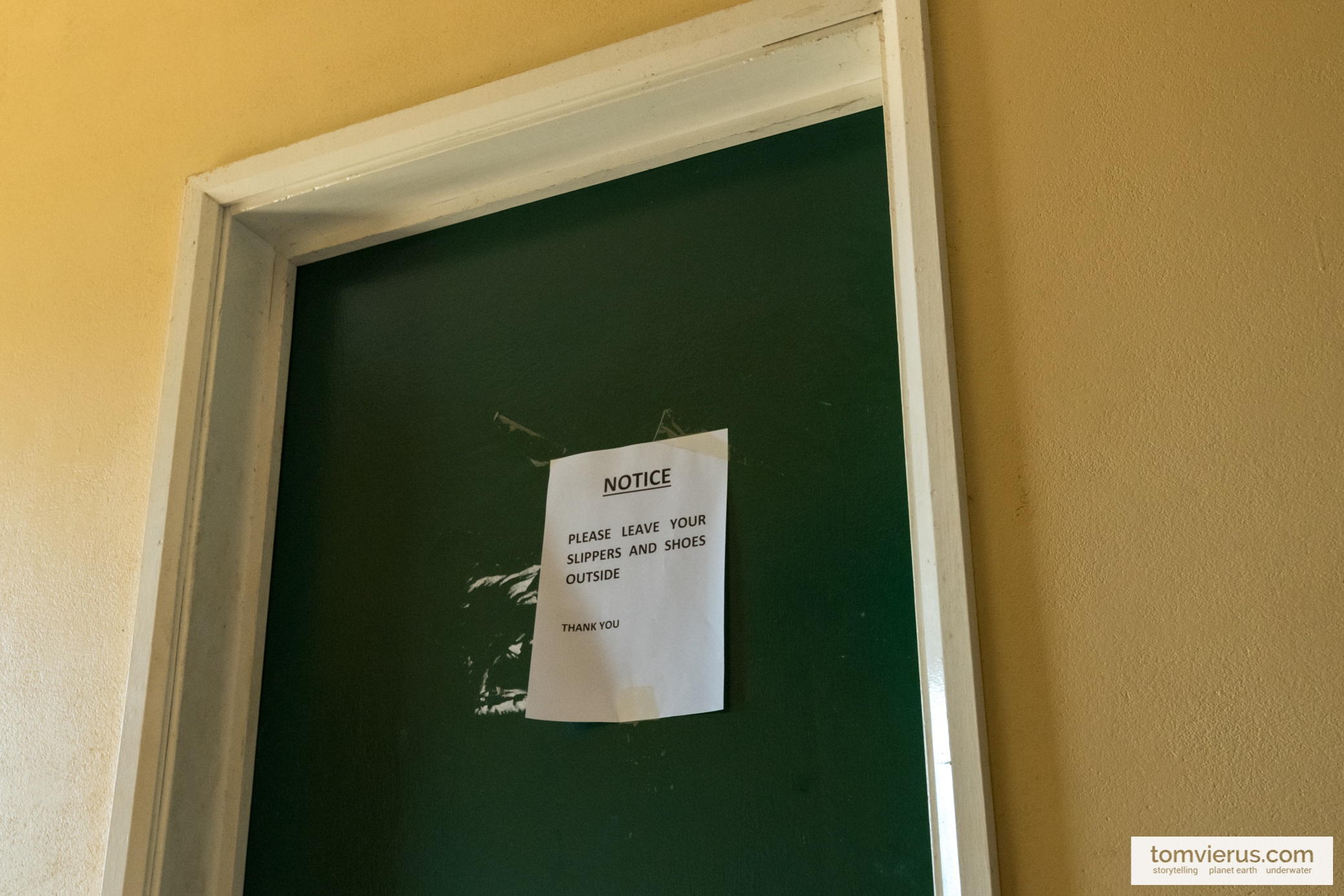 I simply love the tropics.. 🙂 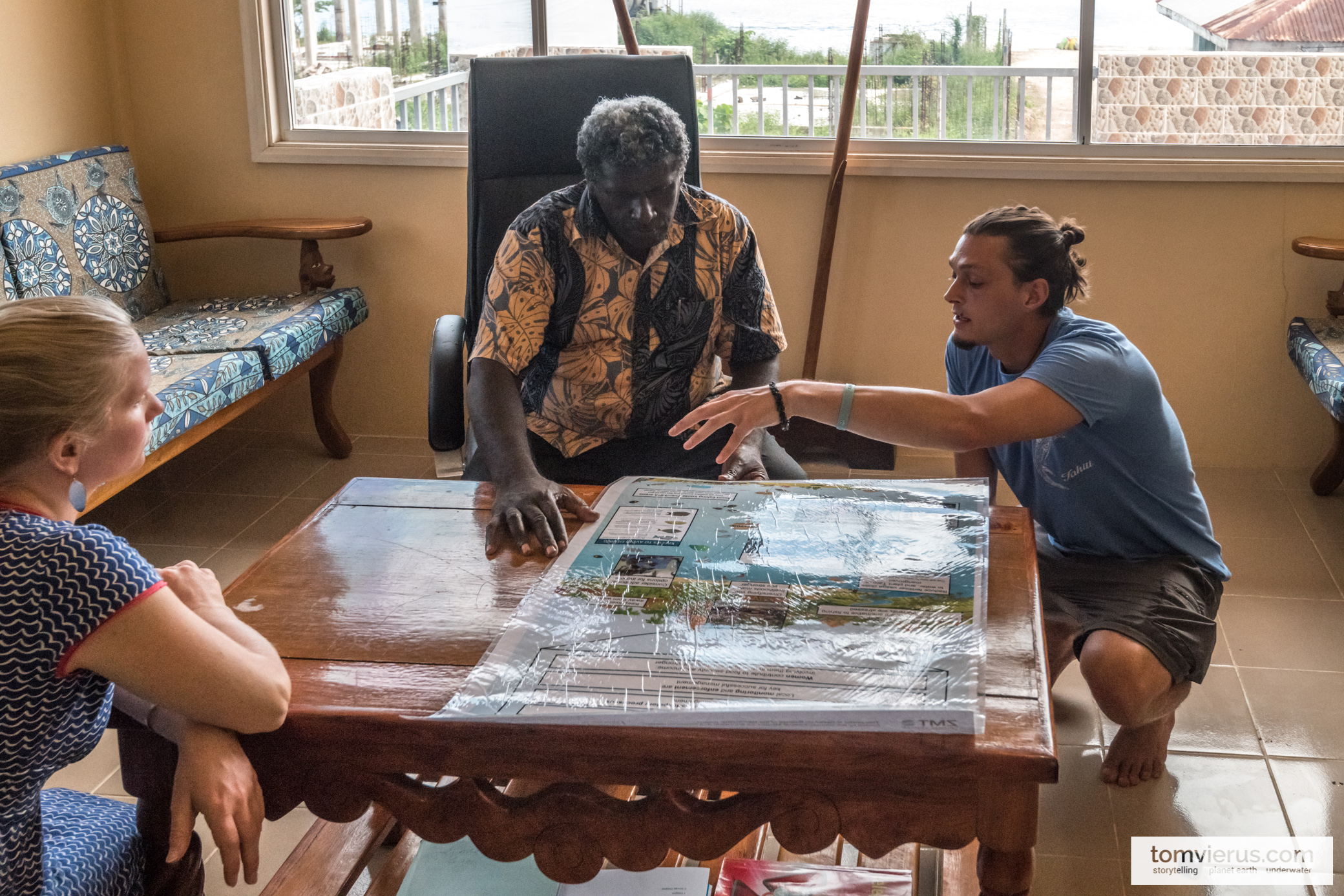 As Amanda wasn’t with us in the Solomon Islands I took over explaining her ecological part of the poster. 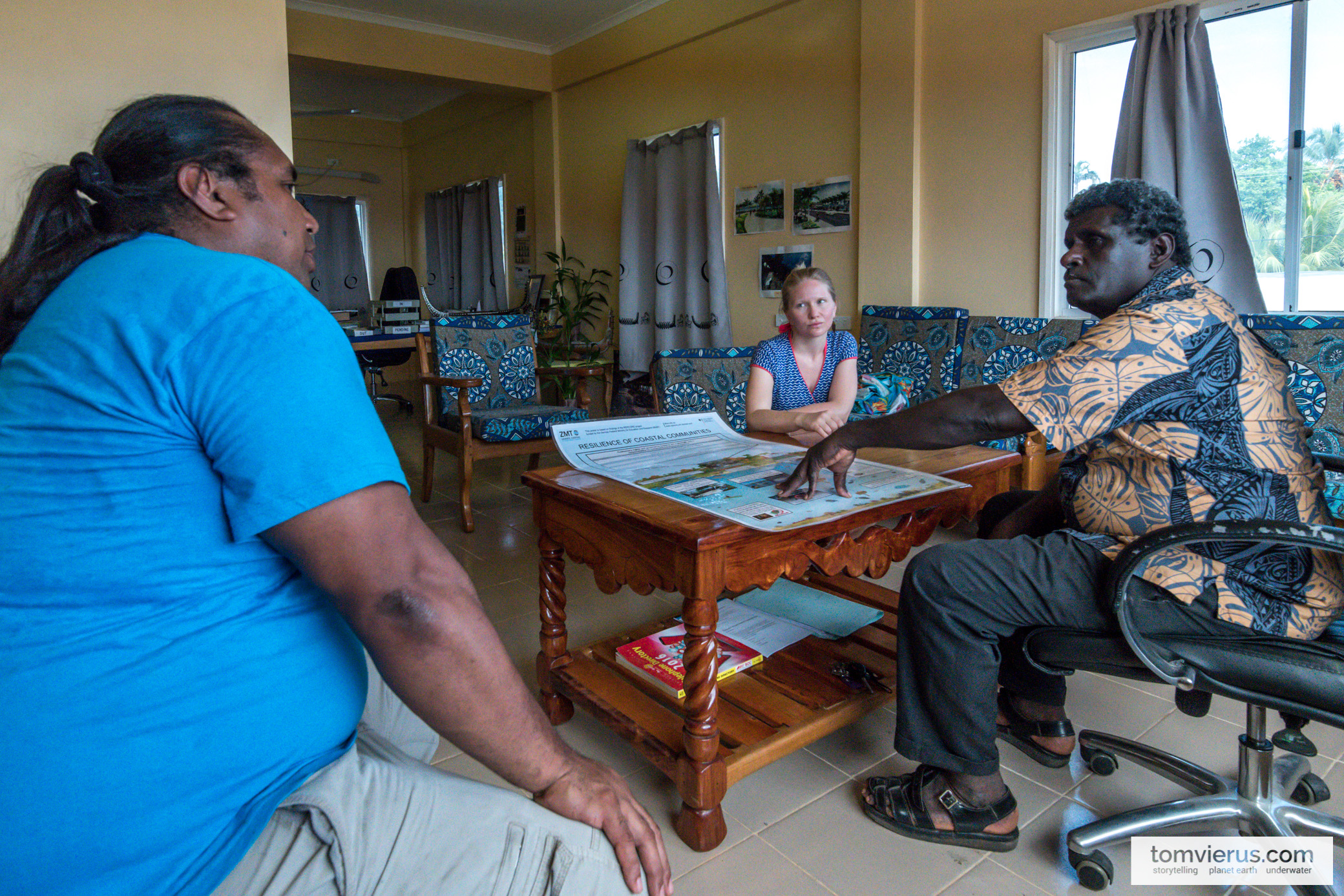 It became clear that one of the major problems threatening this whole region was the logging and the associated side-effects. While land-access to logging companies is often granted by village elders and chiefs, not in all cases do all villagers benefit from the generated income. So misbalanced benefits of these closed deals cause a lot of social tension among the inhabitants leading to non-compliance with local traditions and long-established rules. Additionally, logging operations have a long rattail of ecological consequences. 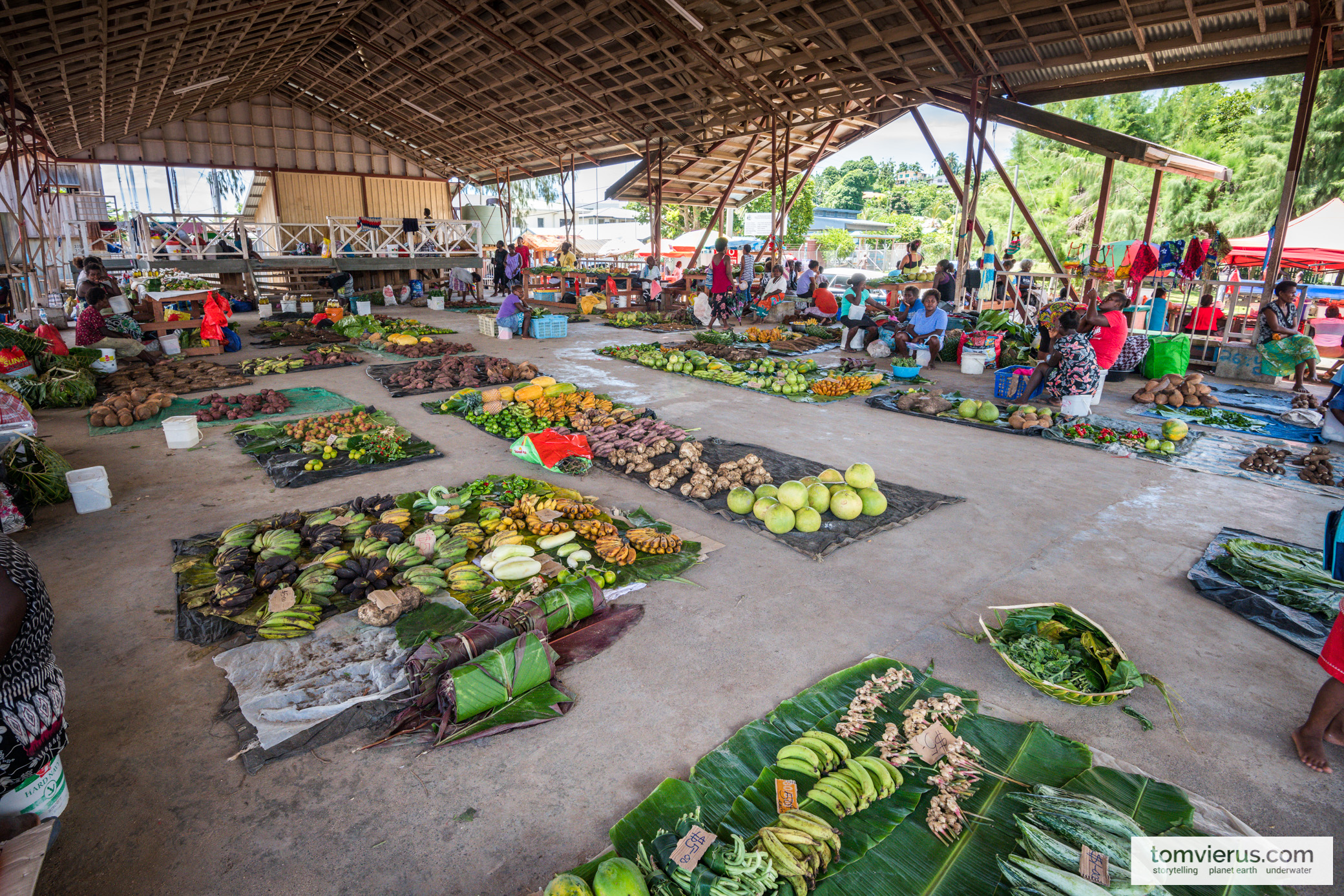 The market in Gizo with veggies I had never seen before! 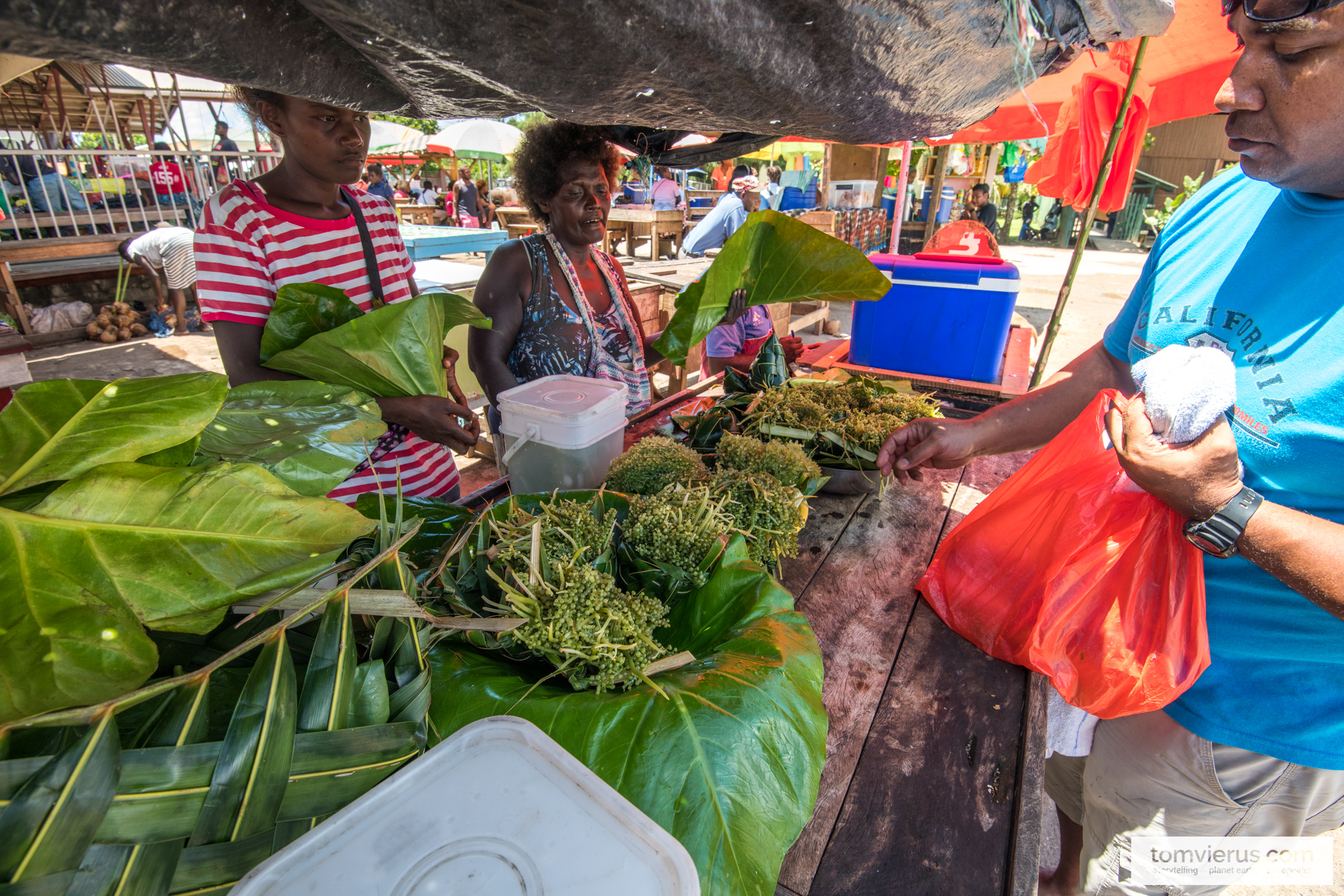 Akuila used this seaweed to cook that delicious vegan dinner.. yummi.. the taste was incredible! 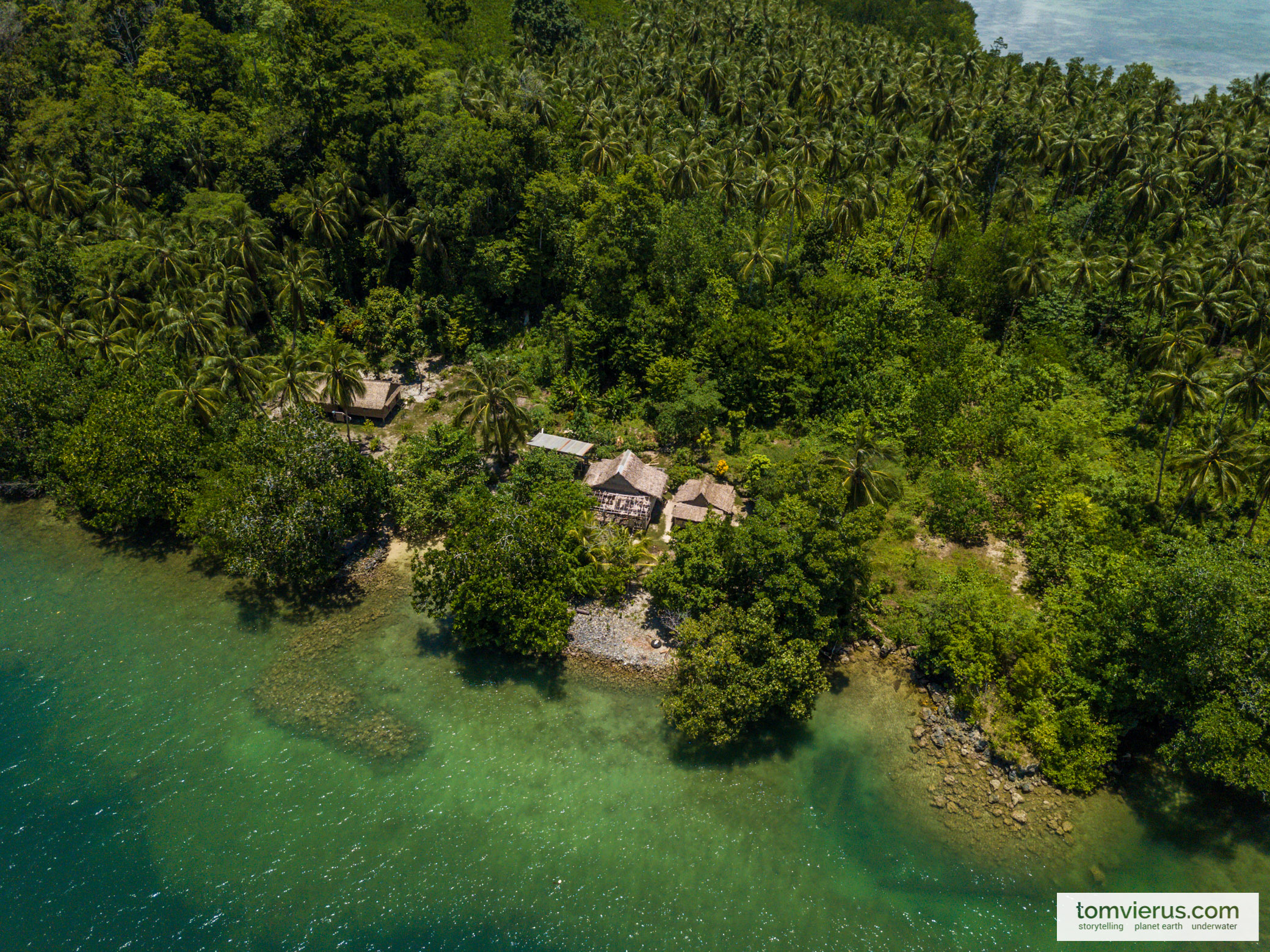 The most obvious is the deterioration of the natural habitat and along with it the destruction of important areas for several animals, plants and other organisms. Along with all that, locals lose a variety of ecosystems services that might initially be offset by the money generated through the access, but on the long run leads to several problems. Besides the clearing of important habitats, the logging causes high sedimentation rates which affect rivers and in turn the lagoon that the rivers flow in. This might lead to coral die-off and eventually again to the loss of a variety of ecosystem services associated with healthy reef and shallow water systems. While money is certainly needed in this region and logging companies offer quick cash, the problem runs deeper and poses great challenges to locals, researchers, NGOs and policy-makers alike.

Stay tuned for the next part!

[…] After a successful day in Gizo and a wonderful boat ride back (including a stop at the famous Lola café, where I was able to snap a couple of images of blacktip reefs shark cruising the shallow seagrass meadows), we arrived safely back in Munda and prepared for the coming two days. Time was extremely limited here in the Solomons and we had to make the most of it. […]

[…] between sorting the REPICORE images, assisting at the Fotoetage and several other side projects, I finished editing the Physioshark […] 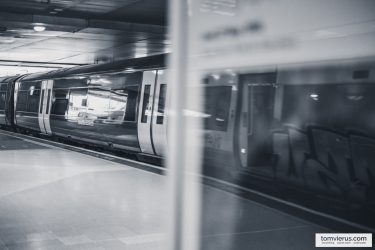 London is an extremely overwhelming city. With almost 9 million people living in and around the capital of the United Kingdom,...