After we landed back in Suva we made our way down to the Coral Coast to spend the weekend in one of the hotels there. While Amanda, Janne and I packed all the gear into a taxi and arrived late at night at our destination, Akuila would spend the coming few days with his family before he and Janne would fly on to the Solomon Islands. I used the time off to spend another day diving with Beqa Adventure Divers and snorkeling the beautiful area just in front of our hotel. 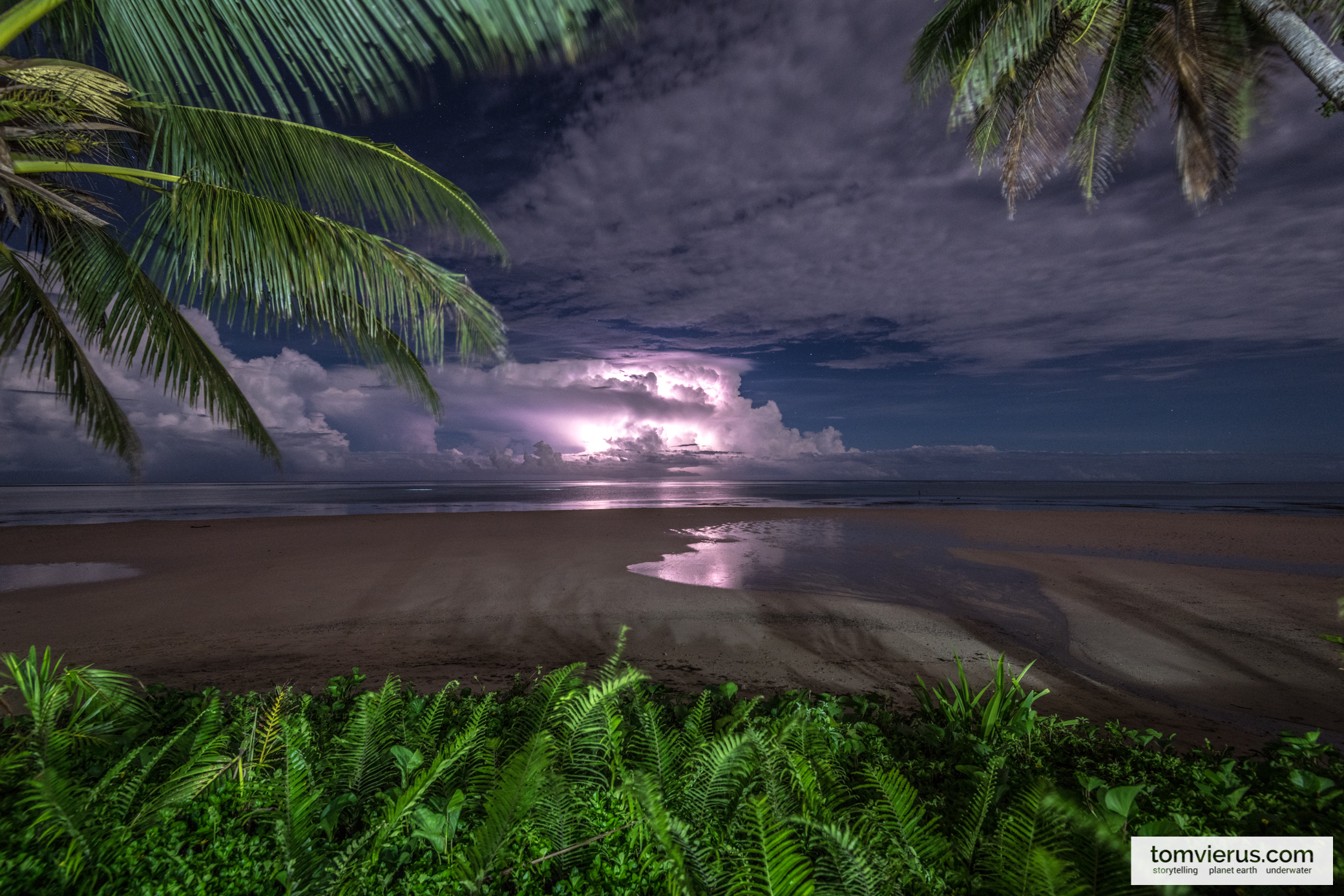 One evening a thunderstorm built up in the distance and I could play around with a few images trying to capture the lightning. 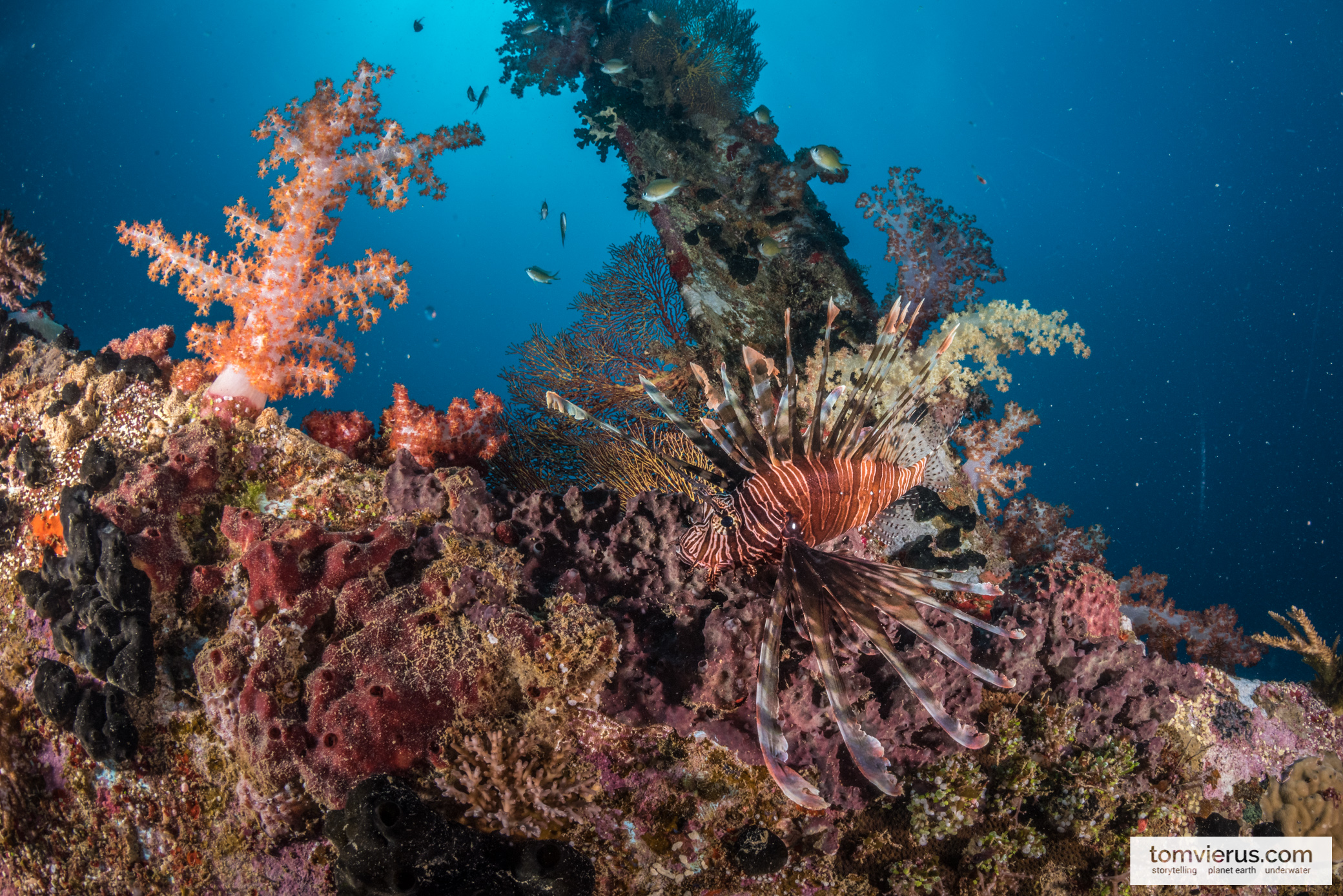 In the following days, I found the most beautiful seagrass meadow that I had ever seen around Fiji. Using the macro and the wide-angle lens, I undertook several extended snorkels. On the last day one of my Inon Z-240 strobes flooded – somehow the o-ring between the cap and the battery holder wasn’t tight and a couple of drops of saltwater entered the interior. It wasn’t until after the long snorkel that I noticed what was wrong and then it seemed too late. Even after a thorough freshwater rinse and a long rice-bag period, the flash remained broken. Unfortunately, yet another loss after the drone had crashed on Ovalau. 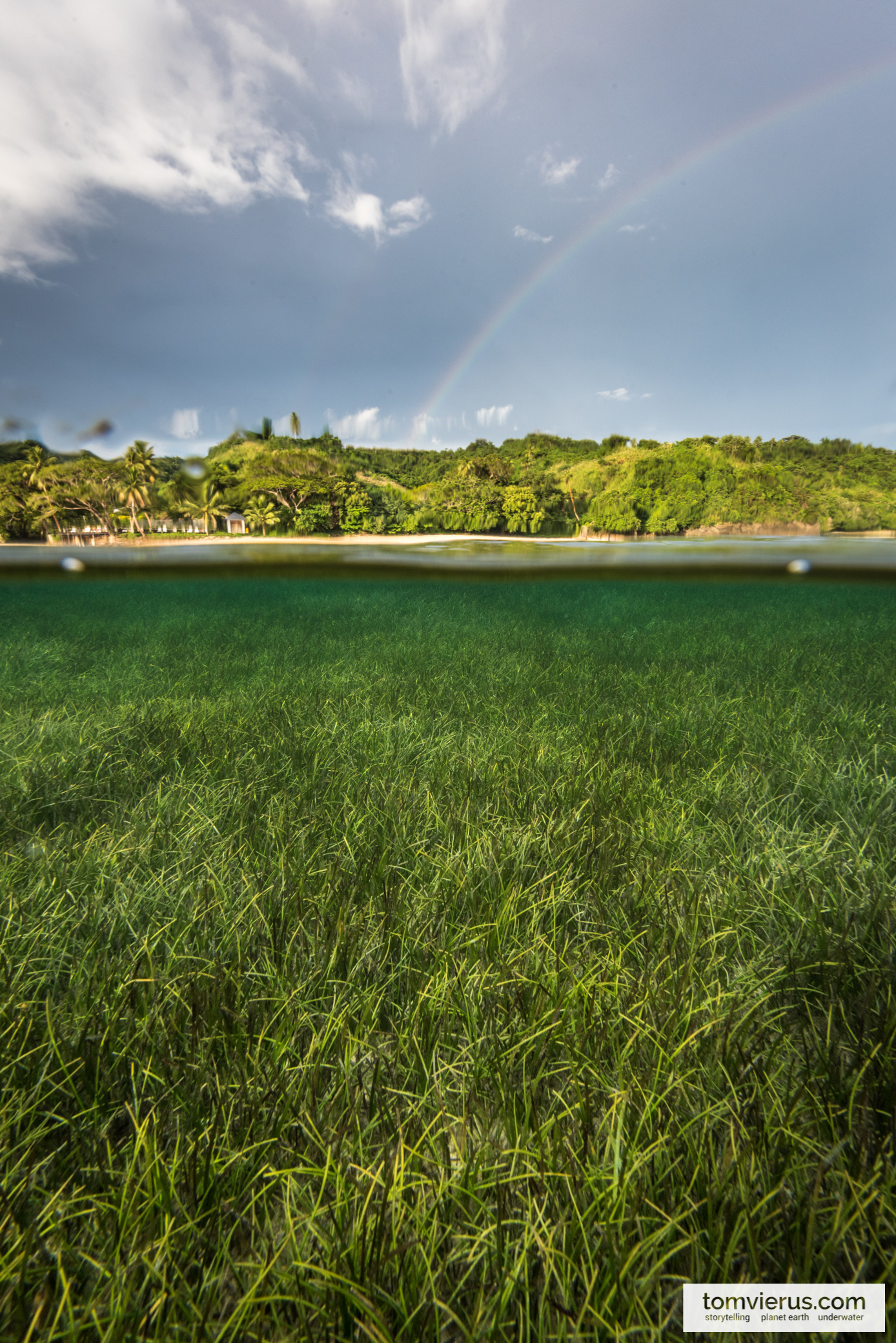 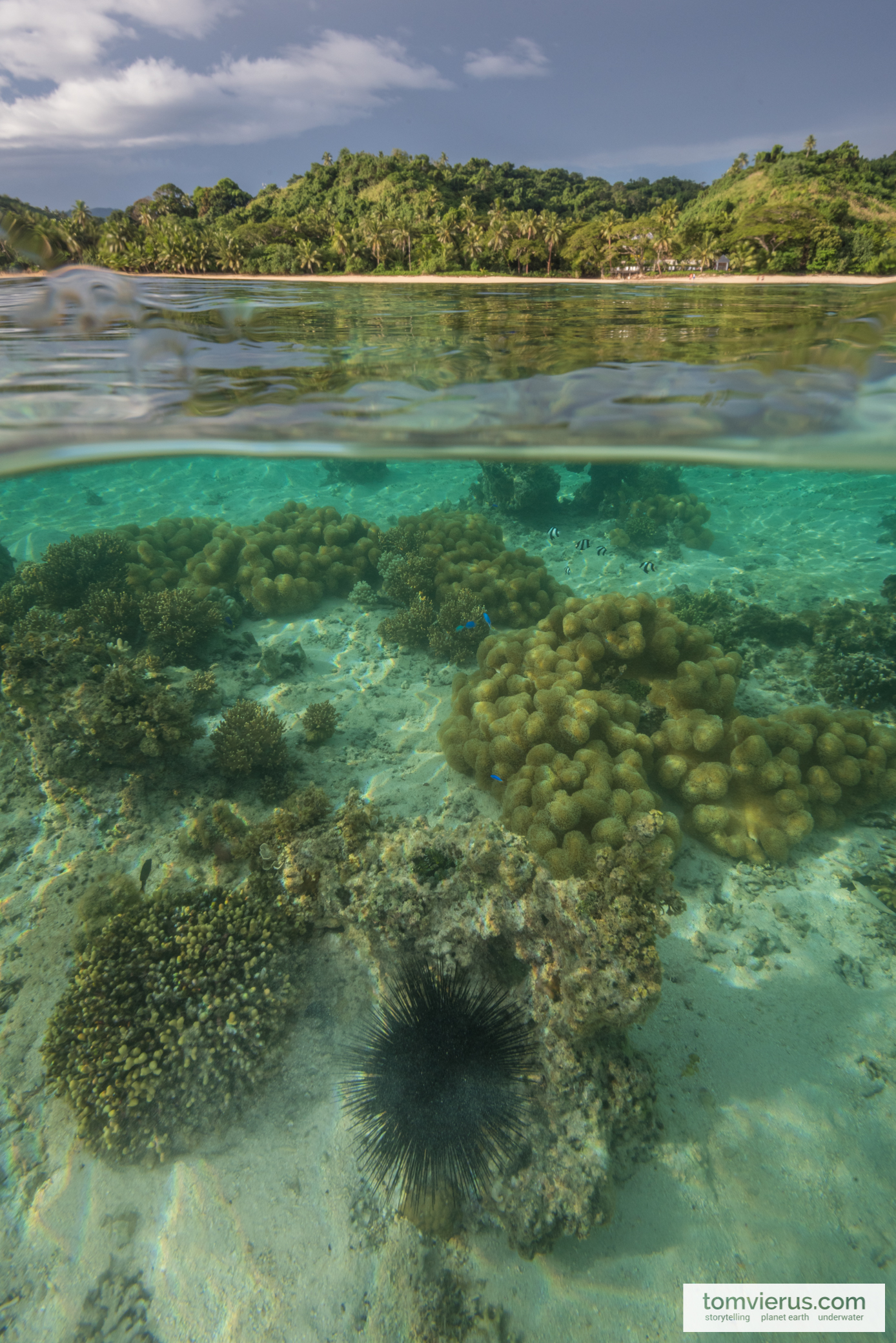 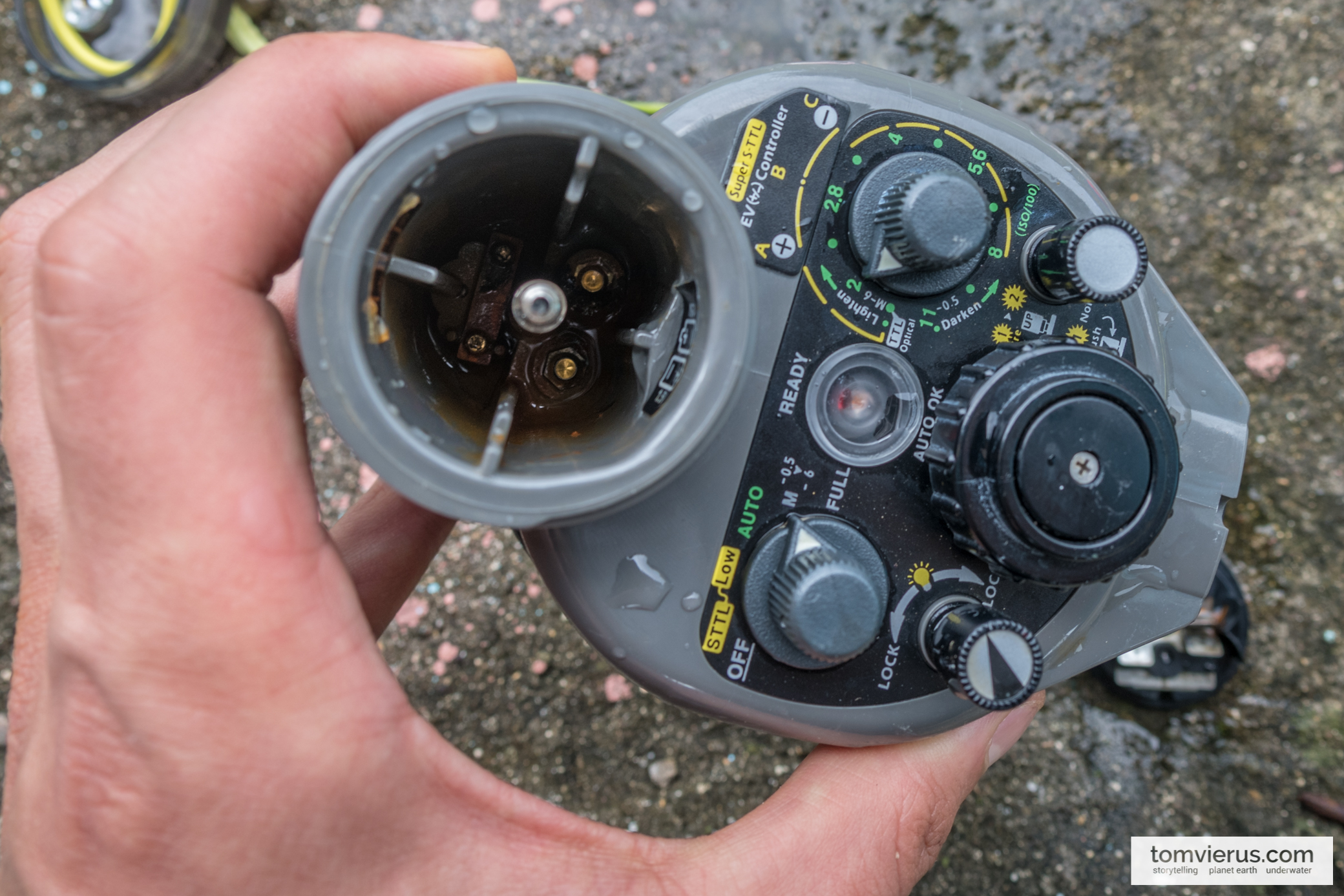 Despite all attempts to save the Inon strobe, the contacts had already corroded.

On Monday morning, Amanda and I drove to Navua, a small town about 30 minutes from Suva, where we met our contact Bosse. Amanda and some master students had worked with him in the past when they surveyed several inshore reefs around the island of Beqa in 2015 and 2016. Depending on the swell it is a two-hour crossing to Beqa and it can be pretty rough. After getting several supplies for the village as well as the obligatory kava, we boarded the 7m fiber-glass vessel and started our journey early afternoon. First, we made our way downstream the Navua river and once on the open ocean it didn’t take very long until everything was soaking with water – including us. Our gear was safely shielded under several layers of large plastic sheets, but we had to just endure the water. Facing backward eased the spray into our eyes and besides all that the boat ride is extremely beautiful (but can be quite intimidating). 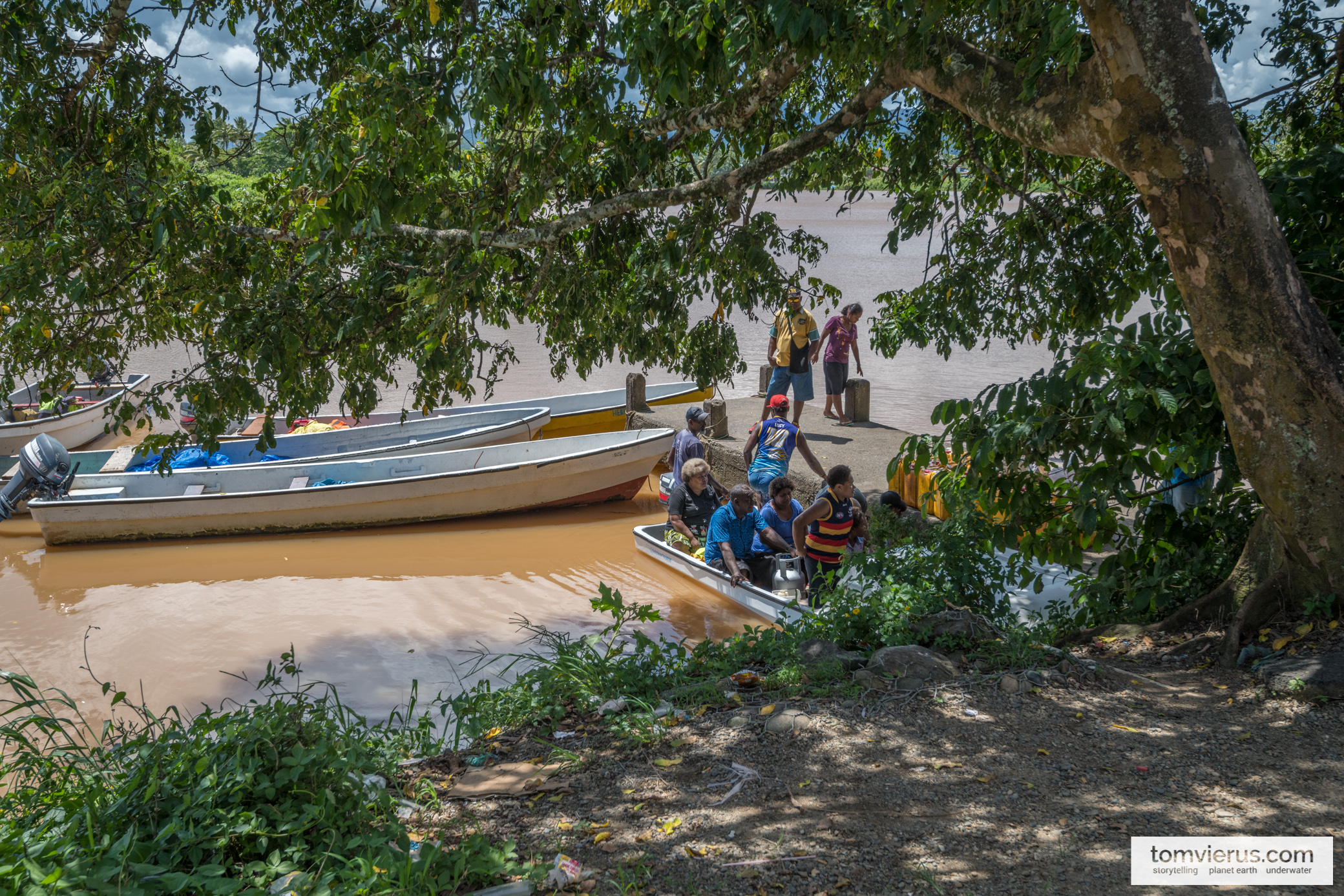 From Navua, a little town just 30 min from Suva, fiber-glass boats load up to cross to Beqa 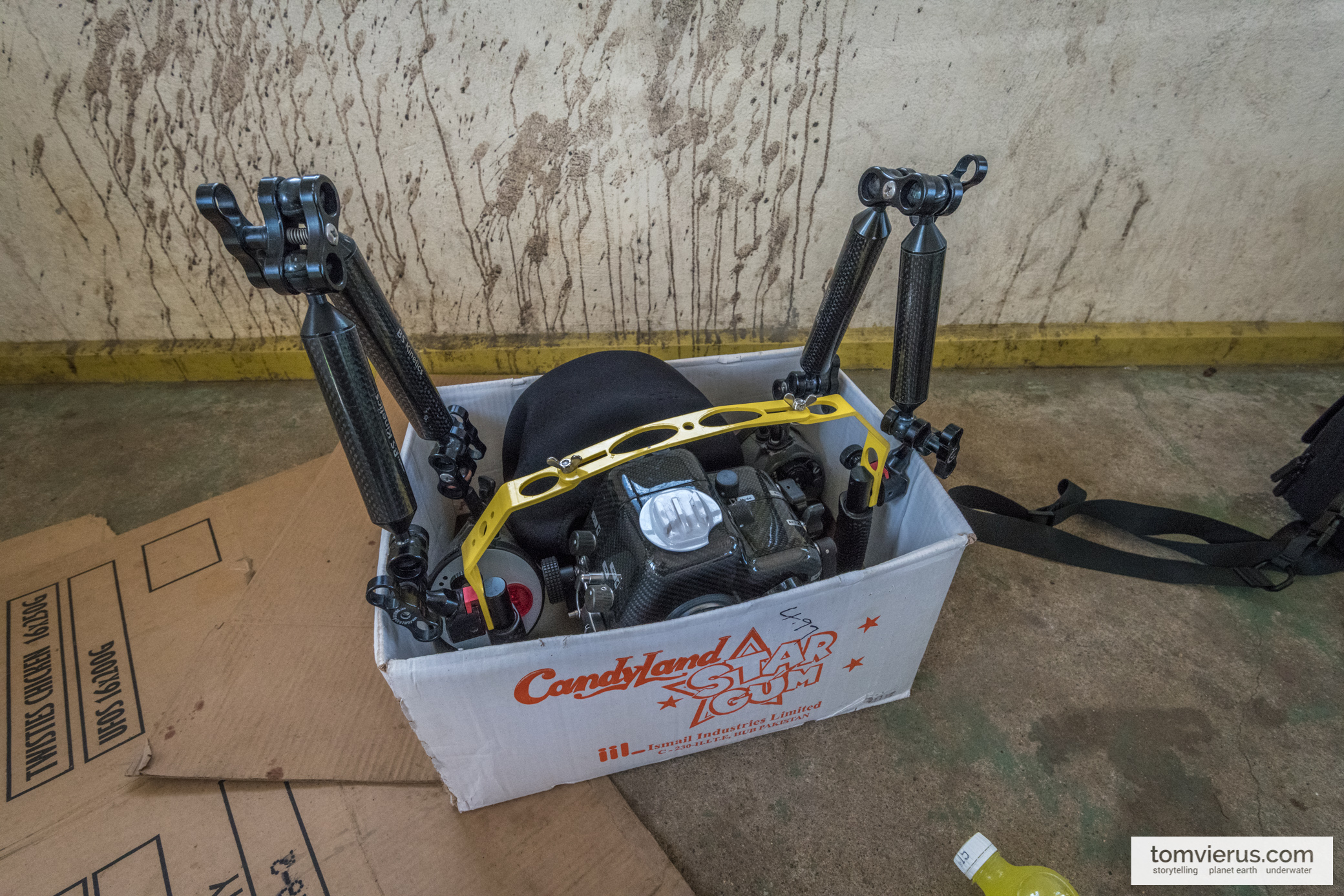 Sometimes I have to be creative.. A carton box is better than no box for my housing. 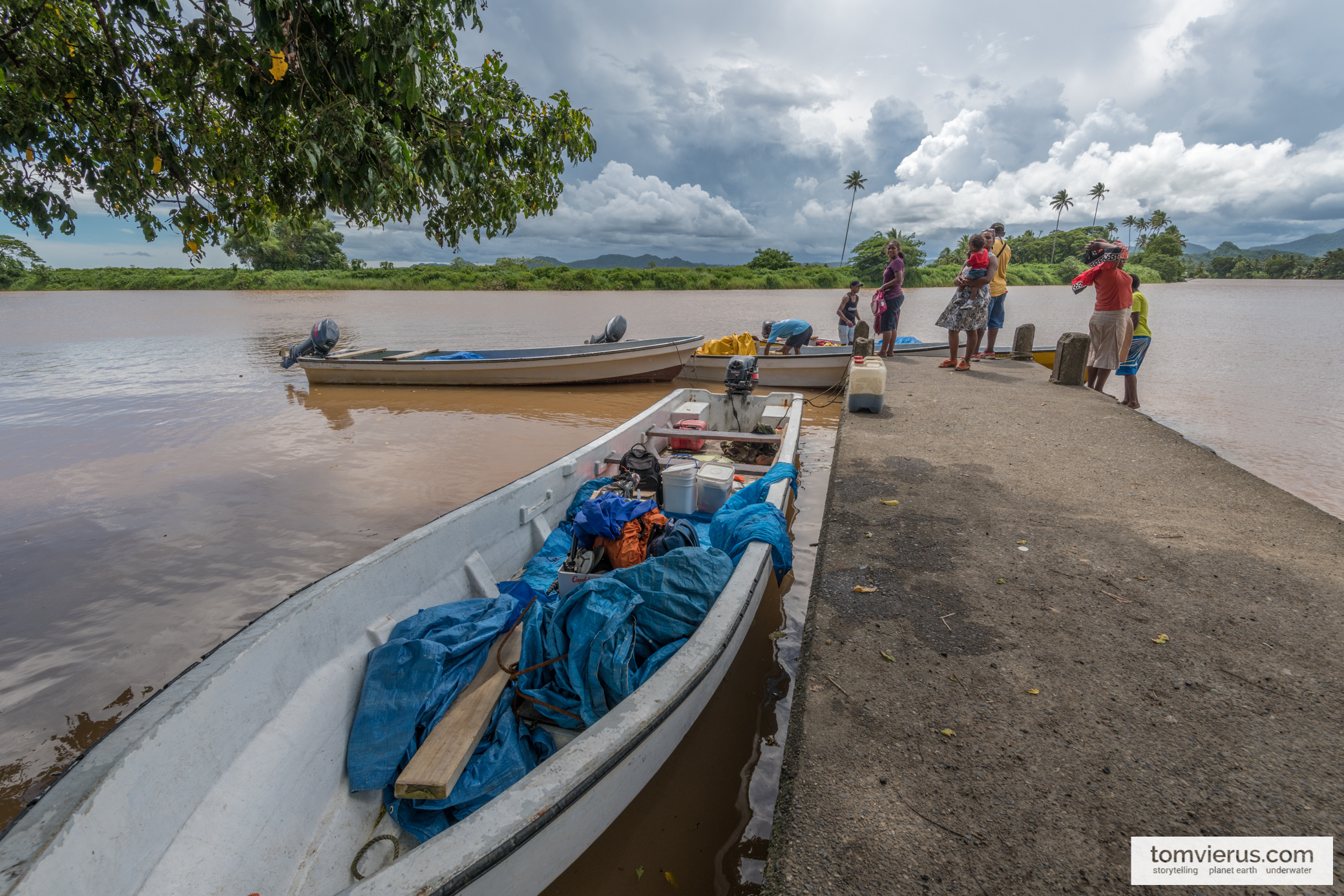 Gear loaded and ready for the crossing. The sky doesn’t look comforting..

During our last stay in Fiji, in 2016, I had already joined Amanda once on Beqa and neither of us will forget that particular crossing: an incredibly large swell let the boat rise and sink several meters every time we passed the never-ending water mountains. This time we were luckier and after all, we trusted Bosse’s judgment: he’s been doing that crossing his entire life and if he judges it’s good to go, it is good to go.

A panorama towards the ocean during low-tide.

Bad timing – a village in mourning

We arrived in Dakuibeqa, one of the two villages the REPICORE team had worked in. By now the headman had changed, and Amanda and I met him for the first time. Unfortunately, just the night before someone had passed away and the whole village was in mourning. While usually the first night would have been spent discussing the project’s findings with the village elders and other leading villagers, we could not bother them now and had to postpone the sevusevu ceremony to the following day. The newly appointed headman and his wife offered us an empty house in the village and stayed with us for several hours. 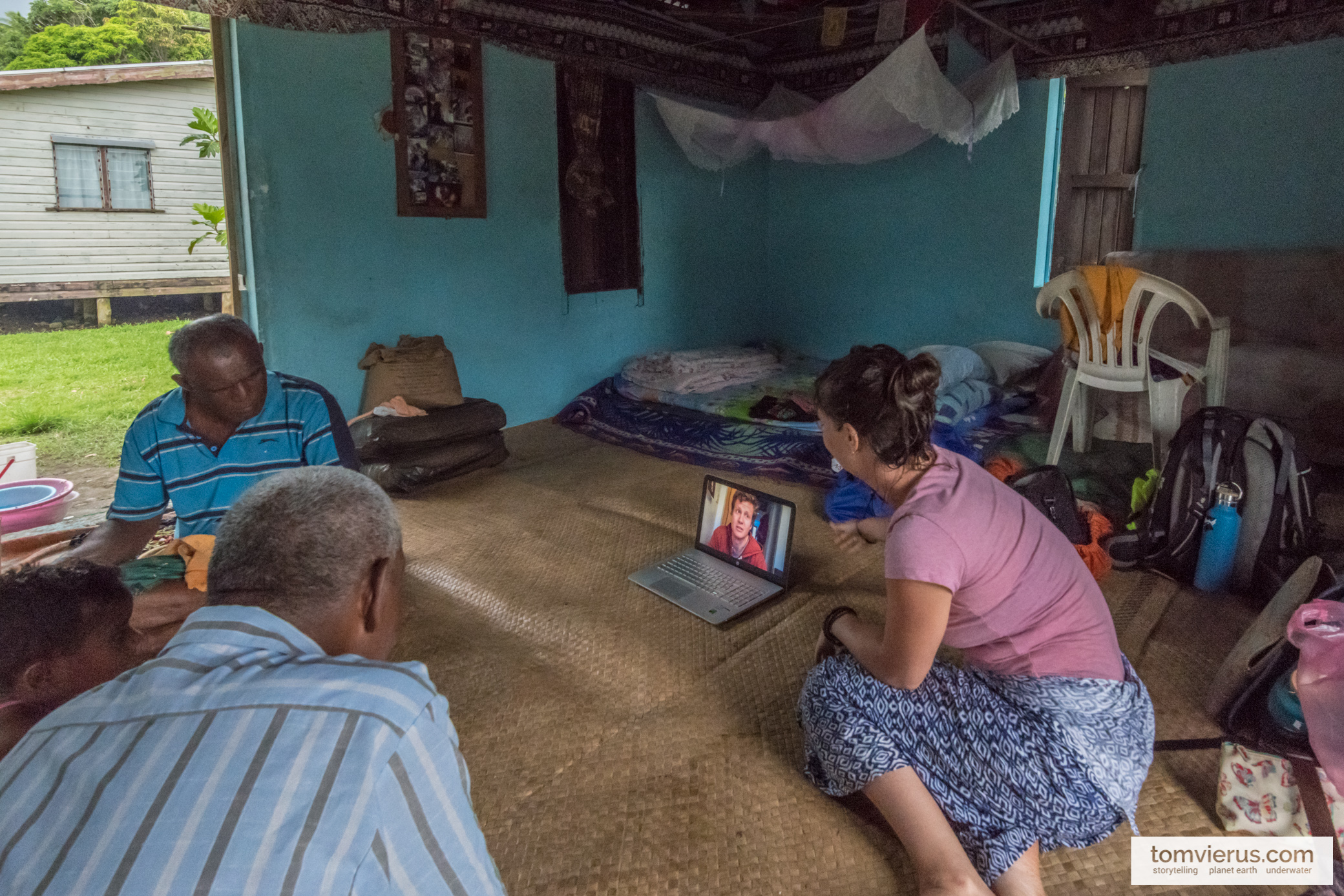 After contemplating how to best approach the issue, the headman proposed to already have a more private discussion in the small house instead of a bigger meeting in the town hall. We followed his recommendation and sat down with him and Bosse explaining the poster and all associated findings. We also showed a film I had produced prior to the trip with messages from the former master student Andreas Eich, as well as Dr. Sonia Bejarano, both of whom had worked in the village and were well-remembered there. The video showed both summarising their main findings and sending their warmest wishes to the village and all its inhabitants. It was a great pleasure to observe the villagers being touched by the videos and until we left Beqa we watched the video several times again with a great number of people. 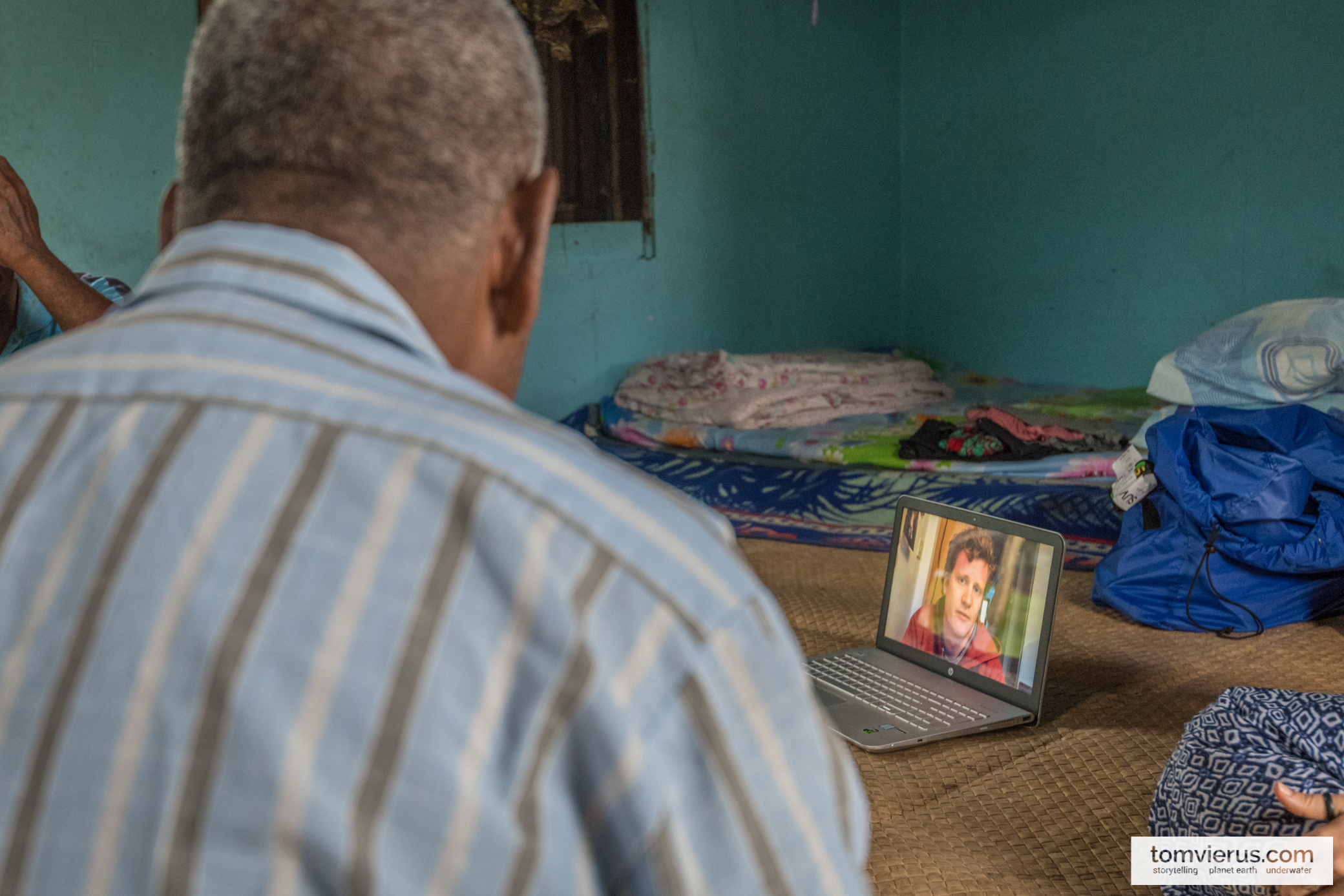 Little things can make a big difference. Andi’s film made the villagers extremely happy and put smiles on their faces while also informing them of Andi’s findings from his time in this village.

Sevusevu in the morning

Later that night we still met with Manassa, tragically the brother of the passed person. He was, of course, happy to see us and especially Amanda, since he was the local assistant working with the team for many weeks. He told us that the following day he would take us on a tour to show us some developments around the village and we gladly accepted. After long talks with the headman, his wife and other people joining in and out the conservation in our house, we finally went to sleep in the mosquito-infested bed area. 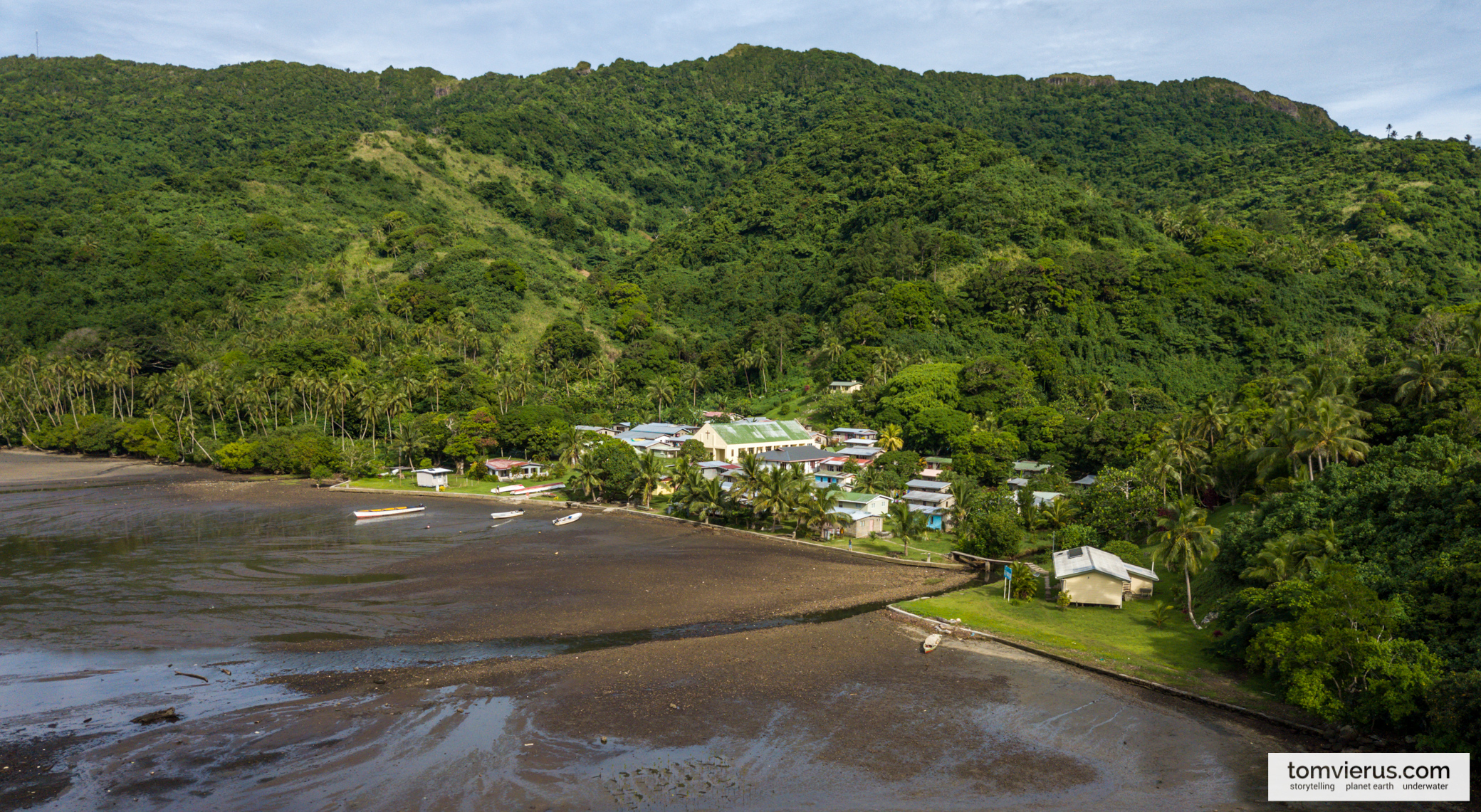 The little village is situated in a bay in the south of the fertile Beqa island and surrounded by thick forest.

The morning starts early in Fiji and especially if your house cannot be properly closed. Around 5:30 the first people started peeking into our house checking if the two whities were still sleeping. Having been bitten about a thousand times each, we were happy to rise to a new day and had some breakfast with the headman’s family. Afterward, we put on our Zulus (traditional Fijian skirts) and went ahead to complete the sevusevu ceremony to be officially welcomed in the village and receive their blessings. At the same time, we asked the village chief to pass another kava to the neighboring village, where the team had also worked. Unfortunately, the representatives were not able to join our meetings due to the death which had affected several families in that village as well. He gladly accepted and promised to deliver the kava and poster along with the explanation we had provided them. 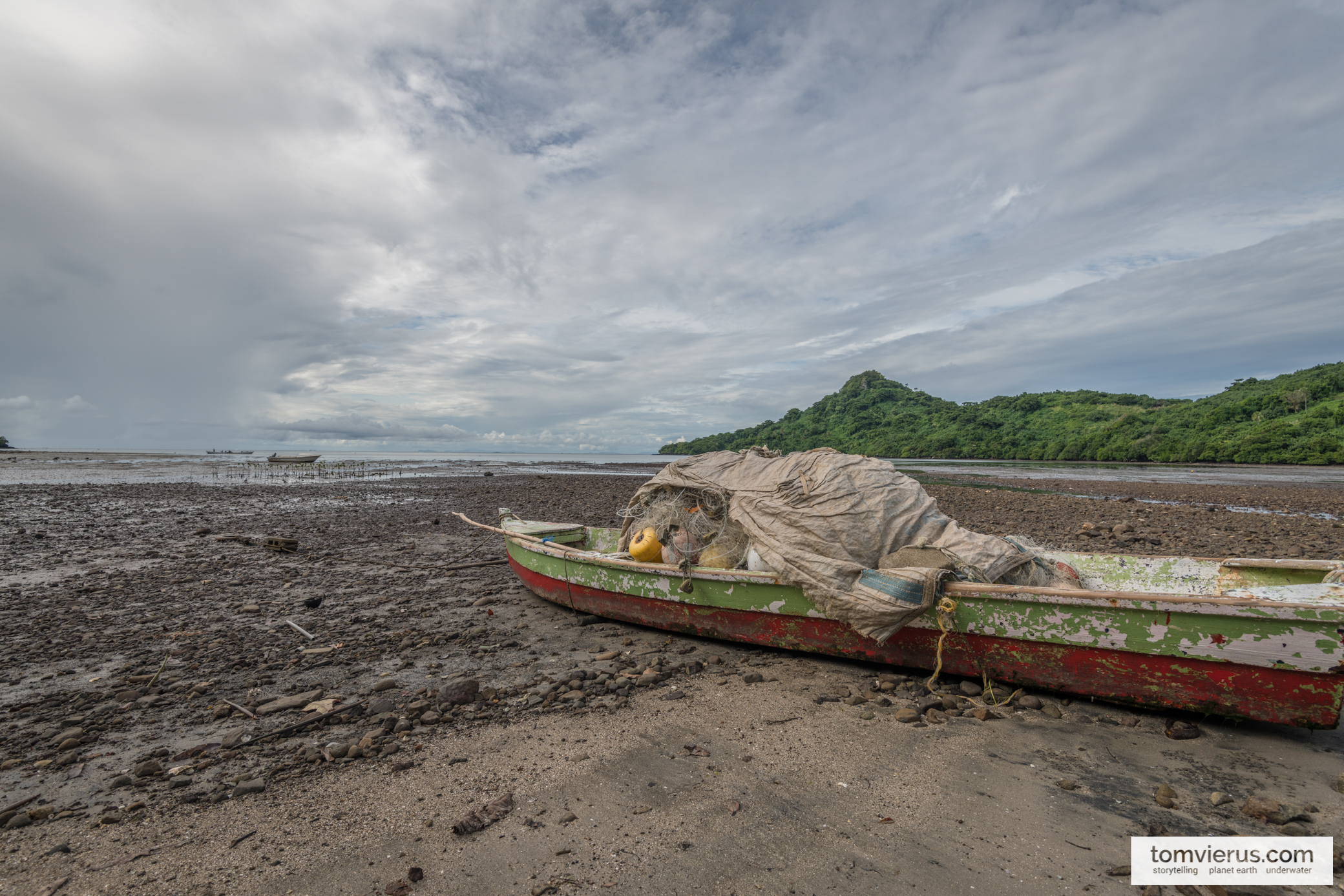 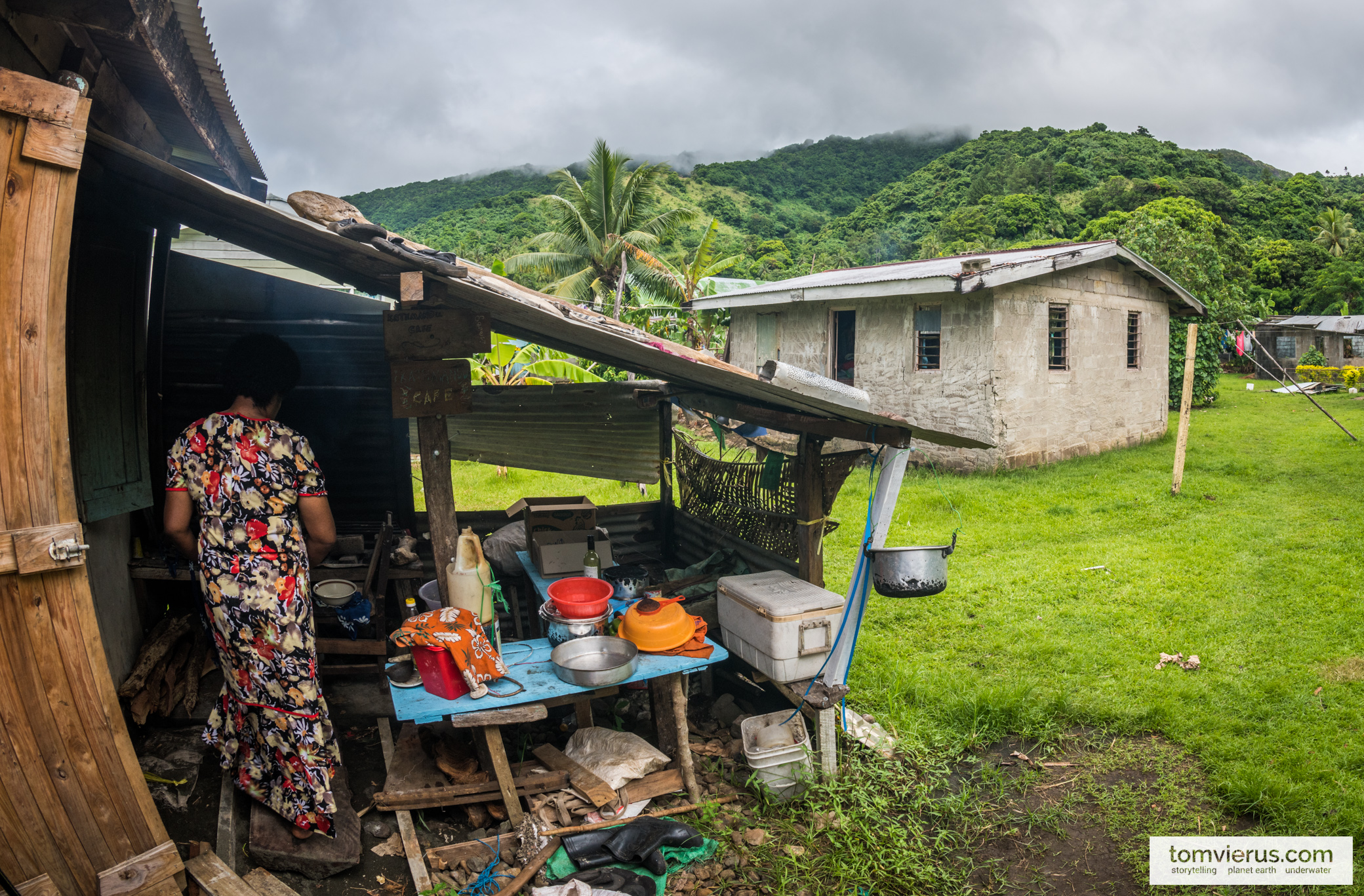 If you’ve read the first part, you know that my Mavic drone had crashed into the sea on the island of Ovalau a few days prior to our trip to Beqa. While I couldn’t retrieve the drone, I was able to borrow a drone from a good friend. Gauthier, who is also the lead scientist at the local Projects Abroad Volunteer Program, was kind enough to play my life-safer and to enable me drone footage for the rest of our Pacific trip. I recorded a few scenes and as usual, created a huge interest among the villagers before we joined Manassa for a walk to the newly planted mangrove fields. 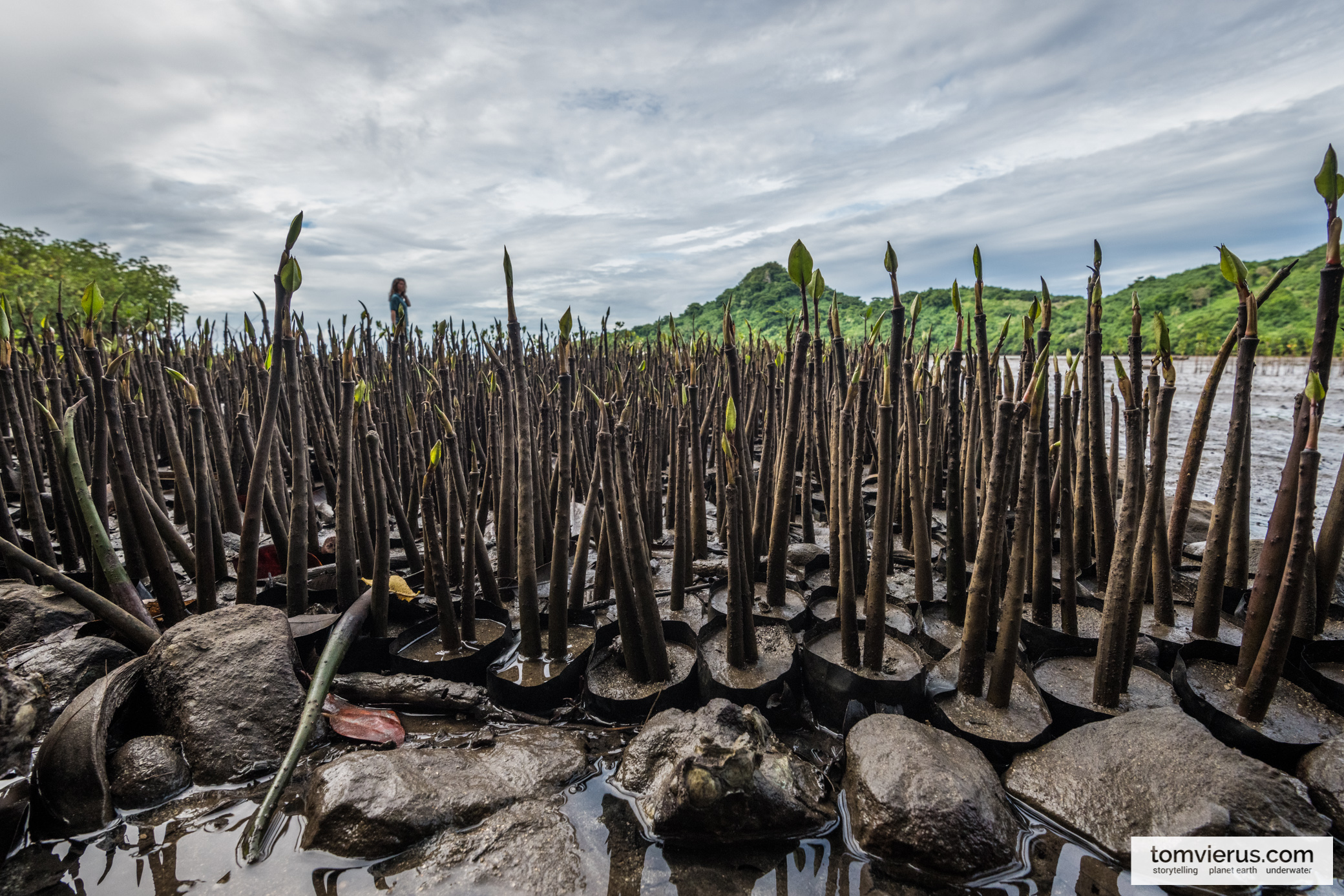 The newly implemented mangrove planting is a great way to add additional village income and to improve the water quality within the bay. 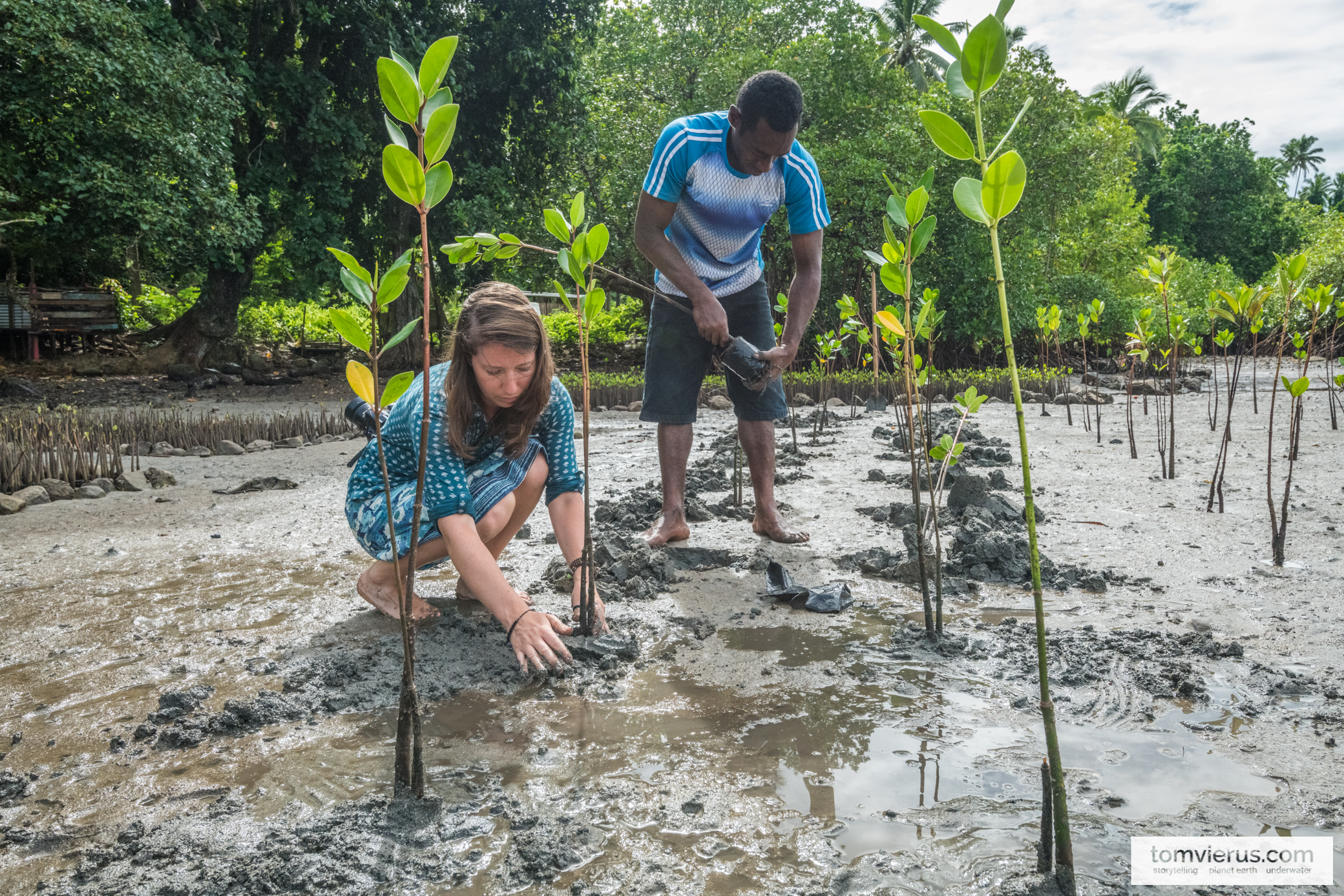 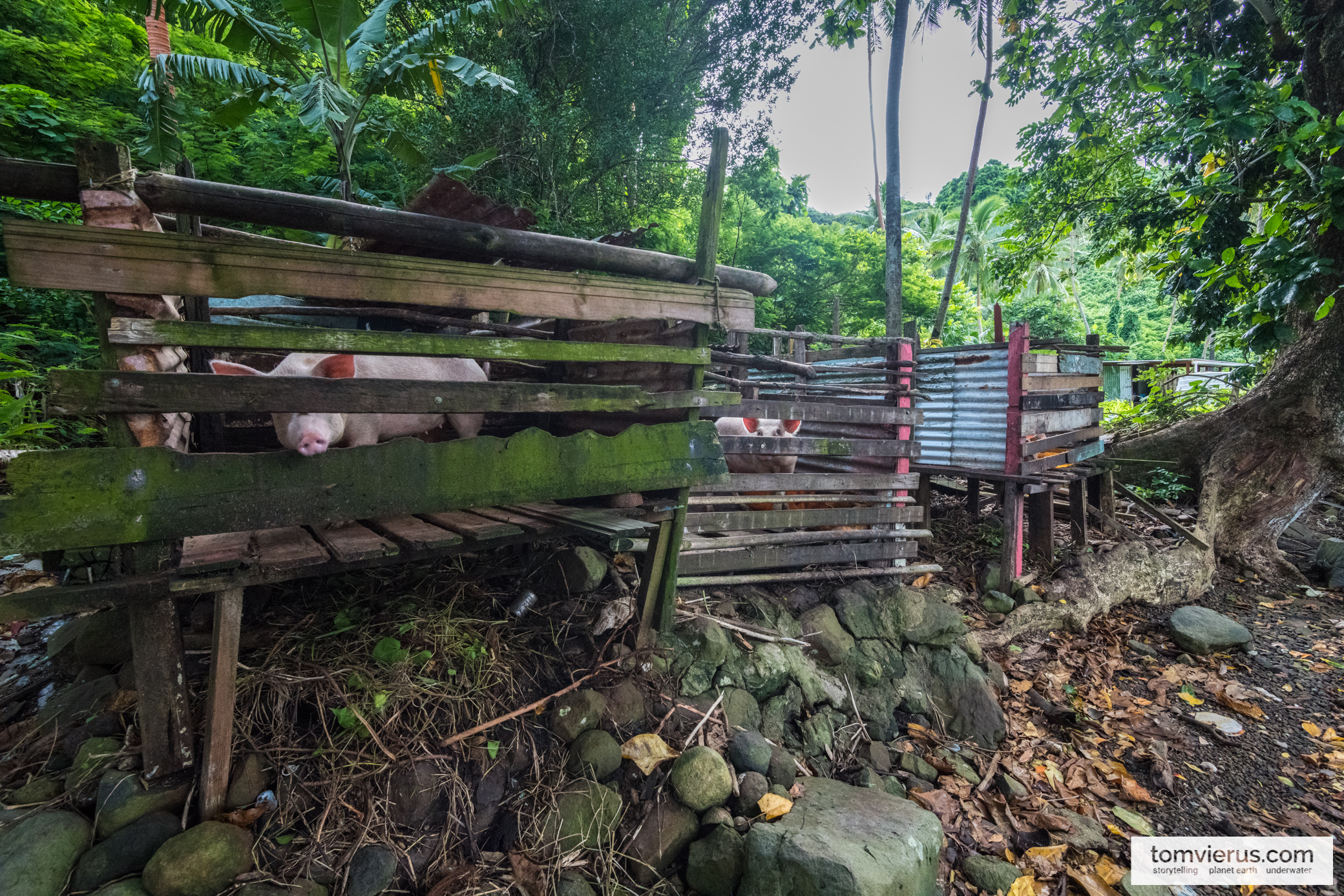 The headman had already told us that the village of Dakuibeqa had started to grow mangrove seedlings about a year ago after they were approached to grow several thousand seedlings that would eventually be delivered to outer Fijian islands in the Lau group. Besides being able to improve their livelihoods with the money generated through the sales, the village had also decided to grow a patch of mangroves for coastal protection which was destined to stay. That was great news, as mangroves are extremely important in not only cleaning water but also as fish refuges and additionally act as a natural storm protection. 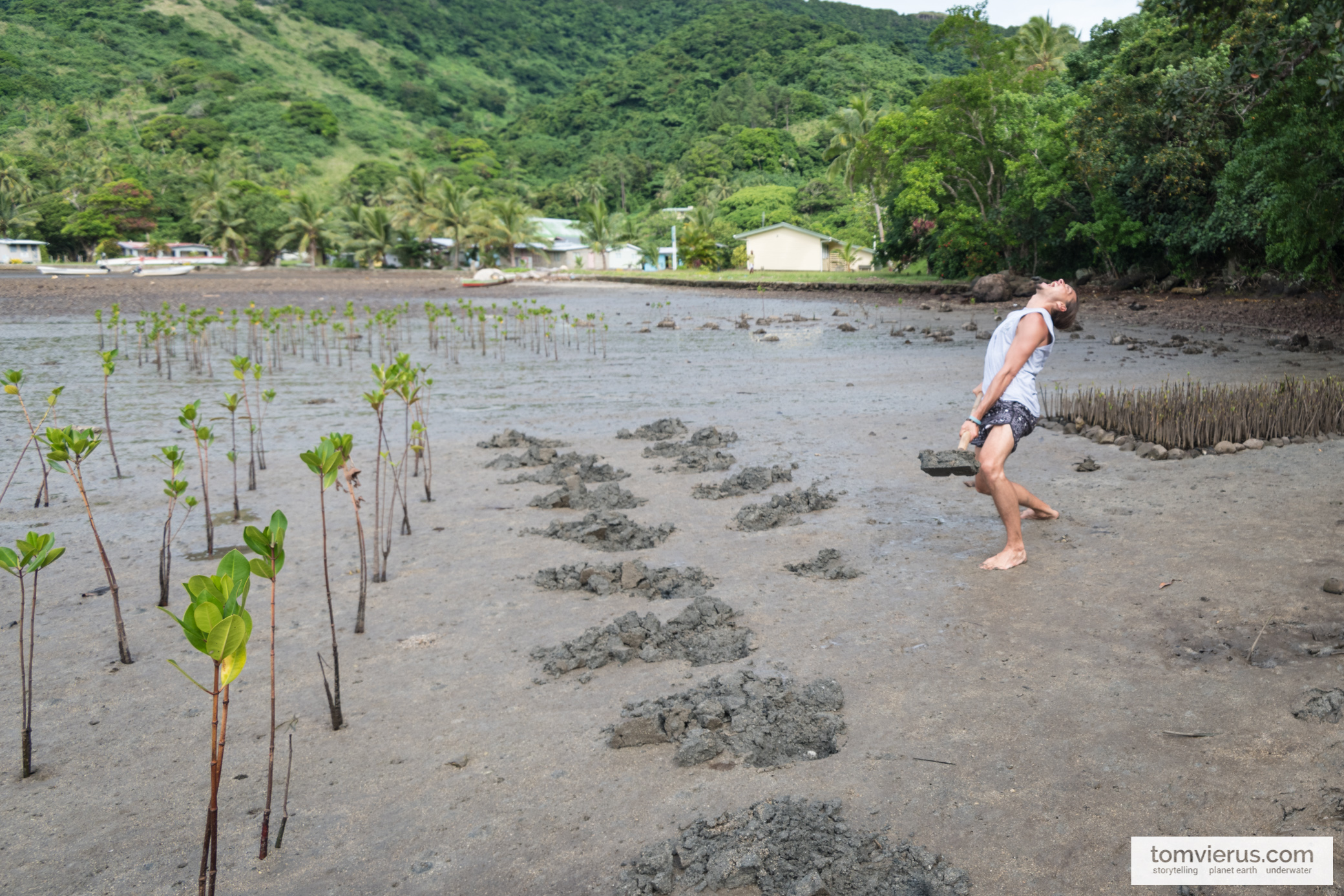 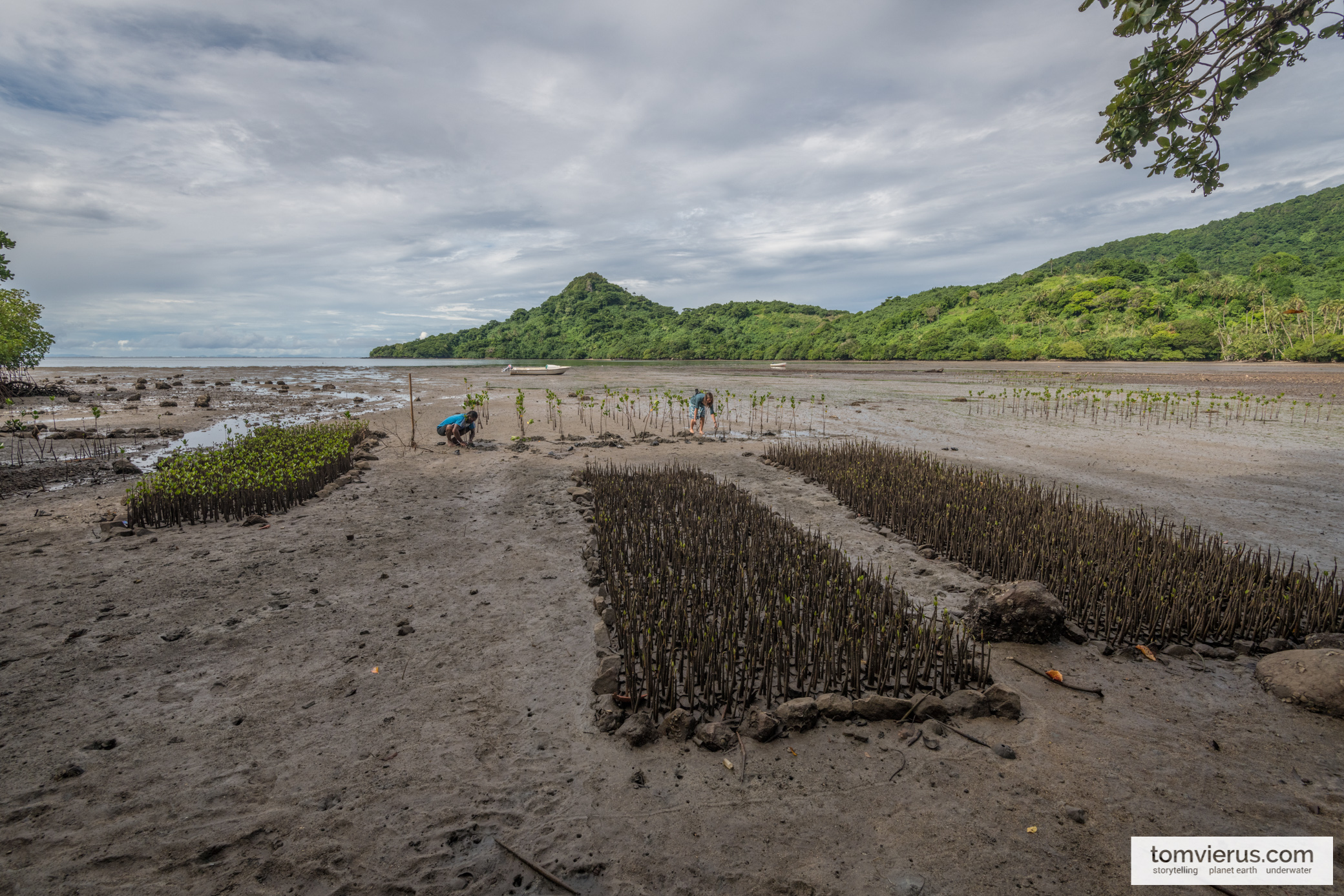 He also showed us recently constructed pig stalls and (as the team recommends on their poster) at least some of them had been built a good distance away from the water, to prevent the pigs’ feces from directly entering the sea water and polluting the inshore reefs.  As we walked back, a heavy rain hit the island of Beqa, but we had to get ready to get back to Suva. While Amanda would by flying back to Australia to meet collaborators, I had to catch a plane to the Solomon Islands to join Akuila and Janne on their feedback trip through several provinces of the country.

The last months have been quite busy – after coming back from French Polynesia, I was working throughout December and January...