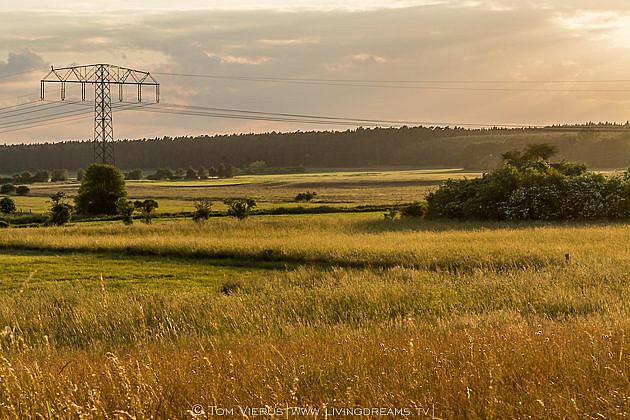 Holidays in northern Germany – Part #2 | Safari with a local – hares, landscapes and deers! 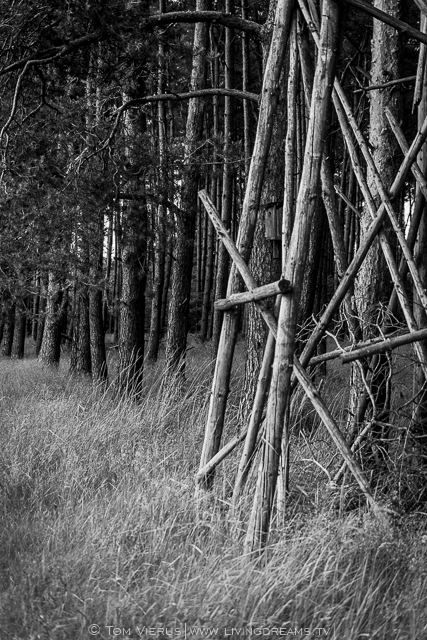 My girlfriend Gülsah, Rox and I were staying in a bungalow in Mecklenburg-Western Pomerania in northern Germany to enjoy a couple of days in nature and find some peace and rest (see Holidays in northern Germany – Part #1 | Beautiful windmill photos in Mecklenburg-Pomerania). During one of our walks with Rox we met this local guy Rainer, who has been living in this area all his life. We got into a conversation and sure, one of my first questions was about the wildlife around here. Did he know any good spots, where they like to hang out on a regular basis? He turned out to be hunting from time to time and to be renting a huge area with around 20 hectares (I think that was the size..). I asked him if we could use his hides and if he could show as some places where chances are higher to encounter deer, hares or wild pigs. He seemed a bit suspicious, trying to figure out if we were “friends” or some other people trying to make a documentary about hunters and put them in a bad light (that´s what he actually thought). Anyways, eventually, we exchanged numbers and met a couple of days after. Gülsah stayed at home with Rox, as we didn´t want to leave him alone in the bungalow. So I packed all my gear together (with my new Manfrotto Fluid Head, the tripod etc. we are talking about 15kg I´d guess..) and met him close to the fields. Rainer had this cool small Lada, a Russian car. Small but as I was going to see a very good choice for this kind of terrain. The Lada climbed every hill, no matter how steep it was and quite a few times I thought “Ok. this time we´re not going to make it, we have to turn around.” But we made it each and every time. 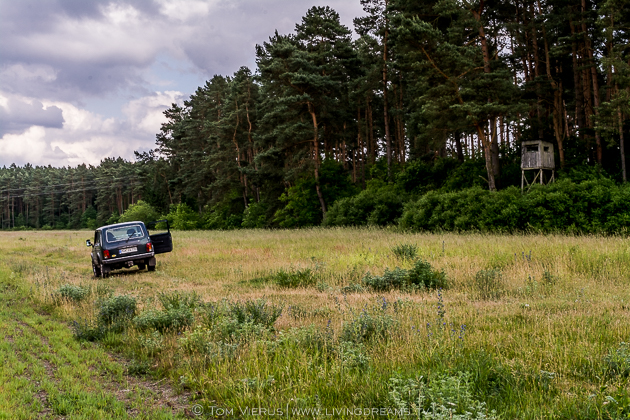 We met around five o´clock – Rainer, myself and his little dog who was joining us. Our “Safari “was going to start. We slowly drove through his land, passing vast fields and dense forests. I could have stopped a million times to take photos, the landscape was awesome. In addition, the light was warm and beautiful, giving the photos that extra touch. At one of his old hides, that he hadn´t been using since he got the land, we stopped.

“Sure thing”, I replied.

“Last week I opened the door and he was almost going to attack me, so I closed it again. Be aware, if he jumps out, watch yourself.. “

Rainer went up the wooden ladder, opened the door… and …. the marten was dead. He had tangled himself up in some kind of an old blanket or whatever that was. Poor thing, it must have died a terrible death, probably dying of thirst or starving.. Even though, it had only been a week or so, the marten stank terribly. Rainer cut him out the blanket and told me, that in a couple of days, there´d be nothing left of his carcass. 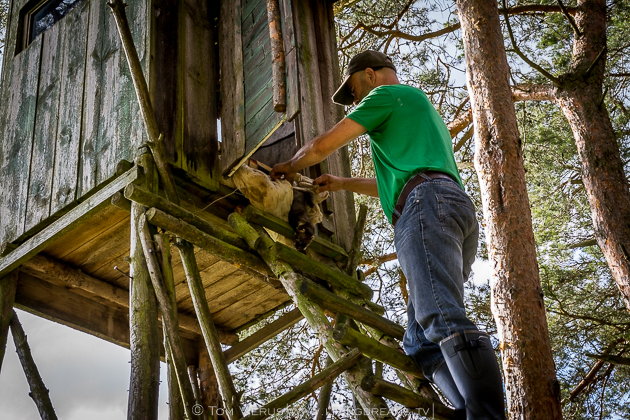 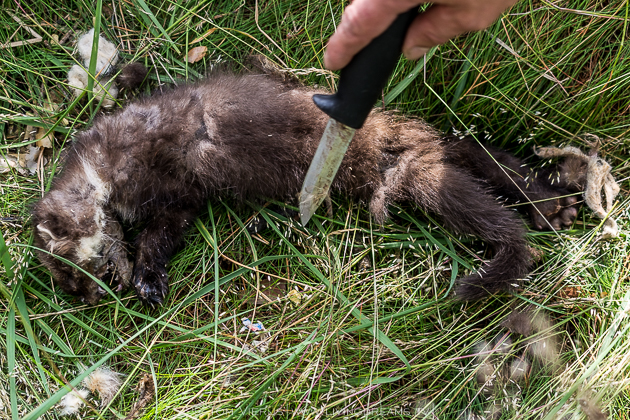 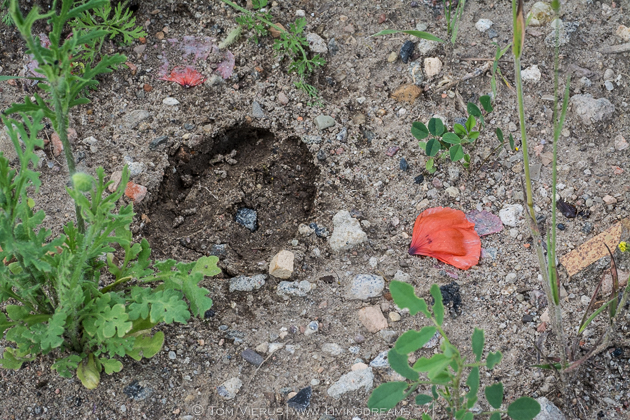 A trace of a red deer. They are larger than the more common fallow deer and way less often to see, though we did get lucky and saw a hind standing in a wheat field.

We continued our safari and got back into the car. Slowly driving through narrow paths, where sometimes the grass was as high as our car itself. Several times we got out the car and walked a few meters to look for traces and other signs for wildlife. We found a lot of them: especially fallow deer and red deer traces (the latter more seldom) and lots of wild pig traces. They are very shy, Rainer told me. Even the clicking sound out of my camera would most probably scare them away. 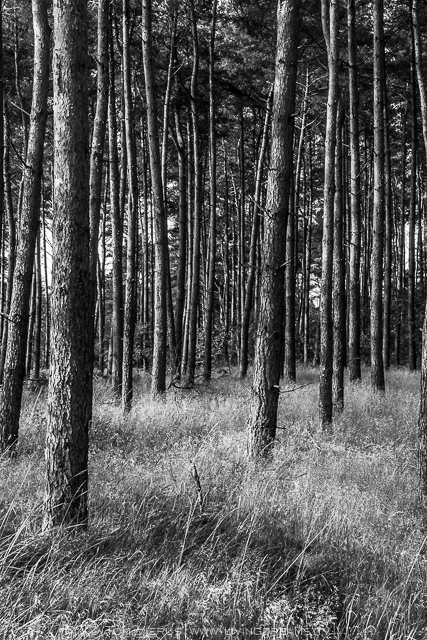 For hundreds of years, forests have played an important role for people. The find shelter here, see gods in them, listen to the spirits, live from its fruits or simply enjoy the bond to nature they feel while being in a forest and breathing clean and pure air. 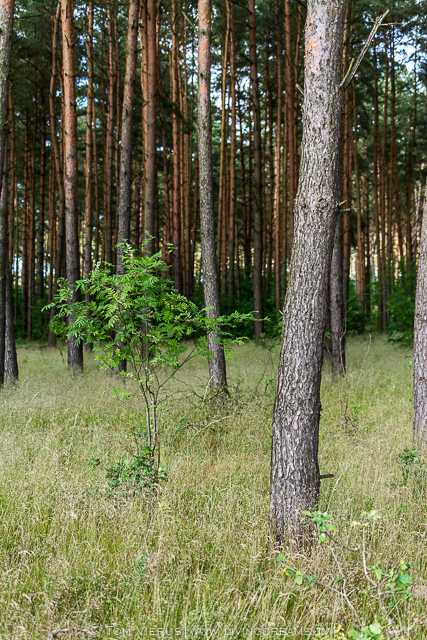 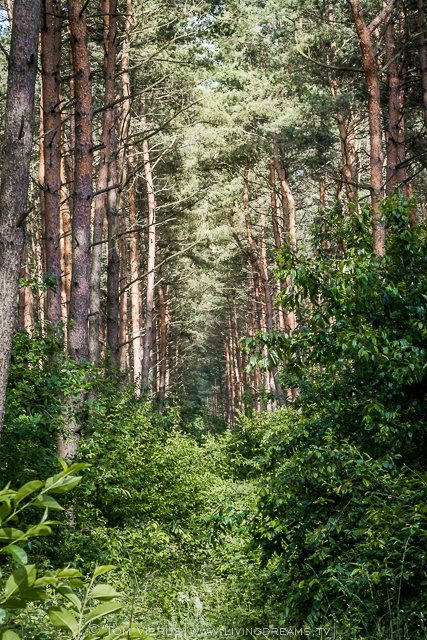 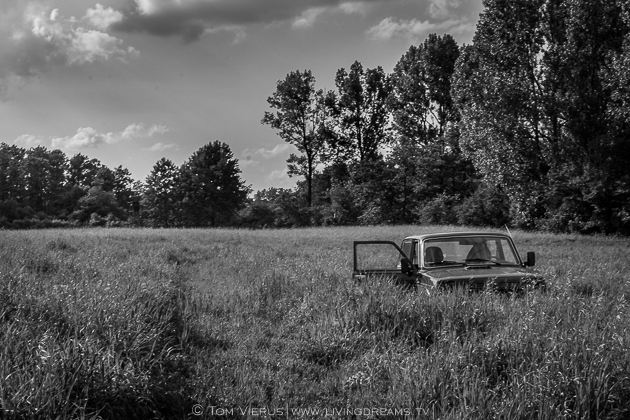 Nothing there – just us and the Lada 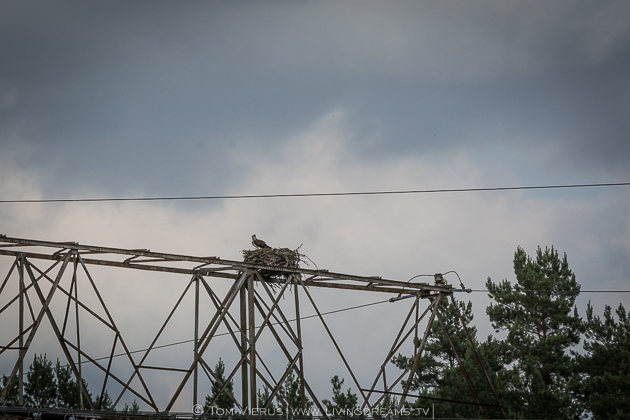 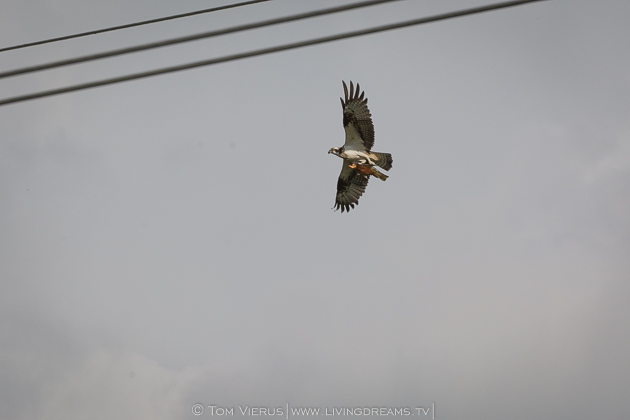 Only a couple of minutes after seeing the nest, we saw the male (female?) flying in with a fat catch. I think the young will be satisfied today! 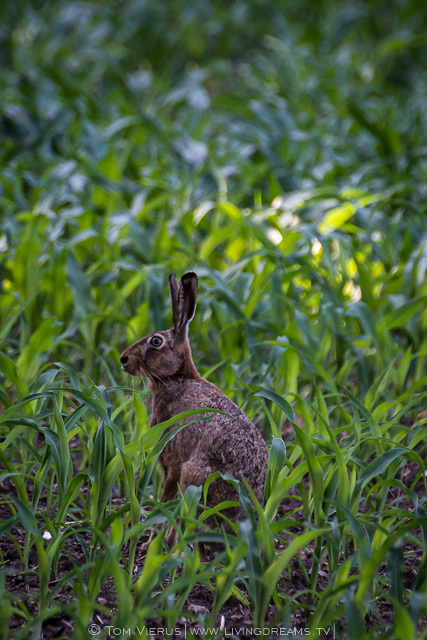 If you´re in the car most of the animals won’t immediately see you as a threat. This hare allowed us to come quite close – my 300mm was enough this time. 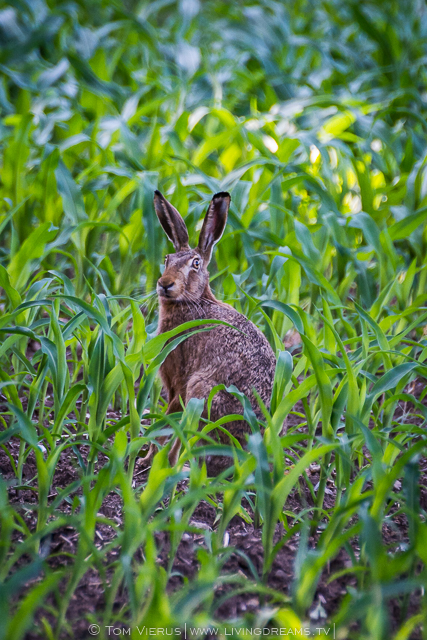 Eventually – after checking us several times – the hare decided we are too boring and made his way back to wherever he wanted to go. AT least he gave a nice “Good Bye” glimpse.

During june, the wheat is quite high grown already and Rainer told me it would better for photographers to come either before or after the summer. This time of the year, the wildlife has a way better chance to hide and find shelter in the fields of wheat and rape. I know for sure, that I´ll be back in September, that´s the mating season! I know what kind of photo I am looking for: a majestic deer standing in the morning mist with a big pair of horns. The thing is my Tamron AF 70-300mm f/ 4-5.6

won´t be enough to get that shot. Don´t get me wrong, I love this lens! I´ve been using it the most of all my lenses. I am a proud owner going into the third year now. Especially considering the price, it is a definite recommendation! Now that I have my Nikon D7100

and a Nikon converter TC-20E III

, which will cost me around 2000 Euros but which is also way sharper. I´m going to look into used ones for sure, I might save a couple of hundreds.  Nevertheless, it´s a hell of a lot of money, which I don´t have (yet). But this lens will last for years and the results I´ve seen with the Nikon 70-200mm

and the Converter speak

for themselves. Go search for it on our big search engine and you´ll see for yourself. 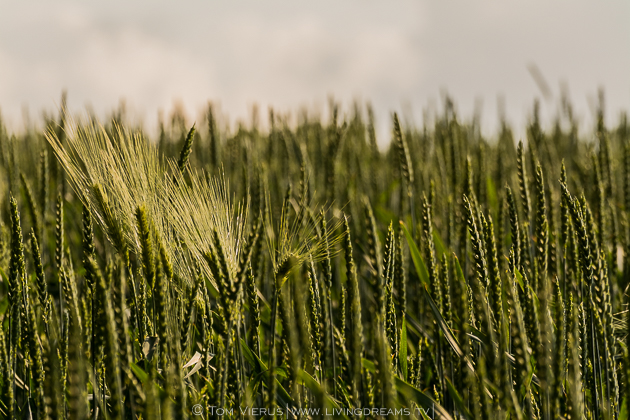 After around two hours we walked into a wheat field and Rainer quickly discovered a red deer hind. She was quite far away, but even from that distance, I recognized the bigger size compared to the common fallow deer you see quite often around here. We ducked down and crawled back into the forest to get closer. Not speaking a single word and walking as gentle as possible we made our way towards her direction just on the edge of forest and field. We took another glimpse on the field and … the hind was gone. It could have just hidden again, it could have run away – we simply didn´t know. Anyways, the adrenalin was pumping and this was so much fun after all! 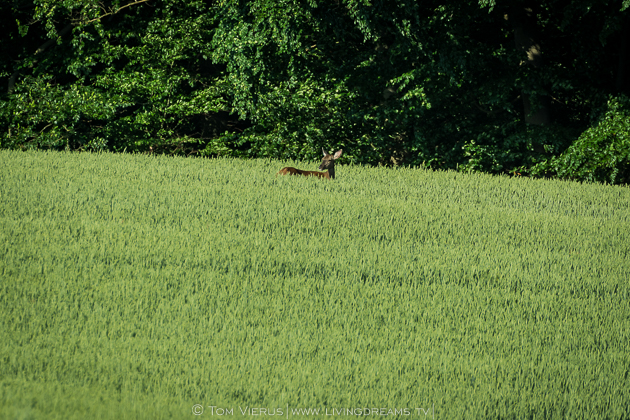 A red deer hind standing in the wheat field. They are way bigger than the “normal” deers. 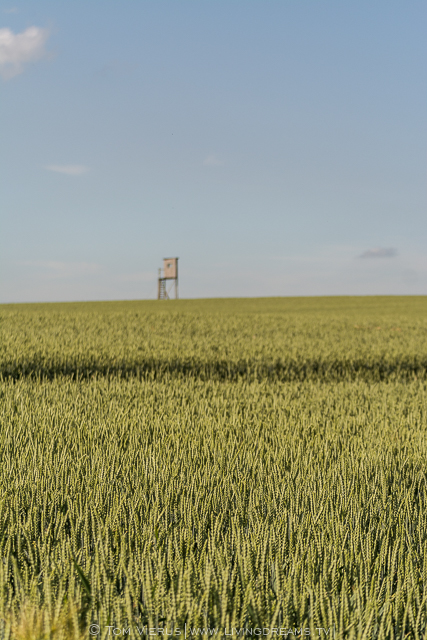 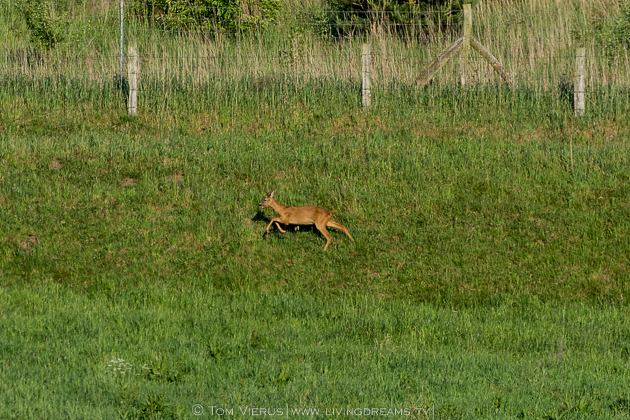 A fallow deer escaping.. We spotted this one in quite a distance, but the approaching car frightened it and didn´t want to pose for us. 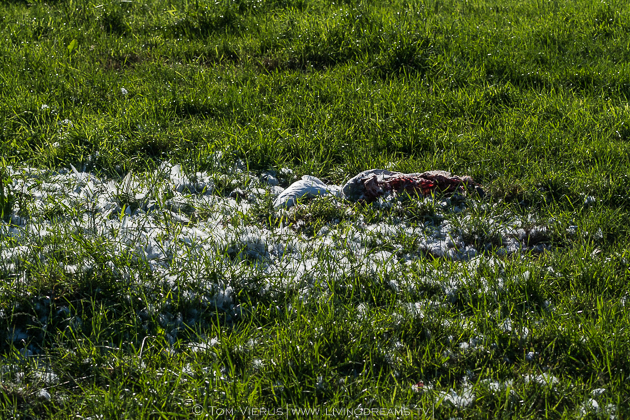 We found this swan on a remote greenfield. As I approached it, a couple of hawks and crows flew away, that had been feeding on the swan. It might have flown into the electricity cables and died of it. It would have been a good opportunity to build up a small hide and wait – but not today.. 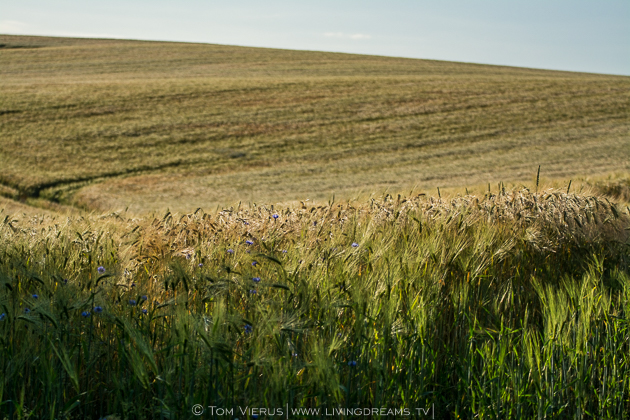 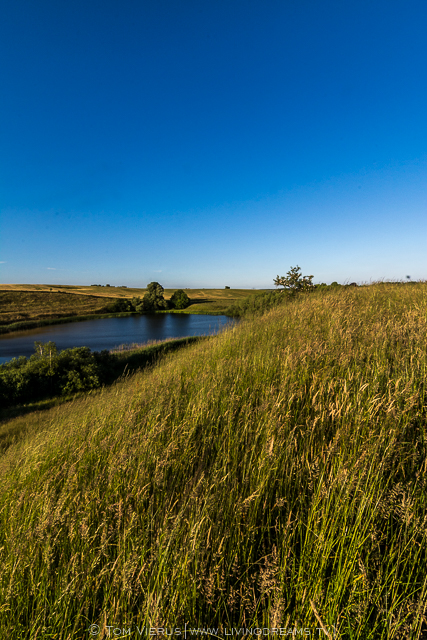 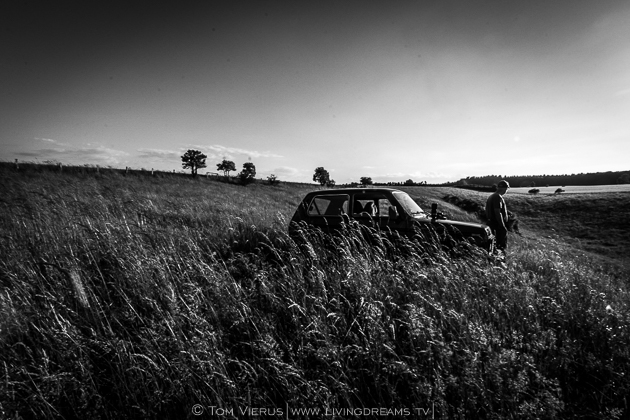 Rainer and his Lada enjoying the tranquility of nature and the freedom you have here.. 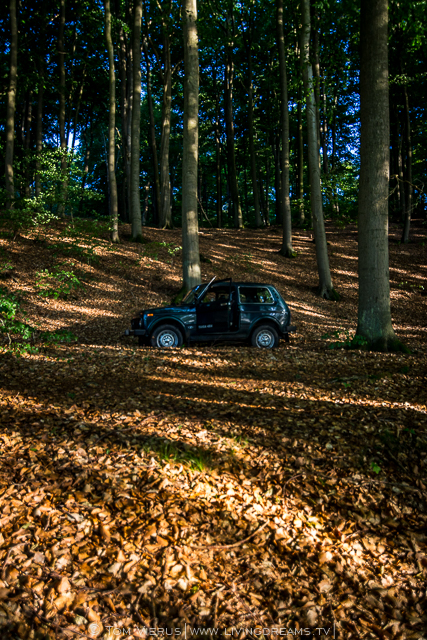 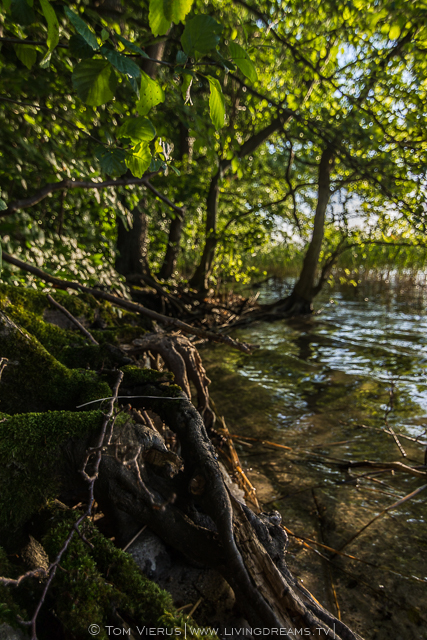 Just before heading back home we again drove through an area where Rainer suggested some deers. They are used to his car – almost every day he´s passing this area with his Lada. The sun was standing quite low by now making the light really warm and friendly. Indeed, we found another deer, that wasn´t too shy. Of course, it wouldn´t come close, but at least it waited a couple of minutes and let me take my shots out of the car before heading off.. 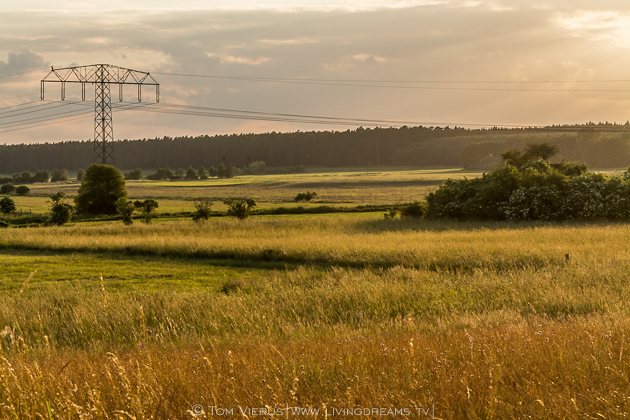 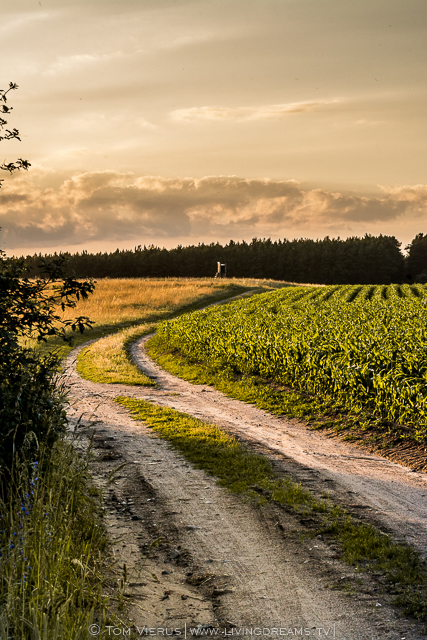 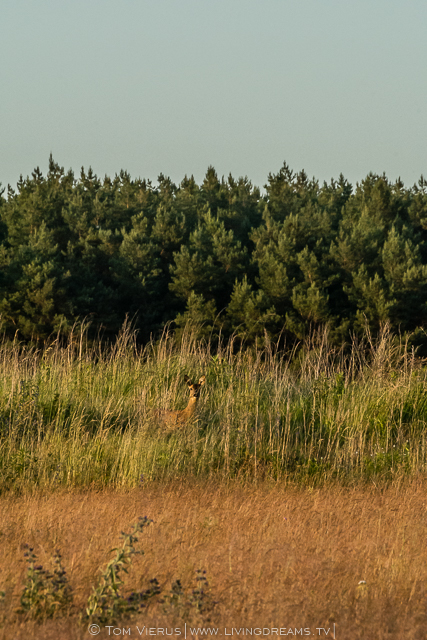 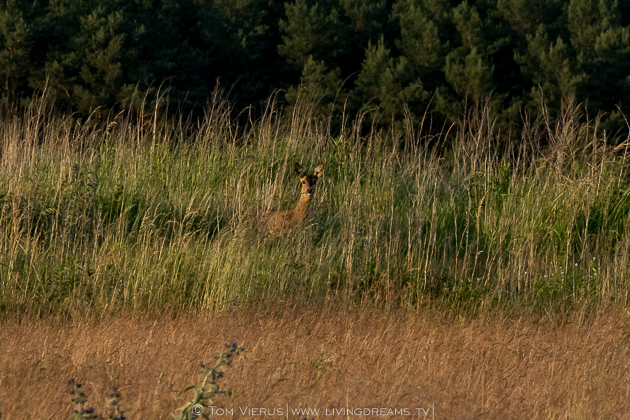 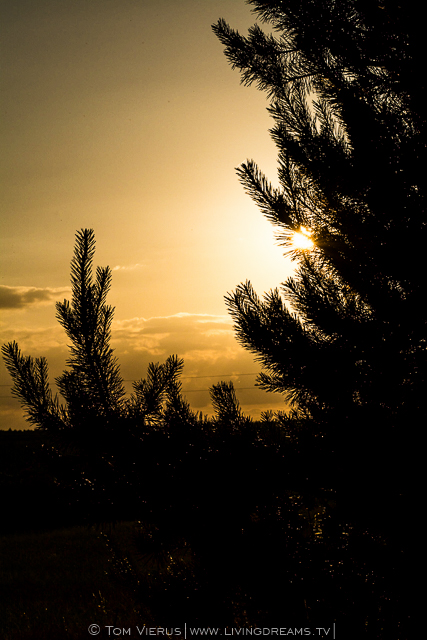 I had some awesome hours with Rainer – that´s exactly what I love in life. I need to find a way to include that in my life and trying to make a living out of it, we´ll see. Thank you, Rainer, for this day and see you in September! 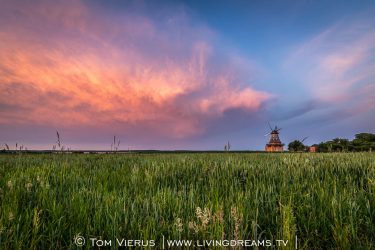 About three weeks ago, Gülsah and I packed all our stuff (especially photography equipment ;)) in our car and made our way to Kassel,...