North Stradbroke Island is with its 275.2 km2 the second biggest sand island the world and just 50 km from Brisbane. In order to explore the island a little, find some wildlife and to finally get into the water again and blow some bubbles, Gülsah and I paid this beautiful place a visit and camped on one of the six camping grounds.

The great thing is that this island is easy accessible with public transport. We took a train to Cleveland, got on the (free!) bus to the ferry terminal and boarded the ferry that takes around 25 minutes to reach Dunwich, one of three little town on Strattie (how it is called here). There is a bus running along the main road passing by the second little town Amety point and finally stops at several stations around Point Lookout, where most people go to. Make sure you let the bus driver know where to get off and maybe plan ahead when to get into the bus in the first place. We were heavily packed with all the camera equipment and backpacks and the bus was cramped to its fullest. The driver would just shout the names of the different stops and if someone wanted to get out, everyone else in front of them had to get out first, clear the way and then get back into the bus. Really a fun drive if you ask me! 🙂 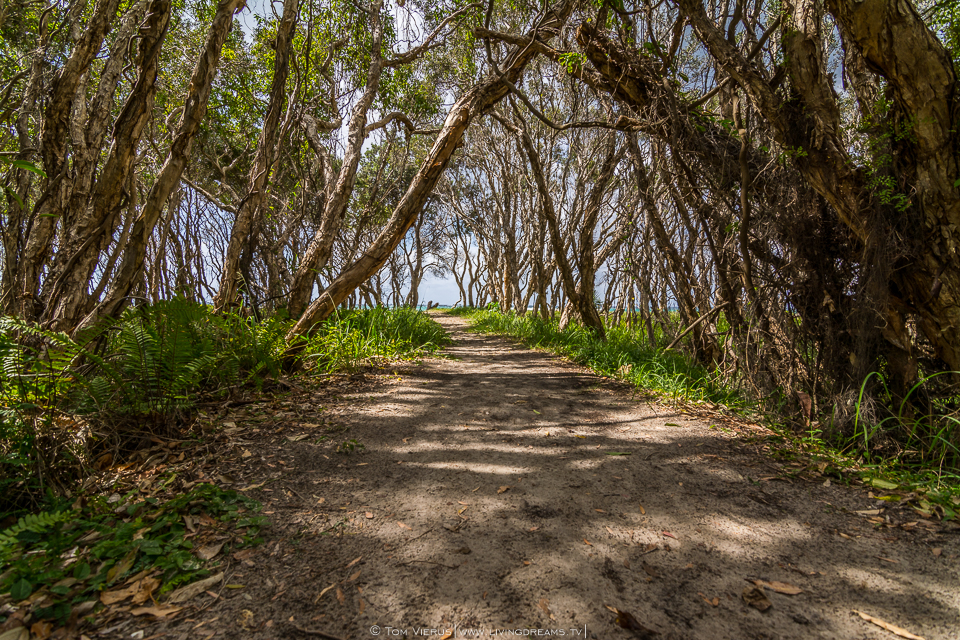 We got off at one of the stops around Point Lookout and realized we weren´t really at the right place, but after a bit of walking we found our home for the night. It was around 12am,  the sun was in its zenith and it was quite hot, but the sea was close – we could smell and hear it! We put up our little cheap tent, that we bought here (if you come to Australia you should definitely consider buying your camping stuff here, since it´s quite cheap and you save the weight for other things to take with you) and were happy to be here and alive. The beach was only 50m away, so tnis camping ground was definitely a good place to hang out! 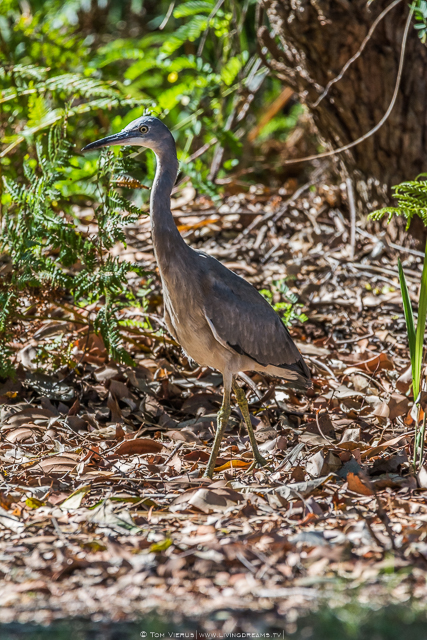 A grey heron foraging at the edge of the bushland 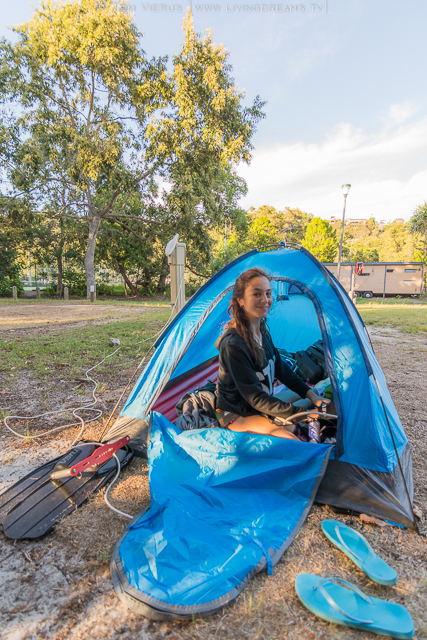 Our home for the night

So we checked out our surroundings and asked a lady that ran a small clothing shop just around the corner for directions to a supermarket. After telling us it´s quite a bit of walking, she offered to drive us there. She closed her store and we got into her car where we got into conversation. When she asked about all that camera stuff we told her how keen we were to find koalas and kangaroos and our little drive to the supermarket was extended to show us some places where we might find them. Incredibly friendly people! So we got a little personal tour by a local – there´s not much better than that if you are new to place and if you are looking for some general orientation and insider knowledge.

Wild kangaroos for the first time – what a blessing

Indeed we were lucky and for the first time in our lives Gülsah and I saw some wild kangaroos!! It was an incredible moment to see these beautiful and totally unusual (to a German) looking animals just doing their everyday stuff – and of the females even had a little one in her pouch! Wow! 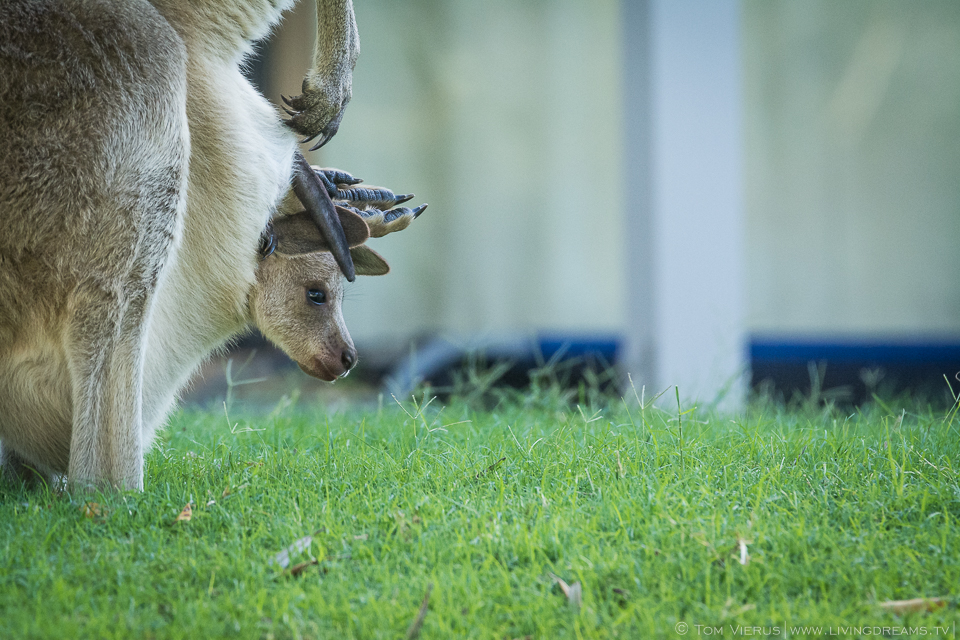 The little guy enjoying the protection of its mother´s pouch

Highly encouraged and armed with a couple of tips we decided to keep looking for koalas and more kangaroos. We walked into a park and followed a trail that led us to a sand road which we followed for quite a while. At some point a 4by4 passed us, stopped and a guy got out and walked towards us. Pointing at our cameras he asked us if we were looking for anything particular and once again gave us a free lesson of how and where to spot koalas and kangaroos and which places to check out. He got back into his car, made a U-turn and drove off – the second very friendly encounter on this day! 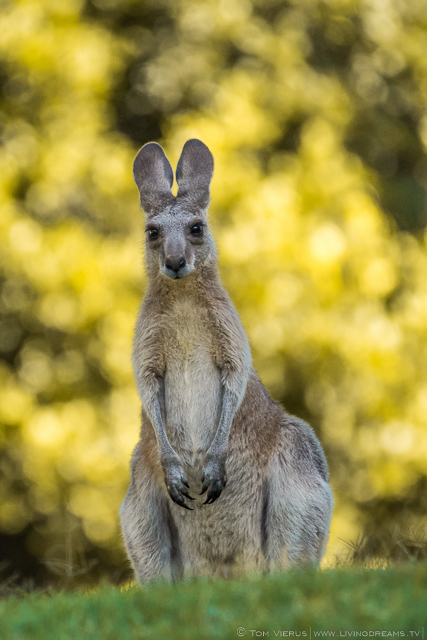 The kangaroos were just as curious as we were .. 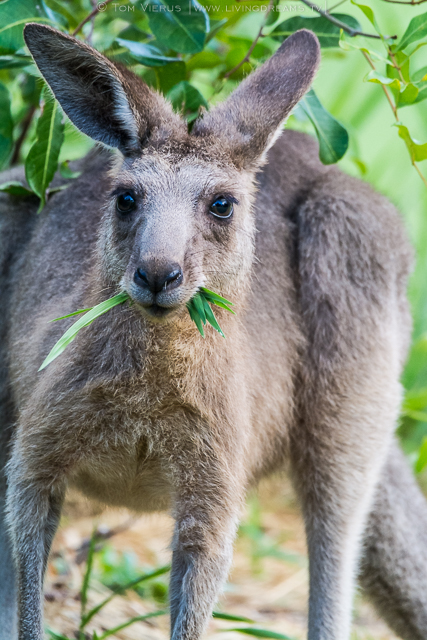 Munching on the greens 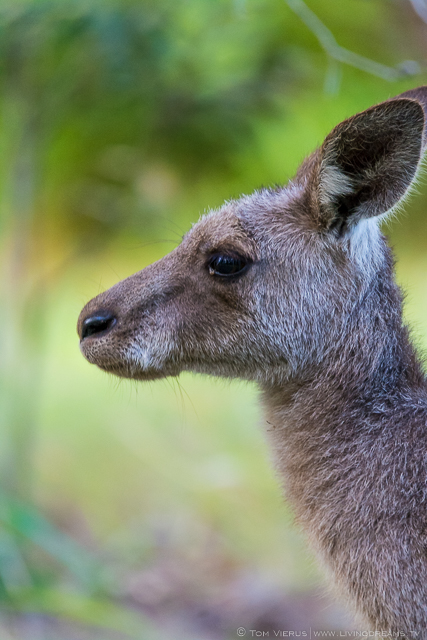 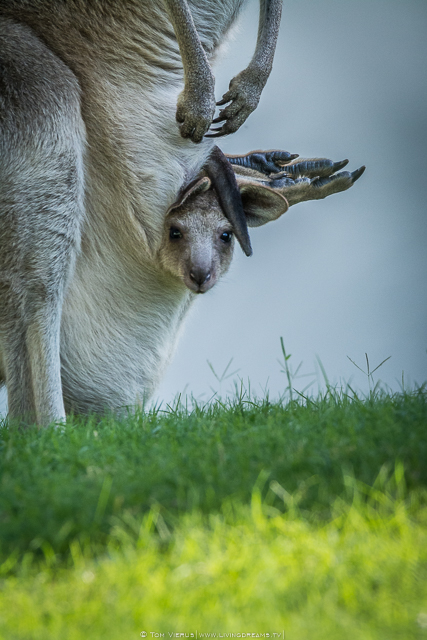 Gülsah spots a sleeping koala in the trees

We had been walking around for quite a while and weren´t lucky in finding any koalas. Nevertheless I was extremely happy to film and photograph the wild kangaroos that we had found on a larger field of grass close to some houses. I was filming them when Gülsah started making that special sound that she always makes when seeing something very very cute. I knew she had found a koala. I walked over to her to see what was going on and indeed a little super cute koala was sitting in a tree fork sleeping peacefully. Yeah! We were lucky again! We watched this little guy for a very long time and then went on very happy and totally thrilled by the two crazy encounters we had today. For us it´s been a wonderful day so far. 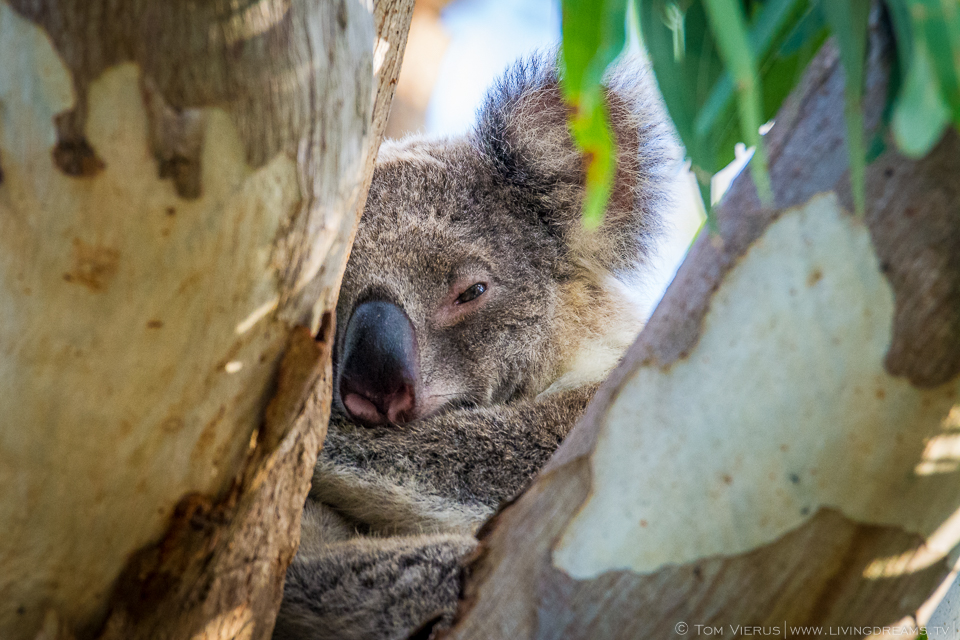 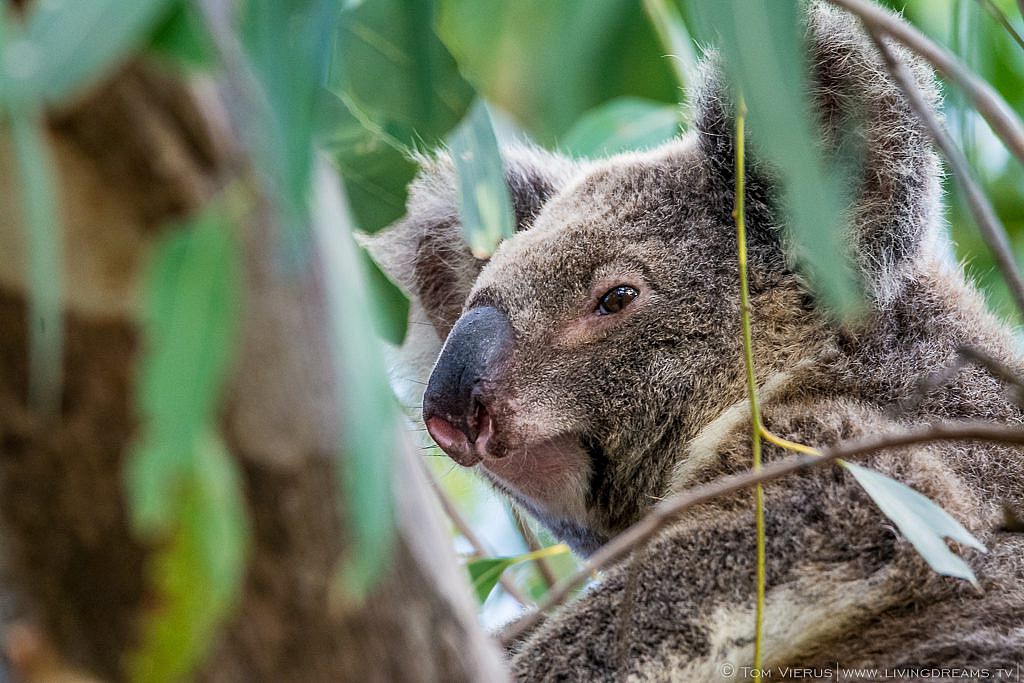 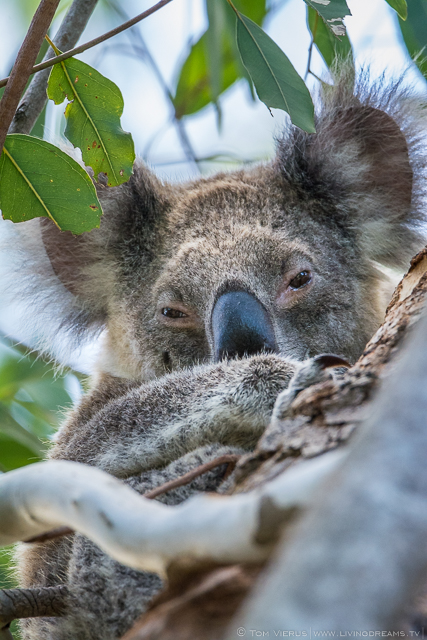 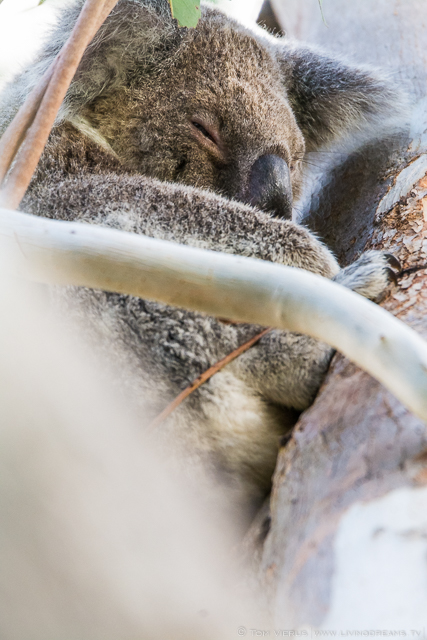 Another koala peing from a tree

Once again we got chatting with a local lady that approached us while we were watching the little koala. She told us that a couple of days ago she had seen another, bigger koala in a tree not too far from here and offered us to take us there. Sure thing, how couldn´t we. And lucky us it was still there indeed! This fellow was very active and was climbing the branches feeding on the leaves. I had just set up my tripod to film a scene, when the koala decided to take a pee. It came down like a little waterfall and luckily enough were a few meters away but the wind still blew some drops over. Standing on Strattie and being peed at by a wild koala – damn I love Australia! 🙂 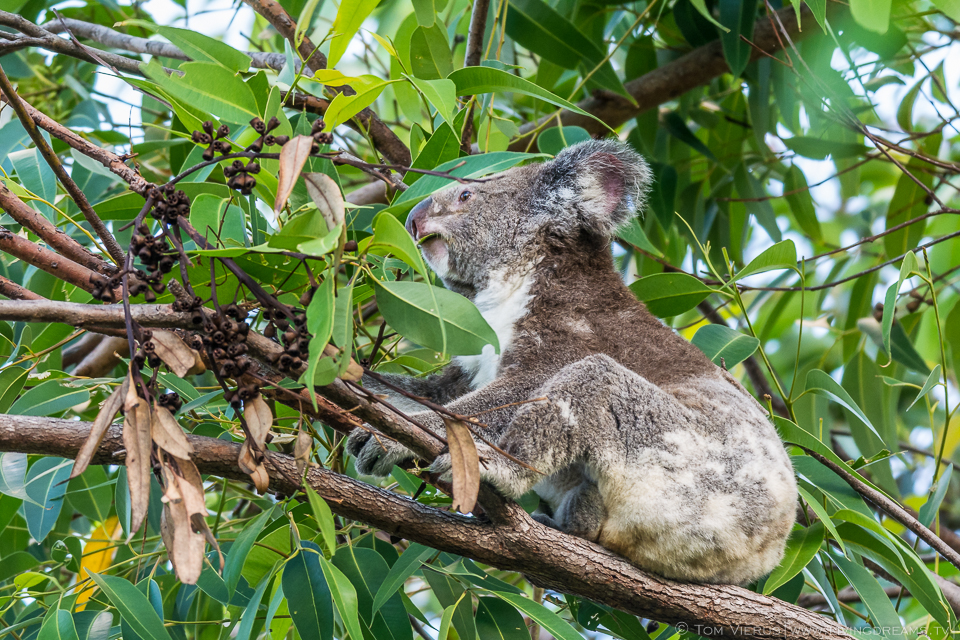 This guy was easily twice the size than our sleeping friend on the other tree and happily munching his leaves.

Stay tuned for the second part and find out what our third ozzy encounter had in store for us..

[…] After a day packed with beautiful and new experiences on North Stradbroke Island both of us were quite tired. We had walked a few kilometers and I had been carrying my tripod with the heavy Manfrotto head plus my camera bag. All in all probably 15 kg but this is something I am very used too. Here in Australia I´ve been taking my camera bag almost every where. If possible I take my tripod with me as well – so in case I want to film i am able to take steady footage. Some people might not recognize that, but there can be huge work behind a little photo or a short scene! […] 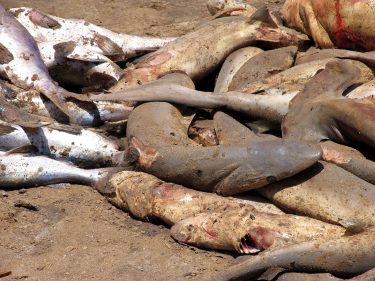 Why we should stop killing sharks and start protecting them!

Sharks have been around for a very long time. They´ve been roaming our oceans for over 400 Million years – an incredible...