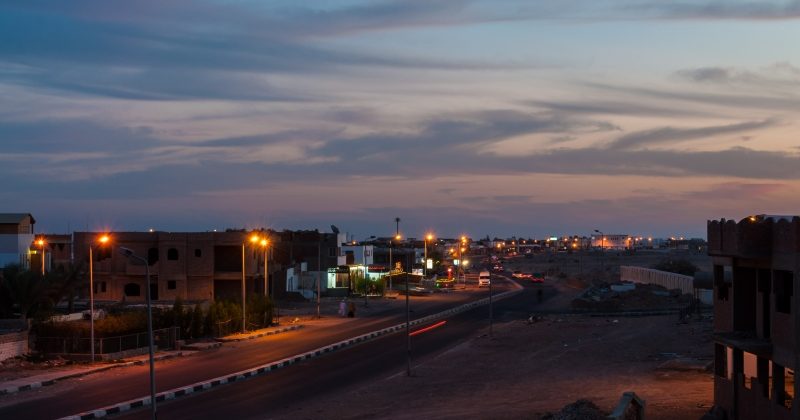 13 things good to know when travelling to Dahab!

We travel, some of us forever, to seek other states, other lives, other souls. (Anais Nin)

My time in Dahab comes to an end, as I am flying home the 20th of January.. It´s been almost six months that I´ve lived here. Some things that I know now, could have been quite useful to me right from the beginning. I´ve put together some tips, that might help you to get started here in Dahab.

Depending on the country youcome from you might find Dahab quite cheap in general. If you stay a longer time here though, you can´t eat out every day (unless you have the money). Anyway, if you want to safe some money you can get yourself a tasty portion of Koshery for 5 pound, 7 pound or 10 pound. So quite cheap, and you loads of carbohydrates. Definitely worth a try (or two)!

I´ve had it many times that I couldn´t get any money out of the ATM´s here as they were empty or simply not functioning. As far as I know, most of them get filled up Mondays, so it´s clever to draw the money early in the week if you know you are going to need it. . Also, the highest amount you can get is 3000 Pound, if you need more, I am quite sure that you can get this amount twice (at least it worked with my card).

Probably most of you know but some might not, that it is almost absolutely necessary to bargain. There are some shops with fixed prices but usually you give your bet, the seller replies (or vice versa) and so on until you settle. Some might even feel offended, if you don´t give it a try. And sometimes it can be real fun!

There´s a load of taxi drivers here in Dahab. Quite often they might try to charge you more than normal and it´s good to keep in mind that a normal way within is Dahab is five pound for one (or two). If there are more than two people in a car, the driver might ask for two pound each. Obviously if you want to be taken a further distance (e.g. from Lighthouse to Hilton Hotel or to the Blue Hole etc) you have to pay more.

If you dive with a certain divecenter you might get discount at the restaurants nearby. It´s always worth aksing. The same with people staying for a longer time in Dahab, you might get discounts at various places to eat. Especially when it´s low season and the aren´t a lot of tourists around anyway.

For those of you not having traveled that much it might be new: In most toilets around her you are not supposed to flush the toilet paper down the drain instead you throw it in a bin, which is provided most of the time. So just to make sure, you are prepared and know what´s going to expect you 😉

Always good for a snack inbetween or to get some european like bread and all other kind of baked stuff. They do have a lot of cakes as well and offer cosy sitting areas (concerning that, I like Leila´s bakery more). Both of them offer good Wifi and I have spent many others sitting here, drinking good coffee, having good sandwiches (!!) and writing on my blog and editing photos.

You can find Leila´s Bakery just opposite the Koshery place at Peace Road. To see some of their offers check out their facebook group https://www.facebook.com/groups/159989804075051/ !

German Bakery facebook group: https://www.facebook.com/ralphsgermanbakery )has two stores in Dahab: one at Lighthouse just beneath the Planet Gym and the other one at Asalah square. Actually at the moment I almost pass this one every day when Rox and I take a run to the beach. I usually get two cheese sticks there (I really love them) and as soon as we are sitting at the beach we share them :-). 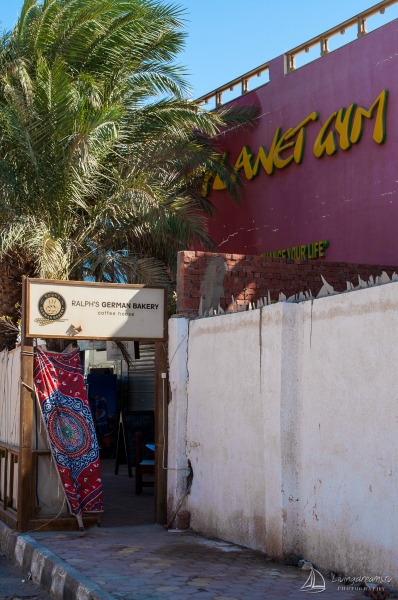 This is the German Bakery at Lighthouse. Right above it you´ll find the Plant gym!

A really good place to keep in shape and get some exercise as well as have a great hot shower is the Planet Gym! The two guys working there are awesome and the machines and weights allow a lot of good exercises, even if some of them have probably seen better days ;-). As my shower is not the best at home I always shower there after training and it´r really become my routine. For 120 LE a months you have access every second day – go for it! It´s not only beneficial for your health you can also have a nice hot shower as long as you want during the colder winter days 🙂

With around 80 Million Moslems in Egypt, almost 95% % of the population consider friday as the most important day during the week. People are roaming to the mosques and you can usually expect lots of businesses during midday closed. However, there are still lots of places to go to even on fridays. Just don´t be surprised why fridays are so quiet..

For those of you who don´t want to miss the important games (or maybe some of the unimportant either) YALLA BAR is a good address to go to as well as RED SEA RELAX. Usually the play all kind of games (La Liga, Premier League, Bundesliga .. ) depending on what people want to watch and which teams are playing (the ones, where egyptians play always have an advantage 😉 )

And (at least) in YALLA BAR it is always worth asking for the game you want to watch – at least I could watch the one or other Madrid game that way!

I don´t exactly know you´ll find the post office in Dahab, but what I know is, that you can get (absolutely old) postcards and stamps at the shop next to the bridge in Masbat Bay. They also have a green letterbox right in front of it! Sending postcards is cheap and easy, so why not make some people back home smile?

It is very useful to know a couple of words in arabic as you might meet a few people who are not able to speak the language you are speaking. So here are the basics:

Hi / Hello  (May peace be with you) – as salaamu alaikum

Answer to that (and so with you) – wa alaikumu èl salaamu

All the words written in arabic are the way I would write them, I am pretty sure it´s not the correct way to do it. Just try it out and let locals correct you 😉

Getting or drinking Alcohol is no problem in Dahab. There are at least three Liquor stores I know of (just next to Jowhara hotel in Mashraba, one at the small square in Mashraba, and one at Asalah square). Most restaurants at the promenade also offer Alcohol. Some do not but are totally fine with you bringing your own. You can estimate an average Euro for 750ml in the store and about 50 cents on top for the same in a restaurant. Heineken is a bit more expensive than the locals Sakara and Stella.

Please respect the locals and don´t walk around with beer in your hands, topless and drunk. That´s not cool.

I hope this lists helps you guys if you plan on coming to this beautiful place. A really good page to check is http://www.dahab.net/ – not the prettiest one, but you´ll find lots of information there. If anyone already living or staying in Dahab has some tips to add please feel free to comment below or ask any questions you like! I´d appreciate any kind of feedback!

Have a good one !

A week ago Gülsah and I joined a trip of Best Offer Safari to the White Canyon. It´s about an hours drive from Dahab in the direction...