Boat trip, dolphins and the Blue Hole.. but sad news as well..

Past monday we went out by boat to El Shugurat, Gabr el Bint & Shaab Said about an hours boat drive from Dahab. The sun was shining at its best and the sea was calm and flat like a table of glass. Not only us RSEC people, but also some others joined to do some fun diving in this remote area, which is only accessible by boat. Thanks to Nina’s help, we were able to complete our survey at 10m dephts in one single dive and could join the others on two more fun dives. The diving was awesome. Compared to most of the spots we´ve been to, this one was in an excellent condition. A huge variety of corals and much more and larger fish. As this area ist that remote (I don’t know whether there are some locals fishing there or not), the flora and fauna beneath the surface is left alone and prospers. 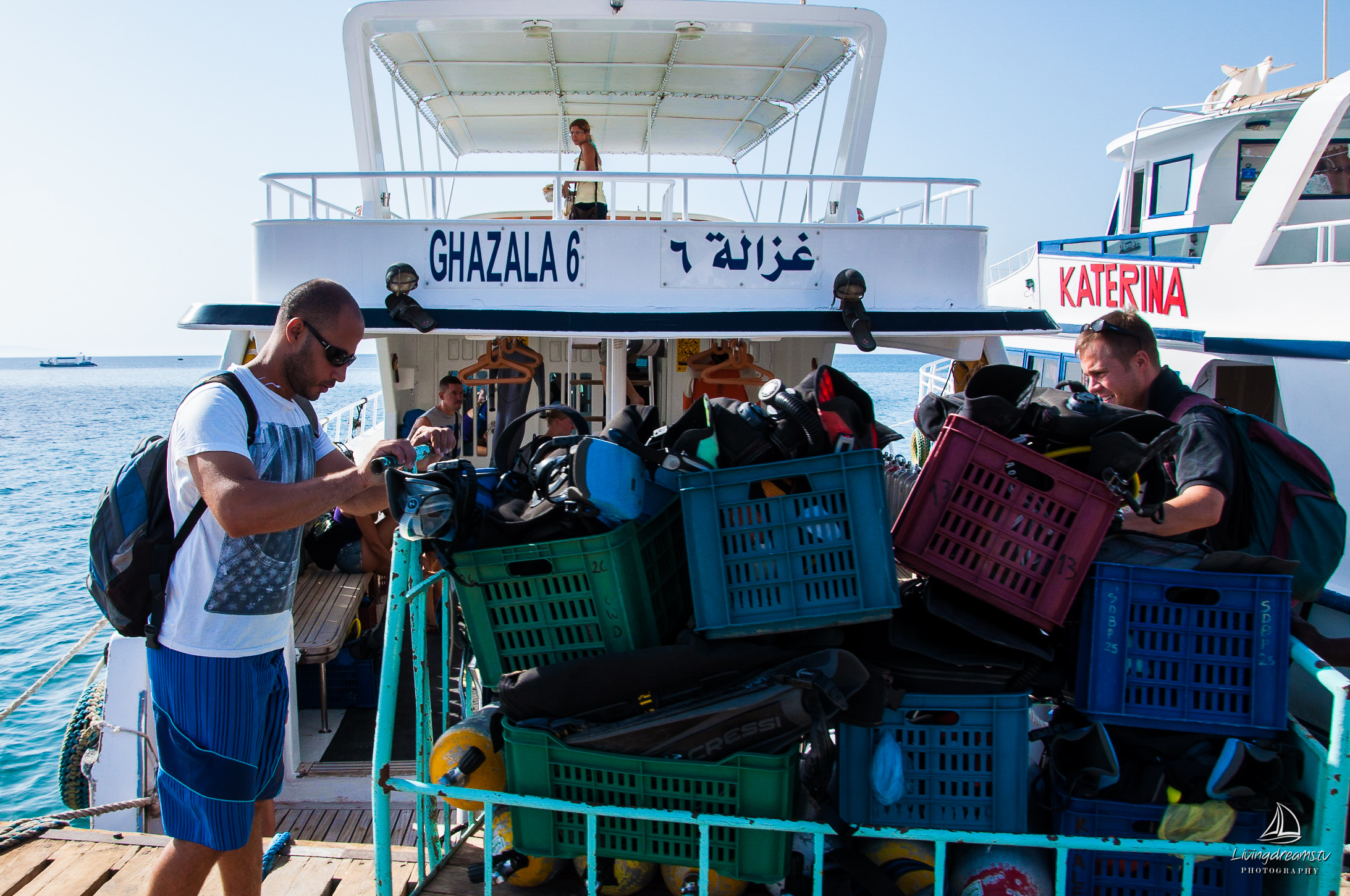 Getting all the dive equipment of the GHAZALA 6, our boat for today.

We were blessed with two turtles, schools of butterflyfish, a couple of big black snappers, a bluespotted stingray and a giant moray (the biggest I’ve ever seen!). Our last dive was a drift dive, meaning we jumped off the boat “drifted” along the reef edge and got again picked up by the boat. To me, especially this last dive was an extraordinary one: the light setting was simply fantastic and combined with the reflections of fish and corals on the surface made me fade away a couple of times. I completely let go and just felt calm & happy. At some point Nina banged her tank, pointing in a direction and we all speeded up a bit. There it was: an impressive hawksbill turtle was resting on the corals and looking at us. As we got closer, it gently took off and “flew” away.. 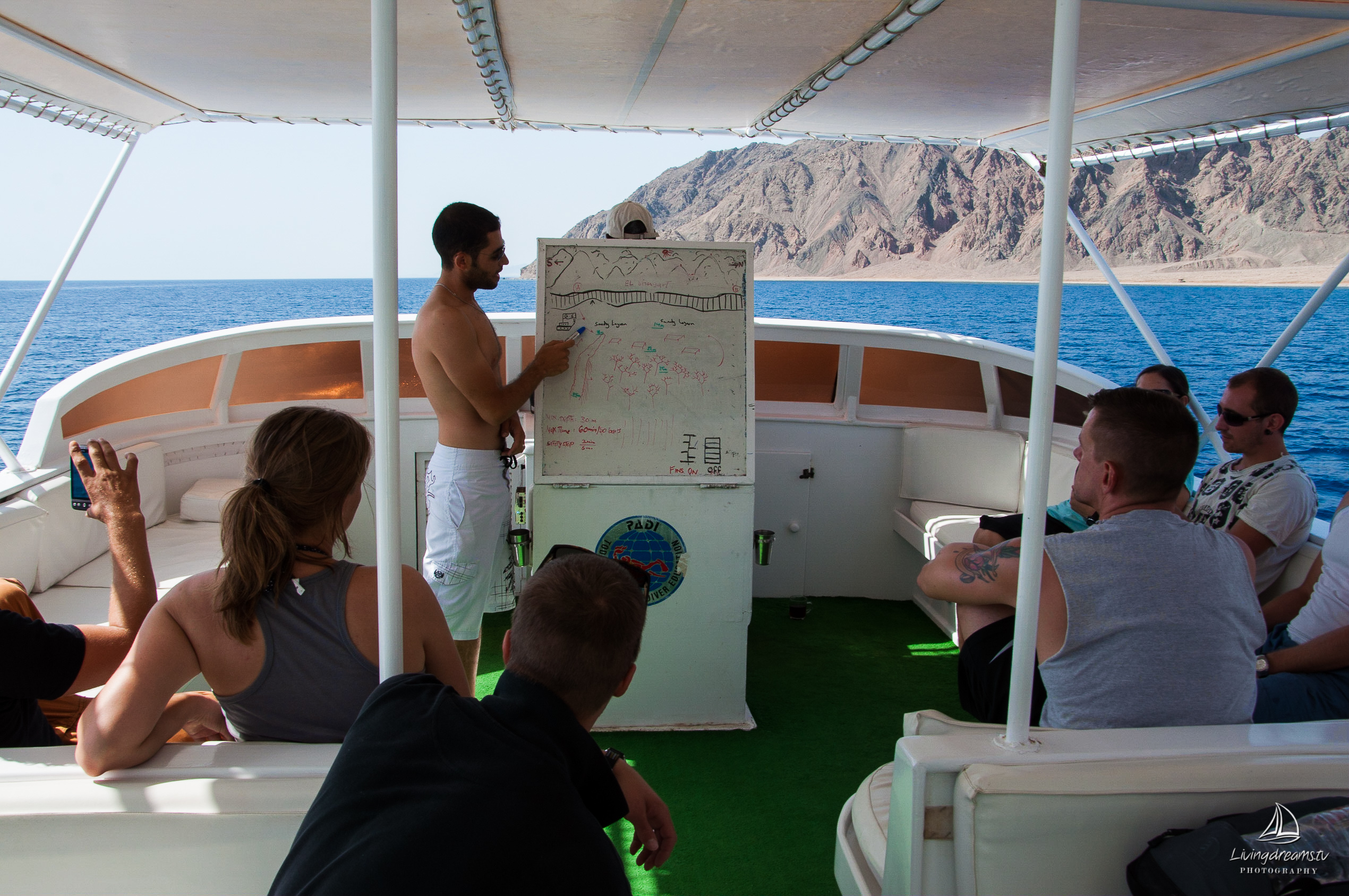 Rami (one of our guides) explaing the dive site El Shagrat 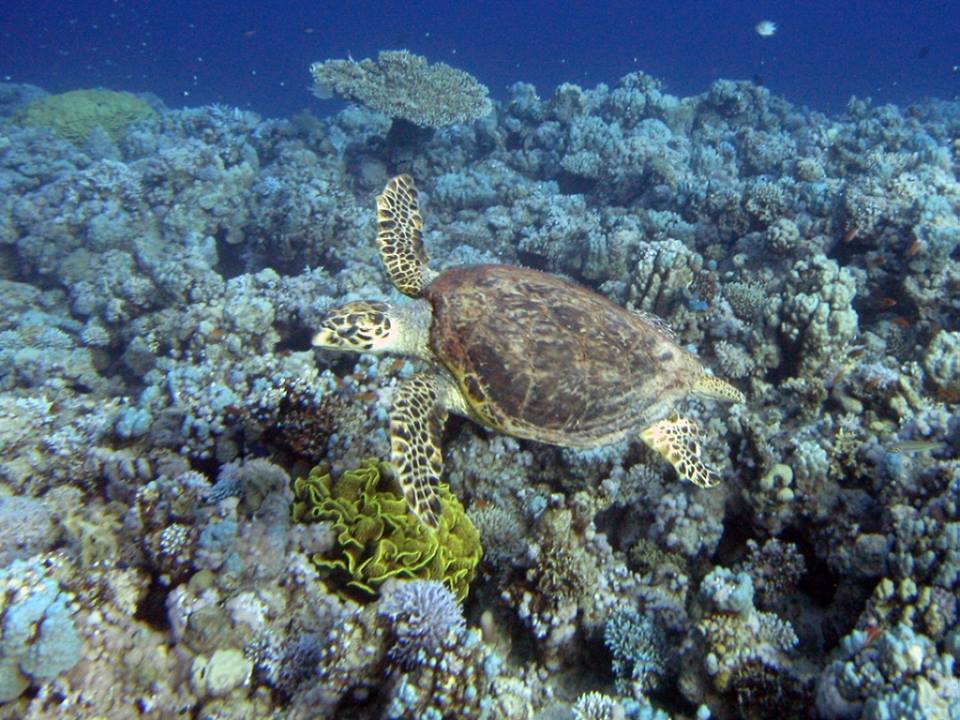 The hawksbill turtle “taking off”. photo by Nina Milton 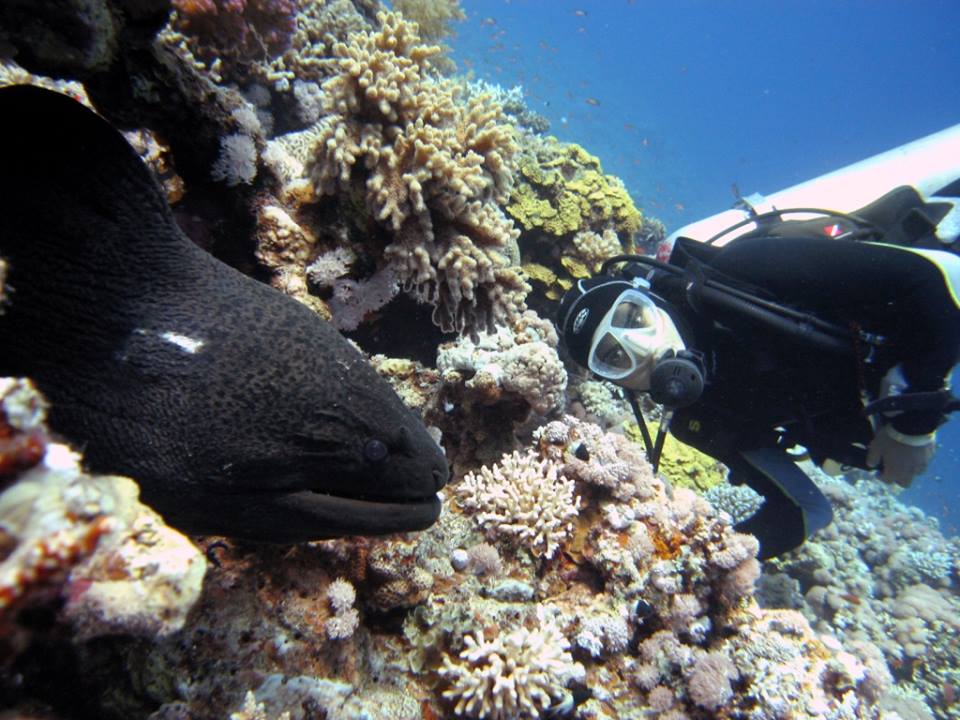 Mustafa and the (giant) giant moray. photo by Nina Milton

After this beautiful day on the boat nobody thought we would even have more luck: on our way back the captain suddenly pointed somewhere to the horizon. “Dolphins, dolphins!”, he said laughing, probably knowing what’s gonna happen next.  Everyone ran to the boats bow looking out for them. First we saw one, then two and finally five dolphins  were swimming along our boat, including one little baby dolphin! What a sight! They were showing off and we were whistling at them, trying to encourage those beautiful creatures to stay close to us as long as possible.  They put a smile on everybodys face, including the captain. After a couple of unforgetable minutes they just vanished and left some really happy people behind 🙂 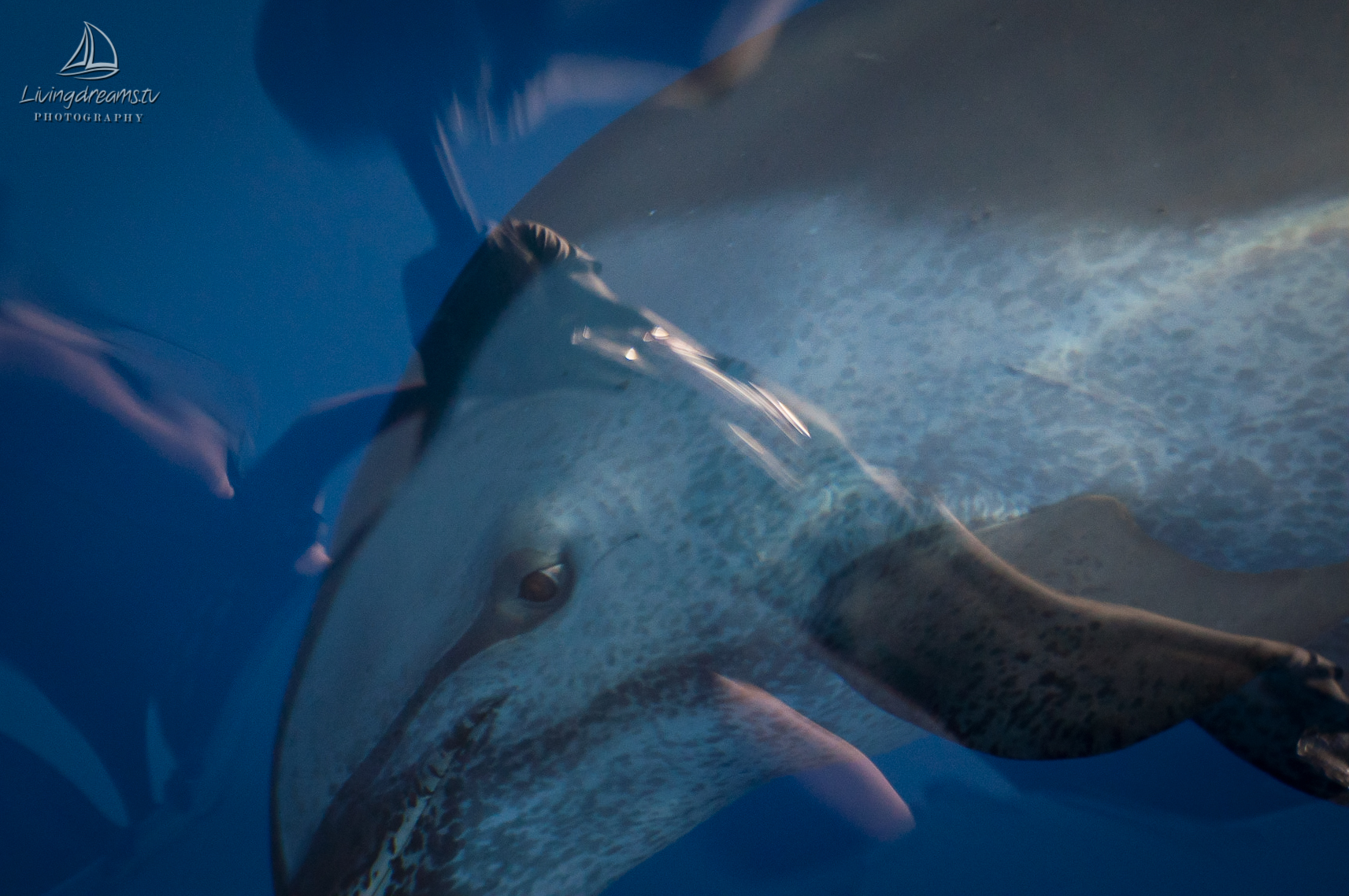 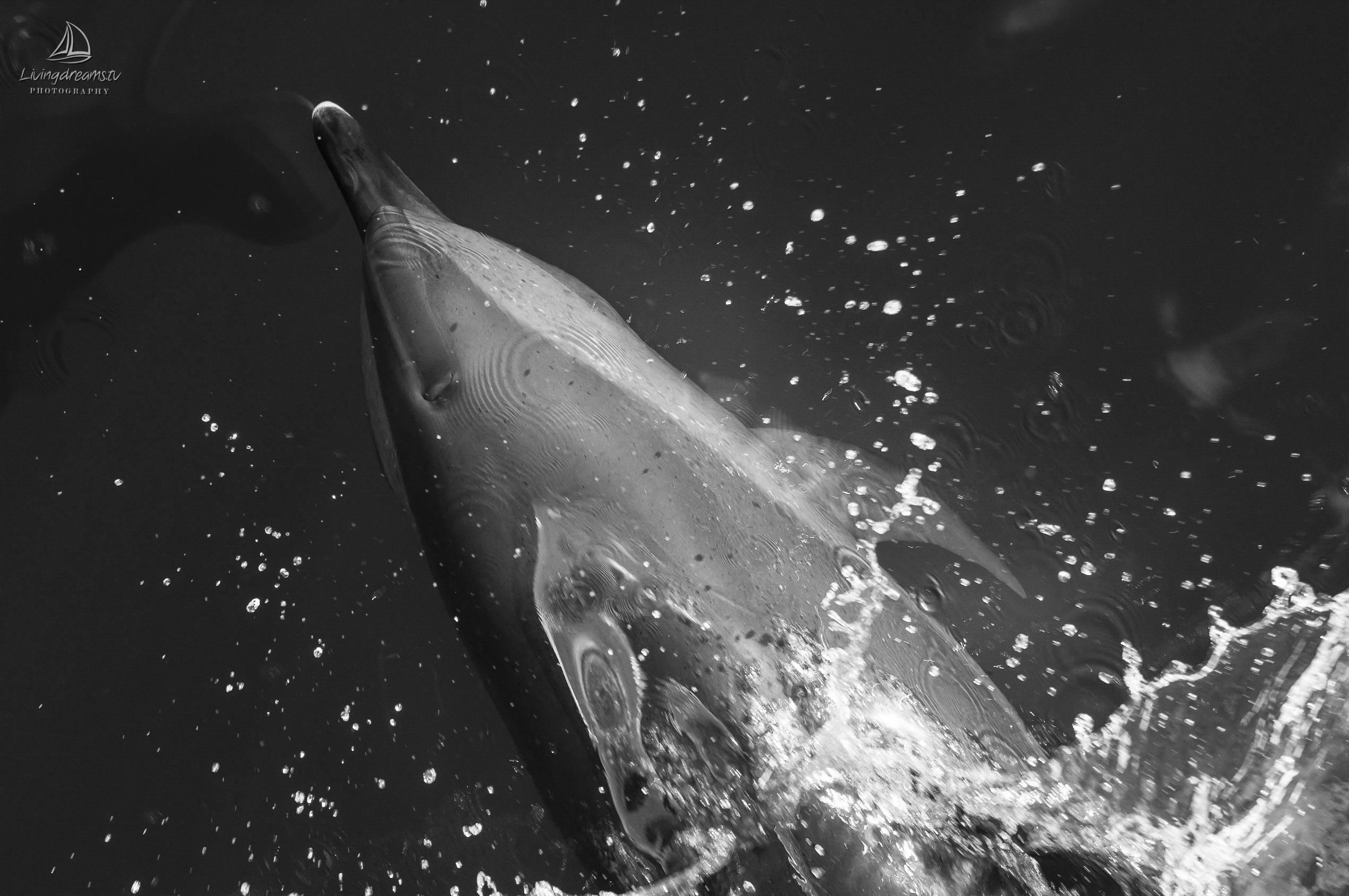 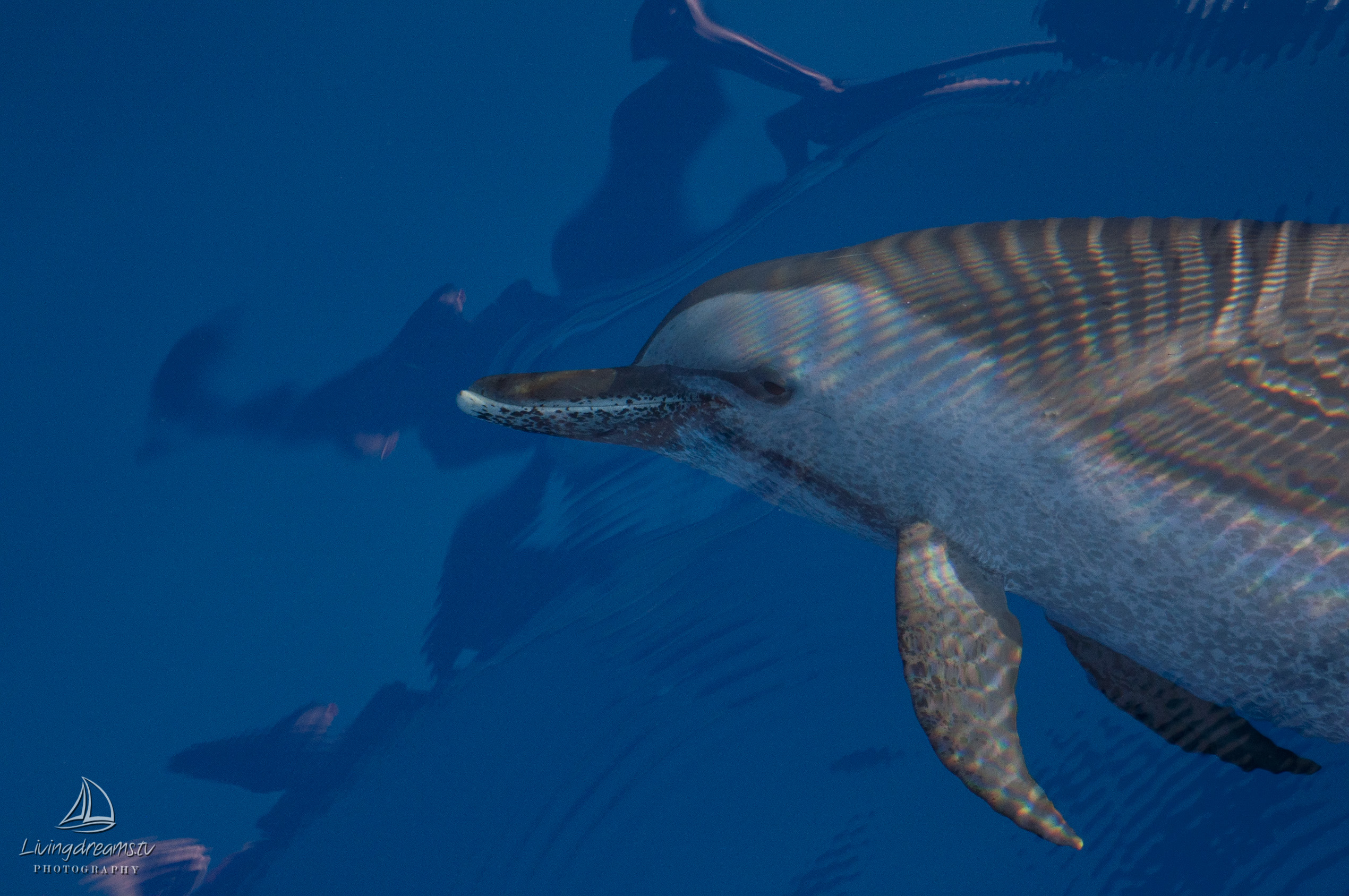 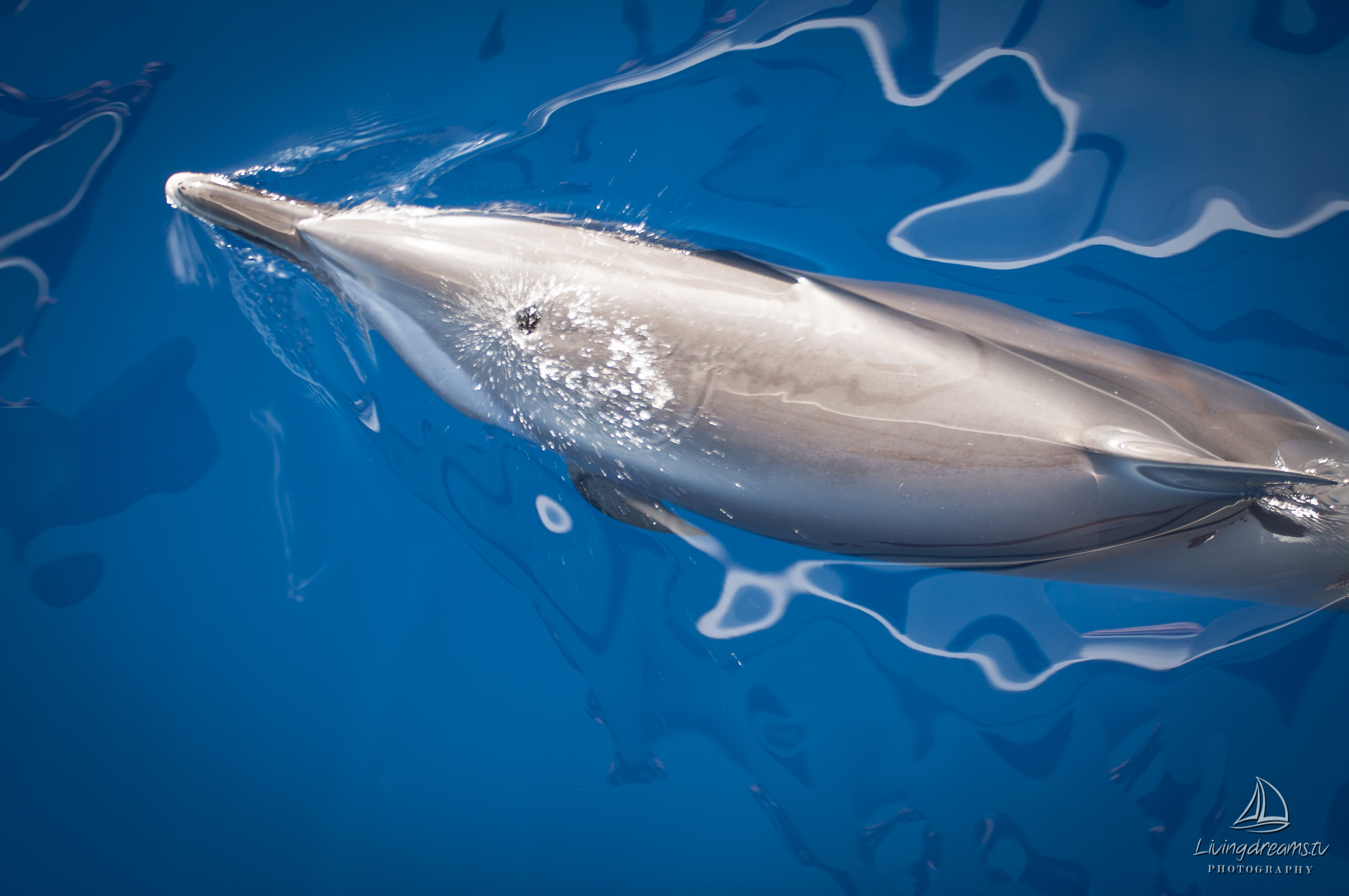 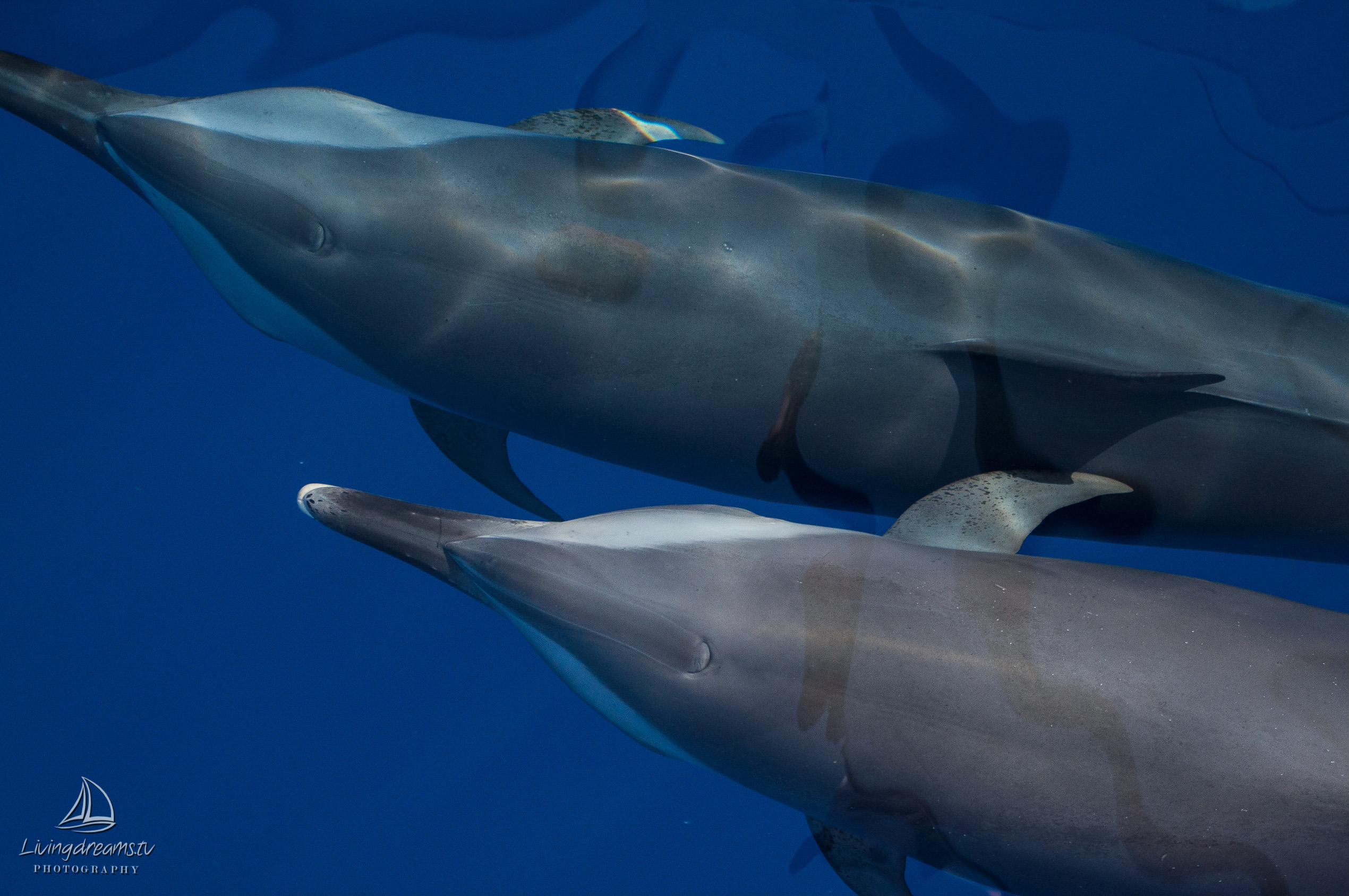 Tuesday morning us RSEC volunteers and Nina met to do a clean-up dive just here in front of our diveschool in Bannerfish bay. The idea is simple: everyone carries a big net and collects as much rubbish as possible. It´s incredible how much trash we actually just collected on this one dive. If one imagines how big the world is, it´s just depressing to continue this thought regarding the trash in our oceans..The highlight of this dive was an encounter with a Napoleon – he came to check us out, circled us and vanished – Wow, what a fish! I had never seen one before, and as it came close I have to admit I had a feeling between being totally astonished and being scared. Luckily it didn´t swallow me though 😀 As we came out the water after 57min, I felt very good within: we had collected lots of plastic stuff which otherwise would have  floated in our oceans for hundreds of years and would have most probably caused deaths among our sea animals.

After some resting (and a shisha of course ..) we finally went for a night dive here at Lighthouse at around six (at that time it´s already dark here). In the shallow sandy area right where we got in, we saw a couple of juveniles (right now it’s baby fish season :-)): A tiny octopus, maybe 7 cm in diameter, a crocodile fish only about 15 cm long and a little trunk fish maybe 4cm long to just mention a few. So cute!! Unfortunately it was quite crowded and once again we saw some “good” examples of wreckless diving: people were just bouncing up and down without any control of their buoyancy or whatsoever and bumping into corals all the time. That´s one the many ways, how reefs are being destroyed .. 🙁 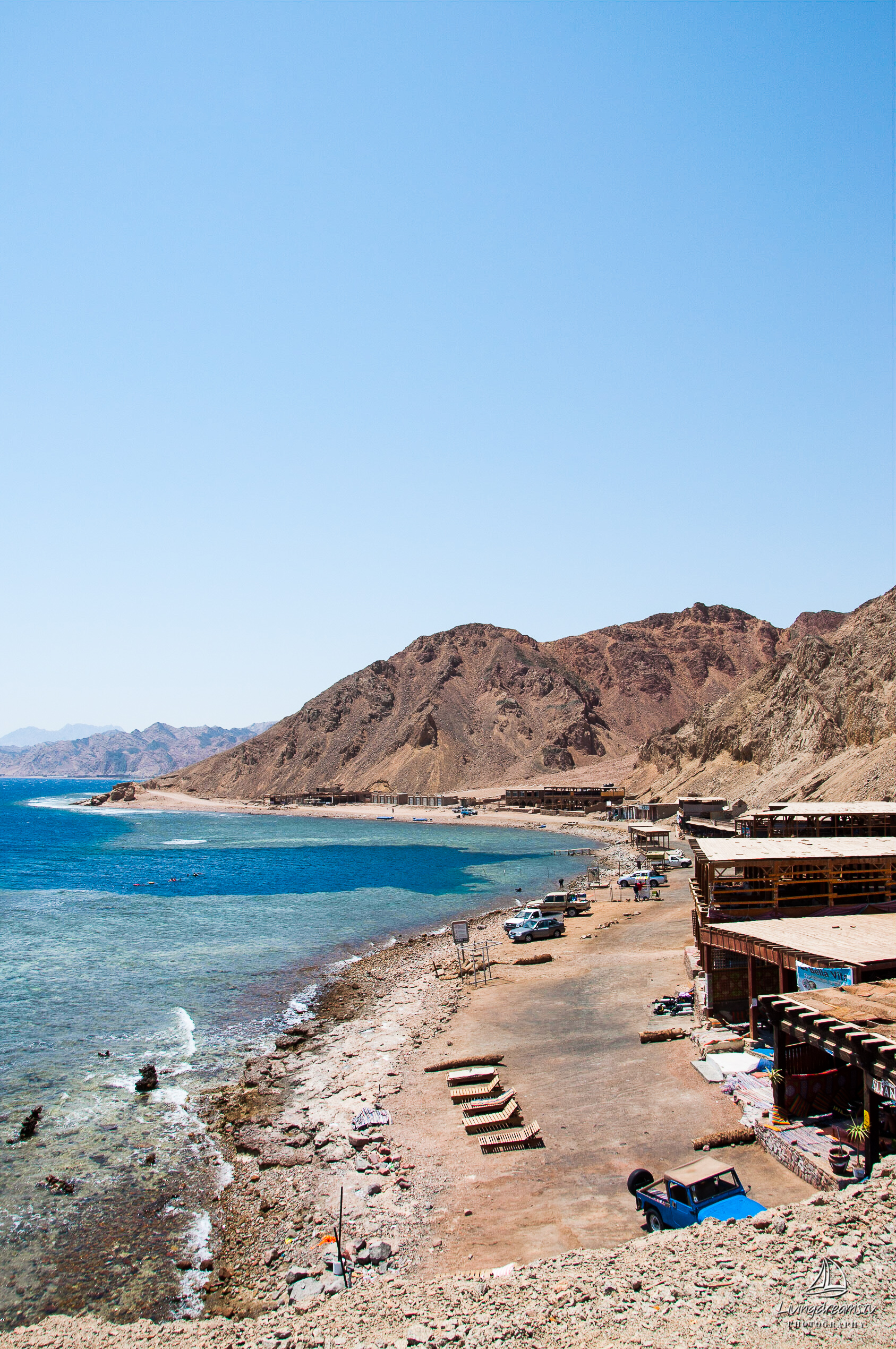 One can clearly see the Blue Hole in the middle, surrounded by the reefs and place of many tragedies and hero stories..

After a free day on wednesday we drove up north to the Blue Hole, where we actually wanted to do two survey dives. As one of the volunteers hadn’t shown up, we decided to do only one survey dive and a fun dive at Bells Blue Hole instead (yipee ;-)). And funny enough, this dive happened to be my 50est – it couldn´t be better.. I simply love this dive site. Gülsah and me had done it twice with Frank already. Going down to 30 metres, through kind of of a tunnel which is open on one side and then through the arch head-down is just an awesome feeling. Once this is “done” one swimms along the reef edge on the right hand side, slowly ascending during the dive. If you take a look to your left, there´s just this endless blue.. magical!!!

The Blue Hole is sometimes referred to as one or even the most dangerous dive site in the world. The Hole itself is around 130m deep (difficult to find exact numbers..). In around 50m-56m there´s a tunnel connecting the Blue Hole with the open sea, called “the arch”. Without proper equipment it’s easy to die in an attempt of trying to swim through this tunnel, which is around 26m long. Divers can either miss the tunnel, misinterpret ist length or underestimate the influence of nitrogen in this depth (nitrogen narcosis), which can have similar effects on the consciousness like extreme alpinists encounter in extreme heights. There have been many deaths among divers trying to either descend on the bottom or trying to swim through the arch. There are several memorial tablets pinned to the mountain.. It’s a strange feeling passing those. Again it´s difficult to find exact numbers of deaths over the past years but it must have been a couple dozens at least. 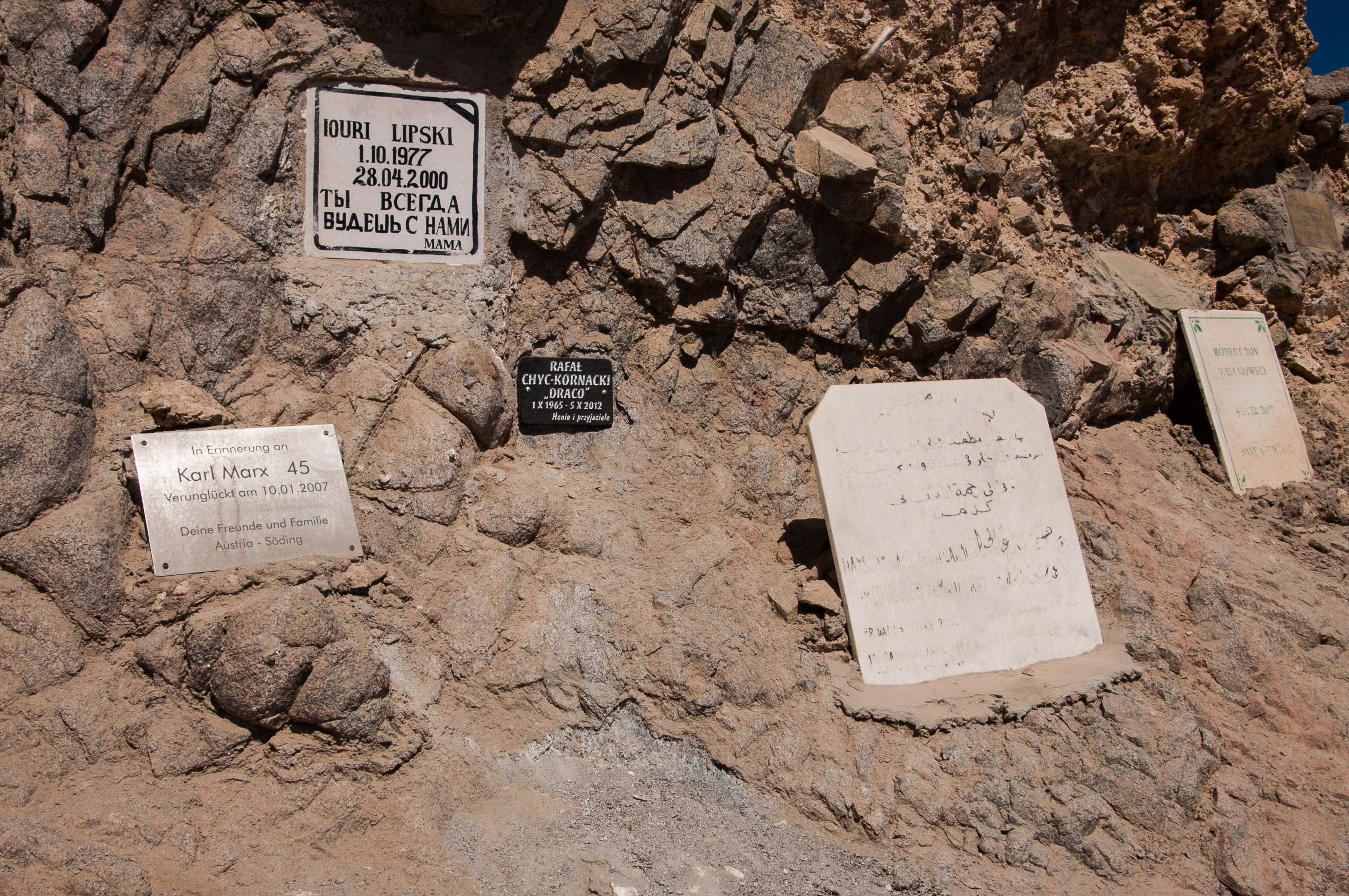 Some of the memorial plates.. makes you think..

In the afternoon we then completed the 10m dephts survey and then went to collect plastic trash on land. This place is incredibly dirty. In about 15 minutes we filled two huge plastic bags with all kind of trash. Especially bottle lids, plastic bottles and stuff like forks, old fins etc .. As the Blue Hole is very famous at snorkelers and divers and therefore quite a busy place, lots of people just leave their shit. Very sad actually but I am happy that we did something against it in this hopeless seeming battle! Bottom line: we CAN make a difference, just start at some point!

Today same place, same things. This time all of us showed up and we did two survey dives at 15m. On our second dive we got lucky and a Napoleon appeared. This time it didn´t come as close, but anyways – it was still great. It stayed a moment and then disappeared in the blue..  Again we went to collect rubbish after our second dive and filled in no time two more bags. I hope, by watching us, some people reconsider their behaviour regarding trash disposal and might think twice next time they throw a plastic bag or bottle away.. No matter where you are, please remember this and use as little plastic stuff as possible, eventually lots of it will end up floating around in our oceans..

And now the saddest thing at last.. Malaika is gone.. 🙁 🙁 🙁 She hasn´t shown up for three days now. And right in front of our house there´s this big pack of dogs.. I miss her.. 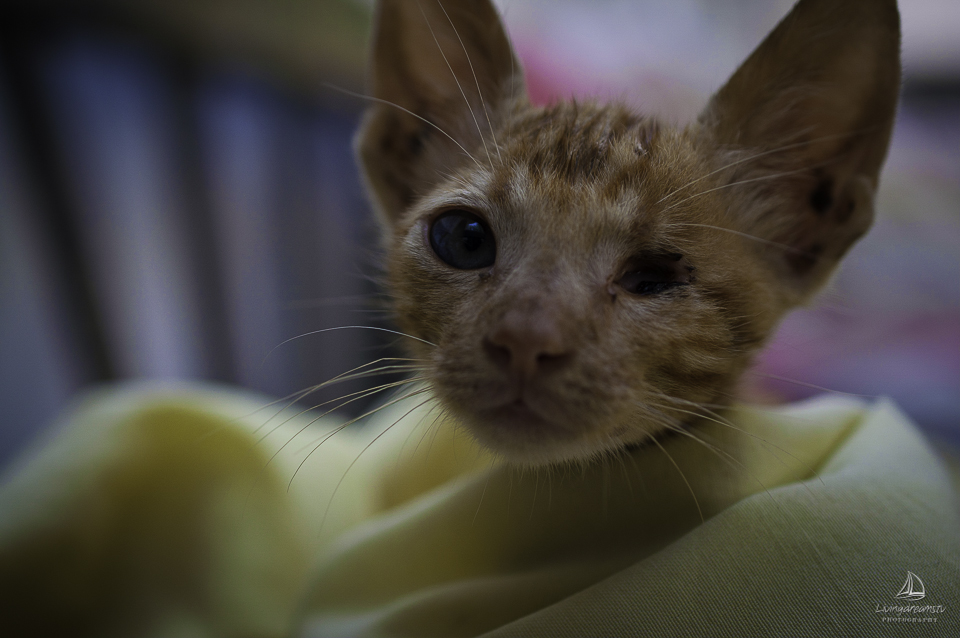 Very nice and moving story! Hope Malaika will come back!

Hey Bro, I love your shots as well as the stories behind!! Keep going and enjoy as much as possible…even though I am pretty sure that you will anyway ;)Hakuna Matata and 1LOVE

Great story, hope you find your cat back 🙂 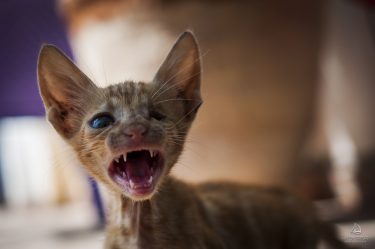 After a whole week of practice, calibration dives and indicators study we finally completed our first survey dive site - moray...