After a day packed with beautiful and new experiences on North Stradbroke Island both of us were quite tired. We had walked a few kilometers and I had been carrying my tripod with the heavy Manfrotto head plus my camera bag. All in all probably 15 kg but this is something I am very used too. Here in Australia I´ve been taking my camera bag almost every where. If possible I take my tripod with me as well – so in case I want to film i am able to take steady footage. Some people might not recognize that, but there can be huge work behind a little photo or a short scene!

Third friendly encounter was about to come

Anways, the sun was slowly setting and we wanted to end this day with a beer and a ocean view and made our way up to Point Lookout where a couple of restaurants and bars are located. After a while a guy looking pretty drunk asked for fire and how else could it Gülsah got into a conversation with him while smoking. Since they had to smoke a distance to the bar I couldn´t hear them talk but after a few minutes she yelled over to pay the beer, we would be joining a bricks. The guy was soon about to get married and they were partying in a house close where we were camping. We got into the car with a couple of other people and drove a few minutes to their beautiful house up a mountain. Around twenty people and two dogs were having a good time with a bond fire, good music and lots of booze. We spend the next couple of hours dancing and talking and kind of forced ourselves to leave at around 11pm, since two dives were waiting on us on the following day. The walk home was quite adventurous – it was pitch black, there were no cars at all and we only had a little flashlight with us. All those crazy unusual sounds to our ears coming out of the forests around us made this walk quite exciting 😉 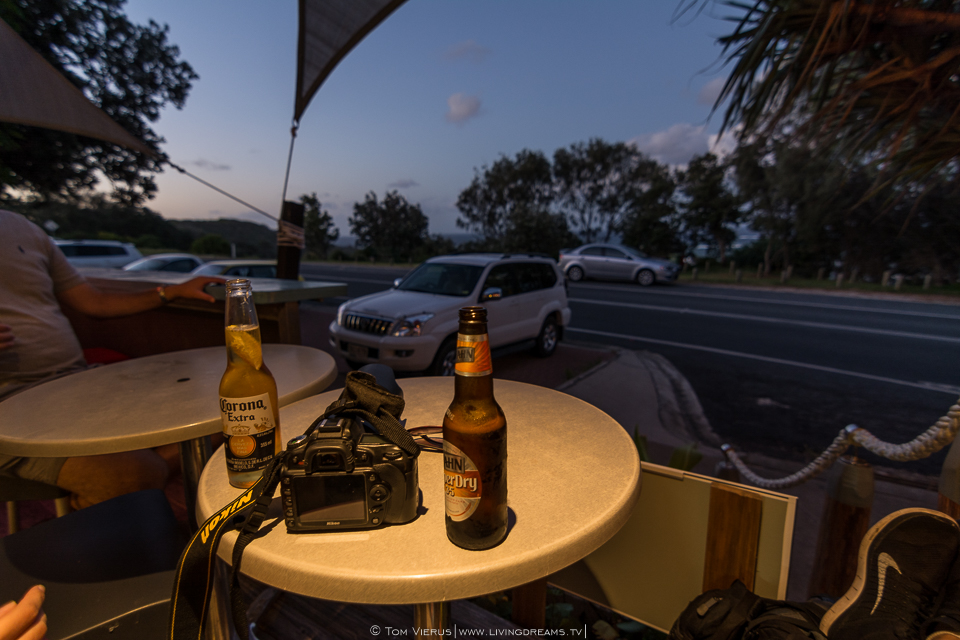 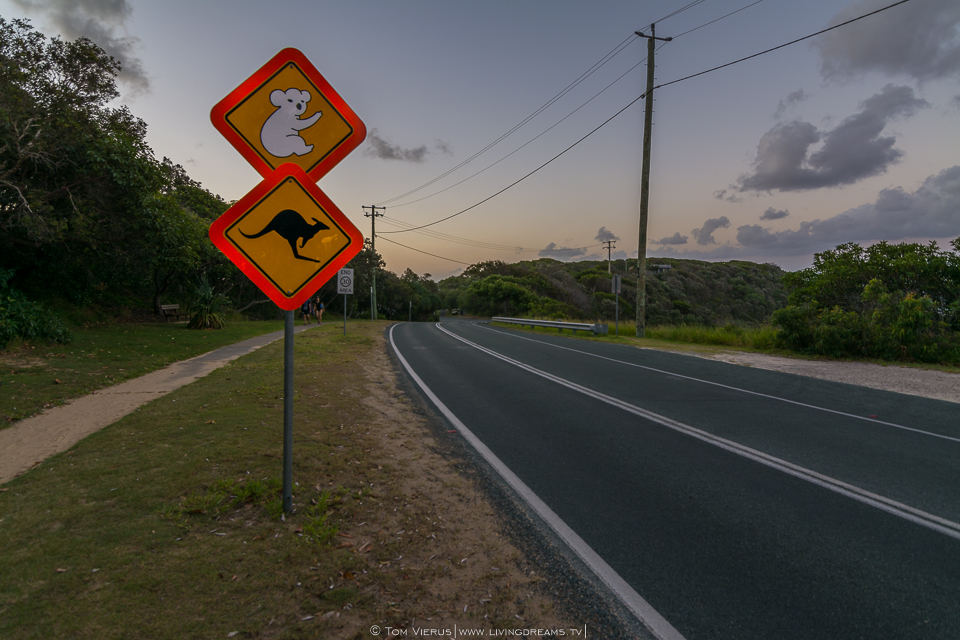 Watch out for wild koalas and kangaroos crossing the road! 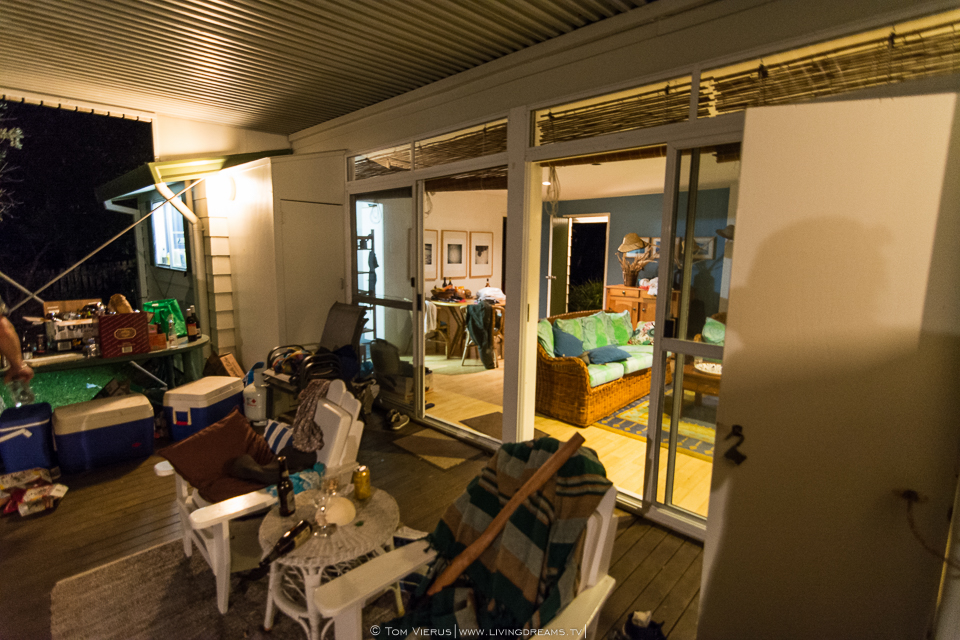 The beautiful house on the hills we were celebrating the bucks with a bunch of great people.

I woke up at 6am. The night was rather bad, since our mattresses were really shitty and we´d forgotten to open the tent a little so the air inside was pretty bad too. My head was still spinning a little, though I was happy to wake up without a headache. To wake up I went the couple of meters to the beach and jumped into the ocean – one of my favorite ways to wake up indeed. 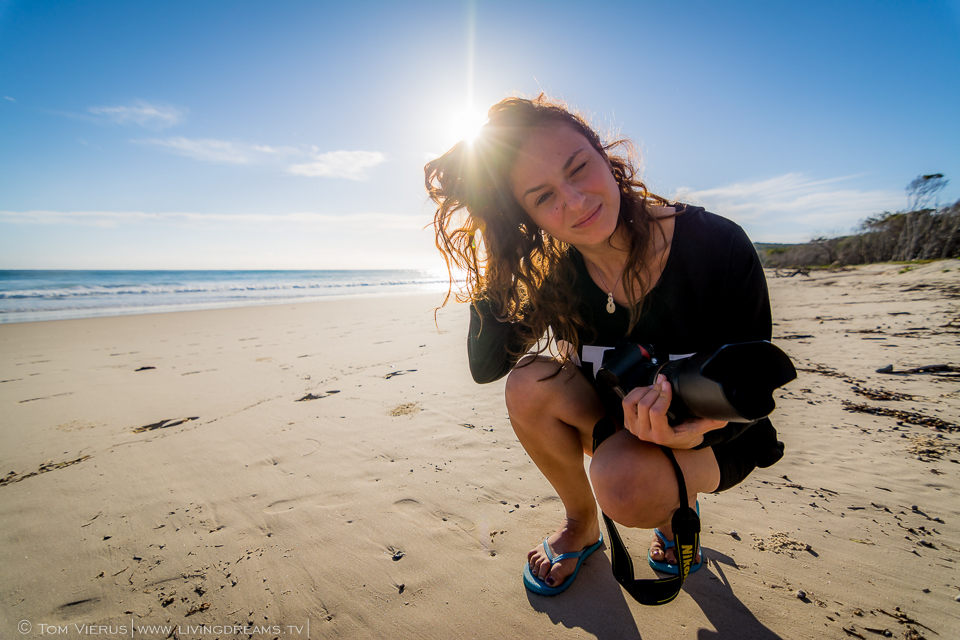 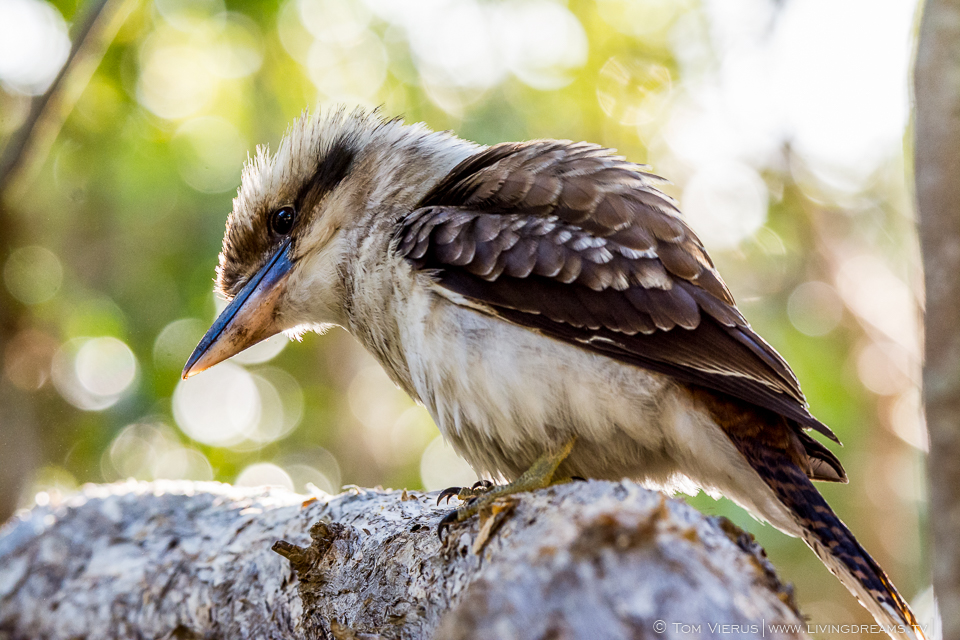 The camping ground at Home beach is inhabited by a couple of Kookaburras, a massive bird preying on lizzards, insects and other small vertebrates.

After a couple of hours chilling and regenerating we packed up our tent and moved towards the Manta Scuba dive center on North Stradbroke Island. It was time gain to get underwater!! It´s been a little over a year since I lasted dived in the beautiful waters of the Gulf of Aqaba and I was looking very much forward to dive again! We sorted out our gear and got on a six meter dinghy that was towed by a tractor. We drove to the beach and were driven into the water with some big engine power. Once we were deep enough the motor was started and we could make our way through the ways. Driving in this boat was freaking awesome – the guy stirring it was jumping around the ways and surfing them with great speed. Sitting in a wetsuit with the bright sun shining on me and two dives ahead I thought life couldn’t´t be much better right now.. 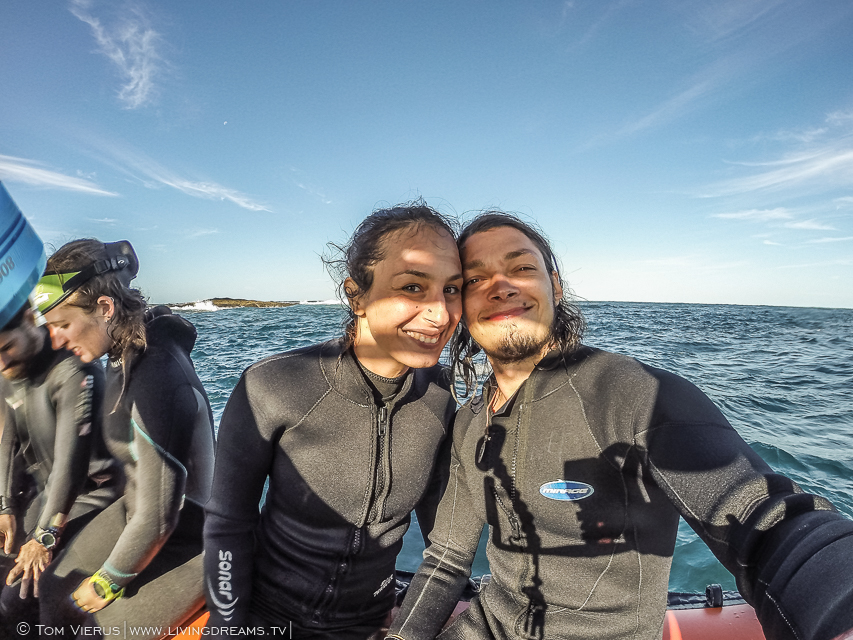 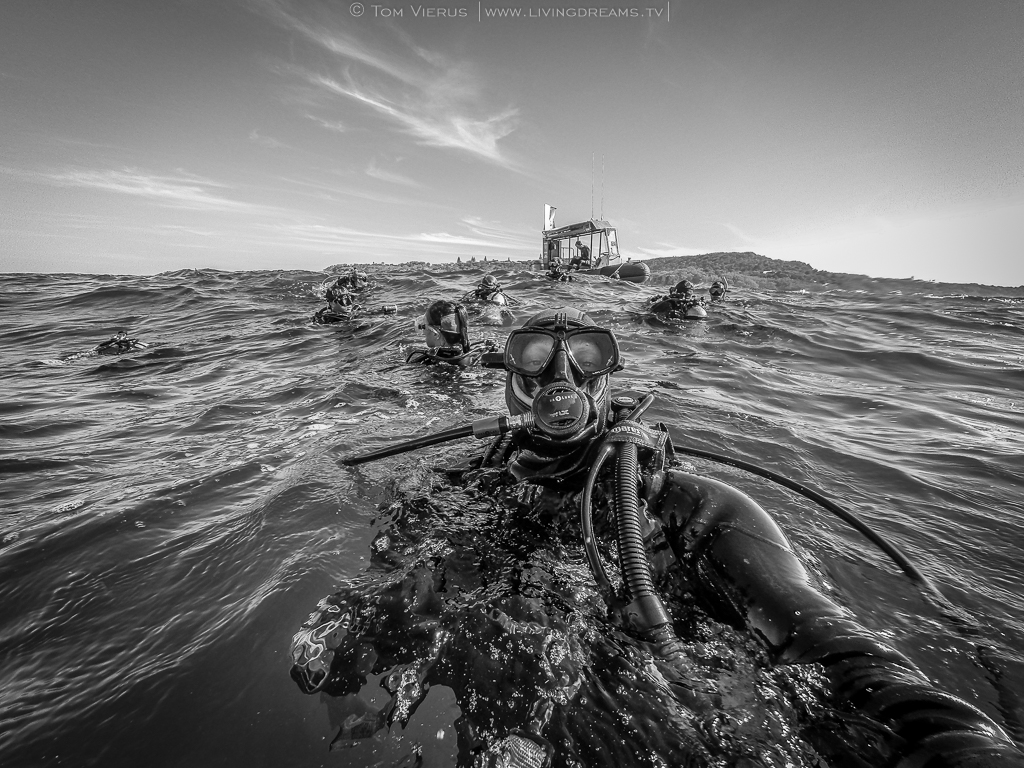 Shortly before descending to the Mantas circling just beneath us in the currents.

We would be diving at Manta Bommie today and guess what we were hoping for! As we got into the water and descended to around 12m the first Manta was already flying along a couple of meters away. Simply majestic, there´s not much else to say. The mantas meet here to feed and get cleaned. The water was relatively turbid – a sign for big primary production which in turn the rays feed on. Reef mantas can reach up to five meters and their oceanic relatives even up to 9m! While watching them gliding above our heads so close that we could have touched them, a little bamboo shark swam rapidly along the rocky bottom searching for food. Not long after we saw the first turtle. After swimming a couple of meters along a small reef ridge we reached a huge sandy area and I couldn´t believe my eyes: Massive bull rays and I mean massive (!) and even bigger stingrays were lying on the sandy bottom. Not only one, not two but three and they were many more to come. They had a wingspan of about two meters with a very long tail and a huge spine and their appearance was really humbling to me. As we got closer they took off and passed me in around three meters distance. Before I could actually think of what just happened the next surprise was awaiting us: A beautiful leopard shark, a bottom-dwelling shark, was lying on the sandy bottom and pumping air through its gills. Around 500 of them aggregate here off North Stradbroke Island in huge numbers every year, making it the largest leopard shark party in the world! While watching it another turtle passed by and another black stingray swam past a few meters ahead of us! What the hell! What was going on here?? So much Mega-Fauna during one dive – I have never really seen anything like that yet. We turned back into the rocky area and again several mantas where circling the rocks showing off all their beauty. Our guide found a hiding wobbegong, a quite bizarre looking shark that hid himself in a crack on one of the rocks. We spent the rest of the dive just watching the mantas flying above our heads in all their grace and magnificence. After almost an hour we ascended and got back on our dinghy. W h a t a di v e!!!! Gülsah and I couldn´t believe what just happened, it seemed quite normal to everyone else! After around a very shaky hour in the dinghy in the current we prepared for a second dive, went back and had just again a dive that was simply mindblowing!! 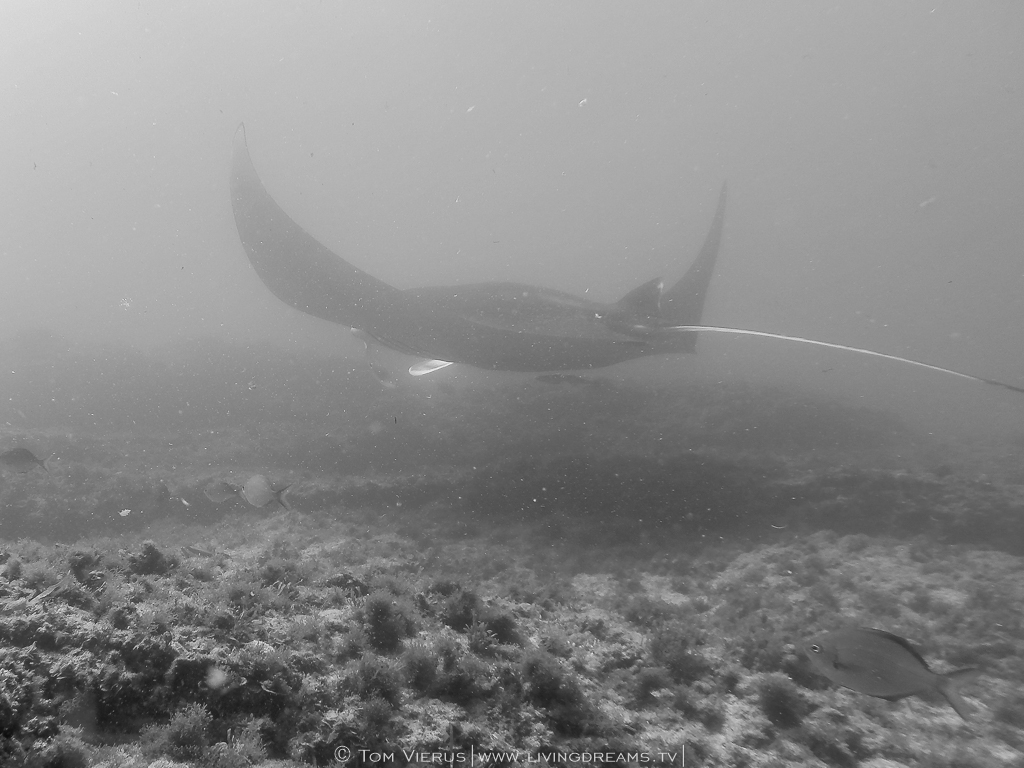 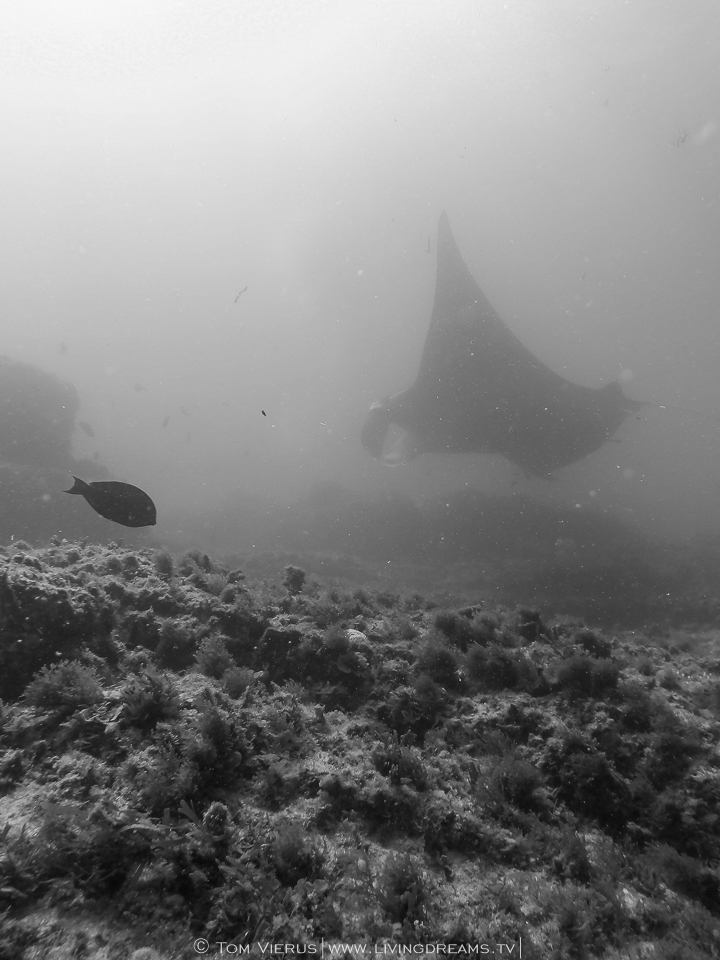 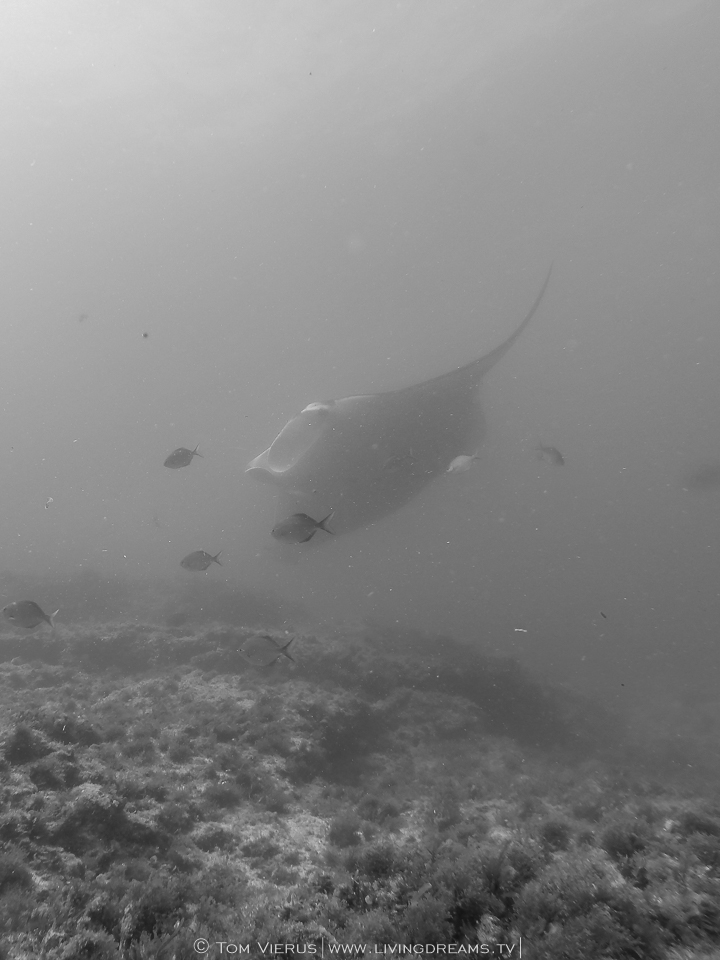 Threats for Mantas
Manta rays are large animals that have very few natural predators. Reef Mantas can grow to up to 5m in width and their oceanic relatives even to an incredible wingspan of 9m! Despite their size their numbers are decreasing in many places all around the world. The biggest threat of all is fishing – direct and indirect. Every year thousand of Mantas die as bycatch and get entangled in nets without being able to free themselves. Many fisheries all around the world (Mozambique, Mexico, Madagascar, India …) also target Manta rays directly. The catching has been part of substantial fisheries in some countries, though the numbers of Mantas being caught has increased rapidly. In many South East Asian communities Manta gills are said to have certain powers and are used as traditional remedies. Manta gills can sell for up to 220 Dollars per Kilo in China (Mantawatch) making it a lucrative business. Other anthropogenic threats include habitat degradation, boat strikes or unsustainable tourism. For further information please visit MantaWatch or MantaTrust!

There is so much magnificence in the ocean.. On the way back, again surfing some waves with good speed I was fully filled with deep joy and contentment. What a weekend, what an island.. We were deeply impressed and already planned our next weekend trip. Let´s see if we can find some dolphins to swim with them, some people told us we might find some at Amity point, one of the three little settlements on Straddie! 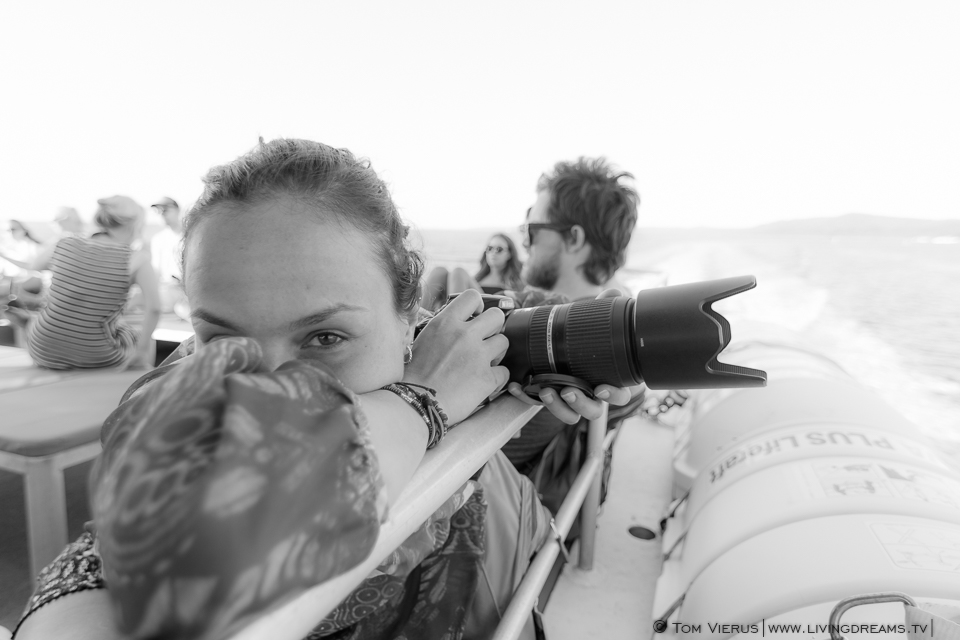 Exhausted but very happy on the ferry back to Cleveland. 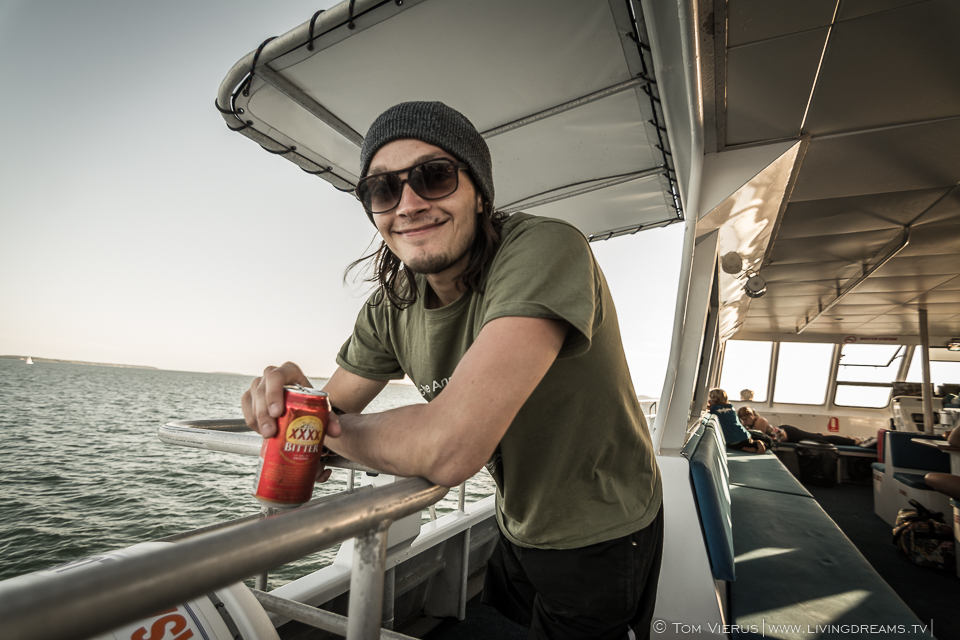 Where is North Stradbroke Island?

I’m happy for you both! – and a little jealous 🙂

I´m a bit jealous 😉
Sounds like a great experience – mantas and sharks in one dive!
I saw “only” one manta ray 2 years back in Sharm el Sheikh and it was breathtaking (can´t wait to get to Dahab and see all this underwater beauty in may).
Hope to see some nice video footage of your dives in Australia because I really enjoyed your Dahab diving videos!
Keep up your beautiful photo work and blogging – it´s really a pleasure to follow!
Best regards!

Hey Patrick, thank you for your comment!
It indeed was a dive that will stay in my memory.. You´re right, it doesn´t matter if you see one or many – they are simply as breathtaking and graceful as it can get and their appearance is always wonderful!
So you are going to Dahab in May? Just for holidays? I am also hoping to visit Dahab for a week or two at the end of my semester in August.
Thanks for your kind words, happy you enjoy it – and yes, there will be a movie 😉

Yes, this time only for holidays. I would love to do another Coral Project but I simply have not enough time. But 2 weeks in Dahab will be a pleasure anyway and I´m looking forward to meet Nina and the Sinai Divers staff and have some nice dives. Since my first stay there, this place is kept in my heart!
Hope you get to Dahab in August!
All the best,
Patrick

[…]  Stay tuned for the second part and find out what our third ozzy encounter had in store for us.. […]

world is beautiful through ur lens and words…. thanx sathi….

Thanks for the nice words Sewa 🙂 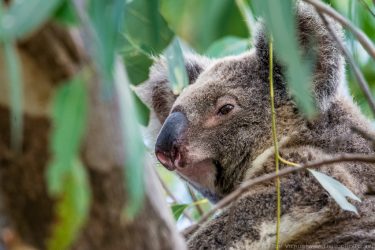 North Stradbroke Island is with its 275.2 km2 the second biggest sand island the world and just 50 km from Brisbane. In order...