Mangrove forests harbor a diverse group of trees capable of growing in marine intertidal environments. They do not rely on saltwater but are able to tolerate it. According to the IUCN, there are 70 species of mangroves, of which 11 are threatened with extinction (www.IUCN.org, 2013). Mangrove trees have developed a range of incredible adaptations to deal with the harsh environment they live in (saltwater, changing intertidal regimes).

Being very abundant on tropical coasts mangroves are often referred to as “tropical forests by the sea”. They can be found in 123 countries and cover about 152.000 km2 in the tropics and subtropics (Spalding, 2010) with the largest mangrove forest being the Sundarbans forest comprising appx. 10.000 km2 across Indian and Bangladeshi territory.

Specialized roots enable mangroves to “breath” and anchor in soft sediments
Mangrove habitats are usually very low in oxygen beneath the surface, especially in the sediments where microbes deplete available oxygen during metabolizing processes. In order to deal with this unhostile environment, specialized forms of roots have emerged which enable the tree to breathe oxygen from the air, even when the roots are submerged in water. 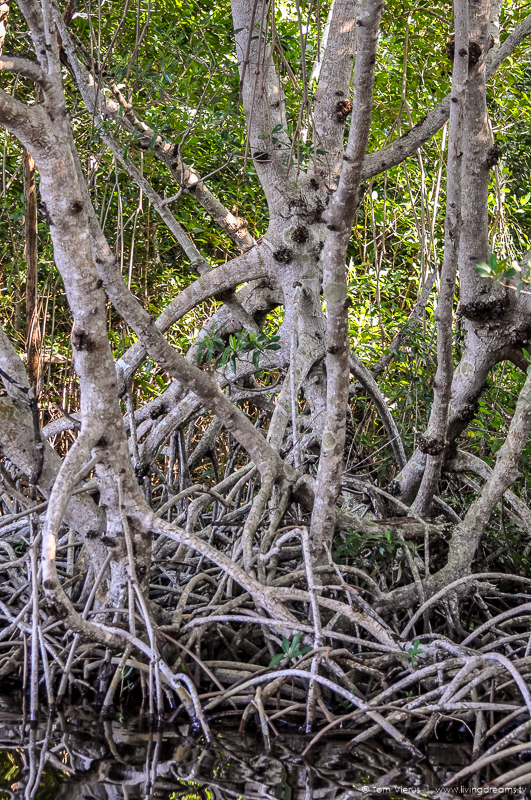 There are three big types of mangroves – red, black, and white mangroves.

Red mangroves developed so-called aerial prop roots (right image) that keep them above the water with specialized cells in the bark – the lenticels that absorb oxygen and fight hypoxia (= low oxygen). These roots can reach up to 3m and can be divided into four different types: Prop roots, snorkel or peg roots, knee roots, and ribbon or plank roots. 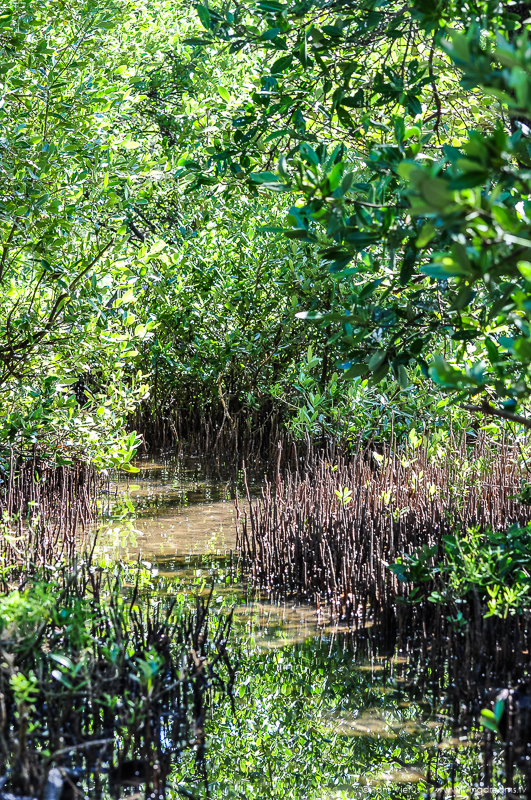 These “extensions” enable red mangroves to directly grow in the water on the shoreline, whereas black mangroves prefer mudflats without being covered by water. They rely on their snorkel-like pneumatophores (left image) that stick out the water to fulfill the exact same purpose and breathe oxygen from the air. Every tree may grow several hundred of them to sustain itself with enough oxygen in an otherwise very hypoxic environment. White mangroves follow the same strategy preferring a rather dry land that is only occasionally flooded by water. When salt enters their roots, it is filtered through the trunk of the tree and then excreted by the leaves. If you’ve ever been to a mangrove forest you might have seen the salt accumulating on certain leaves. Some species deliberately store salt within their oldest leaves which are then eventually shed to remove the salt from the system. An incredible adaption if you ask me!

Often the three different types are found within the same area following a zonation pattern from sea to land, or from red mangroves over black mangroves to white mangroves as illustrated below:

Long-distance floating mangroves seeds that already grow on the trees 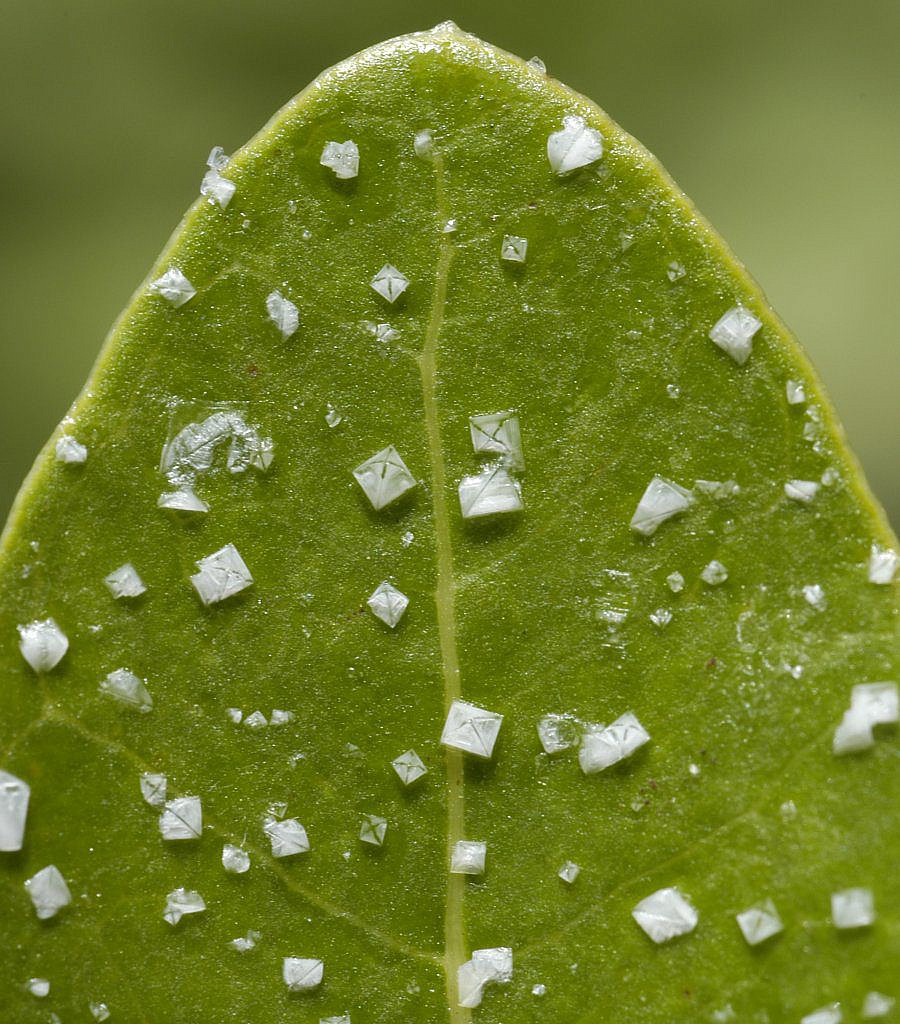 All mangrove species use the water to disperse their seeds but only some are viviparous meaning their seeds already grow to seedlings on the plant, some as high as 1m (!) before being released into the water. This has one decisive advantage: the fully-grown propagule (= seedling) is ready to anchor itself wherever it gets washed up once it’s fallen from its mother tree. The already developed plant is capable of photosynthesizing and growing straight away instead of being washed back and forth by the incoming tides. All seeds are buoyant, i.e. capable of floating and some do so over very long distances of up to several kilometers. Some mangrove trees’ propagules may even flow long-time spans of up to one year!

Mangrove trees are so-called foundation species (Pennings & Bertness, 2001). Their roots and trunks provide habitat for other organisms that wouldn’t be able to establish themselves in areas with loose sediments. Epibionts (organisms living on the surface of another organism) settle on their roots and live in a mutual relationship with the tree: they benefit from one another by exchanging nutrients. Other organisms that settle on roots are sponges, macroalgae and invertebrates.

Who lives in mangrove forests? 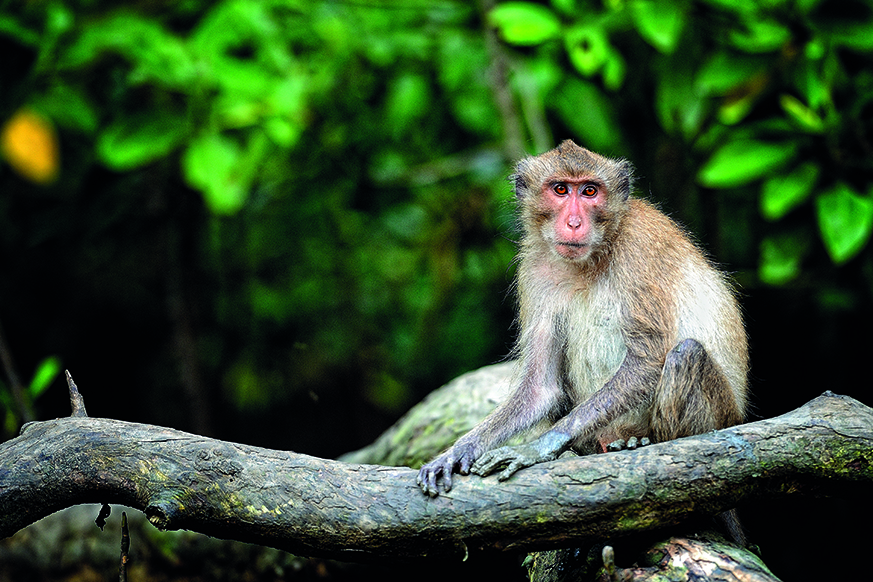 Mangrove forests burst of life. All kinds of animals can be found here from big mammals like tigers or monkeys up to a wide range of invertebrates like crustaceans and snakes. They also provide important nesting grounds for dozens of bird species and act as nursery areas for a wide array of aquatic organisms like sharks (e.g. White & Potter, 2004) and reef fish (e.g. Nagelkern, 2009). Mangrove forests are natural biodiversity hotspots.

One of the most important inhabitants is the mud crab. The burry great tunnel systems and stand at the very beginning of a long food chain: they munch on the fallen leaves of mangrove trees, enhancing their surface and enabling many other organisms like invertebrates and microorganisms to process the organic matter faster. This way nutrients are freed which benefit adjacent marine inshore areas like seagrass beds and coral reefs (Duke et al., 2007).

What are the functions of mangroves?

Mangroves enhance and trigger the growth of phytoplankton (due to the provided nutrients) which in turn supports adjacent fish populations. They not only serve as a source for nutrients but also act as a sink for excess nutrients and thus play an extremely important ecological role in coastal areas. Numerous studies have shown the connection between mangroves and fisheries. An intact mangrove forest can substantially impact fishing yields and cleared areas are often followed by a collapse and/or sharp decline in catches (e.g. Carrasquilla-Henao et. al, 2013). 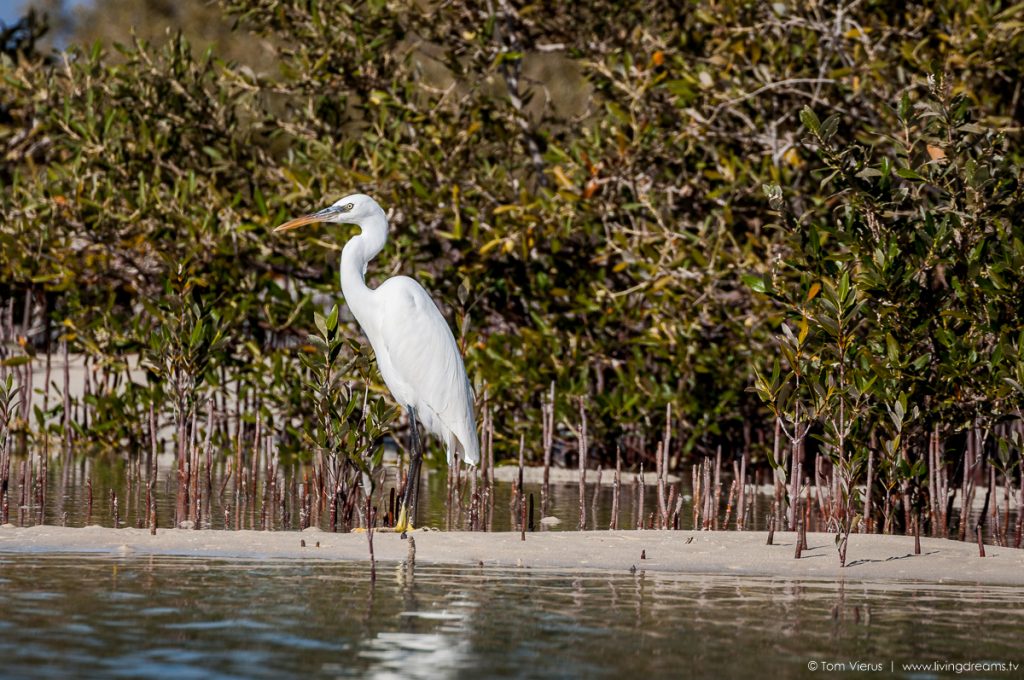 But it doesn’t stop here. Mangrove forests are also among the most carbon-rich habitats on earth (Hutchison et. al., 2014)! They play a huge role in carbon sequestration (i.e. uptake of carbon from the atmosphere) and can help to counteract climate change. Huge amounts of carbon are stored in the sediments and within the roots and trunks systems of the mangrove trees. They are thus not only able to absorb (sequester) CO2 from the atmosphere but also store it away forming a so-called carbon sink.

A study carried out in 2011 by Murray and his colleagues suggest that mangrove forests may be able to store as much as three to five times the amount per unit area of carbon than tropical rain forest does. By preventing habitat destruction and improving mangrove conservation and protection we are not only helping endangered animals keeping their living space, but we are also doing a huge favour to all of us and planet earth.

How can we benefit from protecting them?

Besides the fact that mangroves provide important habitat for hundreds of species, they offer a range of highly valuated ecosystem services to us. They are valued at least 1,6 billion dollars in ecosystems services and sustain communities in many regions of the world (Polidoro et al., 2010) by providing food, ﬁre wood, shelter, and sustainable tourism opportunities to local people.

As transition zones between land and sea, they clean land-driven wastewaters and sewage by filtering the water and burying many kinds of toxic substances like heavy metals, dioxin-like compounds, and other pollutants. Mangrove roots cause the water to slow down and enhance sedimentation, which traps colloidal particles in the fine sediments as well. Generally, the water flow through mangroves forests disperses point sources of e.g. industrial wastewater and sewage into vast areas and dampens the negative environmental effect.

Natural protection from tsunamis and hurricanes

Mangrove forests act as natural protection in the case of storms and decrease erosion on coastal areas. The huge amount of biomass dissipates the energy of incoming waves and may greatly decrease the impact of hurricanes and tsunamis in coastal areas (e.g. Dahdouh-Guebas et al., 2005). 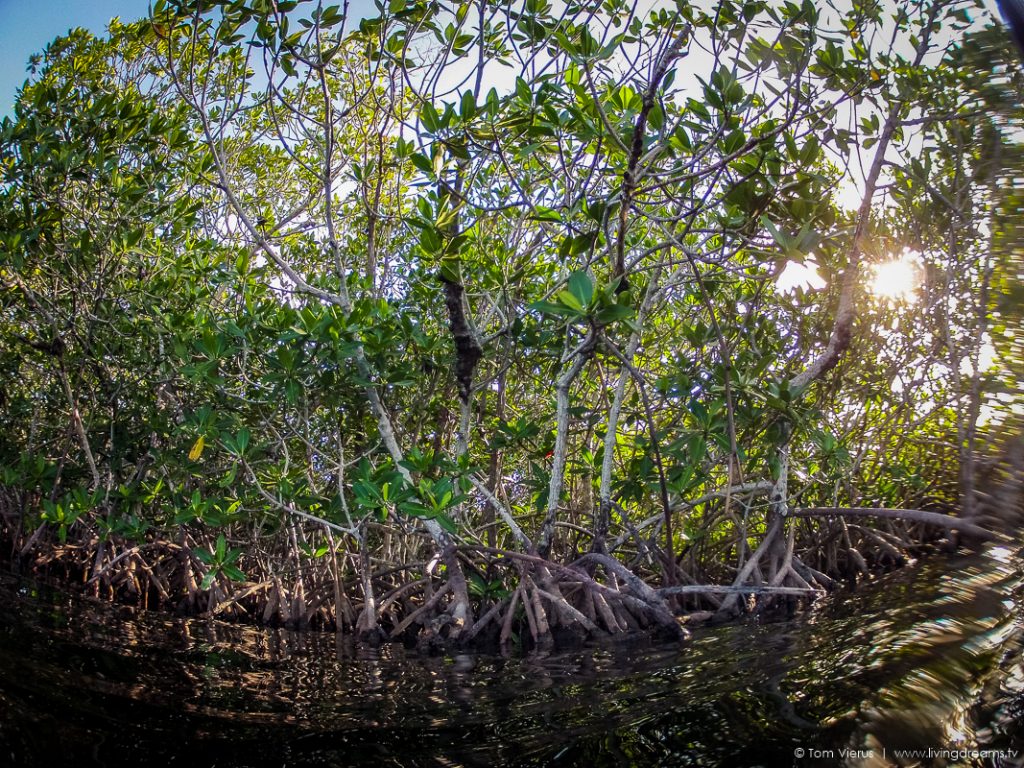 Mangroves serve as kindergartens for many species

The provided habitat enables many species to nurse in the shallow and usually clean waters of mangroves and a large amount of species stays here for a certain period of life to grow while being protected from bigger predators and benefiting from high prey availability. A few examples are shrimps, sharks and reef fish as well as other pelagic predators.

What can we do to help protect and conserve mangrove forests worldwide? 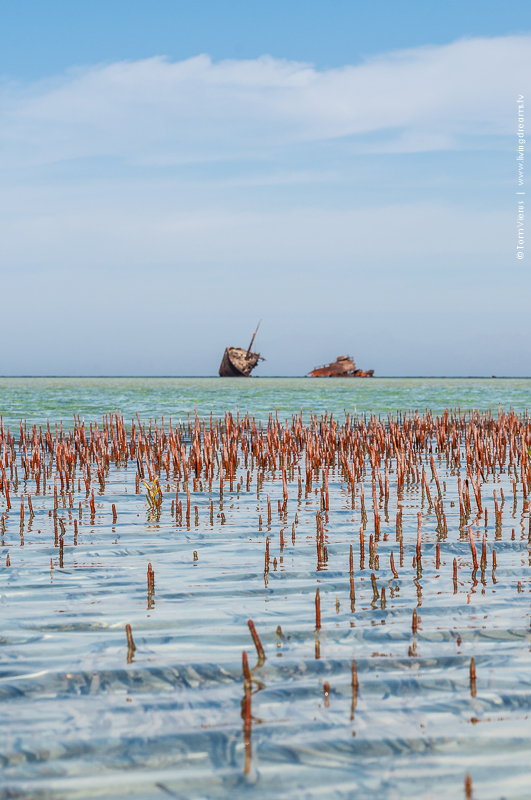 Mangrove roots in Nabq, a protected area in Egypt.

According to a study in 2008 (Elison), shrimp aquaculture is responsible for approximately 38% of worldwide mangrove loss!

Once again – especially in the westernized world: our consumer behaviour is our weapon of change! By buying cheap shrimps coming from dubious shrimp farms in Asia, we support the future clearance of mangroves and keep their unsustainable business breathing. Not only shrimps are the problem, but also newly built resorts other infrastructure within mangrove areas can have bad impacts on the global mangrove populations. If you are living in an affected area try to organise resistance or join a local conservation group and engage in activities.

If you have any comments or recommended organisations to support, please share below!

About mangroves – Mangroves and more

[…] strength over the weakened corals. One of the major ecosystems affected by habitat destruction is mangrove areas, which both act as nursery areas for juvenile coral reef fish and filter the land-driven […]

A Day in the Mangroves – Wetlands and Wildlife

[…] that no two mangrove habitats were the same and pointed out that the classic red, black and white mangrove zonation, depicted in textbooks, are only truly found in ridge and swale […]

[…] Besides supporting communities by training villagers to become divers, feeders and fish wardens, BAD has sponsored the replanting of several hectares of mangroves to meet their annual carbon footprint (mainly due to the engines on their vessels). As of 2010, they were able to claim that they could compensate not only for their own carbon footprint but also that of their customers traveling to Fiji (fijisharkdive.com). They are part of the project Mangroves for Fiji that supports and enables Mangrove reforestation. BAD pays FJD $1000 per hectare, actively helping conservation of these critical and important trees. If you want to know more about mangrove forests and how they help us battle climate change have a read through this article. […] 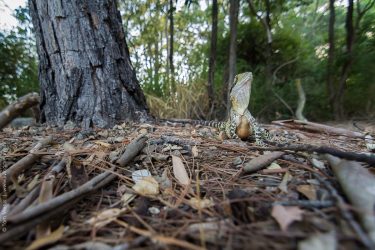 Animals of Australia - a little Film Expedition in Queensland

This year I´ve been twice to Australia - six weeks earlier this year and just three weeks ago I spent another two weeks...