On a recent assignment for Urgewald, a German NGO that you can read about more here, I fly to a country many people will never have heard about: Guyana. This natural jewel lies in the north-east of South America and borders Venezuela and Suriname. Less than 900.000 people call Guyana their home and a vibrant mix of cultures and ethnicities has made this country a melting pot of influences from the Caribbean, India, Africa and South America. 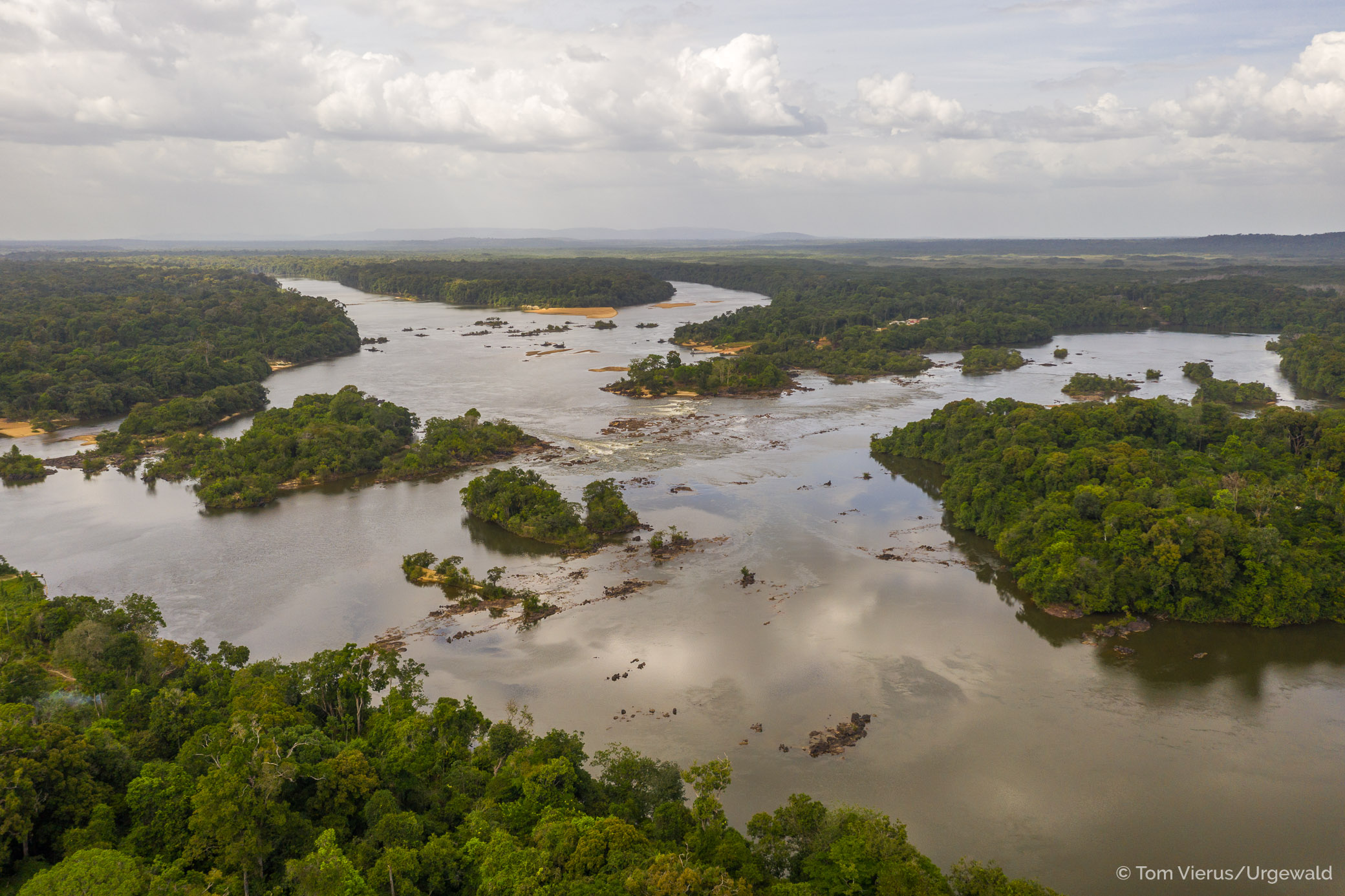 Aerial view of the Iwokrama Forest in central Guyana. 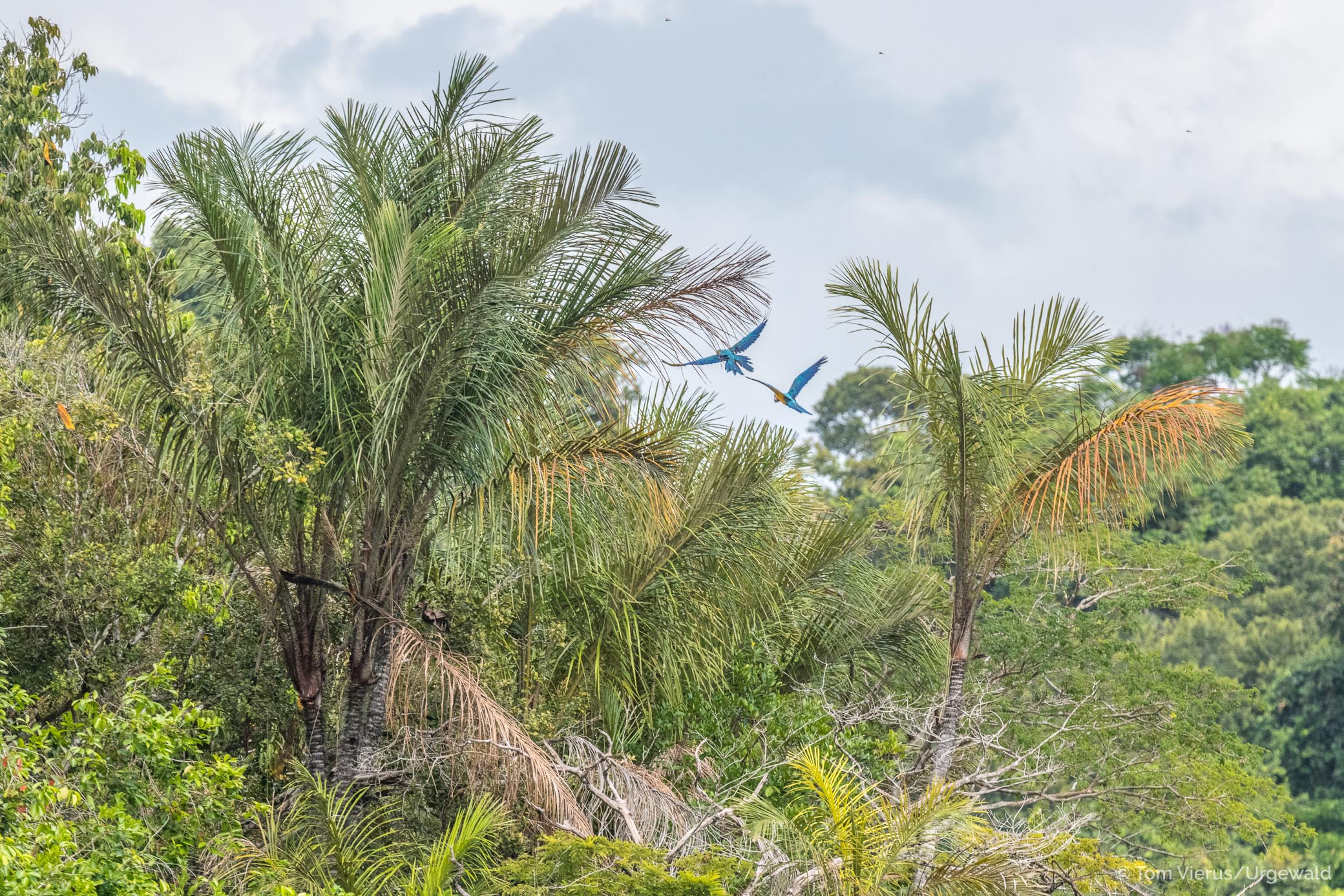 Collecting information for an upcoming campaign

A day after I arrived in Guyana, I met two members of Urgewald who had just arrived all the way from Germany. For the coming days, I would follow them on their fact-finding mission through Guyana. Their aim was to get a feeling for the country and its people, conduct interviews with various types of representatives, document its vulnerability to climate change but also experience and highlight Guyana’s incredible eco-tourism potential. 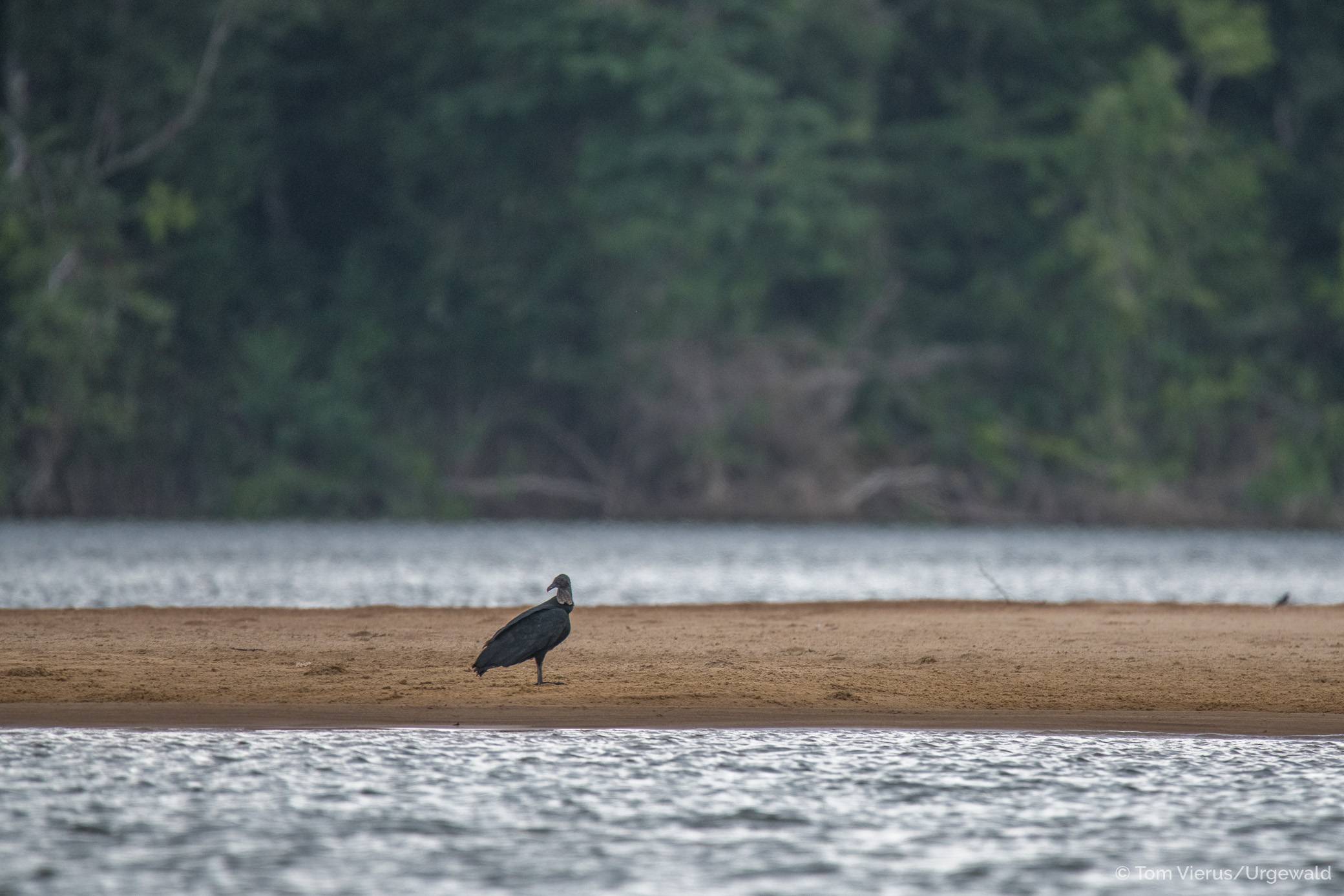 A black vulture (Coragyps atratus) rests on a sandbank at the Essequibo river in the interior of Guyana.

Something I just learned there, really surprised me: did you know that Guyana won the 2019 “Best Ecotourism Destination Award” which was even presented in Berlin, Germany? I surely didn’t and it made me realize that Guyana has a long way to go in promoting their country to a vast audience across the globe (while of course making sure to handle incoming tourism sustainably). 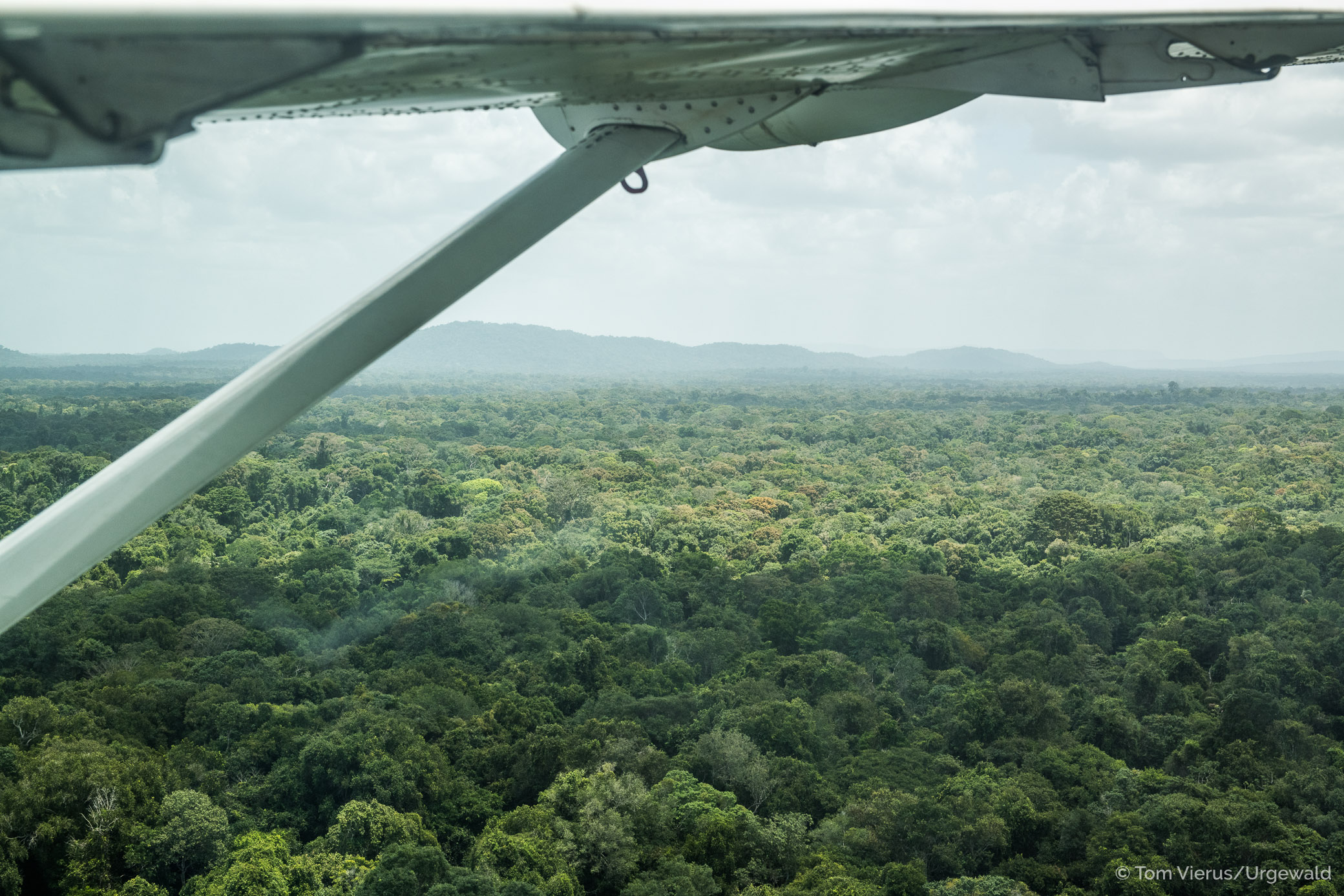 The Iwokrama forest from the air approaching the small Iwokrama landing strip.

Ecotourism in Guyana at its best – The Iwokrama forest

The absolute highlight of the trip was a four-day rainforest tour that started in the stunning Iwokrama forest. This area constitutes one of the last four remaining pristine tropical forests in the world (along with Congo, New Guinea, and the Amazon rainforest) and stretches in Guyana’s interior for almost 4000 square kilometers. This particular forest is home to the highest richness for fish (more than 420) and bats (90) compared to any area this size in the world. With more than 500 species of bird, the Iwokrama forest is also an incredible bird biodiversity hotspot.

We flew from Georgetown via Lethem to Iwokrama where we picked up by staff working at the beautiful Iwokrama lodge. The flight itself was scenic and we past seamless never-ending rainforest, but at the same time passed vast burning areas and destroyed savannah habitats that looked as if gold mining had taken place. 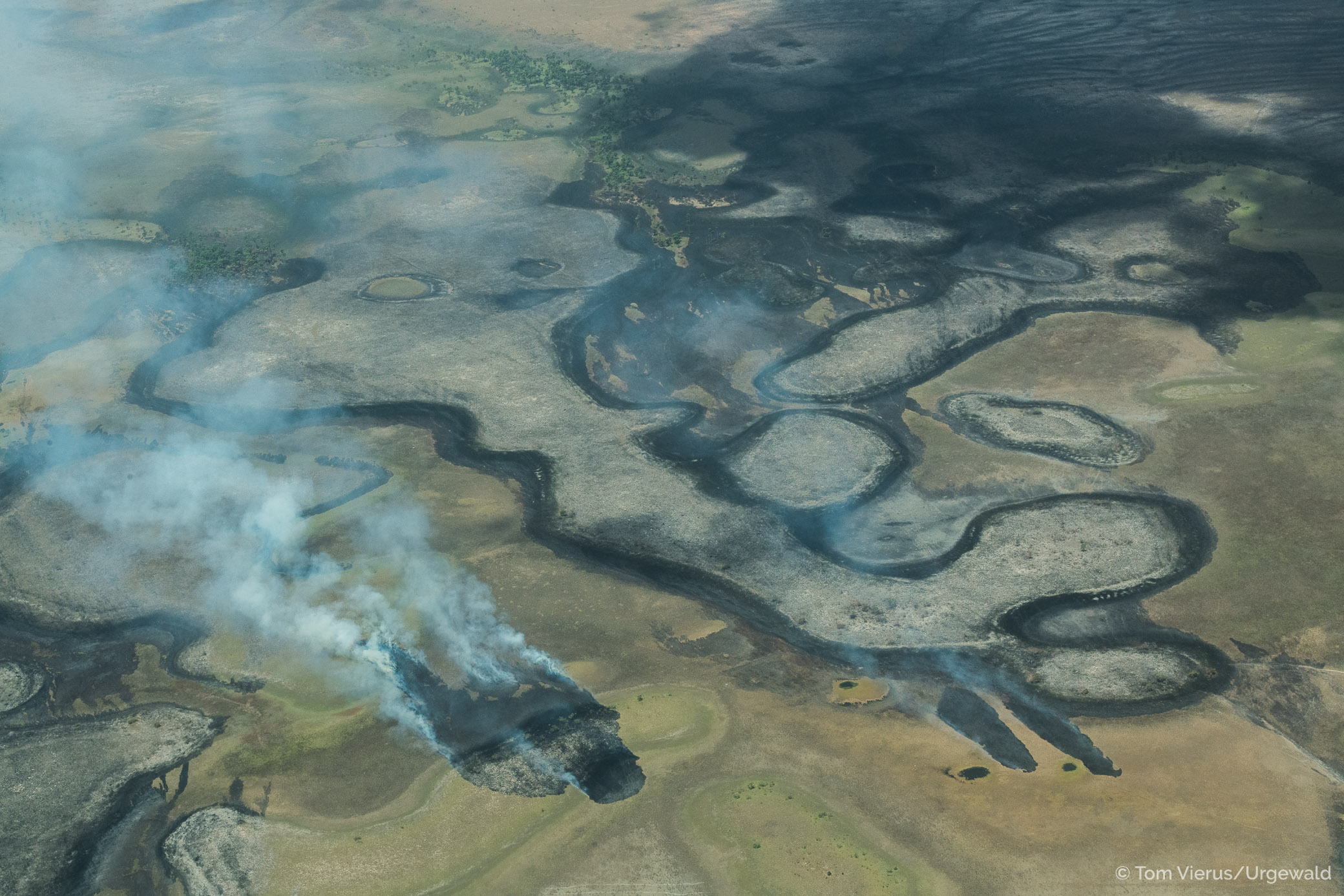 Vast stretches of land burnt and burning bushland in the area of Lethem, close to the Brazilian border in the south-west of Guyana. 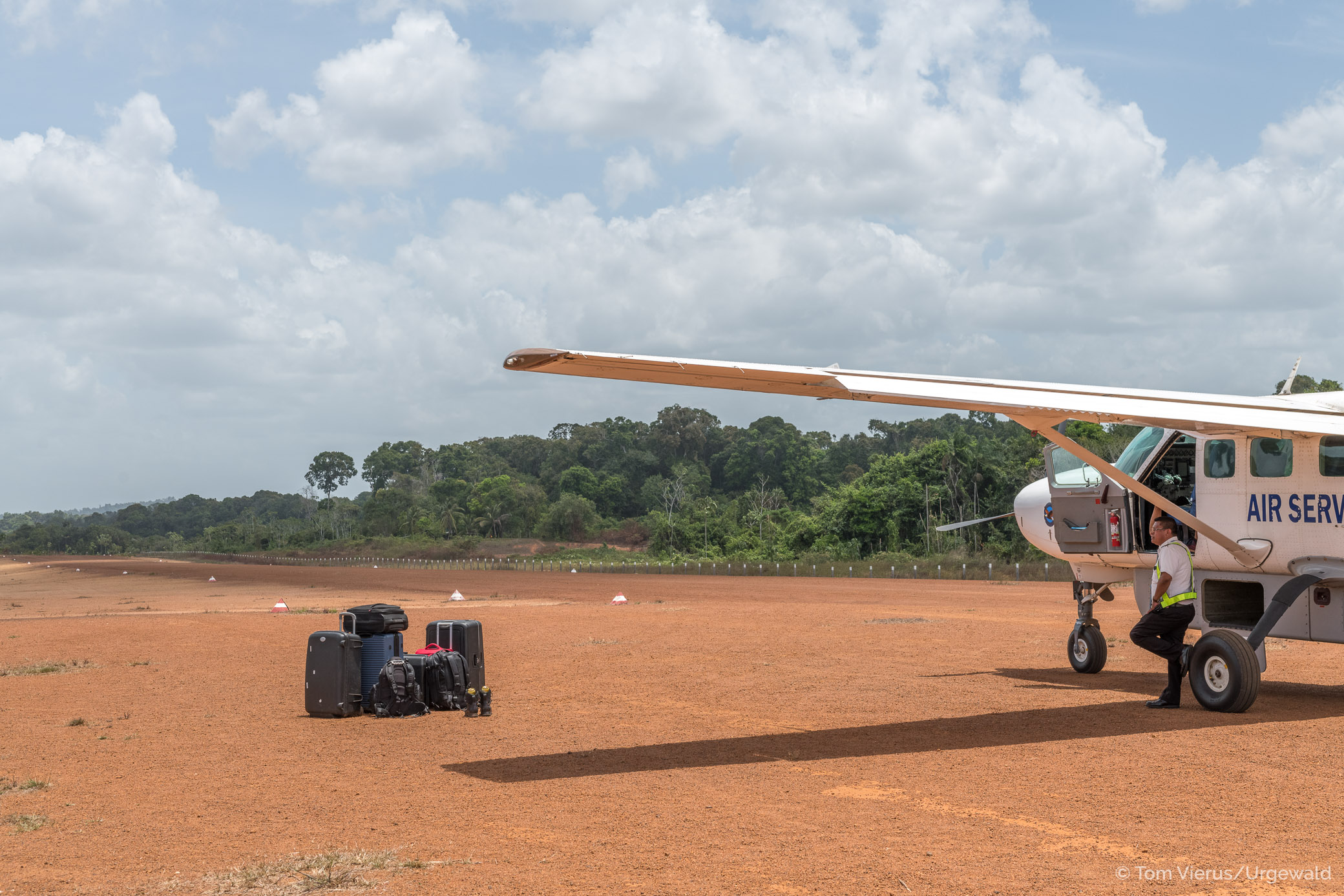 The Iwokrama airport in the interior of Guyana.

The coming days were designed to get the most diverse impressions of what Guyana has to offer in regards to fauna and flora and that meant time was sparse: we traveled hours in cars, slept three nights in three different places and woke up before sunrise every morning. But all of it was more than worth it: we witnessed the sun go down over the Essequibo River in the heart of the Iwokrama Forest, spent the sunrise driving through vast savannah habitat looking out for the giant anteaters and watched howling monkeys in the distance basking in the golden evening light from a canopy walkway high up in the tree crowns. 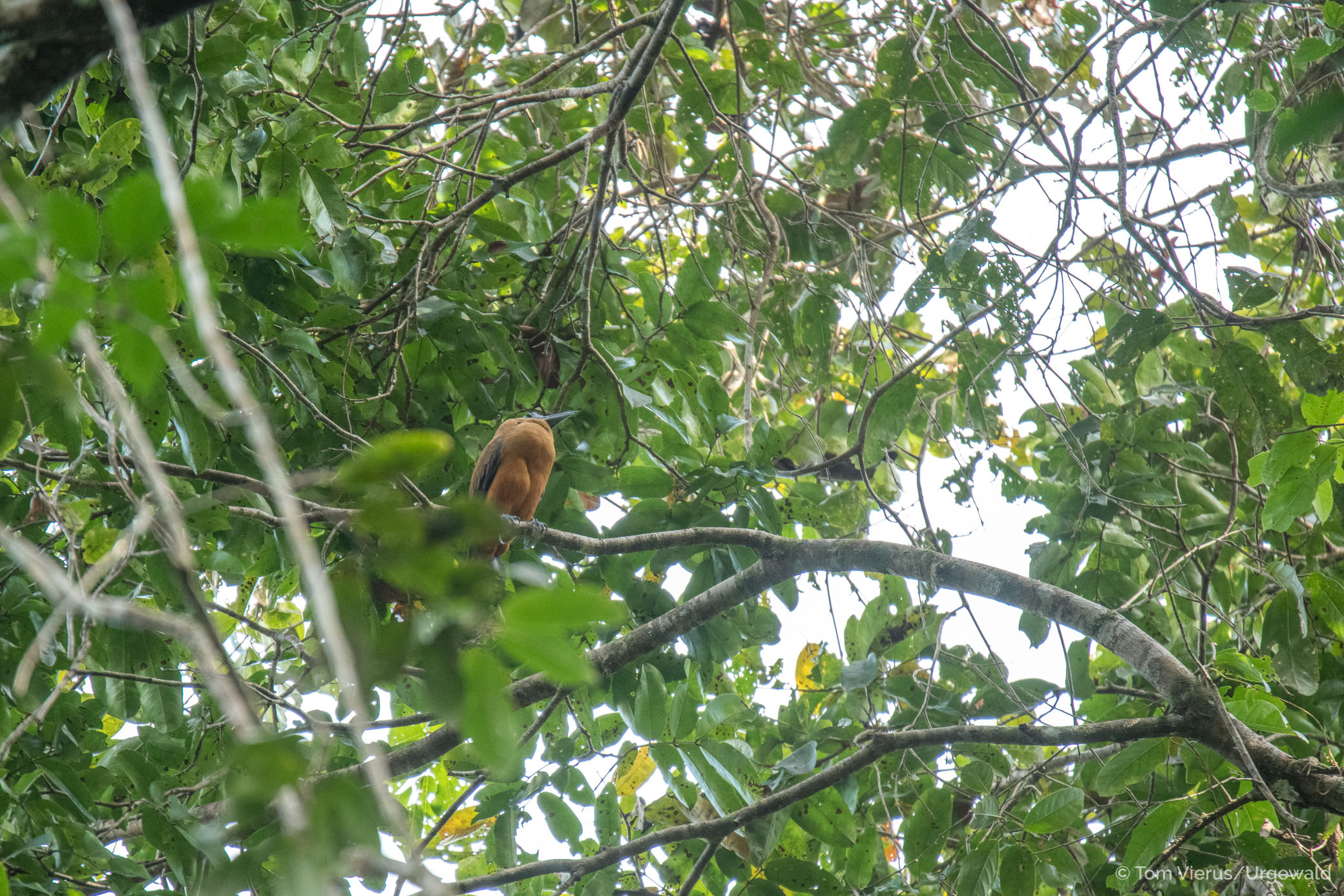 A Hoatzin (Opisthocomus hoazin) high up in the tree crowns in the Iwokrama forest in Guyana. 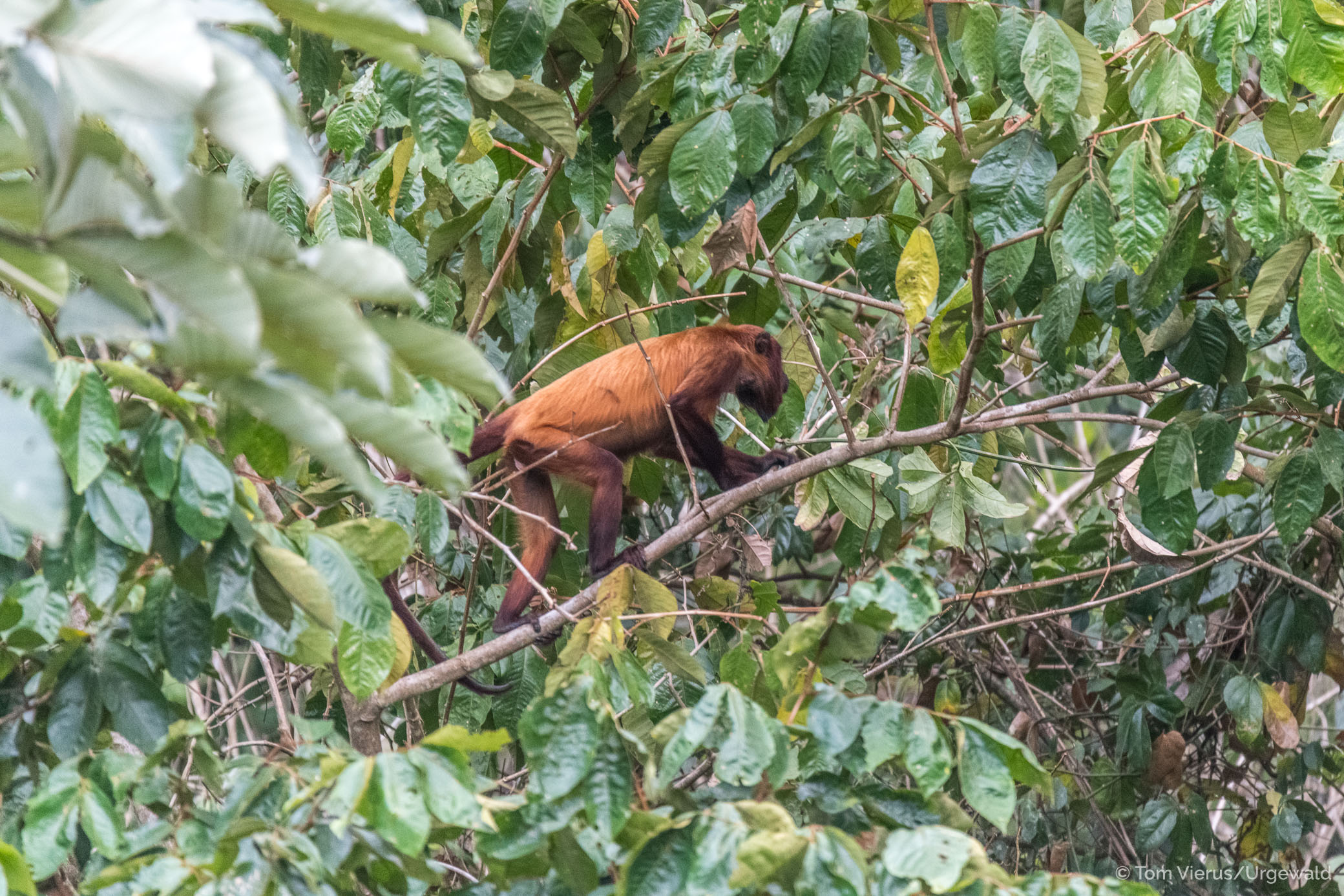 I am a huge fan of birds and what we have seen in Guyana made my heart really smile. A total of 784 birds are confirmed for Guyana with some extremely rare and beautiful species. During a rainforest walk starting directly at the Iwokrama lodge, we spotted the Hoatzin (Opisthocomus hoazin, Guyana’s national bird) but unfortunately, it was too high up and I couldn’t manage to get a decent shot. Shortly after, Luke Johnson, our extraordinary guide (and bird enthusiast) that accompanied us during our whole Guyana trip, spotted the small and rarely seen spotted Antpitta (Hylopezus macularius). 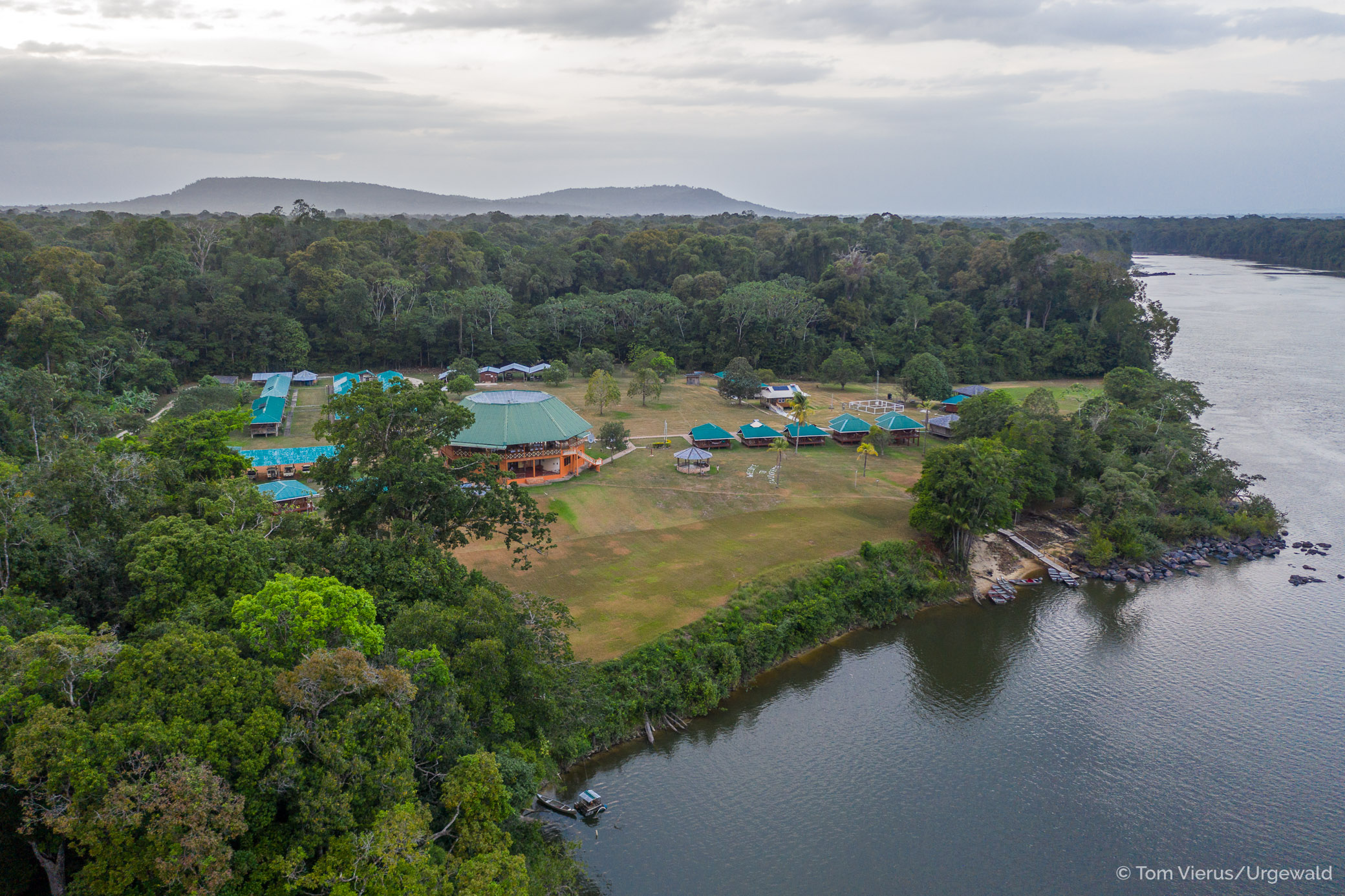 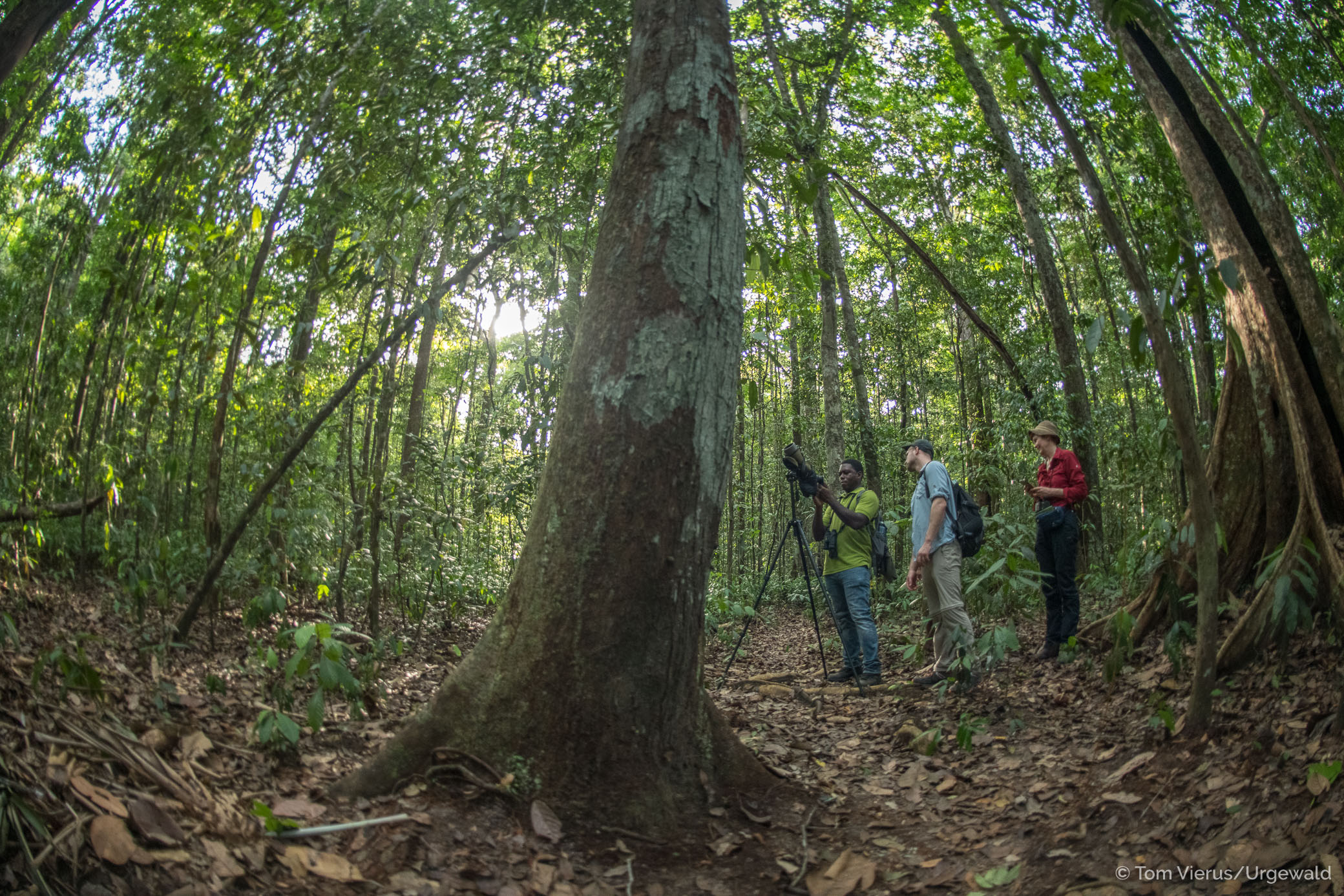 Luke, Ute, and Denis in the Iwokrama forests observing birds.

Highly technical photography in the rainforest

Luke our local guide, as well as Ute and Denis, kept as still and quiet as possible while I very slowly tried to approach the bird a little closer. I managed to get a decent shot but had to push the camera to its limits. Generally, photography in the rainforest is technically extremely challenging. Due to the low amounts of light and the fact that one hardly ever has a clear line of vision, much of a good photograph has to be taken fully manual. Branched and twigs almost certainly mean there is no way of using autofocus, so what I tended to do is take a series of shots while slightly adjusting manual focus. This way I would end up with unsharp photos just before and after the focus is nailed but also ensure the actual nailing shot is part of the series. 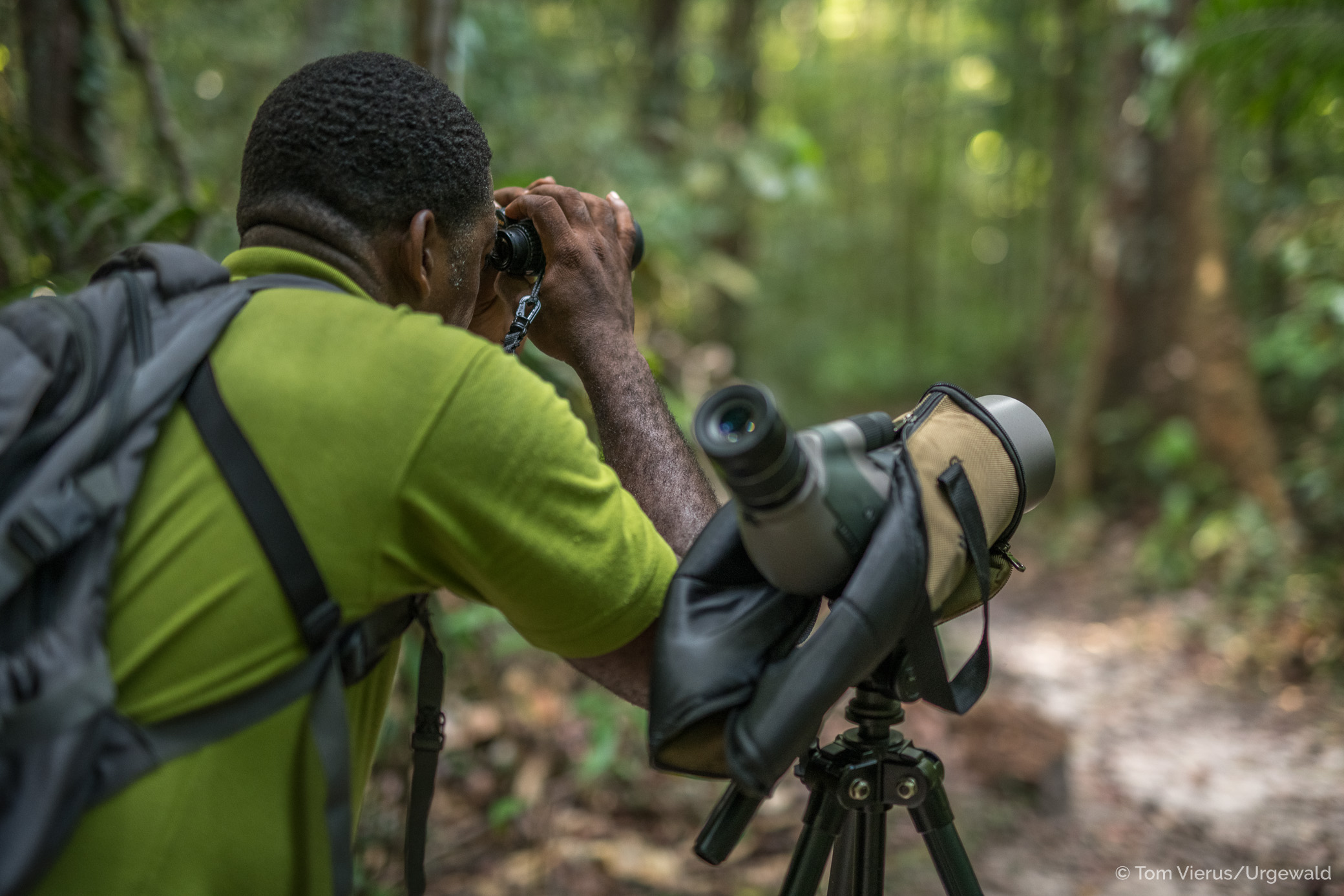 For wildlife, I mostly used my old Tamron 150-600mm f/5.6-6.3 and occasionally took shots at 1/100 sec which are still fairly sharp. That – of course, only worked when I had my tripod on me (which was basically all the time) and after having waited a moment to minimize any disturbances my tripod movements. As I tried to film as much as possible I needed my tripod –  there is no way to create any usuable footage using the Nikon D850 in combination with the Tamron handheld. Way too heavy and all tricks (arms against body etc.) won’t change that. 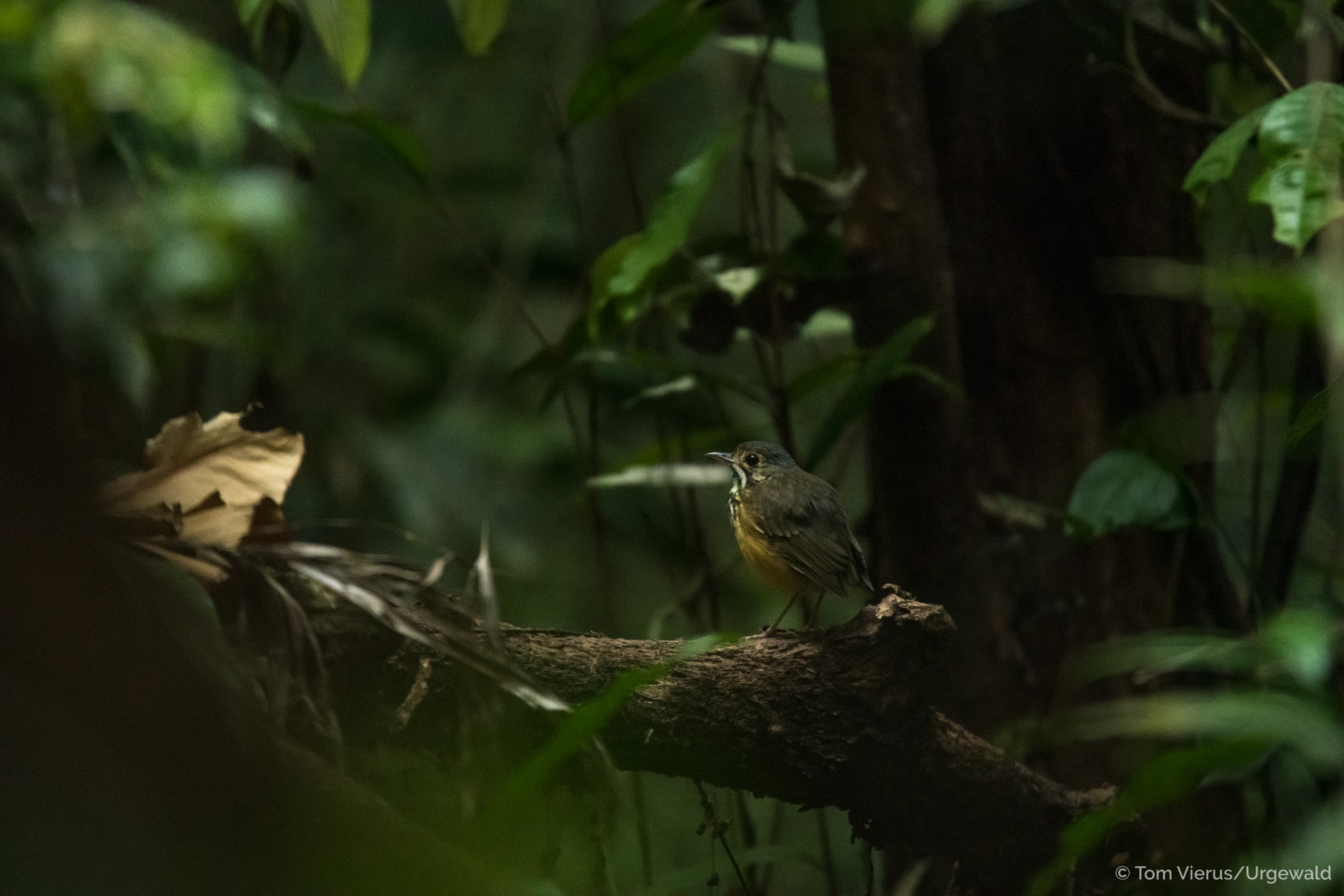 The rarely seen Spotted Antpitta (Hylopezus macularius) sitting on a tree trunk in the Iwokrama Forest in Guyana. 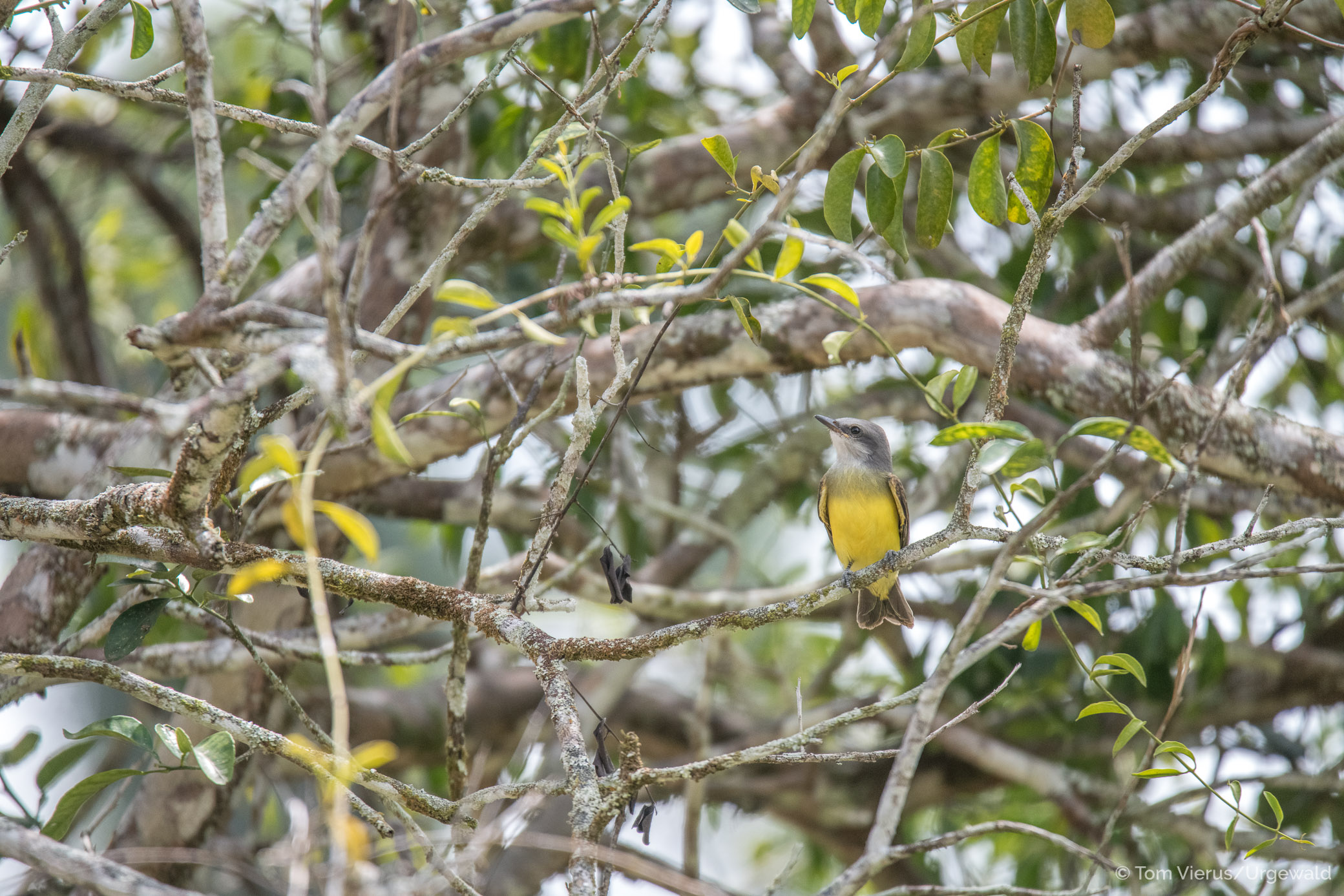 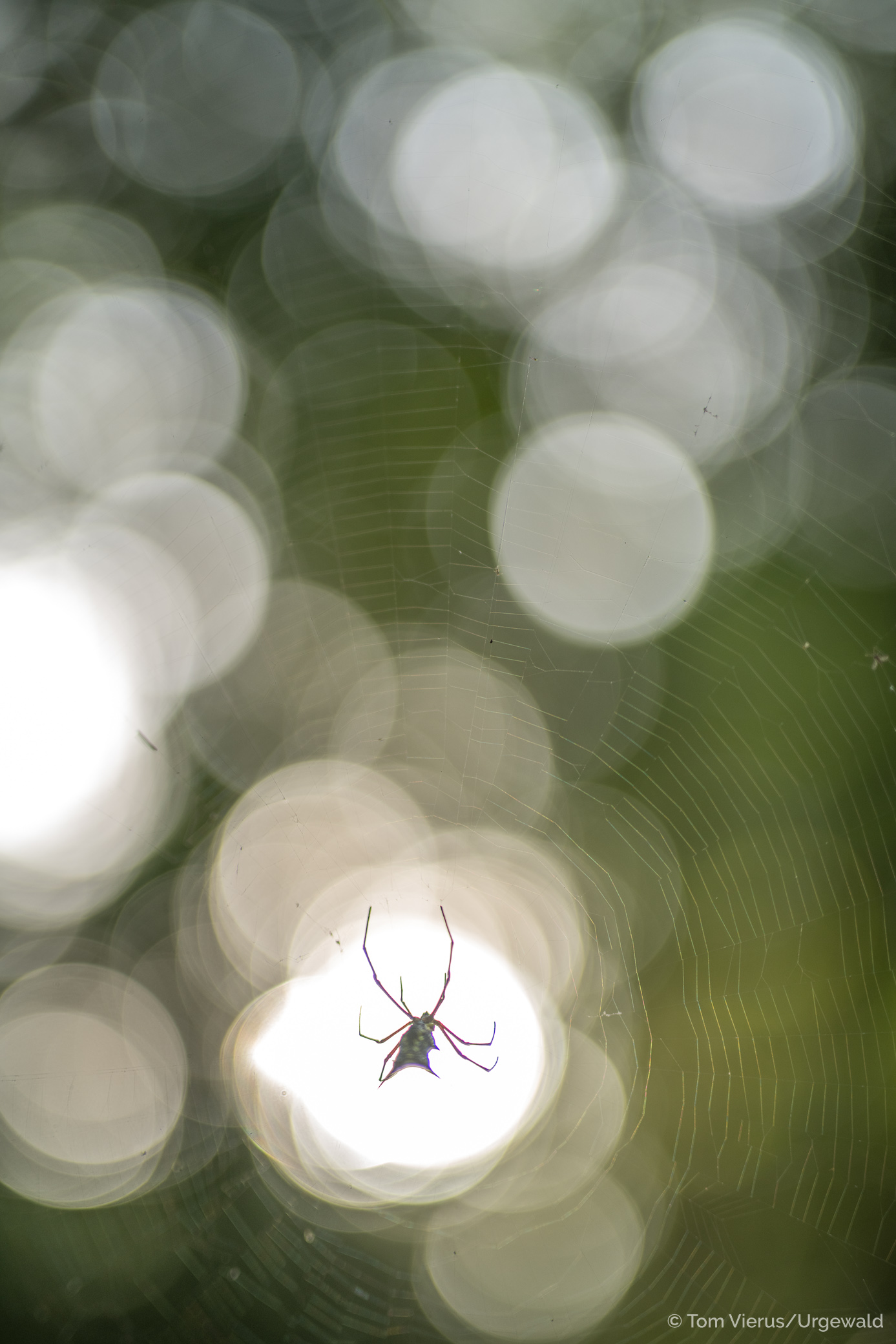 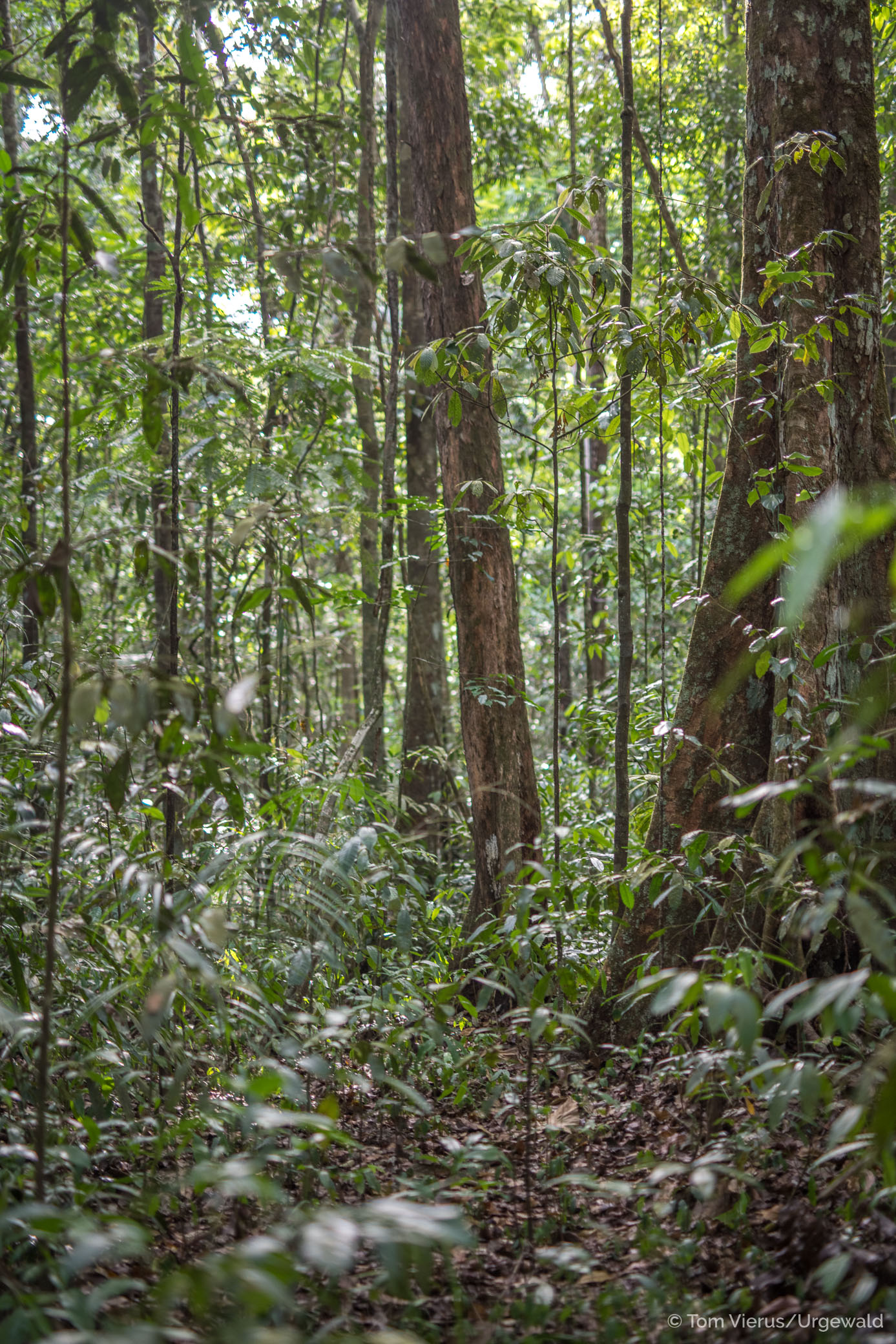 The dense and fertile Iwokrama forest in Guyana’s interior.

Black caiman at the doorstep

The Iwokrama lodge is situated right at the majestic Essequibo river, Guyana’s largest river stretching for over a 1000km before reaching the Atlantic ocean. While exploring the lodge grounds I went down to the jetty and to my surprise spotted a large black caiman (Melanosuchus niger) motionless resting on the water surface. I took the chance to record some footage and take images, who knows when a chance like this arises again! Later they told us that he tends to hang around at the lodge and indeed we did see him again but it didn’t make this animal any less impressive! These large crocodilians can possibly reach up to 6m (!). 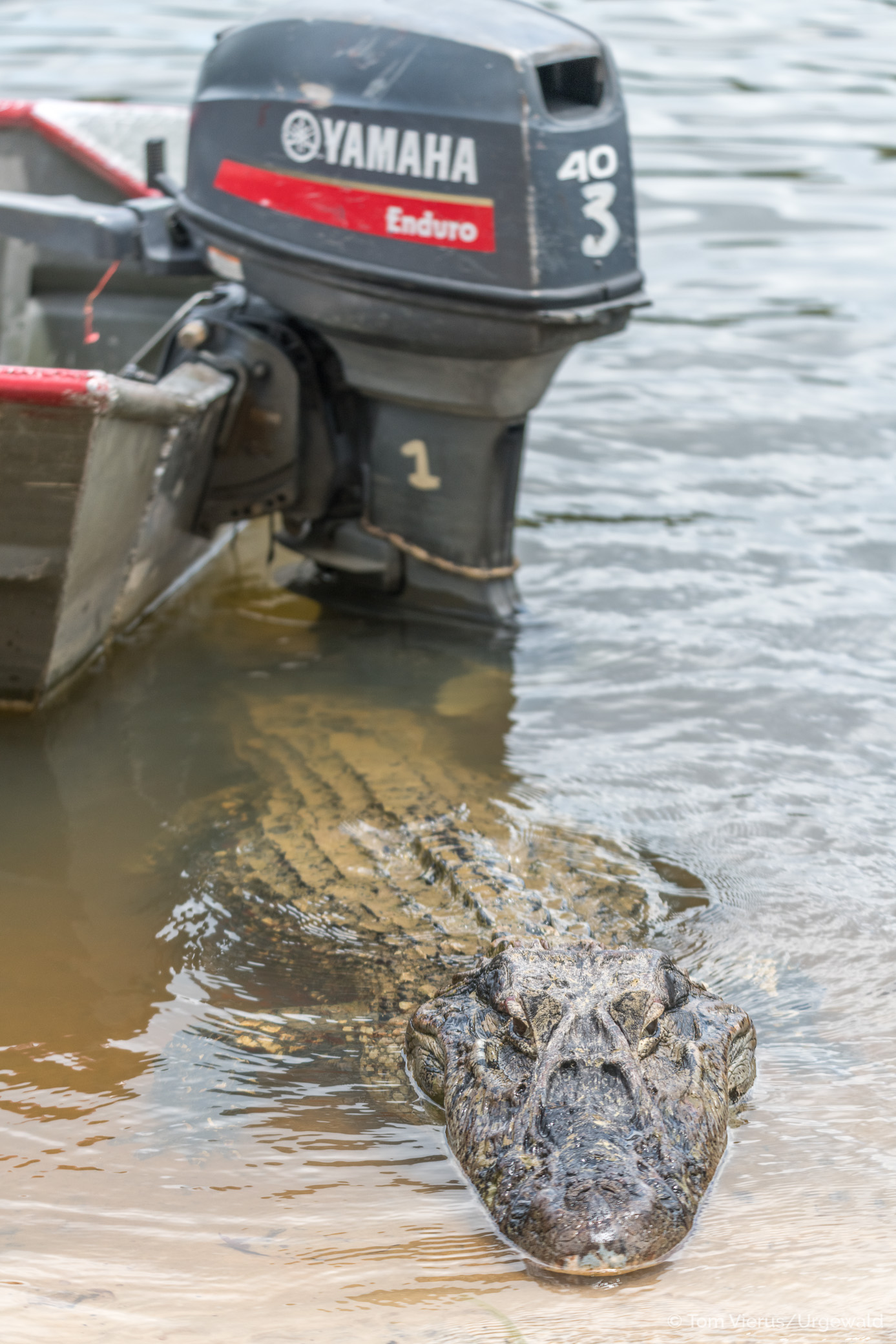 A black caiman in the Essequibo River. Iwokrama Lodge, Guyana. 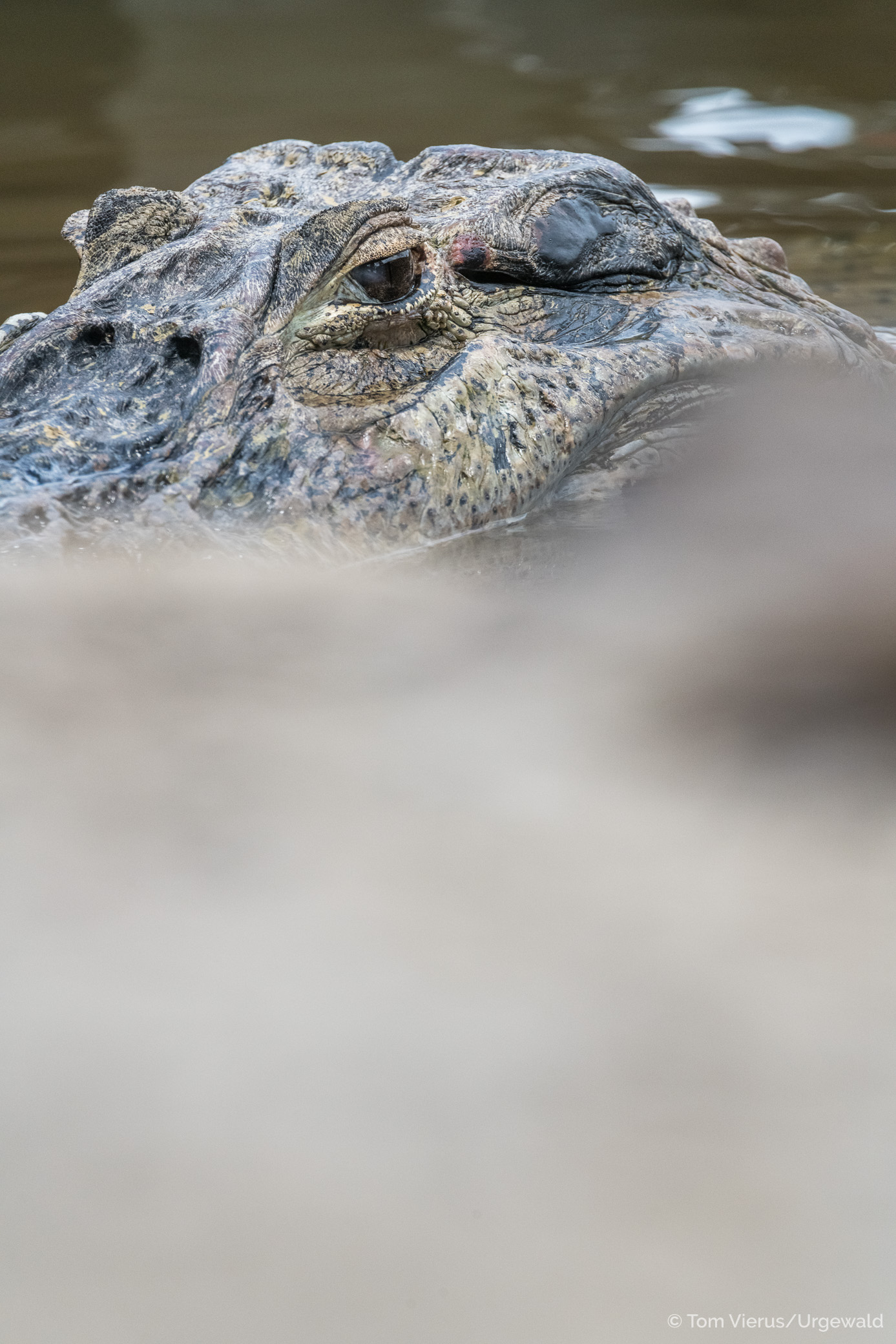 A black caiman lurking out the Essequibo river. 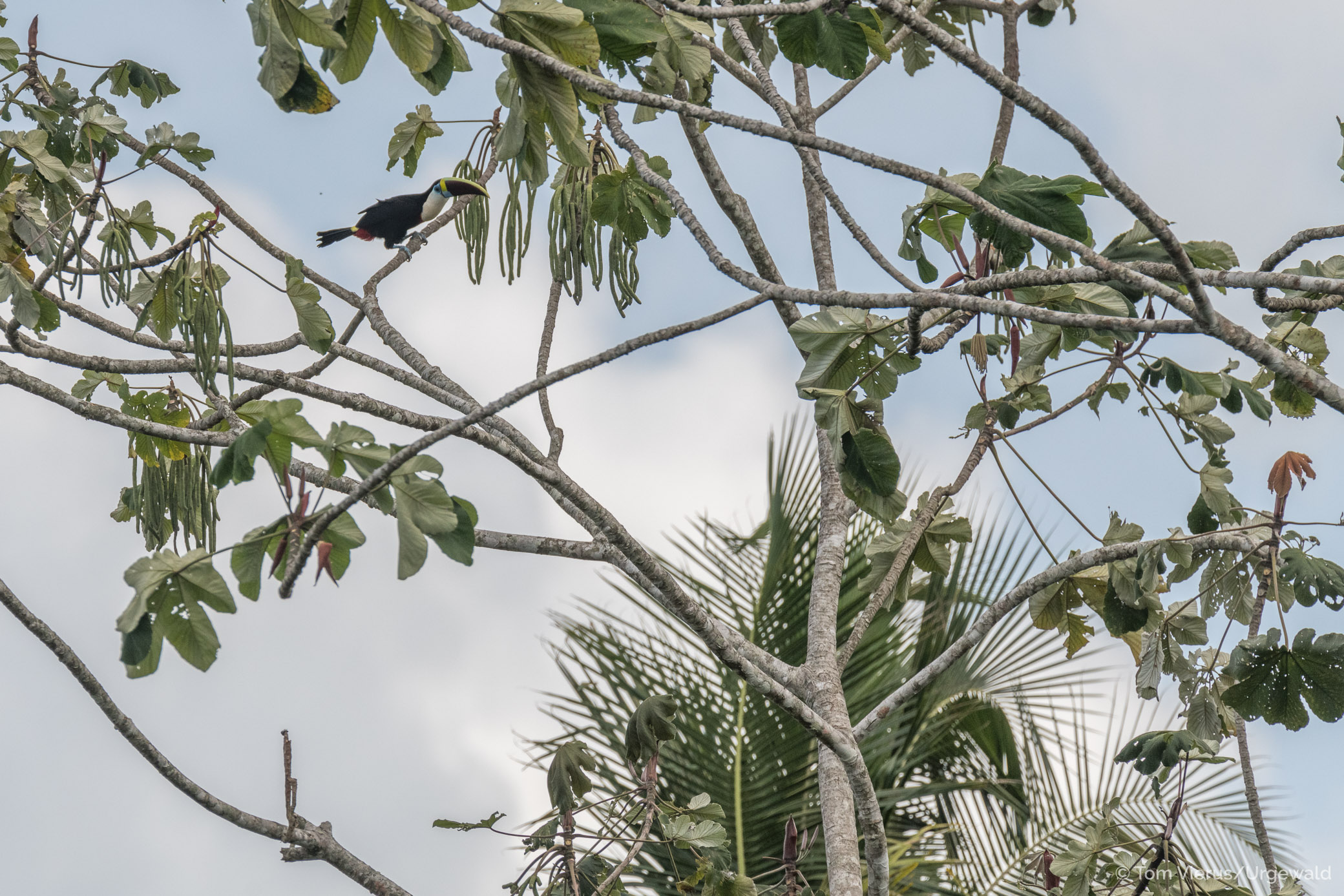 A white-throated toucan (Ramphastos tucanus) photographed in the Iwokrama forest in Guyana. 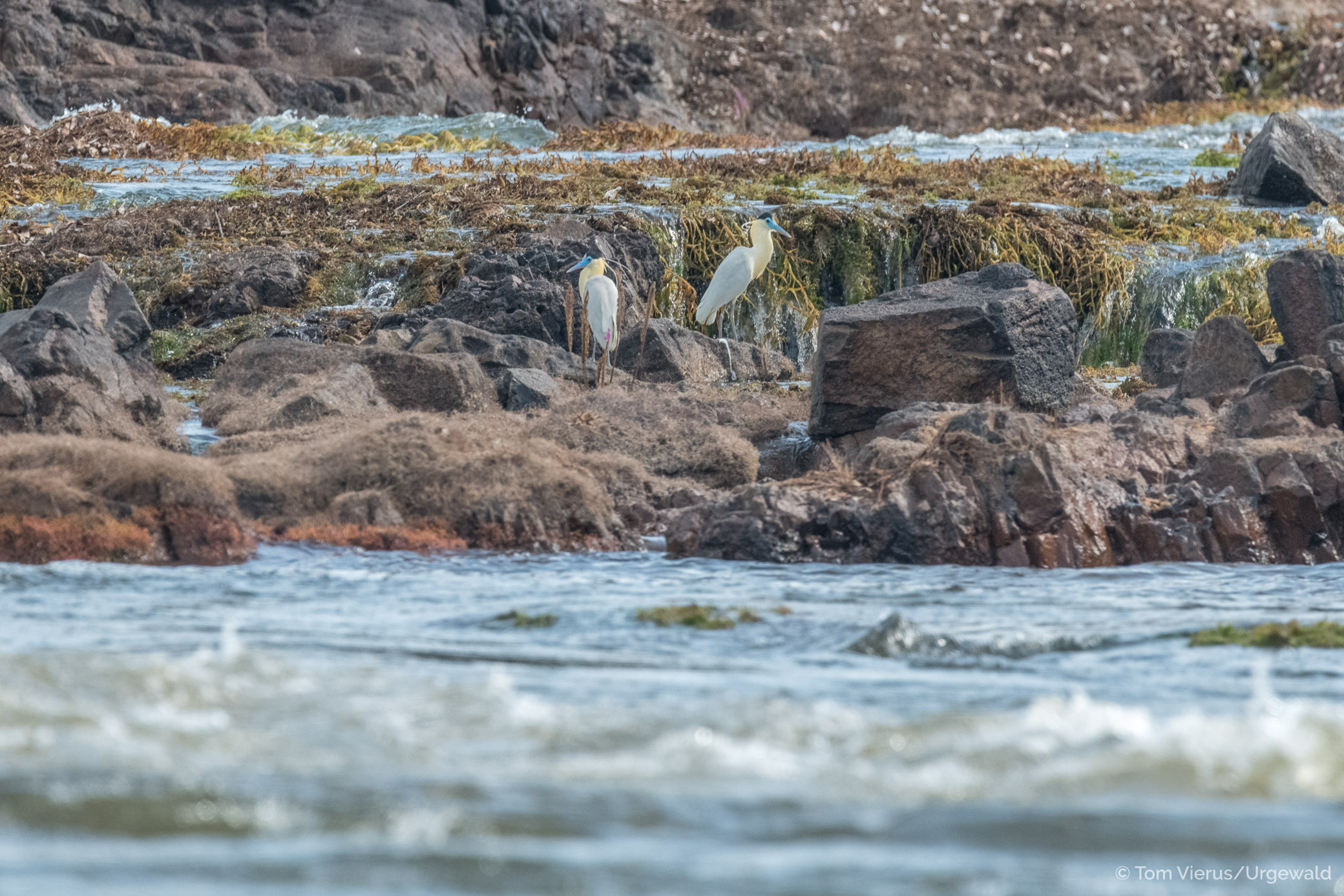 Two capped herons (Pilherodius pileatus) forage on rapids of the Essequibo river in the Iwokrama Forest in Guyana.

After a boat trip on the Essequibo river spotting toucans, ospreys, blue-winged macaws, and several water-related birds and the rainforest walk the night was falling. The lodge food was amazing and always plenty of vegan options available. Generally, I found eating vegan in Guyana was rather easy with several local dishes that are naturally vegan and readily available. I have definitely been to countries in which following a vegan diet was much more challenging. A Banks later (the local beer) I had to transfer my photos and images of the days onto my computer, charge all batteries and prepare the camera bag for an early start in the morning. The plan was to meet for coffee at 5 am and leave before six to climb turtle mountain, about 30 minutes by boat downstream..

To be continued in the next part! 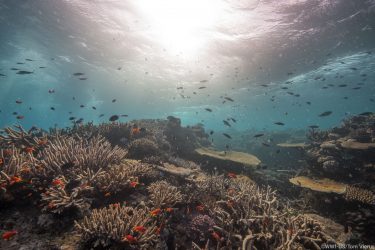 While being in Vanuatu in early 2019 I got an interesting email from the US office of the World Wildlife Fund asking about...