Mid of November I spent eight days on Helgoland, Germany’s only real high seas island, around 46km offshore the German mainland. I was there as part of the ISATEC cohort of 2014, studying the local aquatic flora and fauna and learning more about their ecological importance. Part of our trip was a visit to the Dune, a small island just next to and belonging to Helgoland. Here, populations of two seal species are found and can be observed. I couldn’t wait for this opportunity, both concerning the photography  well as biological side of it and was extremely happy as we finally put foot on the dune. 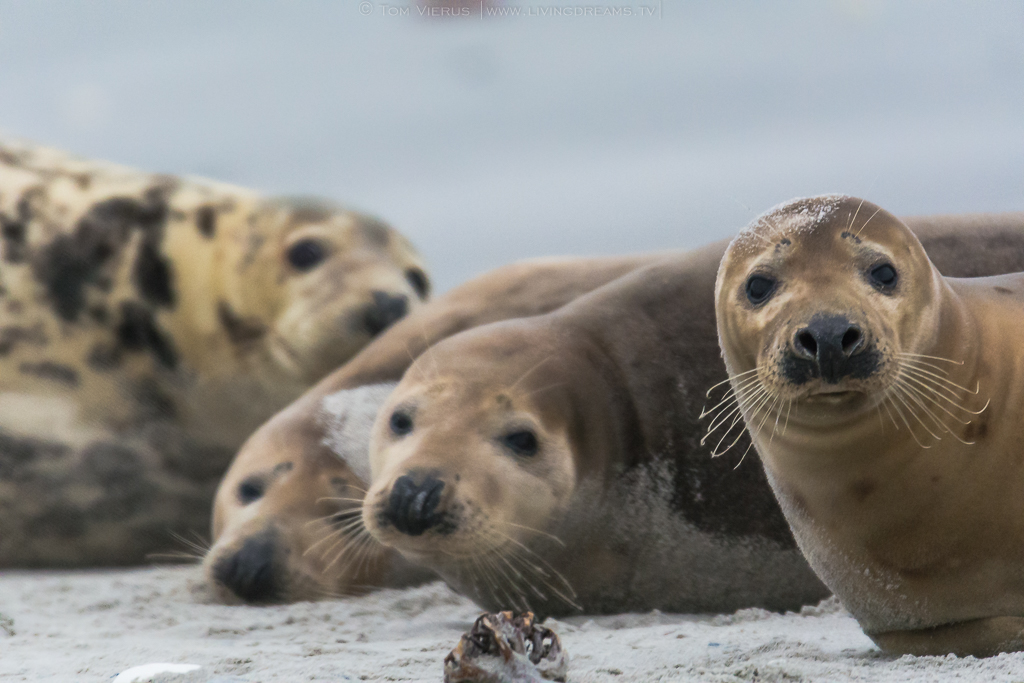 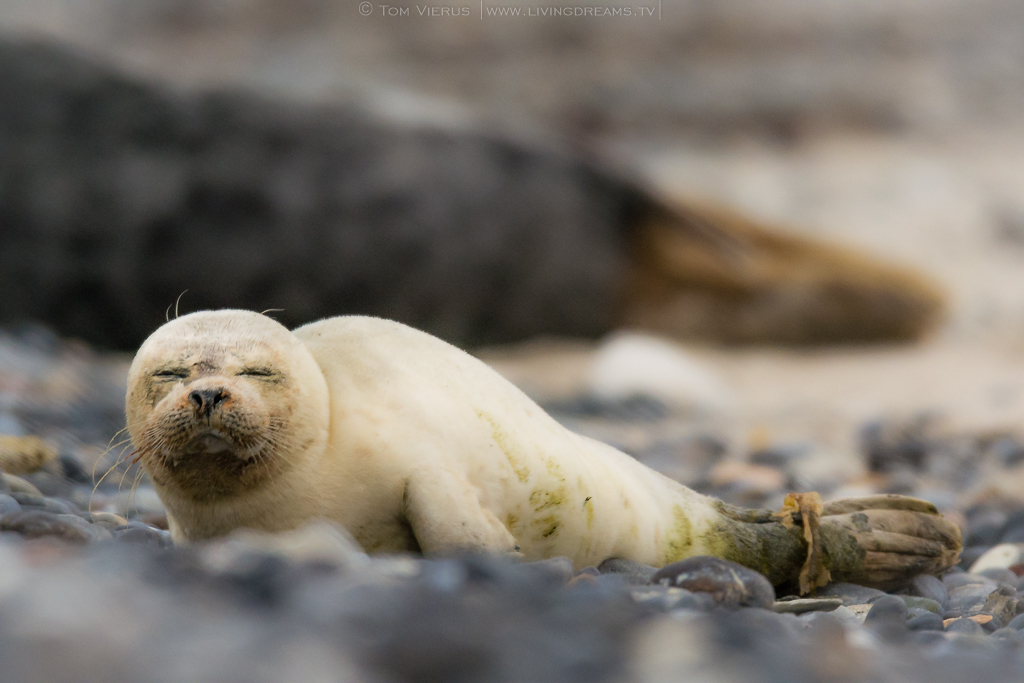 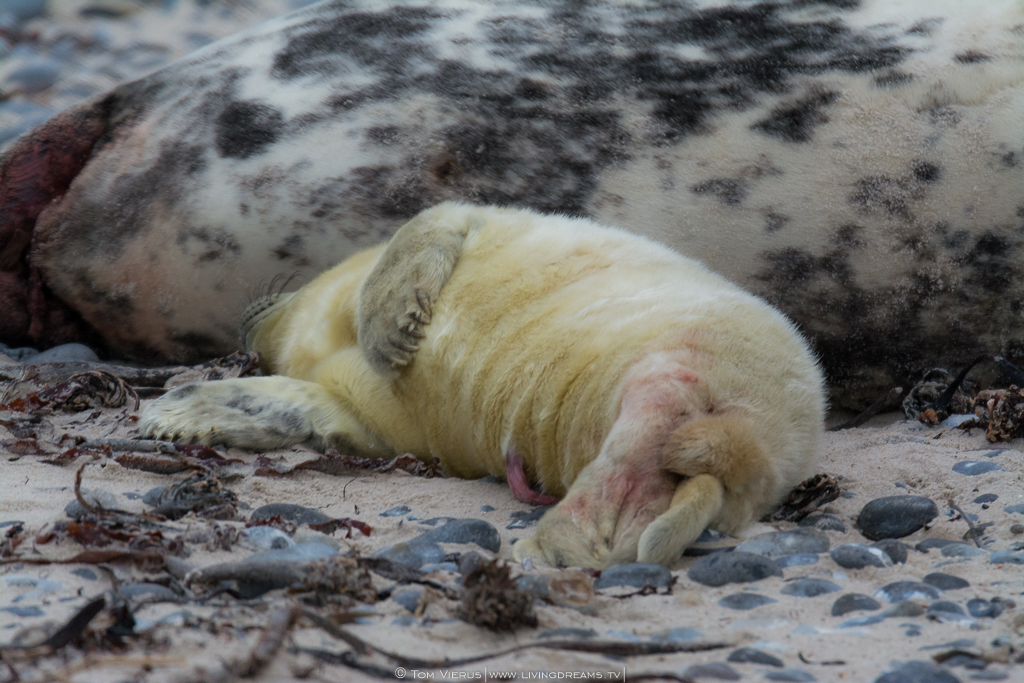 This little pup seemed to be newly born – the umbilical cord still attached. Both mom and pup were very tired and exhausted. Also note the bloody back part of the female seal. 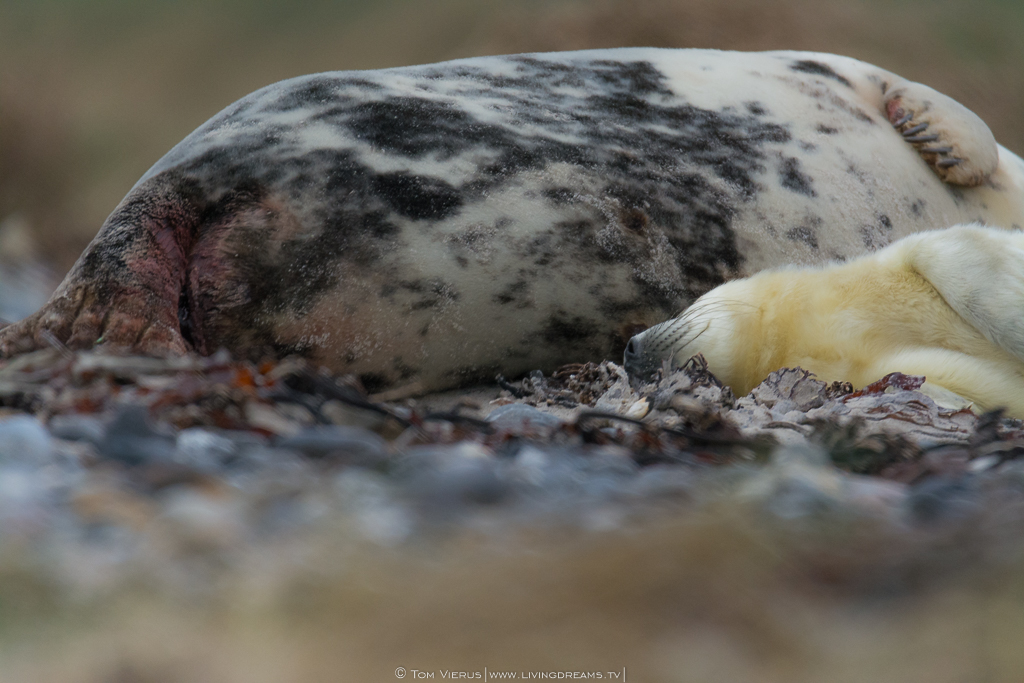 Just as we got off the ferry after a ten minutes ride through bumpy seas we found a couple of individuals hauling out on the beach. Hauling describes the behavior of seals coming onshore to rest and give birth to their youngs. There are two groups of seals than can be found here:

Both might look quite similar but a couple of distinctive features enable us to distinguish them quite clearly: the grey seals grow larger with bulls reaching up to a little more than 3 m and weighing over 300 kg in the eastern Atlantic, whereas common seals only reach around 1.85 m and weigh up to 170 kg. Grey seals exhibit a straight head profile and nostrils (nose holes) being well apart, whereas common seals exhibit distinctive v-shaped nostrils and a rather concave head profile concerning their snouts.

A group of seals hauling omshore on the “dune”.

Common seals vary in their color from brownish and black to tan or grey. Their heads are rather round and as all other true seals (pinnipeda) their lack earflaps (pinna) meaning their ear canal can be seen behind their eyes.

Common seals are considered ‘Least Concern’ by the IUCN with an estimated population size of 350.000 – 500.000 (Thompson & Härkönen 2008). They usually feed on fish such as sea bass, anchovy and cod as well as some crustaceans, mollusks and squids. They have been observed to dive as deep as 500 m – an incredible depth if you think about it! They may spend several days at sea and have been seen 50 km offshore, though they tend to stay close to shore where they find resting opportunities and give birth to their youngs. Courthsip and mating happens underwater and thus is scarcely observed. Seal pups are born well developed and are able to swim and dive within hours. As they are mammals just like us, female common seals provide their youngs with their fatty milk for around three to four weeks during which the weight of the pups may double! Pretty impressive, isn’t it? 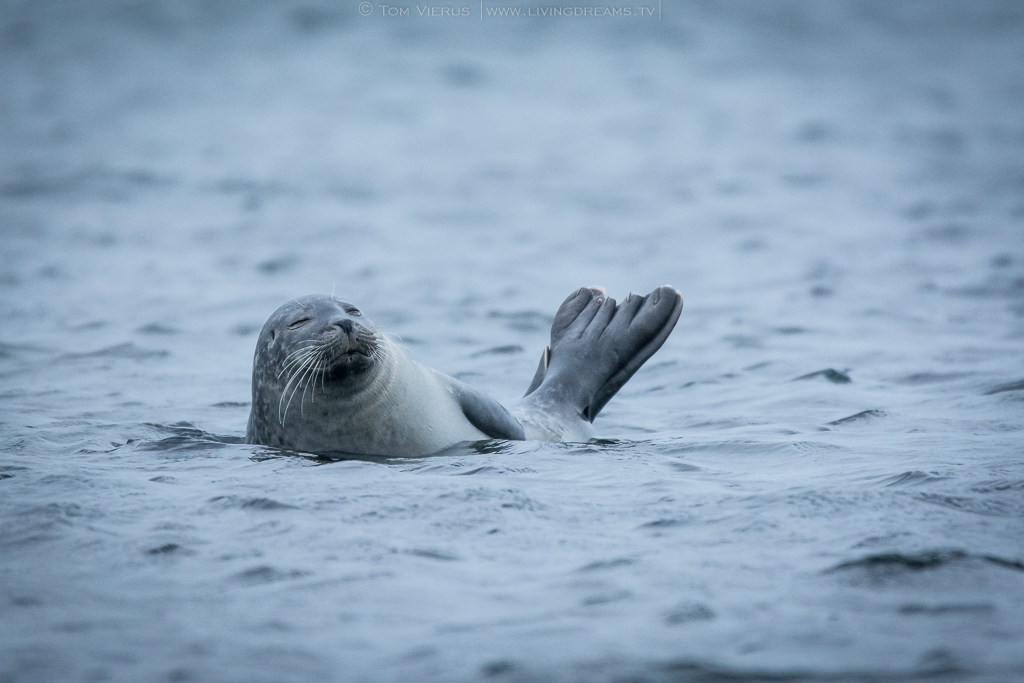 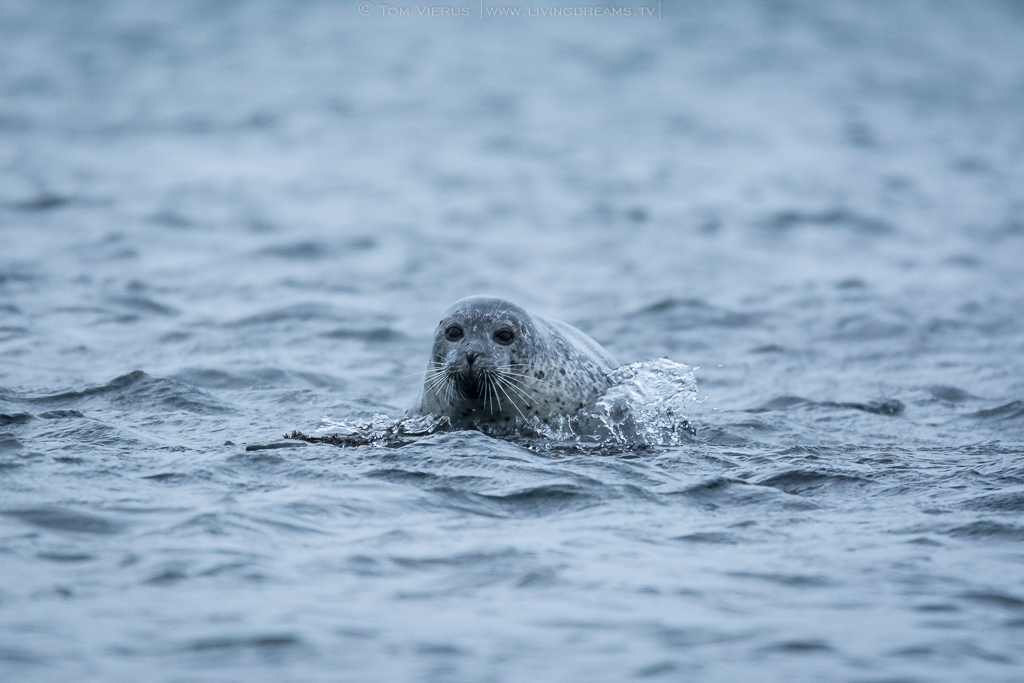 Grey seals grow way larger than their relatives and are found in the North Atlantic ocean. As mentioned before they may weigh up to 300 kg in the eastern Atlantic with males of the western Atlantic population even reaching weights of up to 400 kg! Grey seals breed in colonies of up to several thousand animals. Just like their relatives the harbor seals, they feed on fish and crustaceans but are highly opportunistic as recorded attacks of seabirds have shown.

In several countries hunting of grey seals is illegal and their worldwide population is generally on the rise. Estimates of their life span reach from 26 up to 38 years. Their thick blubber isolates them in cold waters and enables them to survive in temperatures that would kill us humans within minutes. Just like their relative – the harbor seals -grey seals are considered as ‘Least Concern’ by the IUCN. 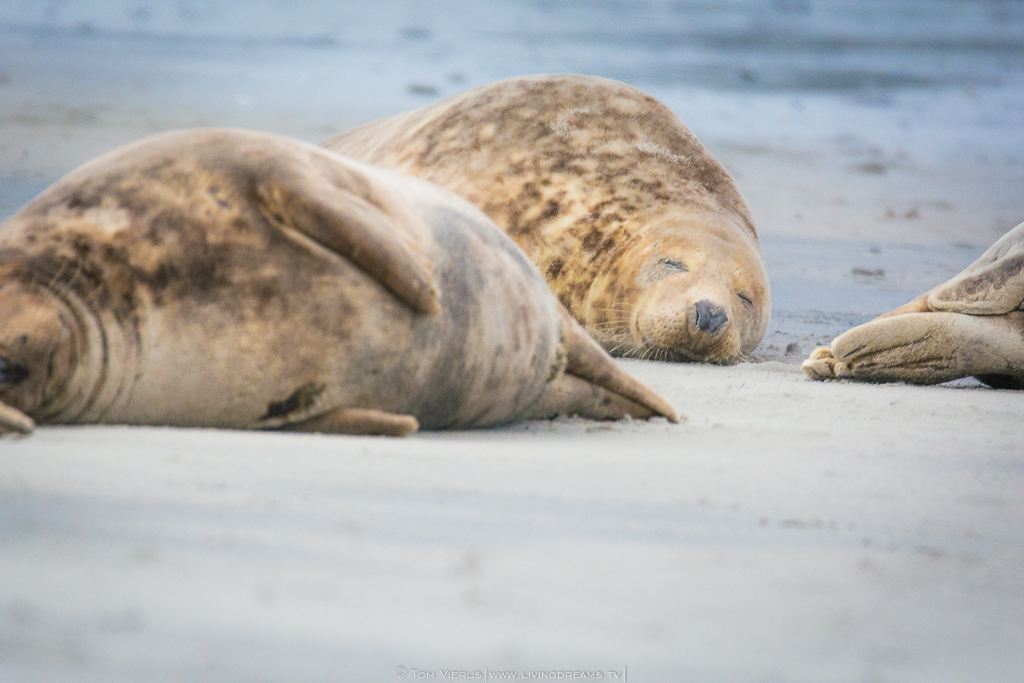 Lots of resting and sleeping onshore – what a life! 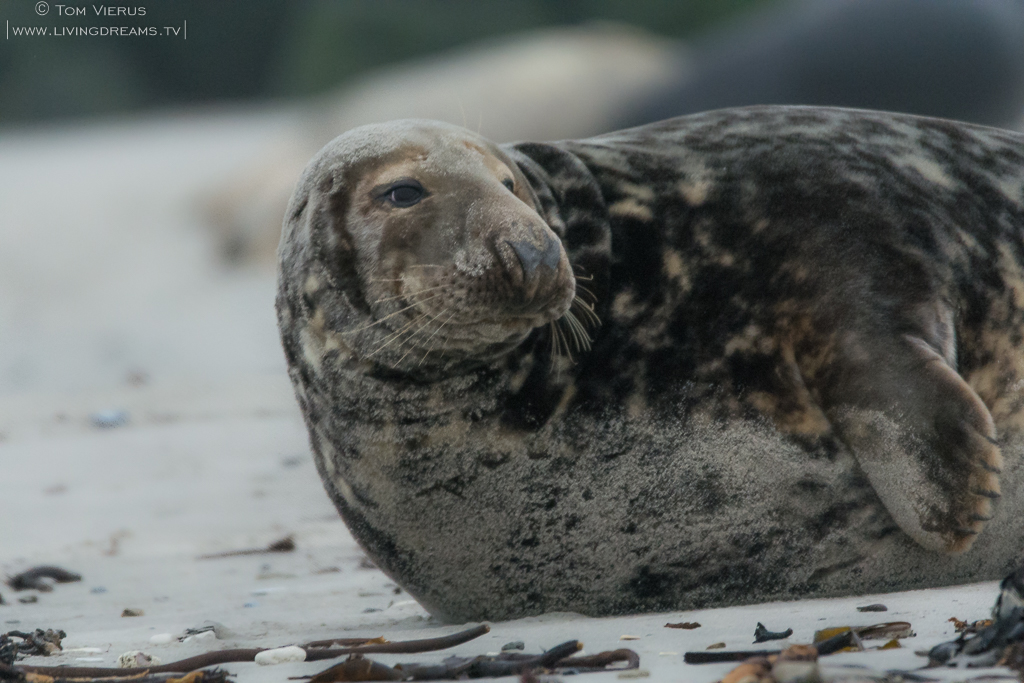 A big bull checking its surroundings 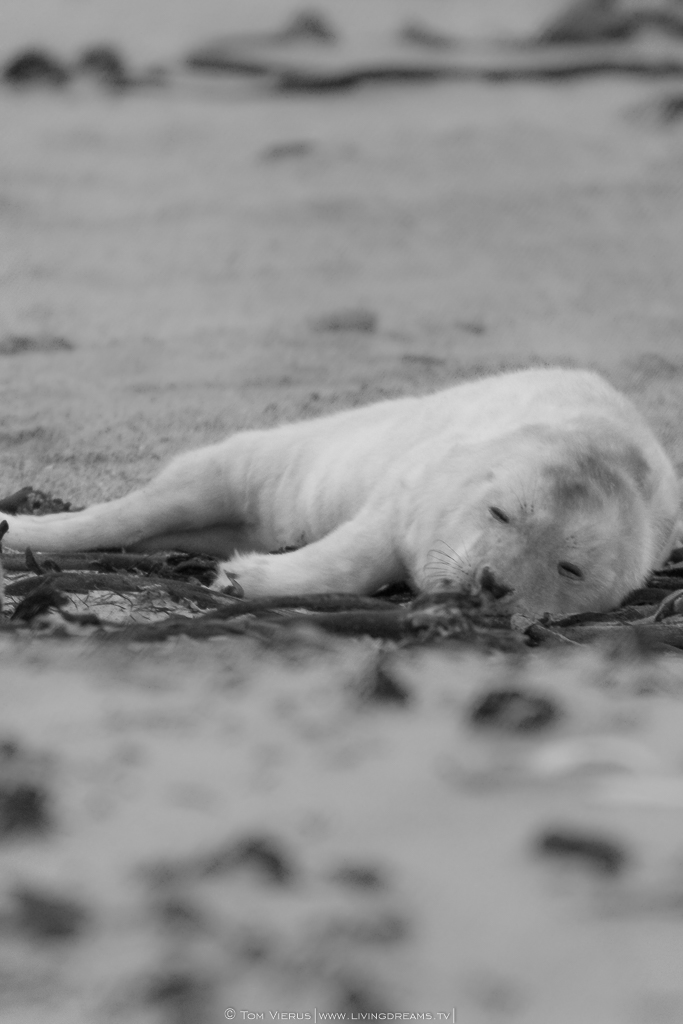 Although both seal species are not threatened in their existence, they do suffer from all kind of plastic debris and other anthropogenic induced ocean pollution. Old fishernets, fishing lines or the typical plastic holders for a sixpack of beers bear dangers to them and many animals eventually strangle themselves. You might have seen photos of seals “wearing” one of those things around their neck, cutting deep into their flesh as they grow in size – eventually it kills them. It is not a particular problem for seals, but a problem for any kind of animals inhabiting the ocean and paying the price of our unthoughtful littering. We are polluting our earth and especially our oceans with this never degrading material called plastic, that just breaks down into smaller and smaller particles called microplastic. There has yet to be found a solution for this ever increasing problem, but a good start for all of us is to reduce our plastic consumption as much as possible and to dispose it properly! On Helgoland I’ve seen many cormorants strangled in fishing nets and lines, material that they use to build their nests with these days. A unbelievable sad sight but it is the everyday scenario here.. The cliffs are covered with old dumped debris carefully collected by thousands of birds… 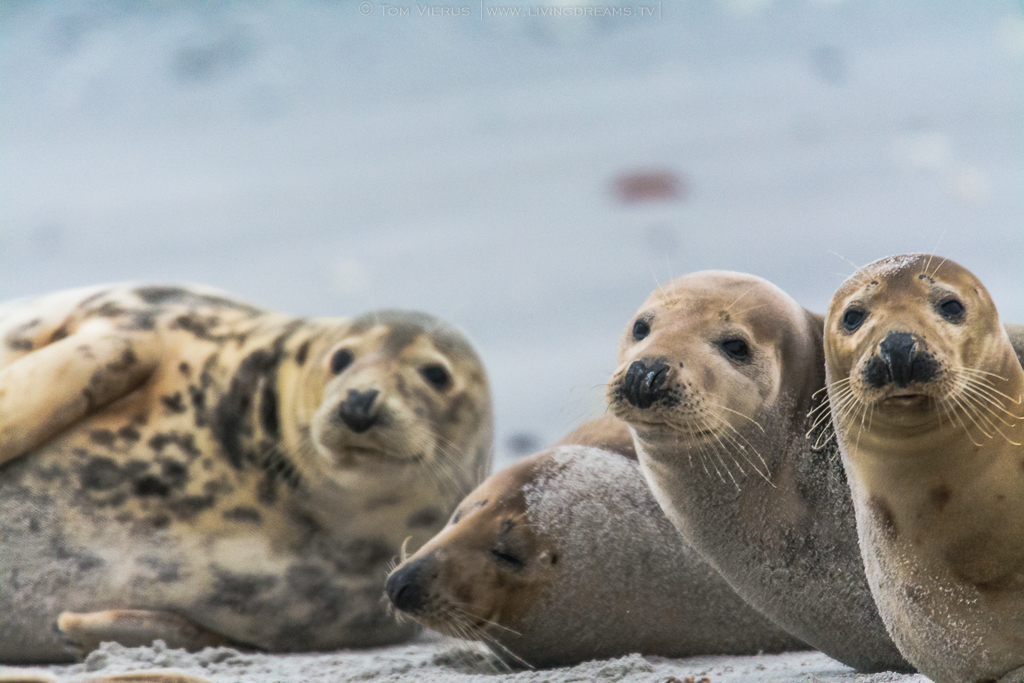 A group of seals curiously looking at that strange two footed beings walking around at the beach. 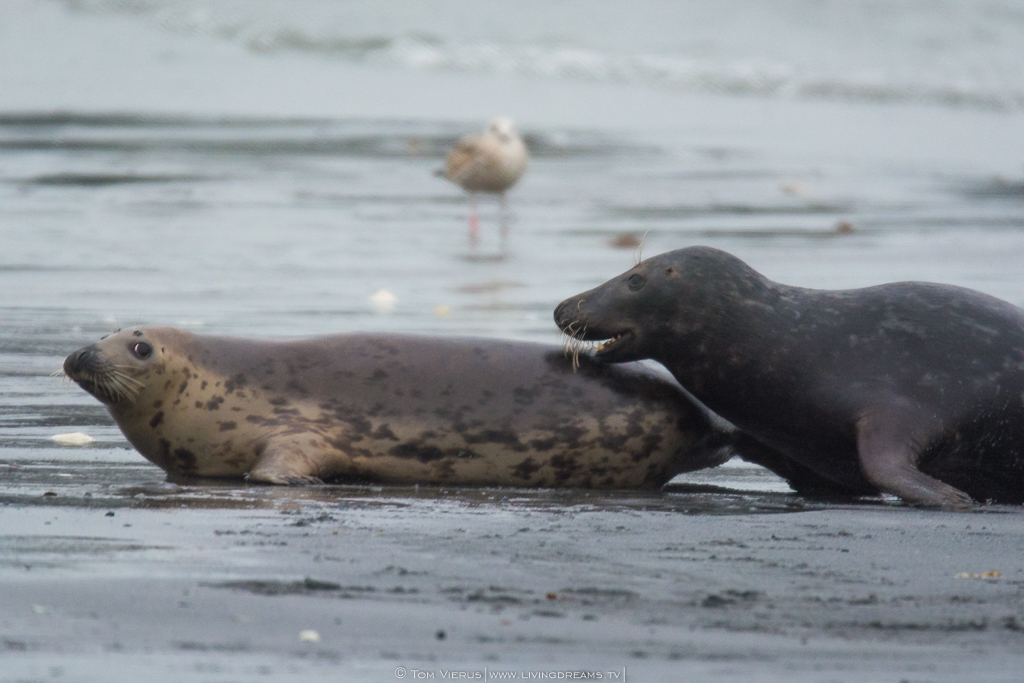 The little fellow on the right was just about to make love to the female on the left, who looks like she knows what´s going to happen. She managed to run away several times until both of them disappeared into the water and I lost track of them. 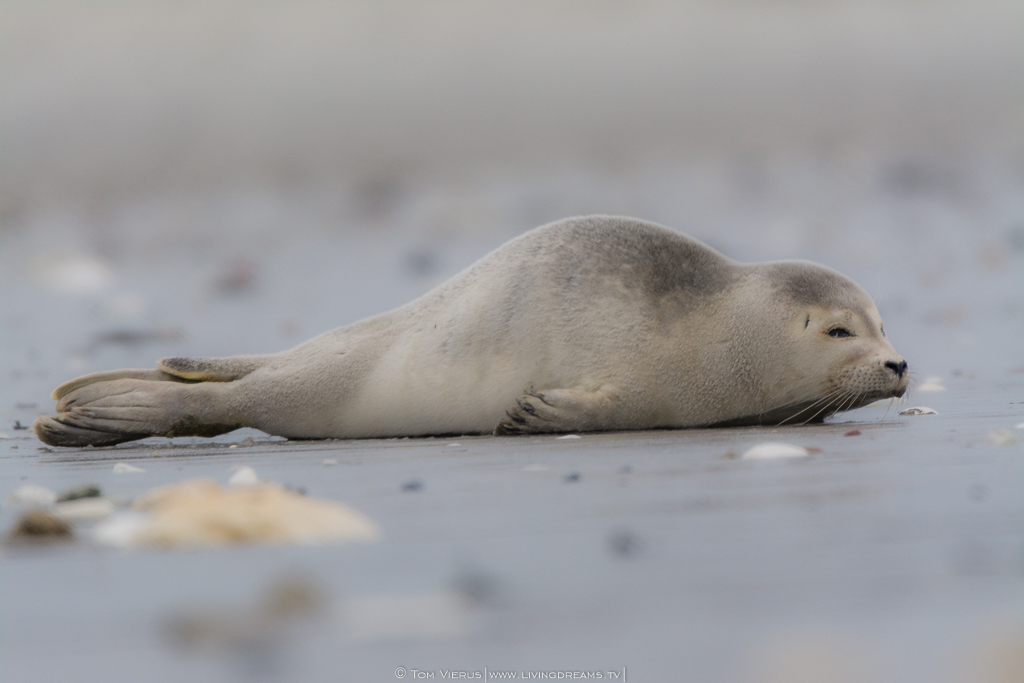 This little cute pup seemed abandoned by its mother. It was all by itself and we suggested it might be sick – the bloated back of it may indicate a lung disease, not uncommon among young seals. It was very weak and was breathing heavily, all factors supporting our theory. I hope it´s still alive and playing around the waters of Helgoland!

I see you don’t monetize your site, don’t waste your traffic, you can earn additional bucks
every month. You can use the best adsense alternative for any type of website (they
approve all websites), for more details simply search
in gooogle: boorfe’s tips monetize your website 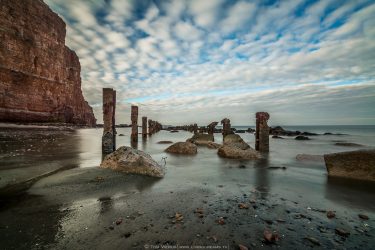 Lying around 46km north of the mainland Helgoland is the only high seas island of Germany. This rather majestic looking island...