Some of you might know that besides the environmental work I do, I also work for the tourism industry, creating content for resorts, hotels, dive centers, liveaboards, and tourism boards. Earlier this year I spend some time in Vanuatu and created a few short films for the promotion of the White Grass Ocean Resort & Spa on Tanna. The resort is run by an Austrian/Australian couple and is a wonderful base for the exploration of Tanna, an island nothing short of absolutely stunning.

I was able to visit the Mount Yasur, an active (!) volcano and I can tell you that this experience belongs to the top five I ever had in my life. There is just something almost spiritual and deeply humbling in standing at the rim of an active volcano, feeling the earth rumble, hearing the deep sounds and smelling the sulfur-filled air while watching lava being spit higher than our heads.. INSANE! And that is just one of the cool things to do here: there are many kustom (traditional) villages to be visited, among them the village where the movie Tanna was filmed, beautiful diving as you see in my film and other great stuff to do. 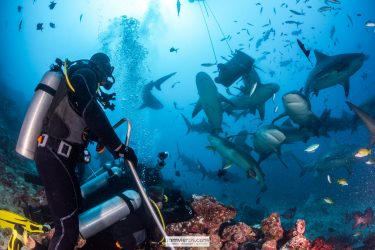 A few days ago I finished my last project: a short film about the My Fiji Shark Initiative by Beqa Adventure Divers (BAD)...