After having been able to dive a couple of times the professional team of Beqa Adventure Divers over the last six months and having had the chance to see bull sharks, grey reef sharks, blacktip reef sharks, whitetip reef sharks and from time to time sicklefin lemon sharks and tawny nurse sharks I have collected a great number of images. The sharkdiving of Fiji is world famous with close encounters and tons of shark action guaranteed! 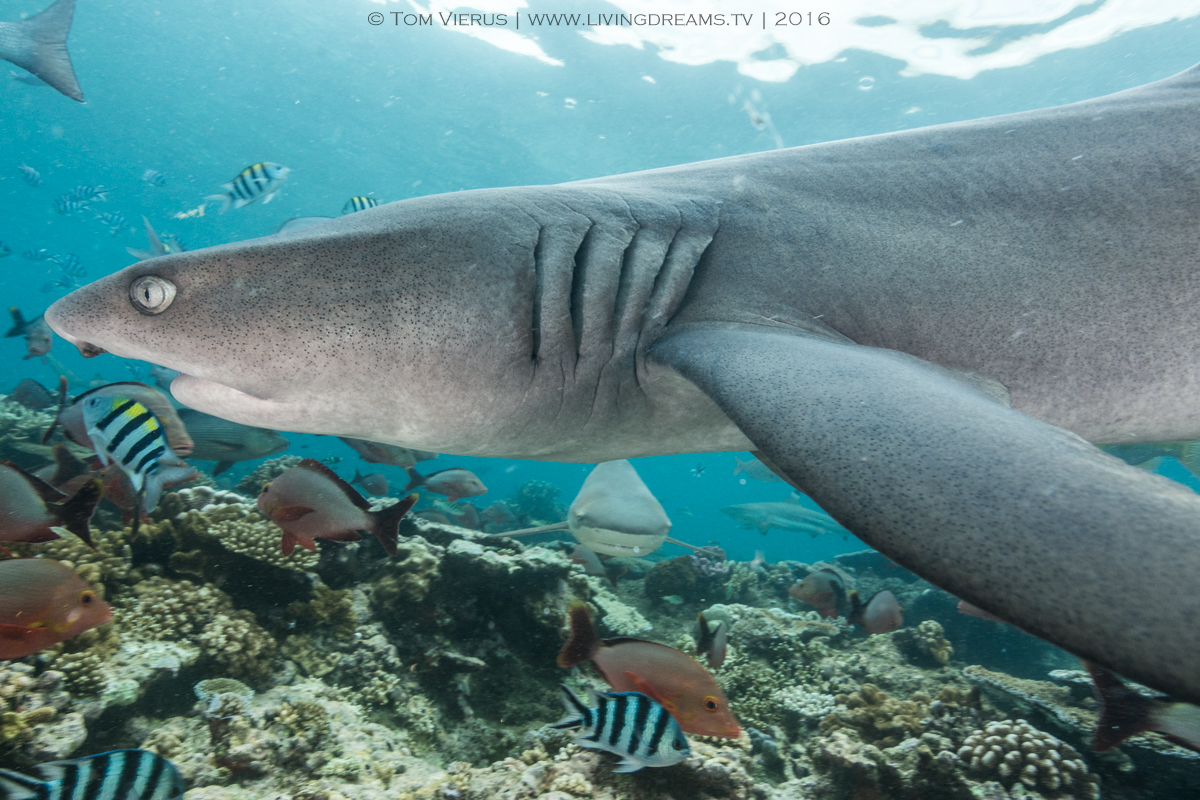 A whitetip reefie (Triaenodon obesus) with a lot of detail. 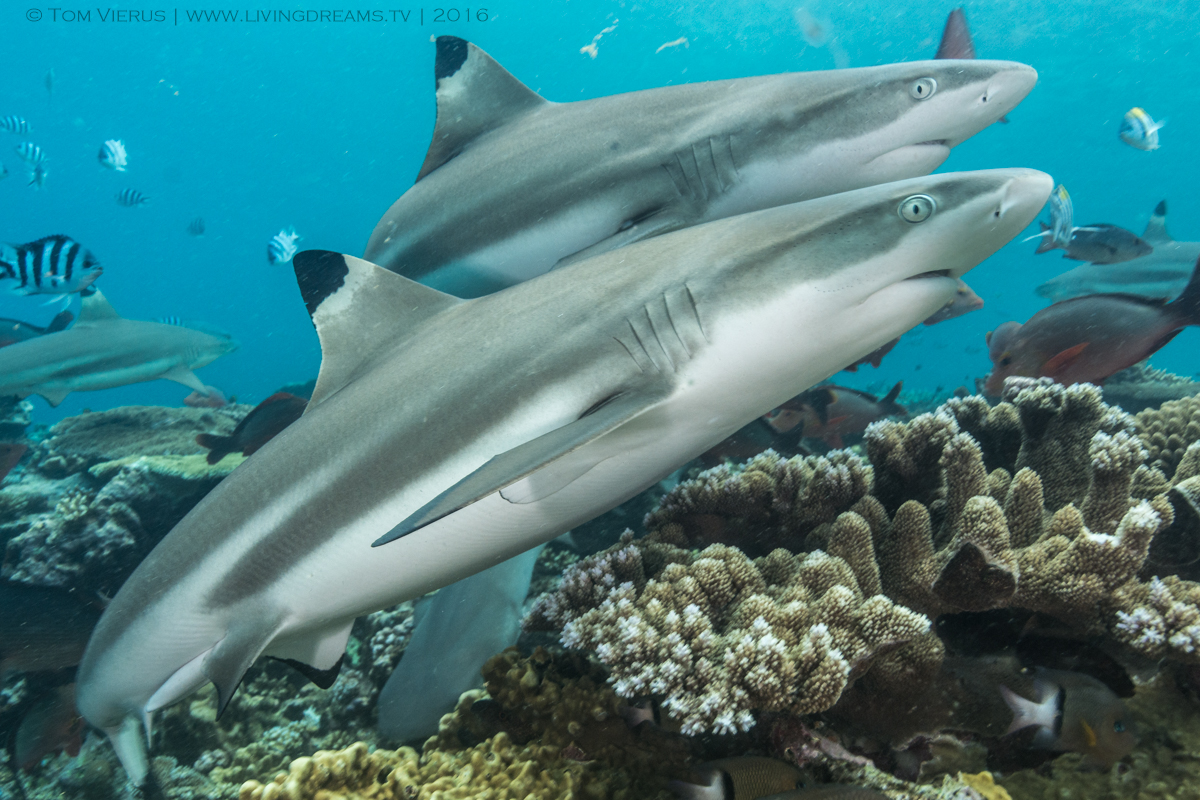 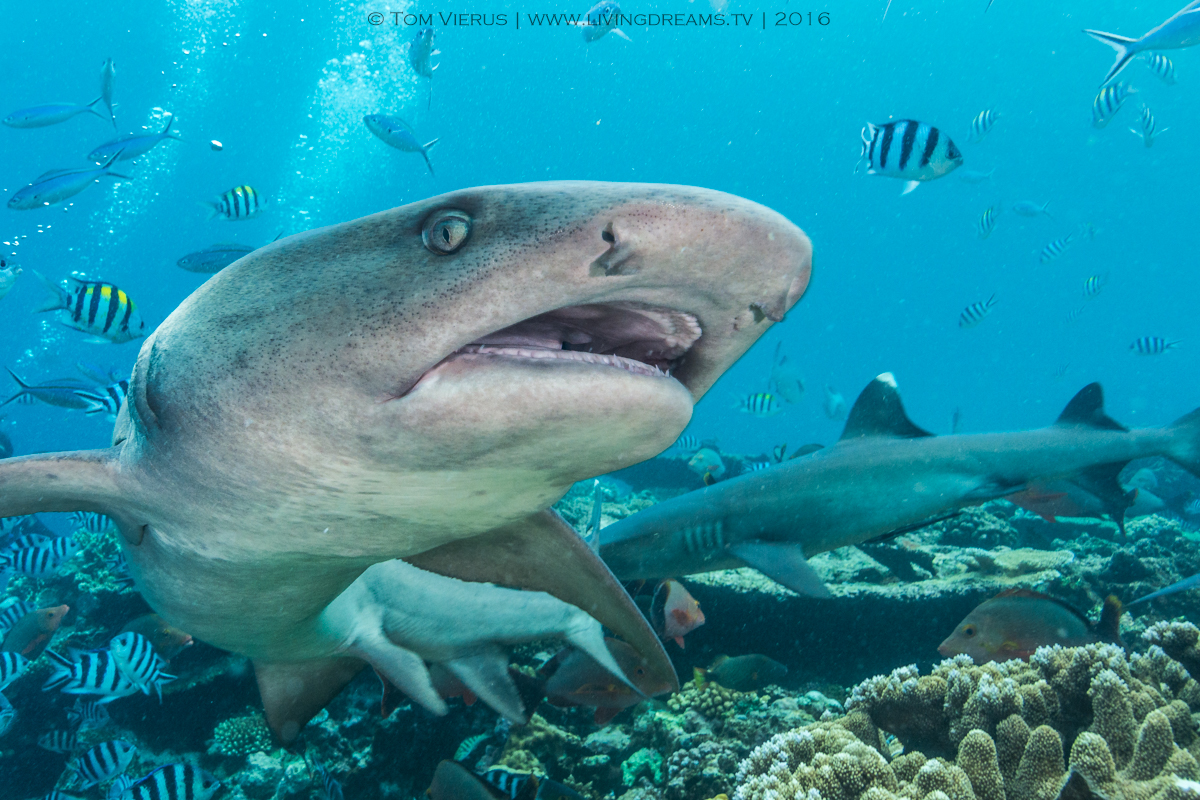 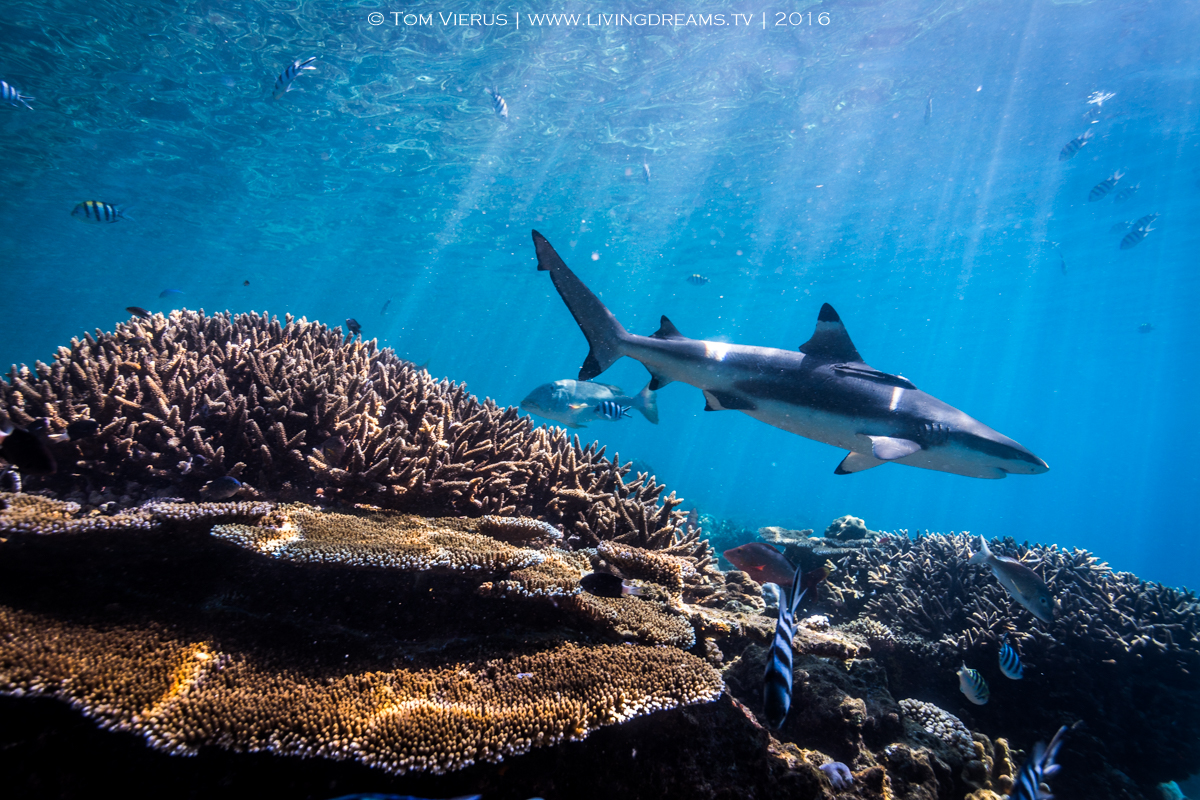 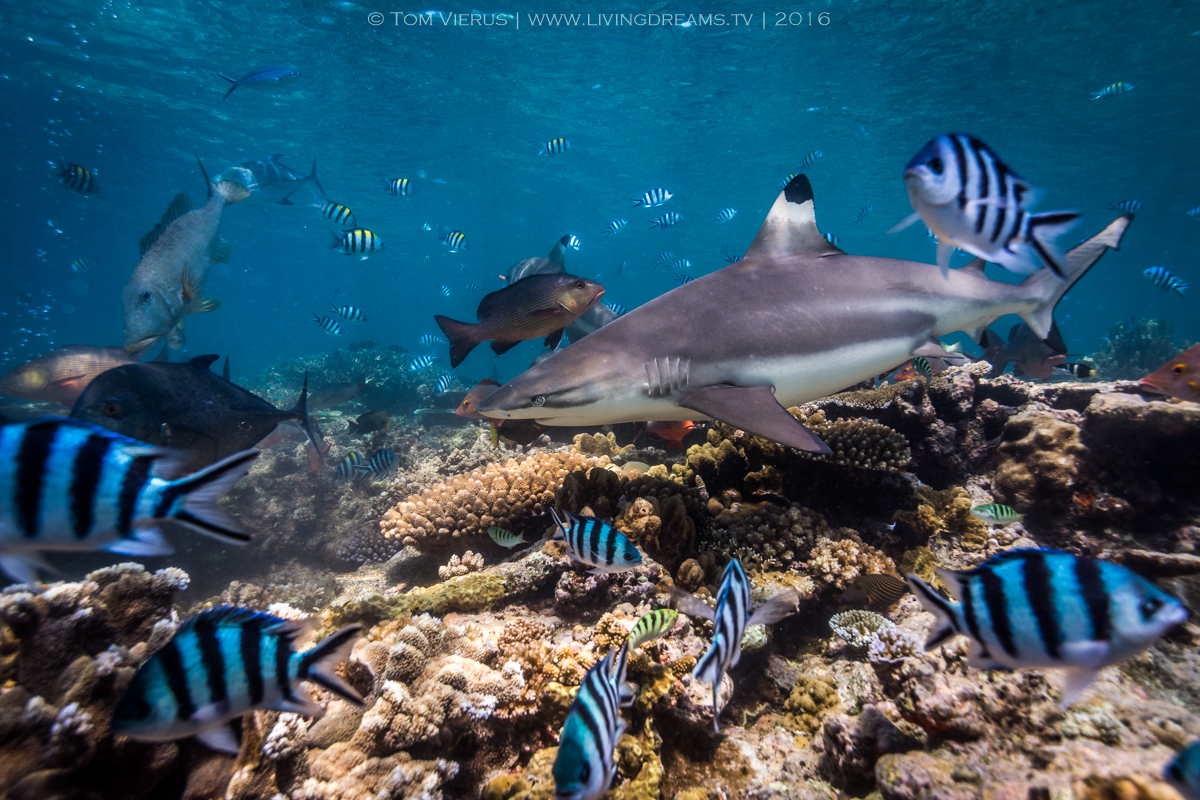 A blacktip cruising along the reef crest at around 5m.

I have written an article about how the dive is being conducted, so if you are keen on getting some more facts on the sharkdiving here in Fiji, please feel free to check it out.

Taking photos underwater can be a very challenging task as everyone with an underwater camera probably agrees on. For a great image, several conditions have to be met at the same time. The visibility shouldn’t be bad, the lightning has to match, meaning adjusting your strobes and the shark or the desired object to be portrayed has to be in the right spot. It is fairly common that one of these parameters isn’t quite right and the outcome far from what one expected. But of course, there is also a time where just everything seems to be right. 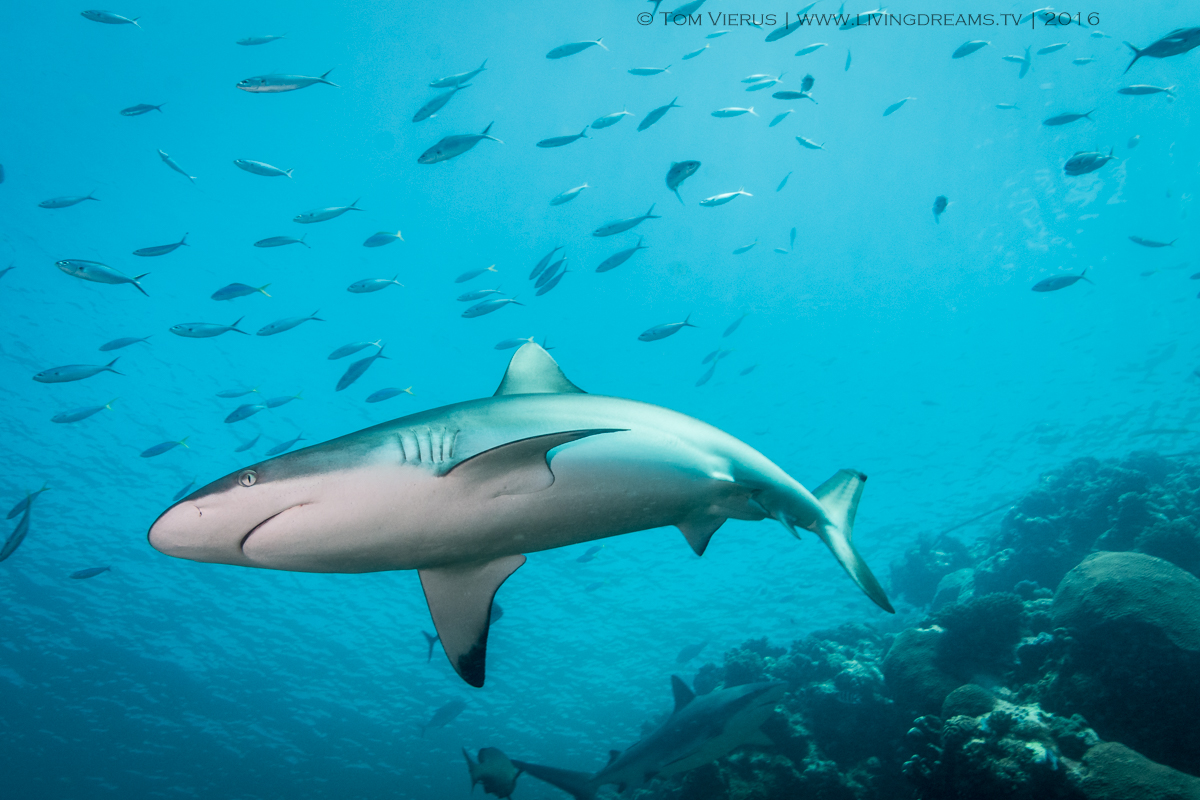 I had countless tries with the grey reefies. I find it very difficult to get decent shots of these very shy, hectic and agile sharks. 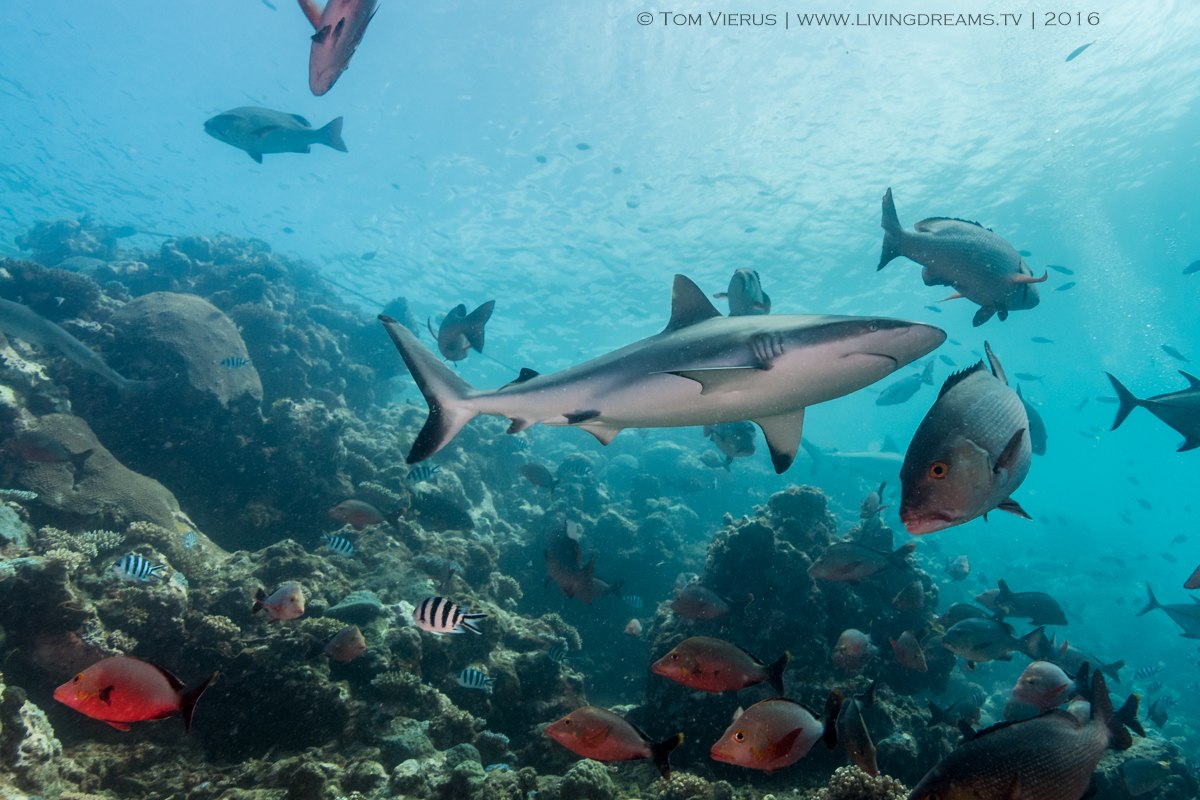 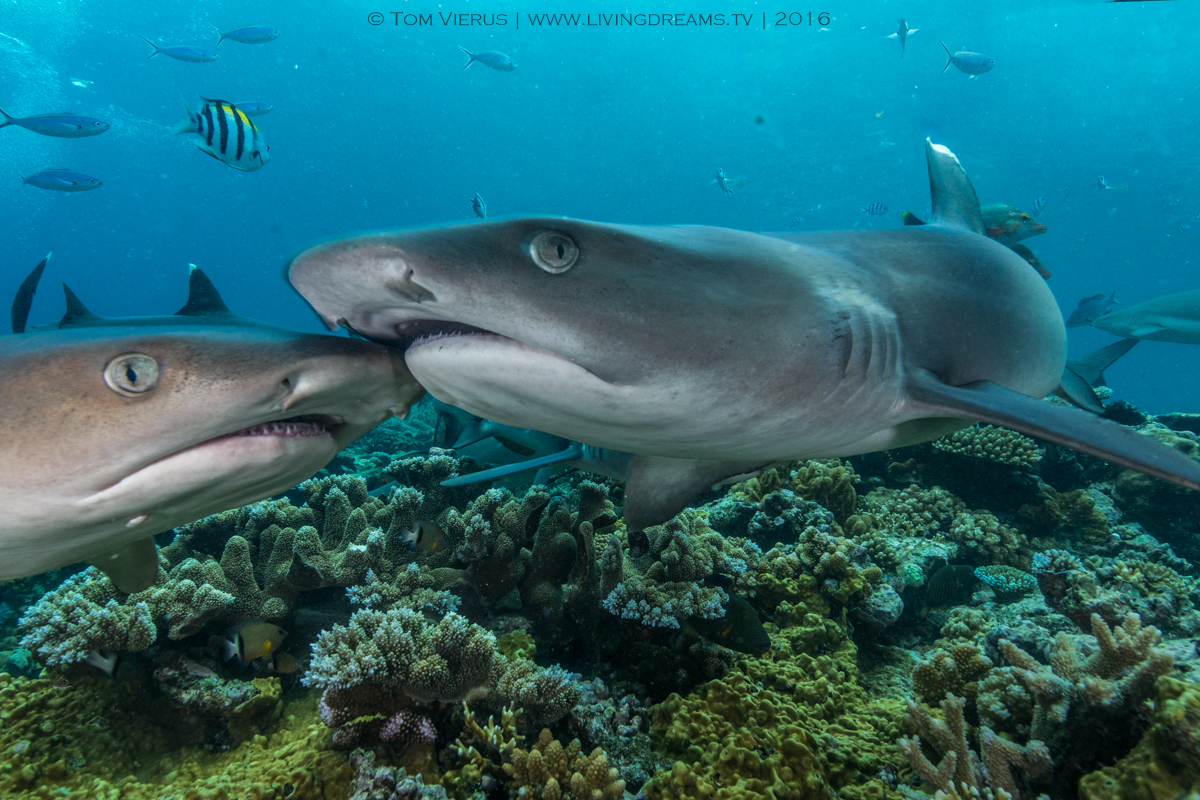 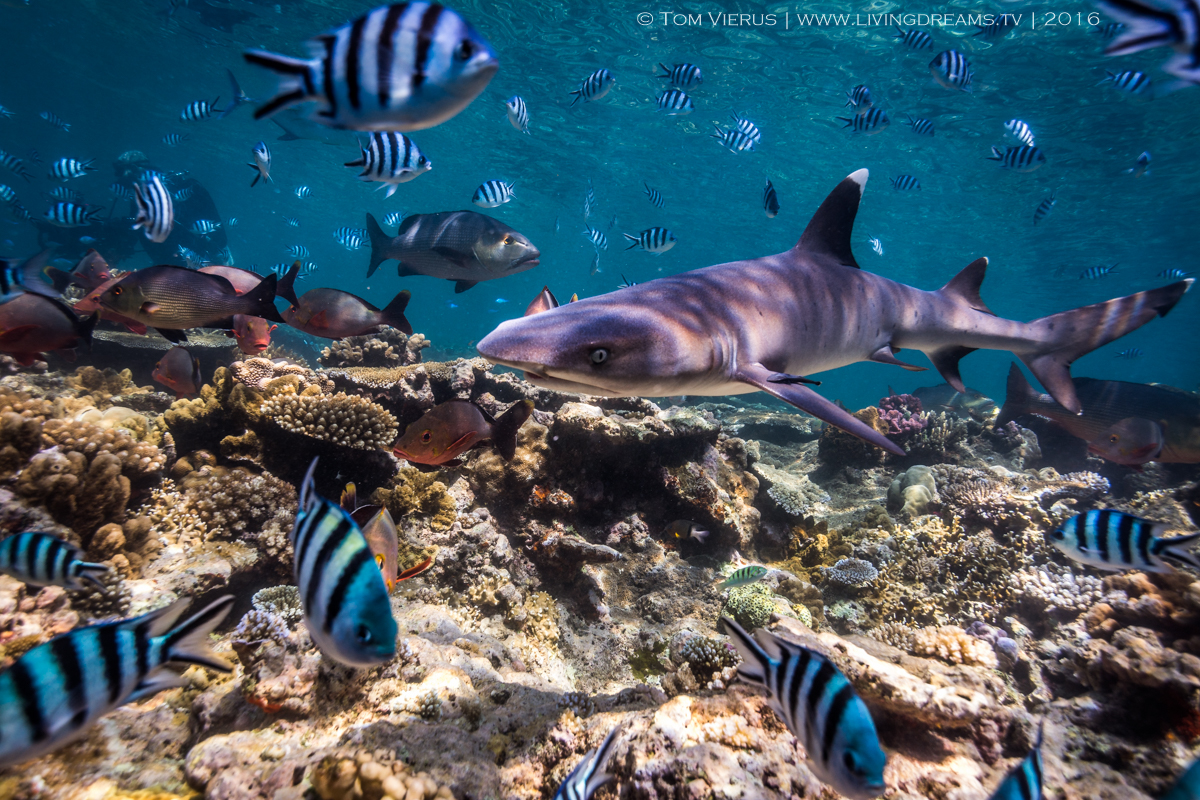 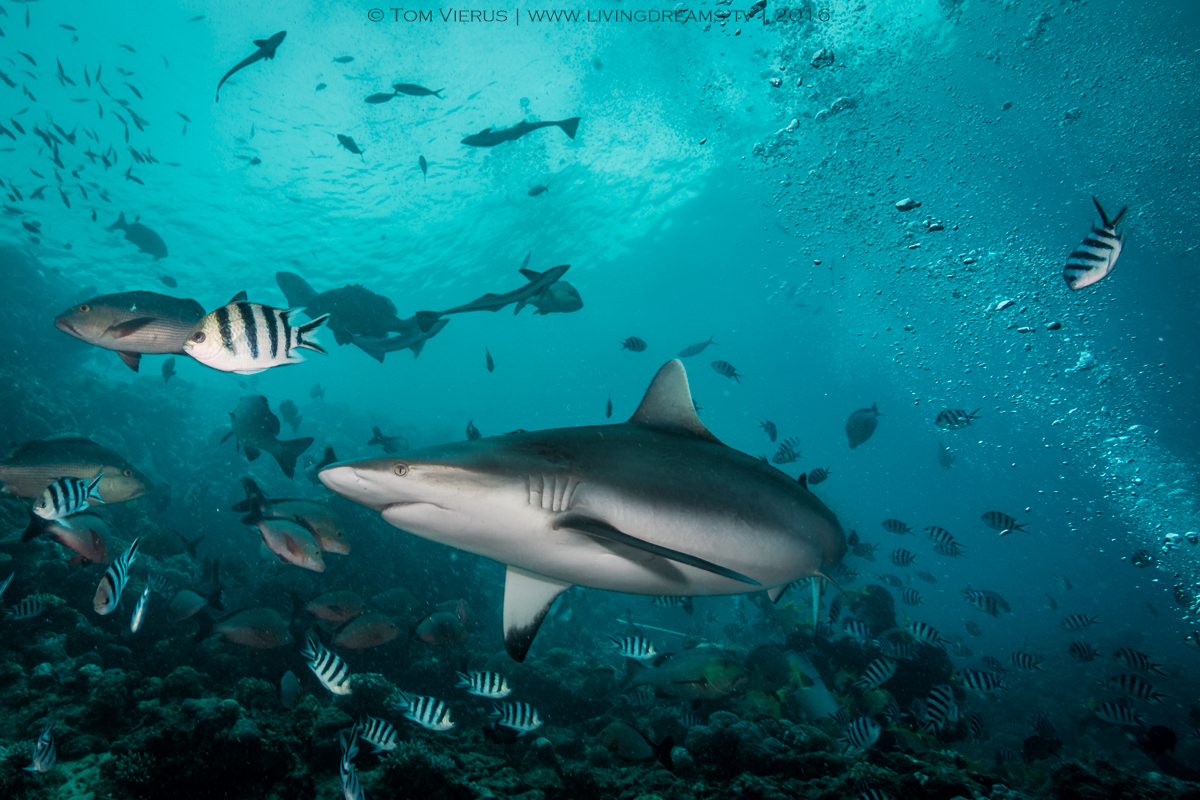 I am taking photos in the M(anual) Mode of my Nikon D7100 and usually set my shutter speed to 1/200 sec and my aperture at f/8 before jumping into the water. Additionally, I switch off the ISO Automatic, just to make sure I am controlling the brightness of the image and not the camera. I am still learning every dive I do, and especially the strobes are a science for themselves. I am switching between the Low-STTL Mode and the Manual Mode of my Inon Z240’s. As a dive only last less than an hour and you can only practice underwater photography underwater (seems pretty logic) it is important to dive, dive and dive. 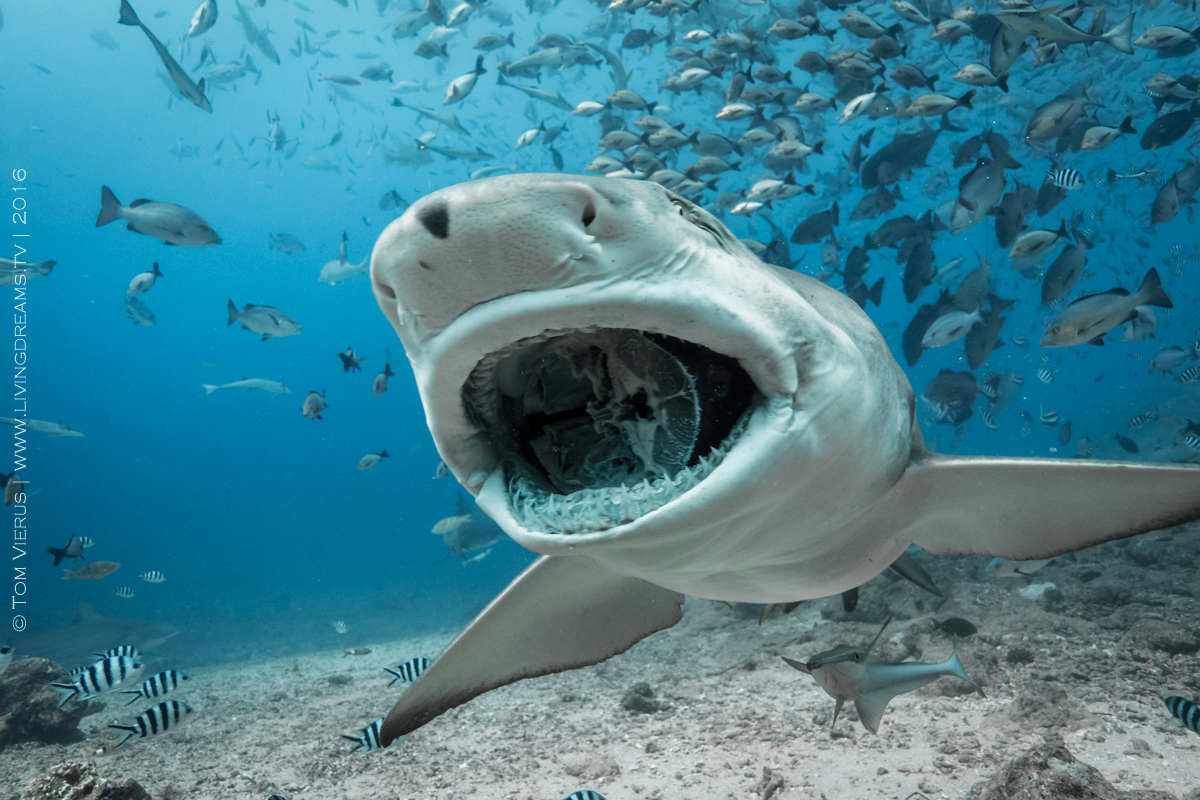 This sicklefin lemon shark (Negaprion acutidens) just took one of the tuna heads out of a feeders hand. This photo was taken with a wide-angle lens at 16mm, so any photographer might understand how close this encounter was.. 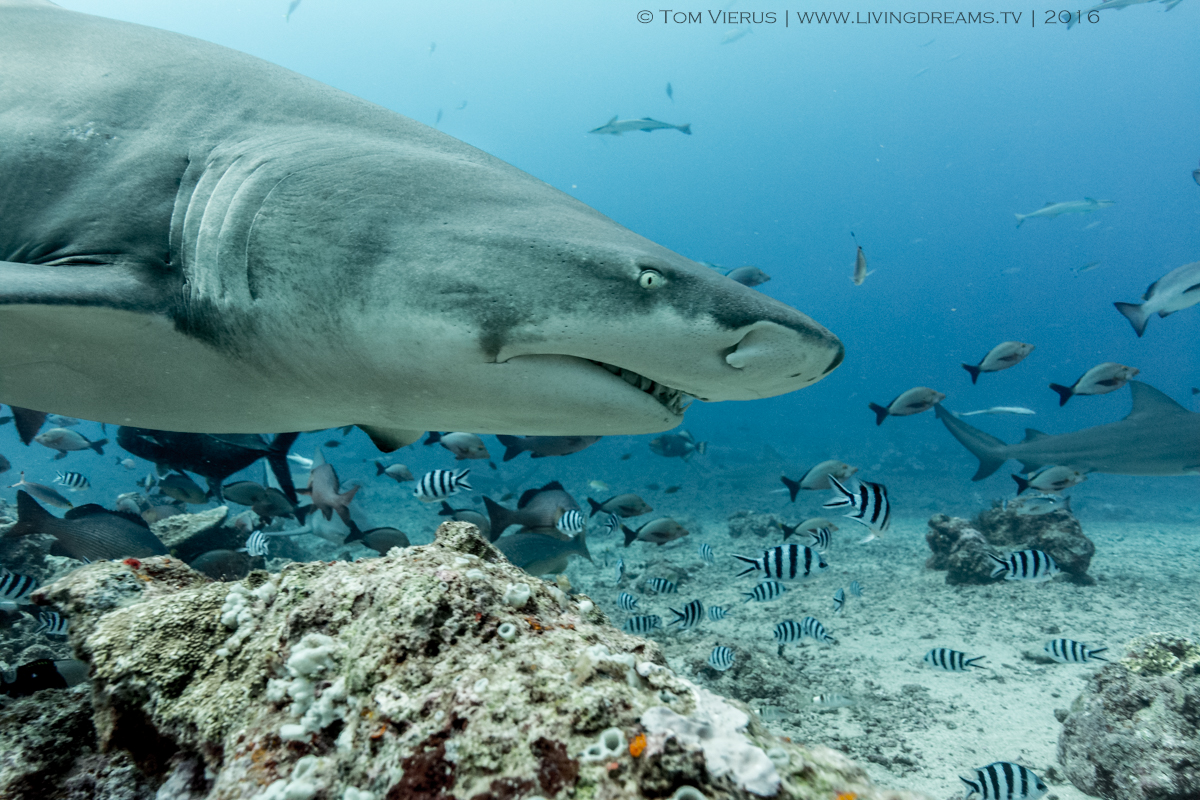 And the same shark from a different perspective. 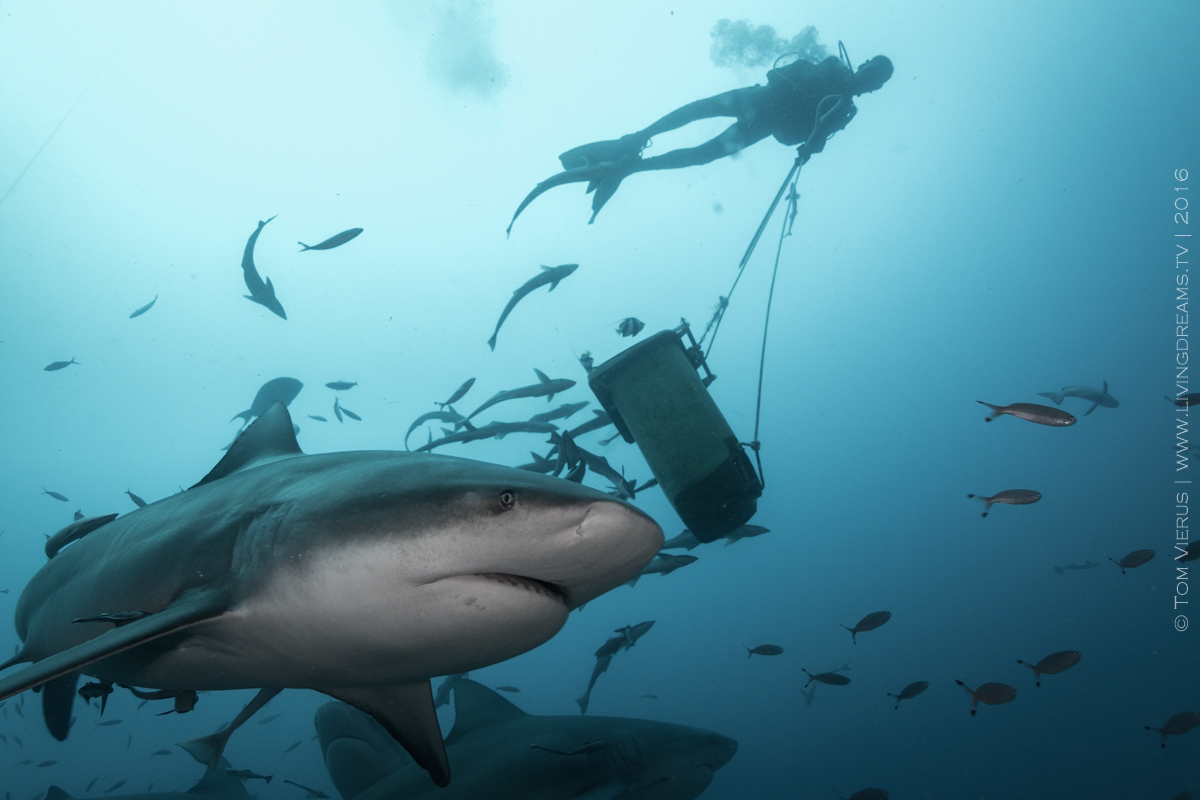 A bull shark and a diver with the bin that contains a tuna head. By pulling on the ropes the feeder can actively decide when to drop one of the heads. 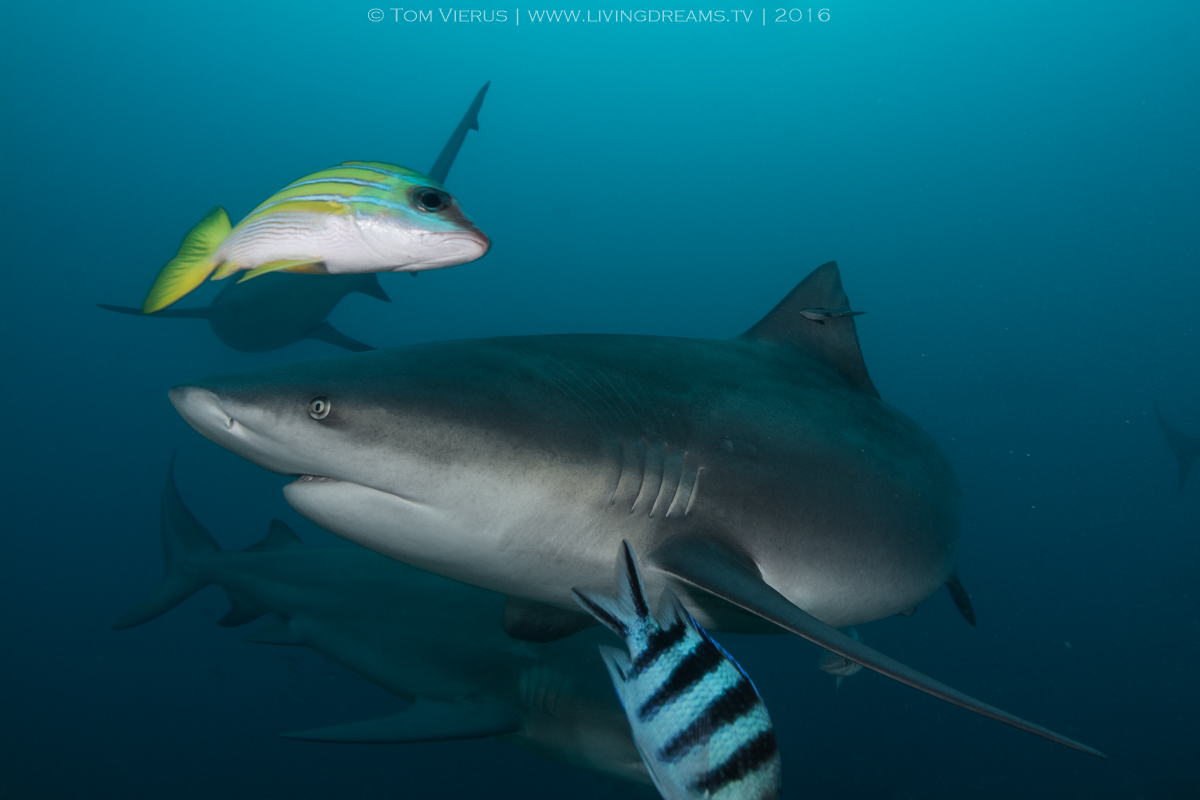 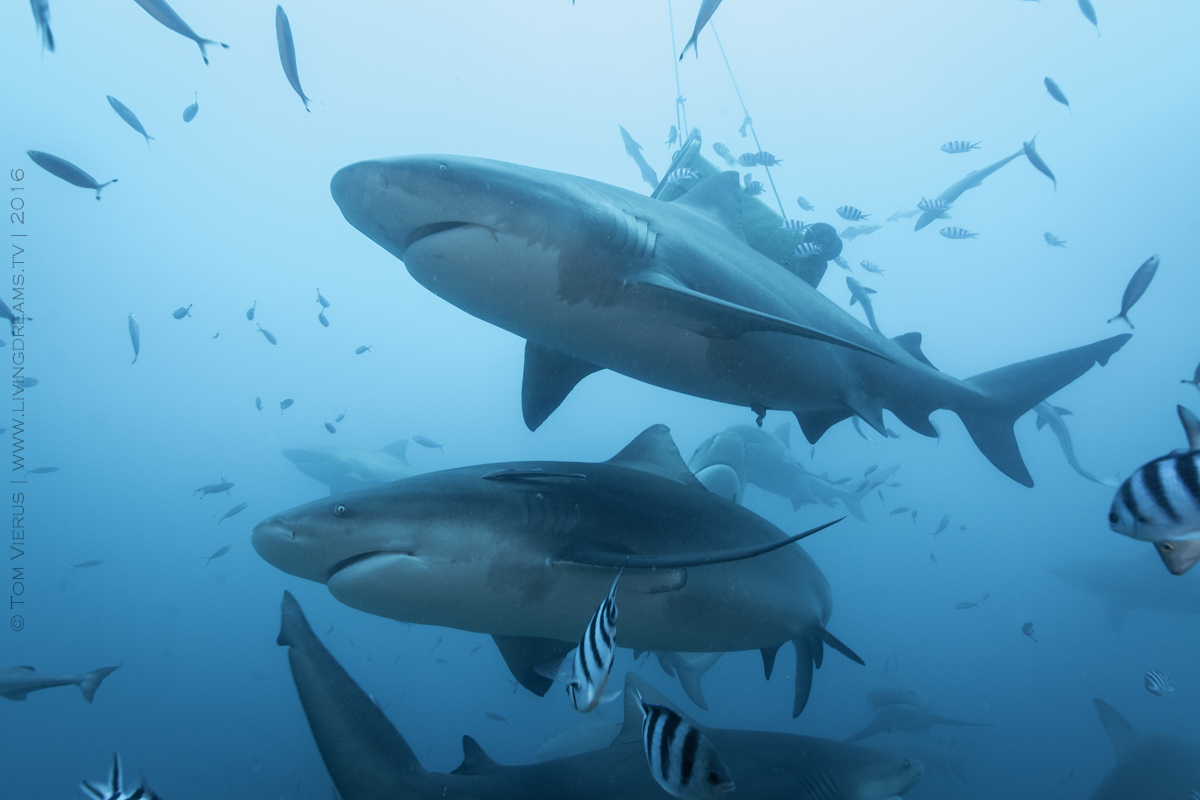 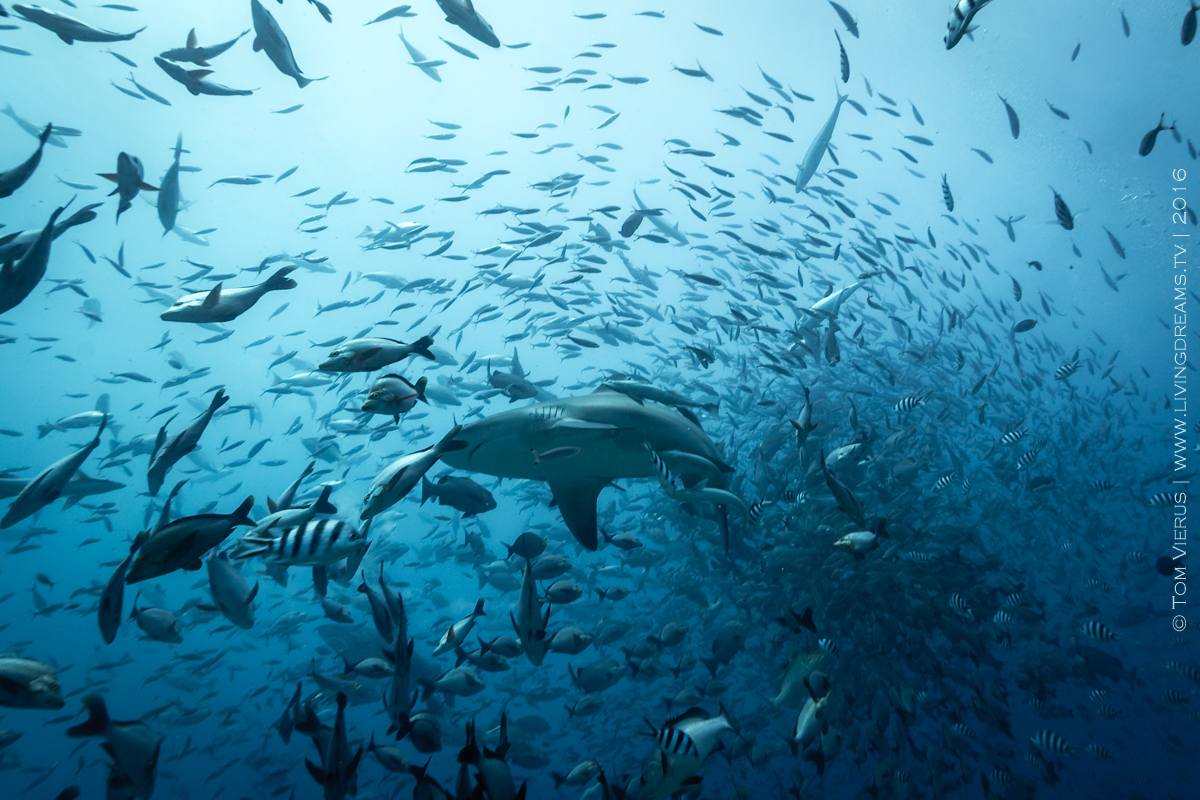 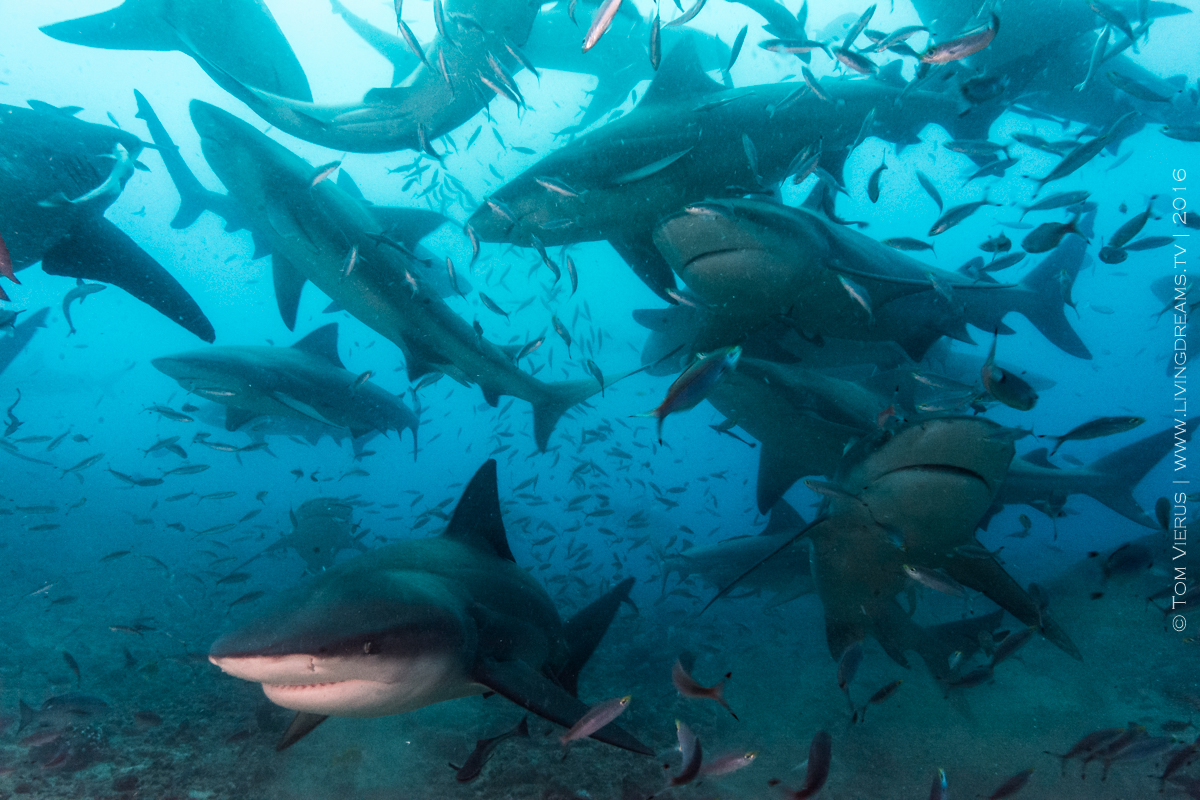 This image was taken one by far the most exciting dive of them all when one of the bulls actually responded to the electrical impulses of my strobe and had a test bite on it and I got rammed about three times. Jesus, that was one hell of an adrenaline dive!! 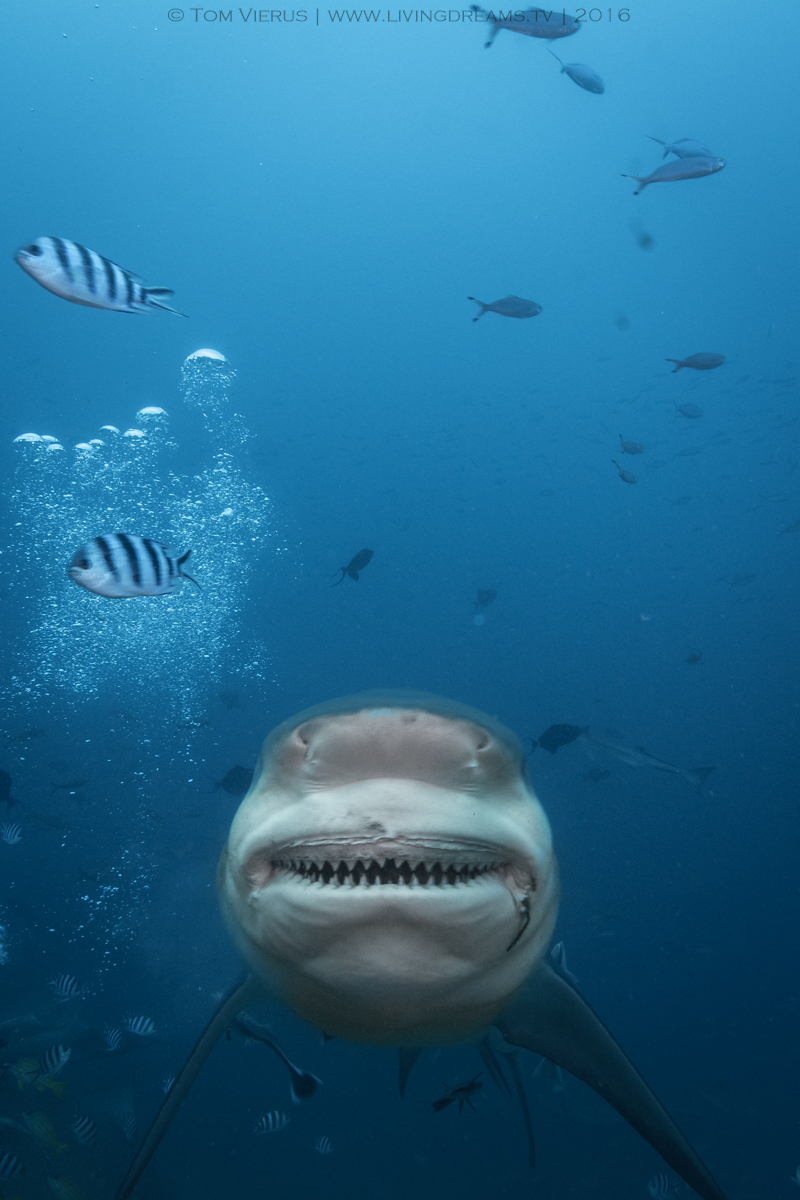 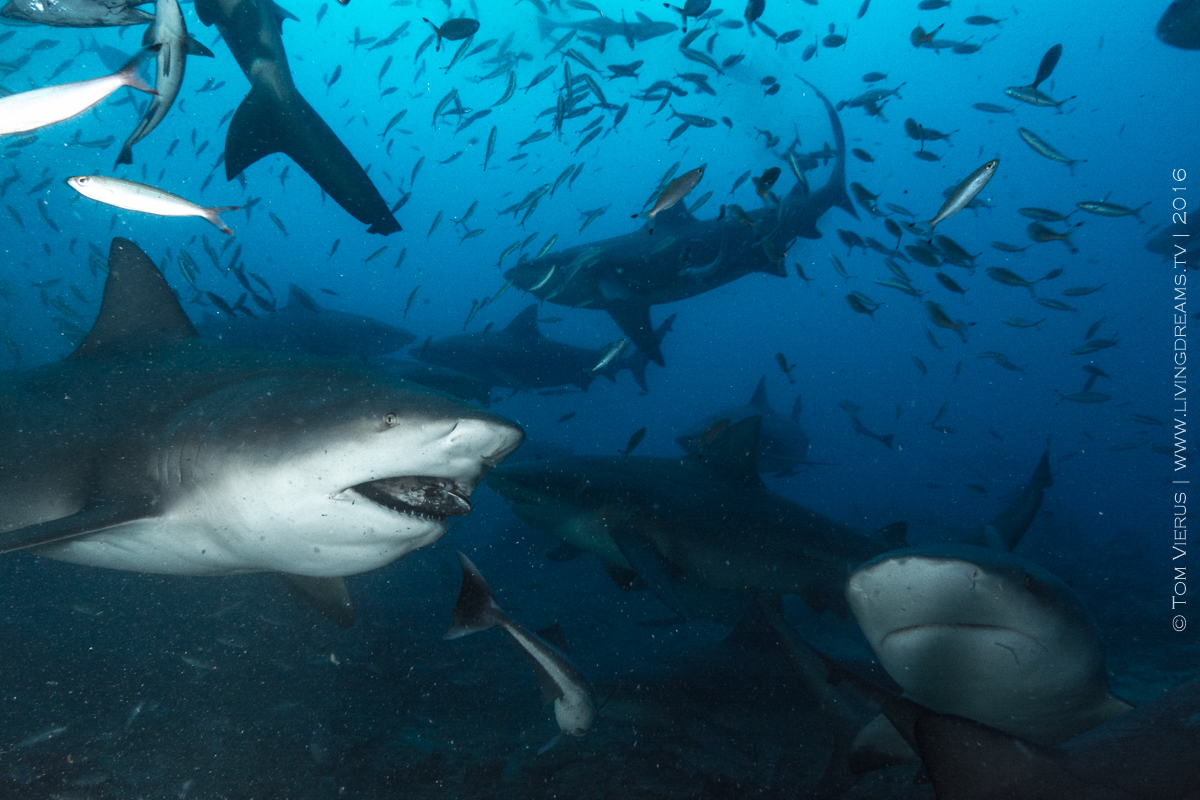 Not the best visibility and a lot of backscatter, nevertheless I like this image showing the incredible strength of a bull shark. Did you know that bulls actually have the strongest bite of all sharks? It is equivalent to around 6000N as research has shown! 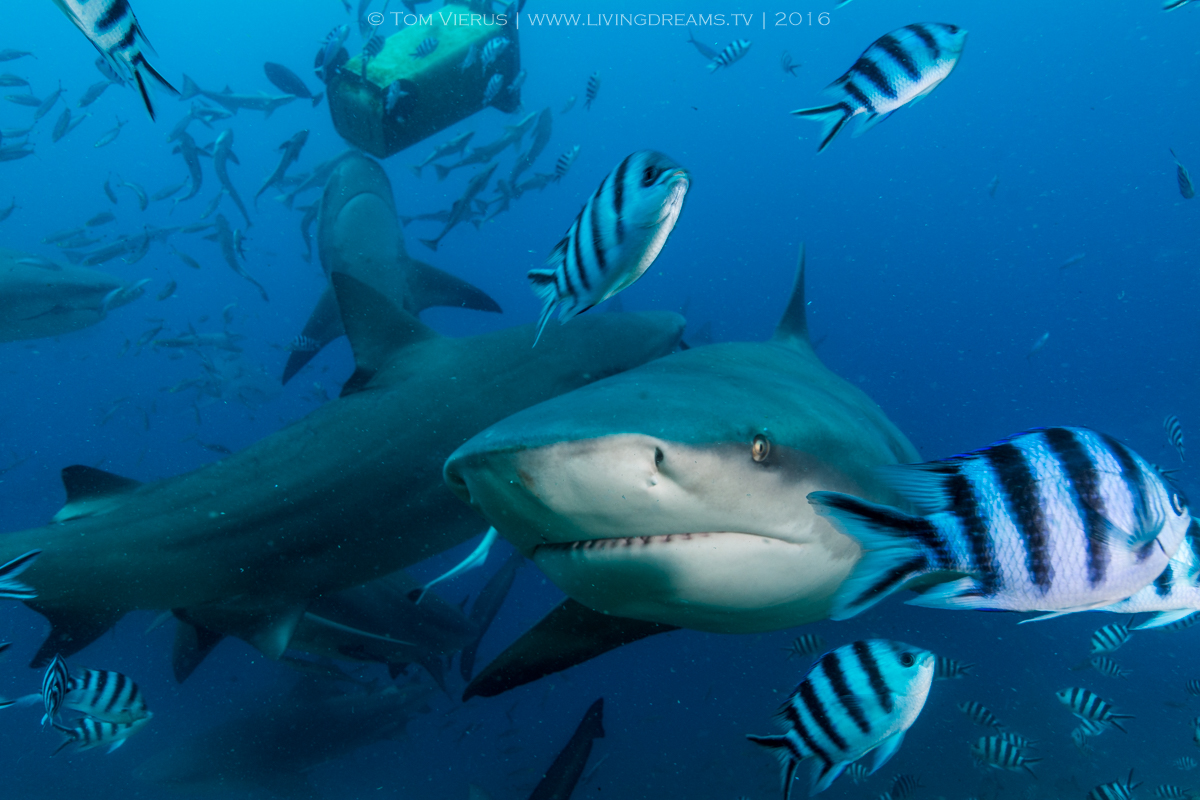 All in all, I am pretty happy with my Sechura housing from BS Kinetics and I do see a gradual improvement of how I get used to the handling.  The thought of leaving soon and not being able to dive with sharks for while makes me quite sad, but I might be back sooner than expected. You never know what life holds on hand for one’s future.. 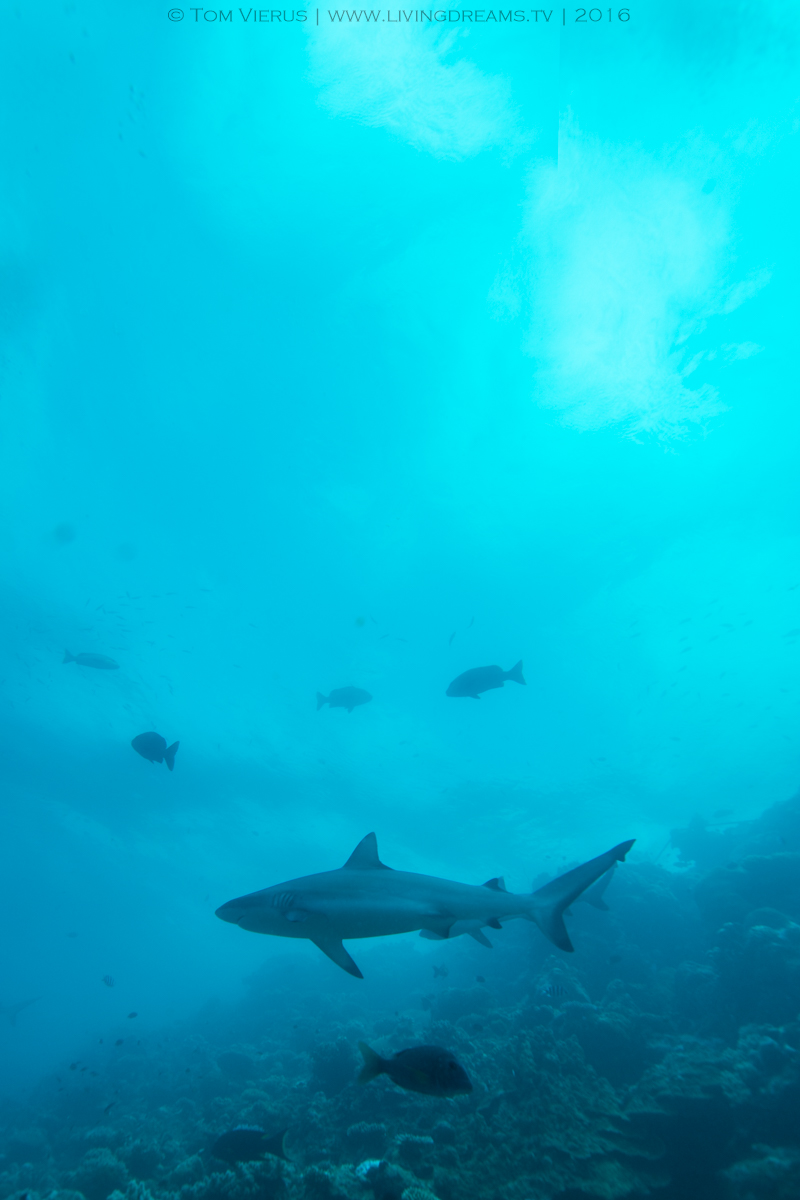 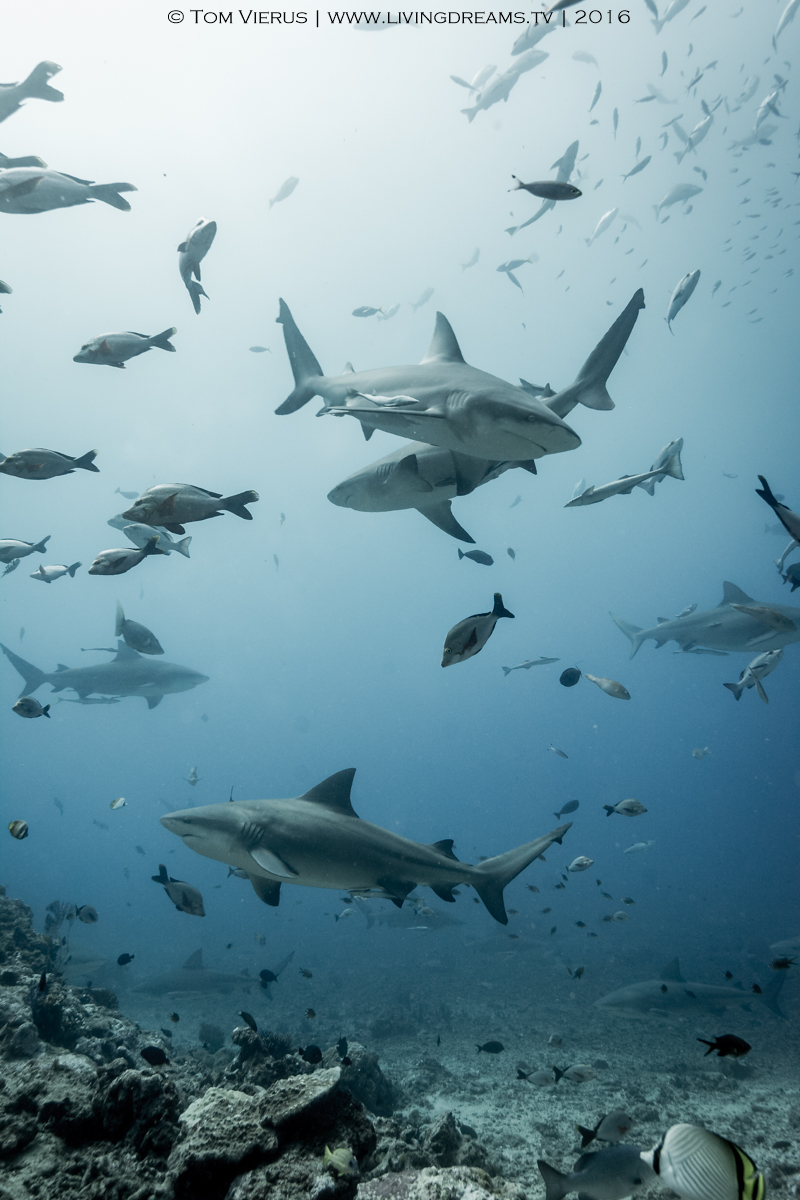 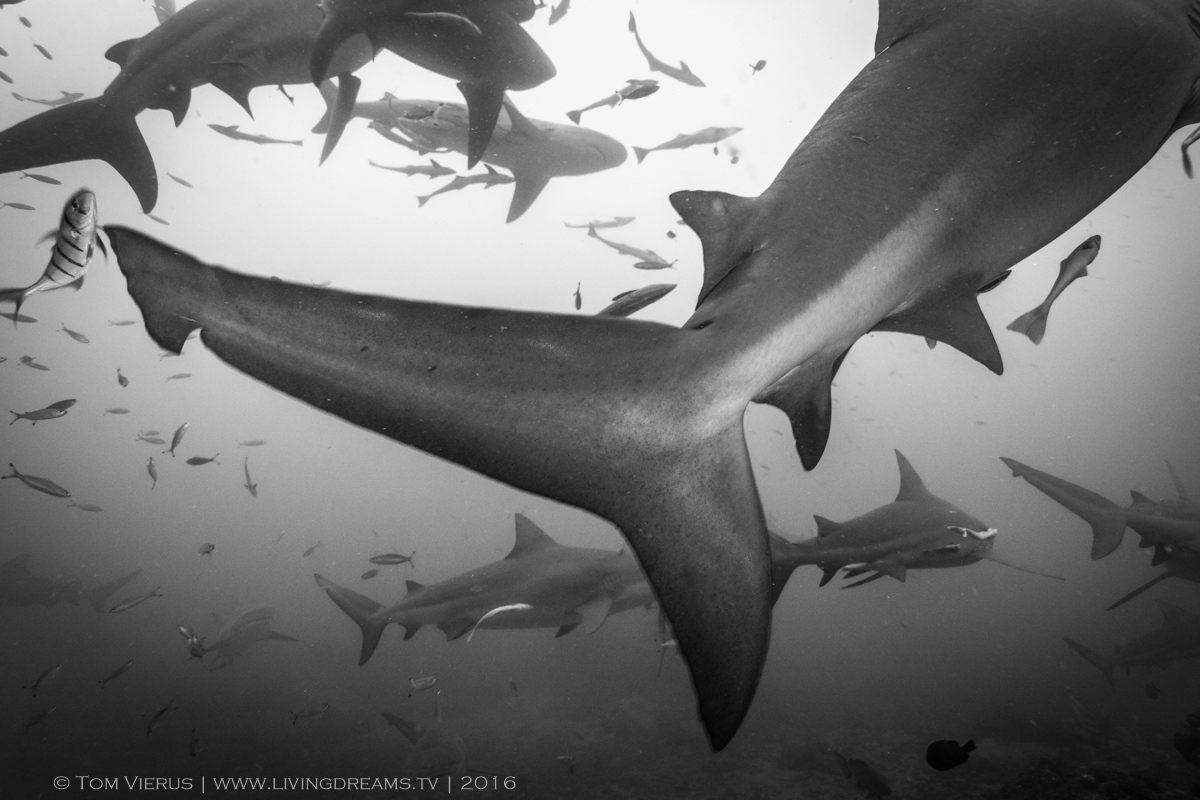 The caudal fin of a bull shark. 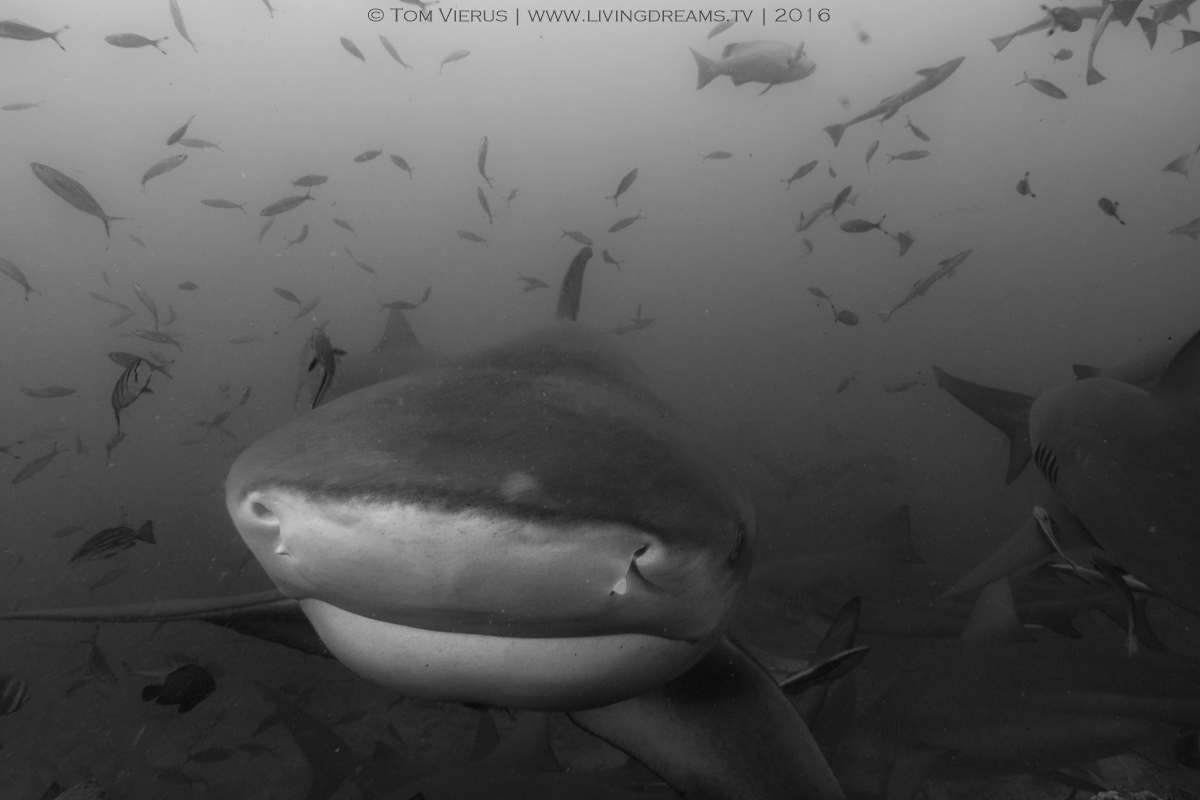 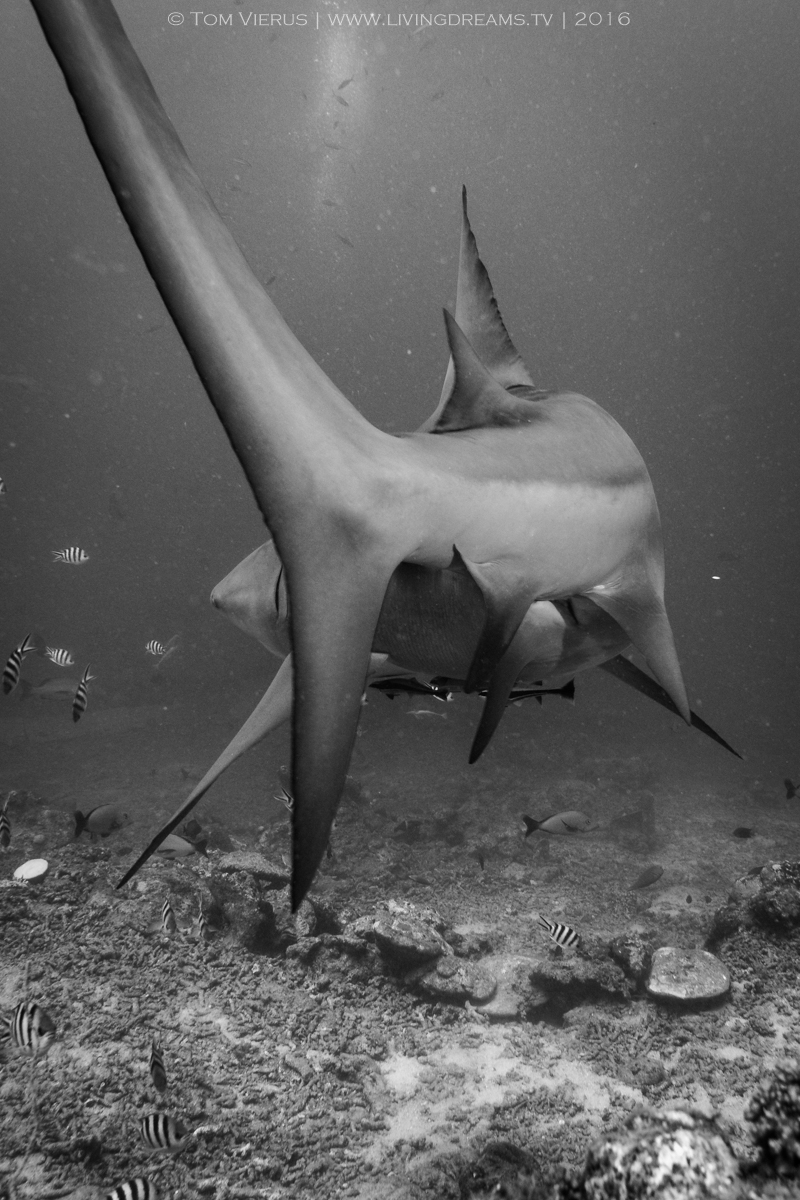 The sight of a mature bull shark swimming off. 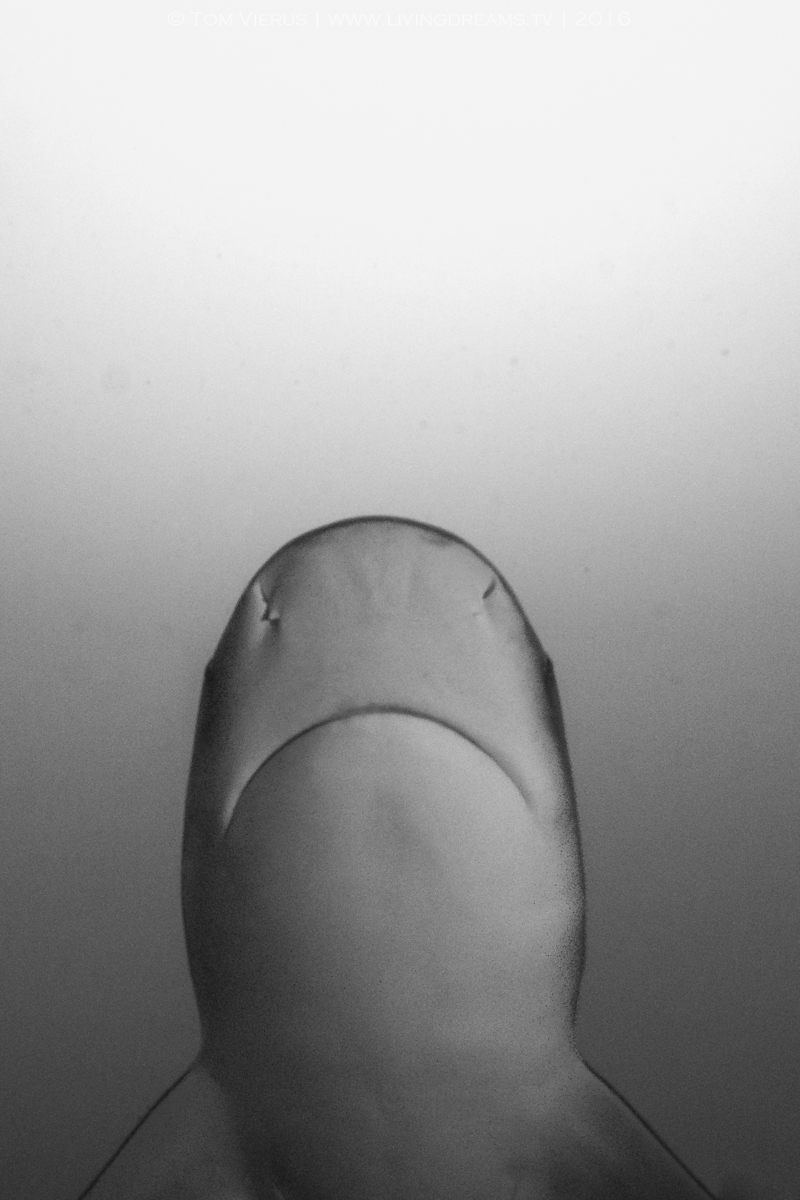 The silhouette of a fully grown bull shark. 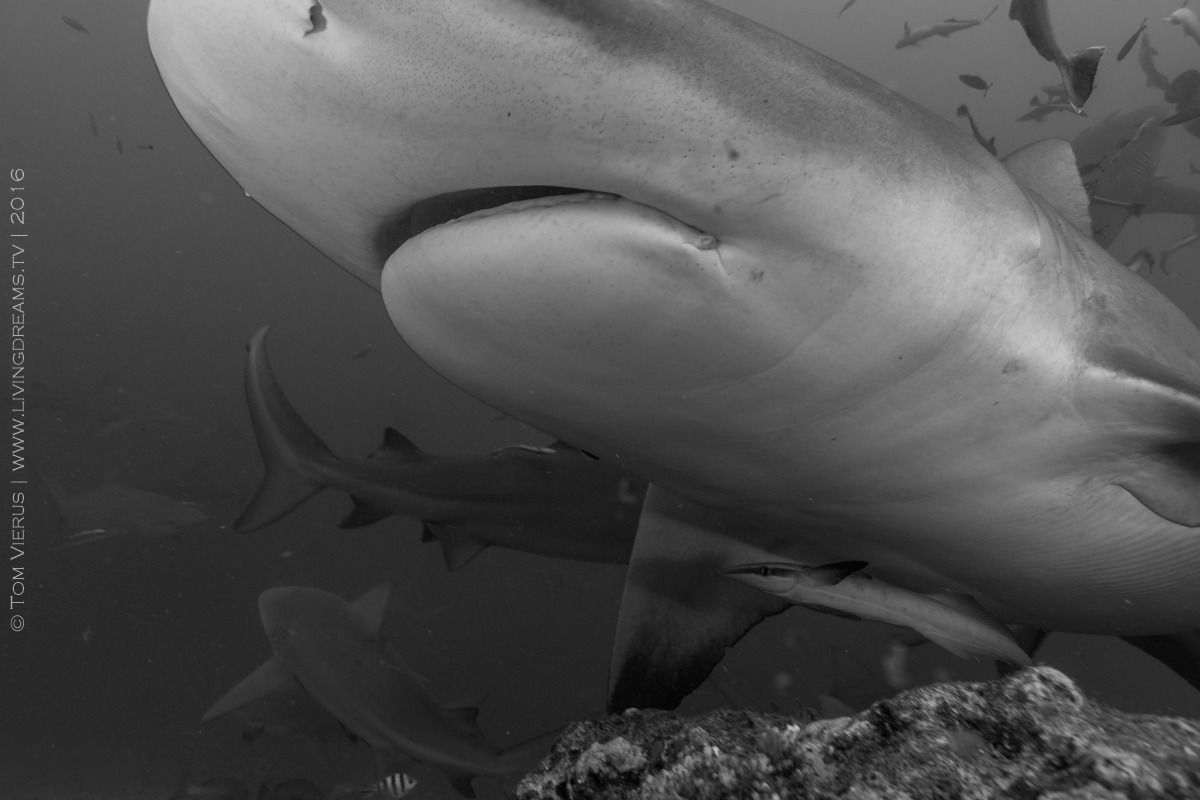 I hope you enjoyed this compilation of some of my favorite shots of the incredible shark dives of Fiji! Let me know what you think of them and if you have any comments, thoughts, questions or tips please share them in the comment section below. I am happy with every piece of advice and feedback! Happy diving everyone and may the good light be with you! 🙂

Some really nice shots, Tom! I personally prefer those “cleaner” shots with one or two central subjects (No. 4 with the blacktip over the Acropora corals and the sunrays, No. 6 with the Grey reef shark). I hope your strobe is still fine after the bullshark bite 😉
Best regards,
Patrick

Hey Patrick! Thanks for your feedback! Yeah, number four is one of my absolute favorites, too! That was the only day (!), we actually had the sun out shining, thus, I was able to catch some sun rays shining through the water column. Strobe is luckily fine 😀 I have seen you have treated yourself with the Tamron – nice lens, hey?
Unfortunately it didn’t get much exercise here on Fiji, not too much wildlife around here (at least above land) and usually too heavy to take with me. Maybe some time in future we can finally have our joint photo tour! Would be awesome!

Hey Tom,
I would really love to make a photo tour with you! Didn´t meet people yet, who are crazy about nature photography as I am 🙂 I will stay in Kiel for some more months – and it is no big distance to Bremen 😉 I´m starting soon with smooth snake and sand lizard monitoring (in April) and especially in “my” bog there is a lot of wildlife (red deer, roe deer, cranes, snakes…). So loads of opportunities.
Yes, I am very satisfied with the Tamron and I´m thinking of getting a camouflage tent to get better shots. Even 600mm on a crop sensor can be too short sometimes…
But first of all, enjoy your remaining days in Fiji!
Patrick

[…] met incredibly interesting and inspiring people. Besides all that, I made a huge step forward in my underwater photograhy and was able to conduct many sharkdives with the ever-smily team of Beqa Adventure Divers. I came […] 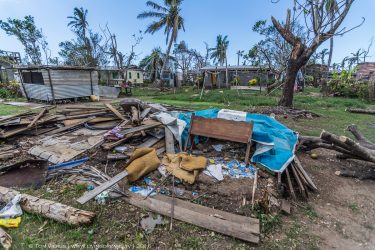 It’s been quiet on my blog for a few weeks. A lot has happened here in Fiji since my last post: Cyclone Winston swooped...