How to make Seitan from wheat gluten!

Since I´ve gone vegetarian I´ven been browsing the internet a lot for new ideas and recipes. I have been eating and trying a lot with my girlfriend and every time I am amazed how much great stuff there is to eat. Since I am no longer eating meat and trying to cut back dairy products as well, I have to look after my protein sources, minerals etc. So a couple of weeks ago I found out about SEITAN, an easy to make, cheap and protein-rich dough. I got myself a 5kg pack of wheat gluten (basically its flour without the starch) for a bit more than 20 Euros on ebay. This pack should last a couple of months. So on one of my last work days I finally got the chance to try it out and was quite happy with the result. Remember that the produced Seitan will taste the way you flavor it – so be creative 🙂

Remember this was just my way of spicing it – you can add whatever you feel like. And rather spice it MORE than you´d normally do, as the the wheat gluten itself doesn´t have a flavor – you are creating it! 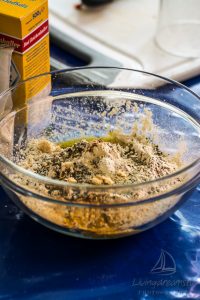 First of all I put 250 grams of wheat gluten into a bowl and added the following ingredients:

I then added the same amount of water in ml (250ml) and started kneading it till it had a nice structure. Almost immediately the dough became kind of a gum-like mass. I then rolled it to the form of a leaf of bred and cut it into slices. Even though it already looks great, we are not done yet – now the second part of the recipe starts: the cooking. 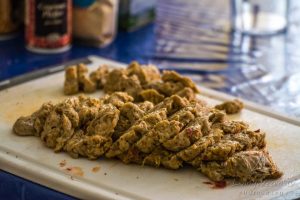 This is how the dough looked like before cooking!

I filled a pot with around 3 liters of water and added almost half a tube of tomato paste, the soy sauce, maybe around two to three spoon of vegetable stock, three gloves of garlic, one onion and the laurel leaves. I then let it cook for around 45 to 60 minutes depending on the sizes of the pieces. The sauce actually turned out really great! I tried my ready made Seitan and have to say I really liked it! 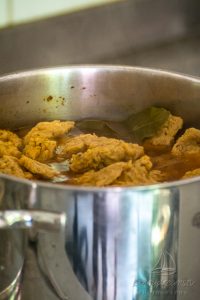 It was quite fluffy, but for the first try really satisfying. After the cooking, I fried it in a pan, again with some garlic and onions and added some sauce to it. With some oven potatoes and a salad it made a great dish. I ate it with three friends and all of them actually liked the taste of it, though they said the consistency was quite unusual for their taste. The 250 grams turned out quite a few pieces, and finally I ended up eating three times from it!

Personally, I think it could be a bit more dense, but as I said, this was my first try and there are many more to come. It is a healthy alternative to meat, very rich in protein and depending on how you prepare it very low in calories. The wheat powder itself contains almost 80% proteins!

Give it a try and let me know how you like it! Enjoy 🙂 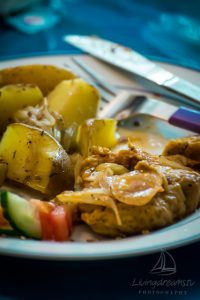 I was just browsing through your blog and found this recipe for Seitan, which is great because just yesterday I was thinking about trying Seitan! To be honest, I don´t like the taste of some of the soja products (like soja chunks) but I remember myself eating Seitan on a festival few years back and it was quite tasty roasted on a grill! Since I´m trying the vegetarian way of life (only for 2 weeks now…) I think this is a good and tasty source of proteins. So thanks for the recipe – I will give it a try with some herbs from our balcony (fresh thyme – yummy) 😉

Hey Patrick! Great that you have decided to become a vegetarian! Keep going! Let me know how it tasted 😉
I´ve been living vegan for around 8 months and I am doing great! Can highly recommend that lifestyle to you – no animal suffering, ecologically way better and if it´s done right very healthy! 🙂 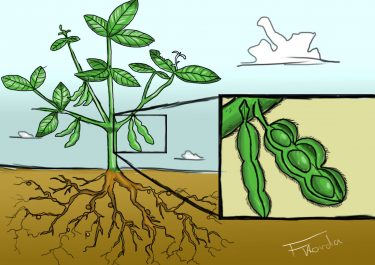 Miracle plant SOYBEANS - what is it, how does it look and what is it good for?

Most of us have already tried or at least heard of soybeans. But what is it and how does it look? Is it healthy or is there...