I had an exciting day yesterday (30th January 2020) as we opened my photo exhibition ‘Being Alive’ at the Alliance Francaise here in Suva. Its been a while in the planning and as any artist with exhibiting his/her own work, I hoped that the opening would not be an empty one. I was super happy that more than 100 people turned up!

A total of 29 images can be viewed over the next two weeks at the Alliance Francaise before the exhibition will move to the MIS School for a further two weeks of the exhibition. Titled “Being Alive” all images are centered around the beauty of the Pacific environment but at the same time also highlights the fragility of the ecosystems due to anthropogenic threats, such as climate change, pollution, habitat destruction and overexploitation of natural resources. 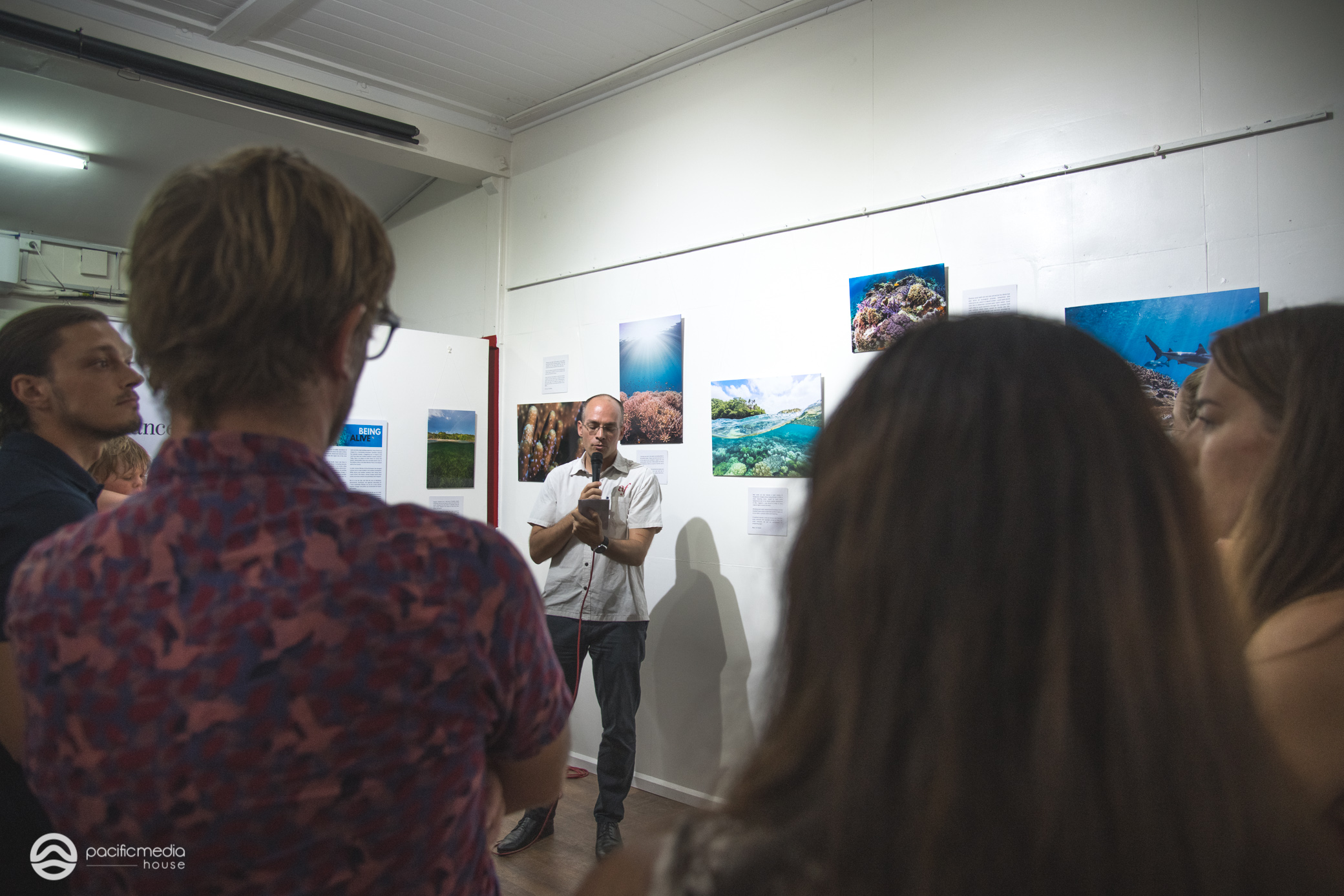 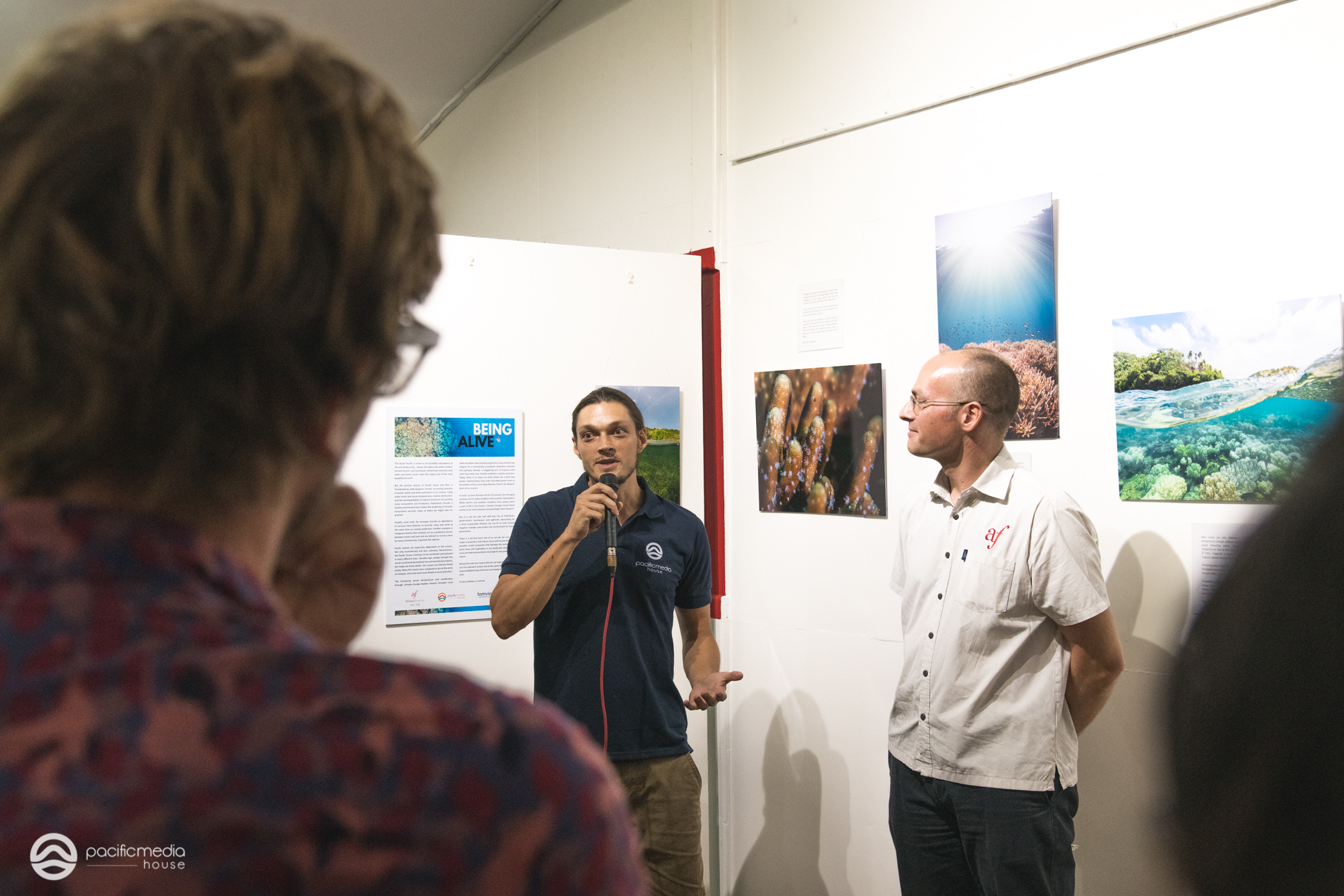 Together with Thomas Feldstein, the Director of the Alliance Francaise in Suva.

We all have a responsibility, too

The South Pacific is home to an incredible abundance of life and biodiversity – below and above the water surface. Ancient forests, vast bushlands, vibrant and colourful coral reefs, and fertile lands make this region one of the most beautiful on earth.

But the pristine beauty of Pacific fauna and flora is threatened by anthropogenic threats: increasing amounts of plastic waste and other pollutants in our oceans, rising water levels and ocean temperatures, habitat destruction, and the overexploitation of natural resources are pushing many ecosystems out of balance. Importantly though, a healthy environment also means the rendering of valuable ecosystems services, many of which we might take for granted.

Healthy coral reefs, for example, provide an abundance of services from fisheries to touristic value and serve at the same time as coastal protection. Another example is mangrove forests that similarly act as a protective barrier between ocean and land and are utilized as nursery areas by many commercially important fish species.

Pacific nations are especially dependant on the oceans. Not only economically but also culturally. Nevertheless, the Pacific Ocean continues to be overfished and polluted in many different ways. Decades ago, people thought the ocean could never be emptied, too vast were the boundaries, but today we know better: the oceans are literally fished empty. Many fish stocks have collapsed or are at the brink of collapse, and some were even fished to local extinction. 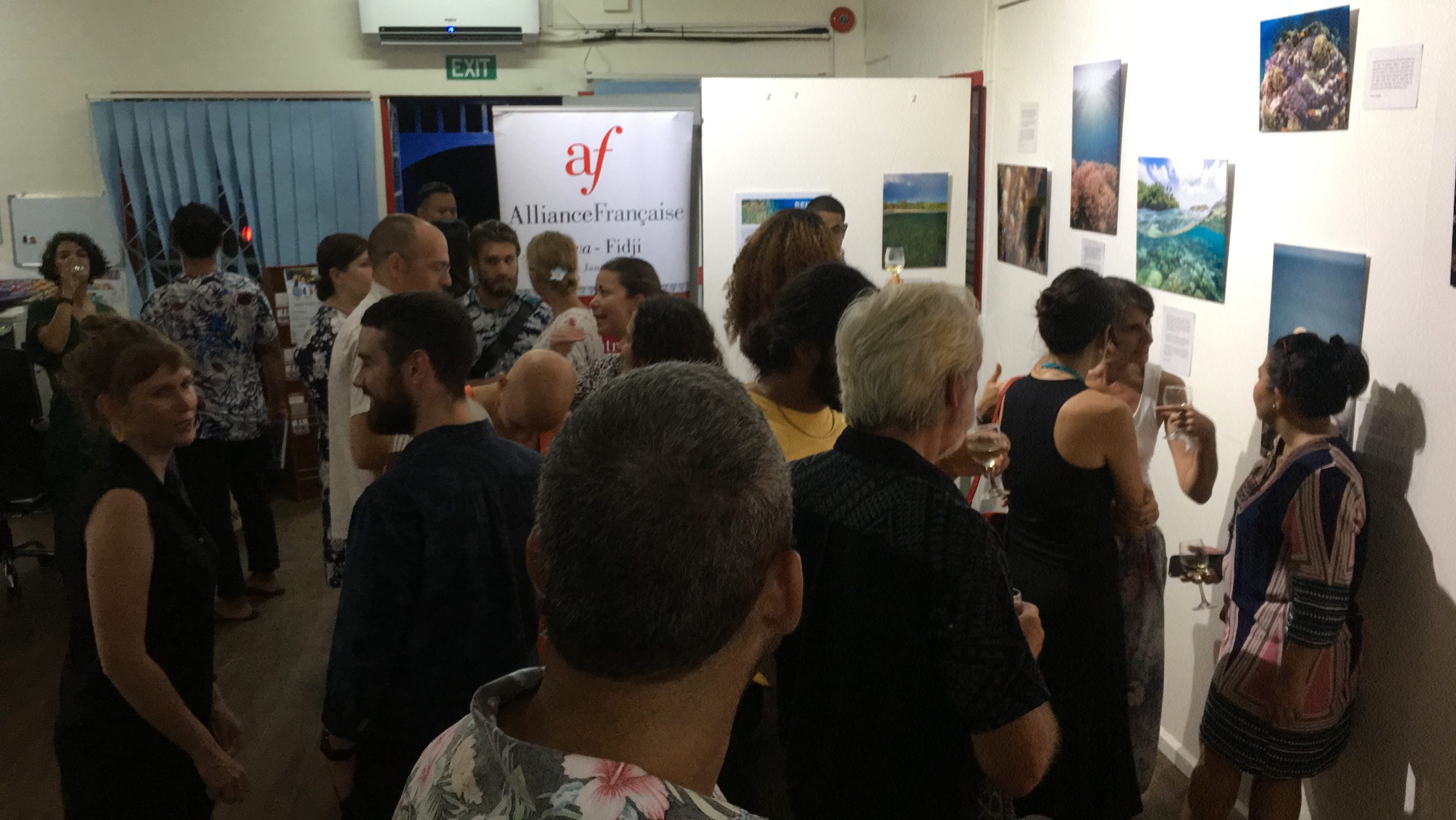 More than 100 people turned up for the opening! Thanks everyone for coming!

The increasing ocean temperature and acidification through climate-change-related impacts threaten coral reefs and other shell-building organisms, many of which are integral for a functioning ecosystem. Scientists estimate that globally already, a staggering 50% of tropical coral reefs have been lost. Another problem is plastic pollution. Today, there is no place on earth where we cannot find plastic. Submersibles have even recorded plastic trash at the bottom of the 11 km deep Mariana Trench, the deepest point of our oceans.

In 2016, Cyclone Winston hit the Fiji Islands, the strongest cyclone ever to make landfall in the southern hemisphere. While storms and weather variations have always been a part of life in the tropics, climate change causes these events to be more extreme and potentially more frequent.

But it is not too late, and with the rise of individuals, governments, businesses, and agencies advocating for a more sustainable lifestyle, we can fix or even reverse negative changes and protect our environment for future generations.

There is a lot that each one of us can do: we can avoid single-use plastics and reduce, reuse and recycle wherever possible, avoid companies that damage the environment, plant trees and vegetables in our backyards and support local and international NGOs that fight for the protection of nature.

Being Alive not only means that we can enjoy the beauty of our lives and all it entails, but at the same time, it inherits a responsibility to help where we can to keep our environment alive.

If nature thrives, so will we.

Interview at the Breakfast at Fiji One Show

A day before the exhibition opened Pauline Ferte, the Director of communications for the Alliance Francaise here in Suva, and I were invited to Breakfast at Fiji One, the Fijian morning show. We had a chat about the exhibition, the Pacific environment and how I became a photographer. Thanks for giving us the platform to raise awareness! 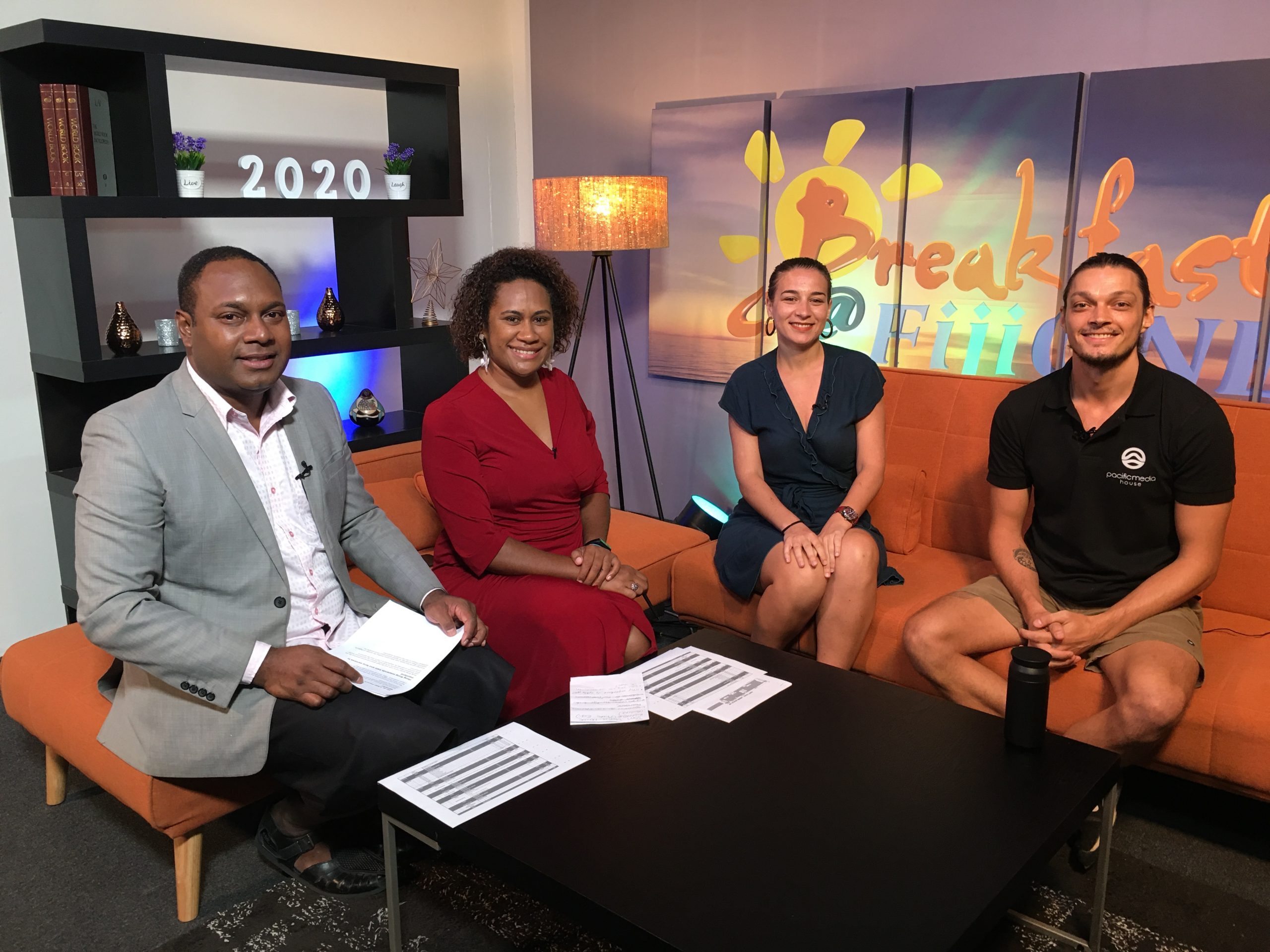 We had a great chat at the Breakfast at Fiji One Show. 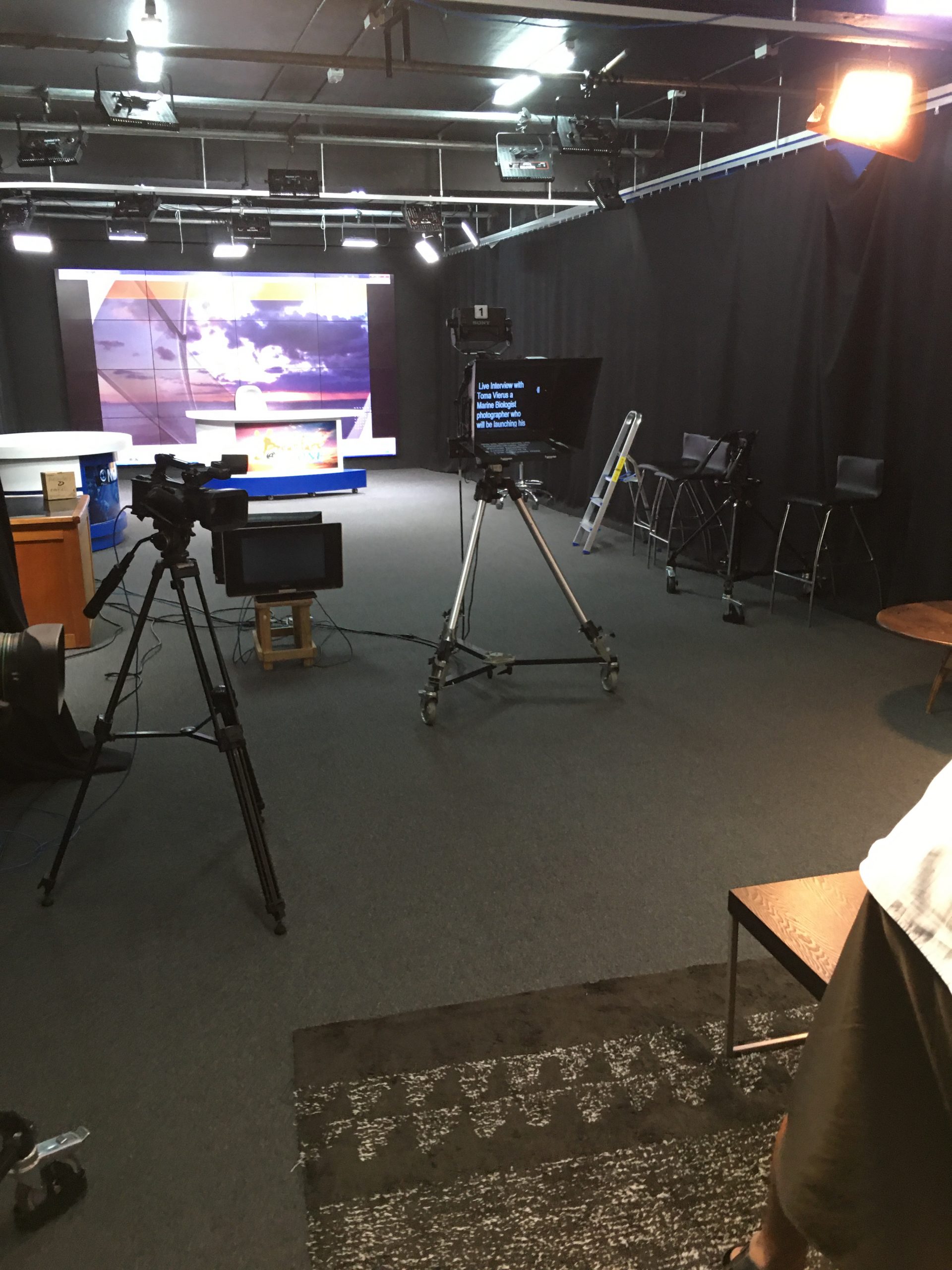 It was really exciting to get some insights into Fijian TV production!

All in all, it’s been a busy but great week and I am grateful, happy, and proud to have been able to realise the exhibition! If you live in Suva, take an hour and come by – you won’t regret it 🙂

The new decade has begun and with it, some exciting projects are in the making. After a little more than two months I can finally...