Lying around 46km north of the mainland Helgoland is the only high seas island of Germany. This rather majestic looking island offers great insights into northern sea ecology, attracts every year thousand of ornithologists and nature lovers and bears impressive geological formations (not to forget all the pretty baby seals by this time of the year) . The red sandstone reaches as high in the air as 51m and makes an impressive sight from below as well as from the top. The climate here is highly influenced by the Gulf Stream resulting in a warmer and milder climate than in the rest of Germany. Nevertheless in November the sky is mostly grey and the wind can blow quite strong, making the actual felt temperature way colder than the thermometer would show. Helgoland is a tiny island: inhabited by only 1400 people and an area of 1,7 km2 you can easily walk around the island in 3 hours (or less).

Helgoland has a long and very interesting history. There is evidence (flint tools) that it has been inhabited for around 15.700 years. Over time it has been ruled by the Danish (until 1807) and later during the Napoleon time by the British.  In 1890 Britain finally exchanged Helgoland for Zanzibar in a treaty with Germany (what a crazy trade!!). During the first and second world war Helgoland was then (ab)used as a naval base for ships and the Nazis even planned to enlarge its harbor to a size, that would facilitate the whole German fleet to be stationed here (“Projekt Hummerschere”).  After the second world war was finally over, Helgoland was bombed heavily by the British to ensure this island would never be misused for military purposes again. Due to this huge explosion the island we know today was created  –  with craters and the new formed “middleland” (“Mittelland”). Incredible but true: here on Helgoland one of the biggest non-nuclear explosions ever has been recorded. In 1947 incredible 6700 tonnes of explosives detonated, also referred to as the “Big Bang”.  In the early fifties people then returned to the empty  and newly shaped island, started rebuilding it and nowadays it is a famous holiday destination not only for Germans. 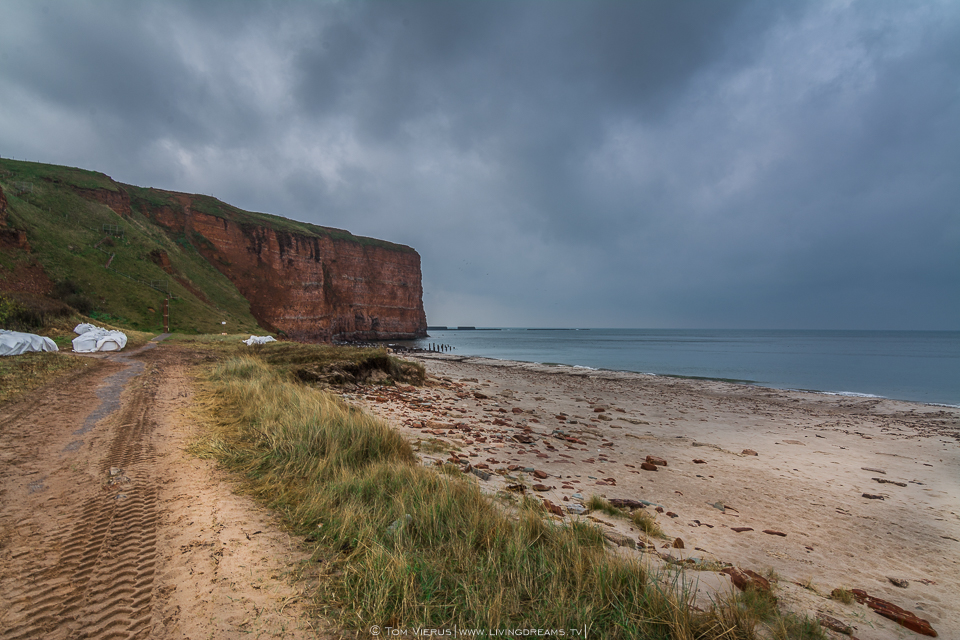 Helgoland and a typical sky during November 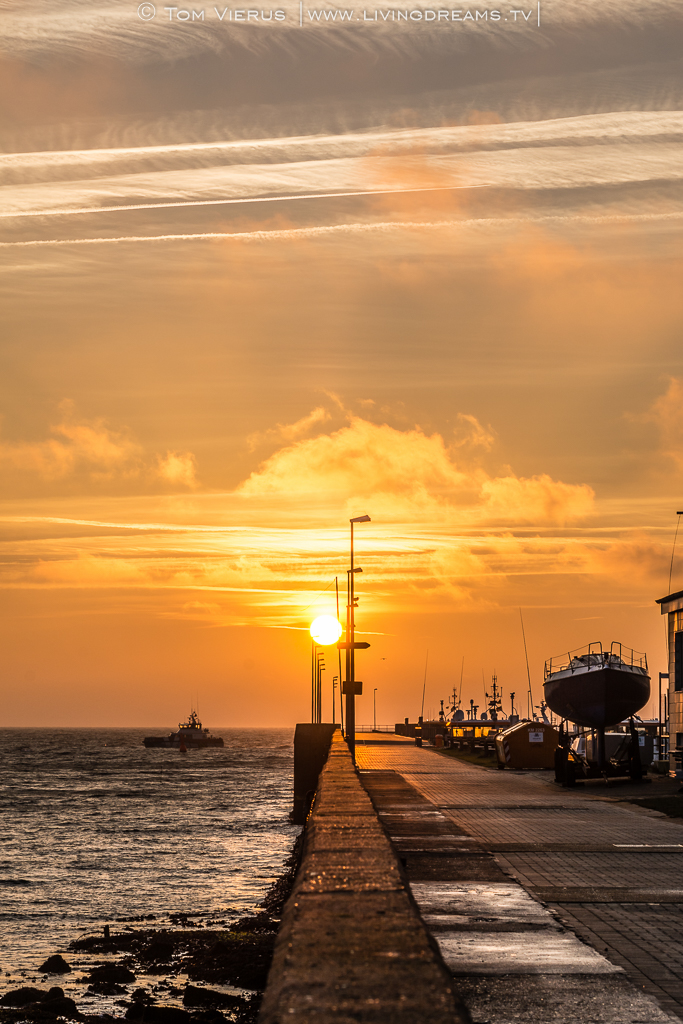 Part of The ISATEC program is a 8 day-excursion to this more or less remote place (you can reach it by ferry as well as by small planes, that land on the dune). Some might wonder why we visit Helgoland as part of a tropical study program but the answer is quite easy. Firstly Helgoland is very close to Bremen and a unique opportunity to study aquatic fauna and Flora in the field and secondly the basic underlying structure of Helgoland´s ecosystems can be applied to tropical ecosystems as well.

Us 23 students and our lecturer met early on Monday morning and took a bus to Cuxhaven where we boarded the ferry to Helgoland and needed around two and a half hours until we reached the island. There wasn´t too much wind and we had quite a calm ride with no one getting seasick (at least none that I know of). We dropped our stuff at the youth hostel of Helgoland and went for an exploration walk. Ole and myself, both equipped with long Tele-lenses usually fell a bit behind, as there is soooo much to take photos of on Helgoland. So many birds, so many great landscape shots.

The first four days of our trip focused on the marine fauna, whereas the last four days were reserved for aquatic flora, meaning for phytoplankton and macro algae. The first day we started right away taking samples – as this is highly tide dependent we had to meet at at 7 o´clock already to go out and get some fauna samples. We visited two sites and collected as much living animals as we could get – crabs, snails, arthropods and other rather smaller organisms. Back in our laboratory of the “Biologische Anstalt Helgoland” we put them in a kind of aquarium which was filled with water of the surrounding sea. One more advantages of Helgoland: by using the seawater we could ensure the organisms spent their time in their common environment and would survive as long as we freed them. 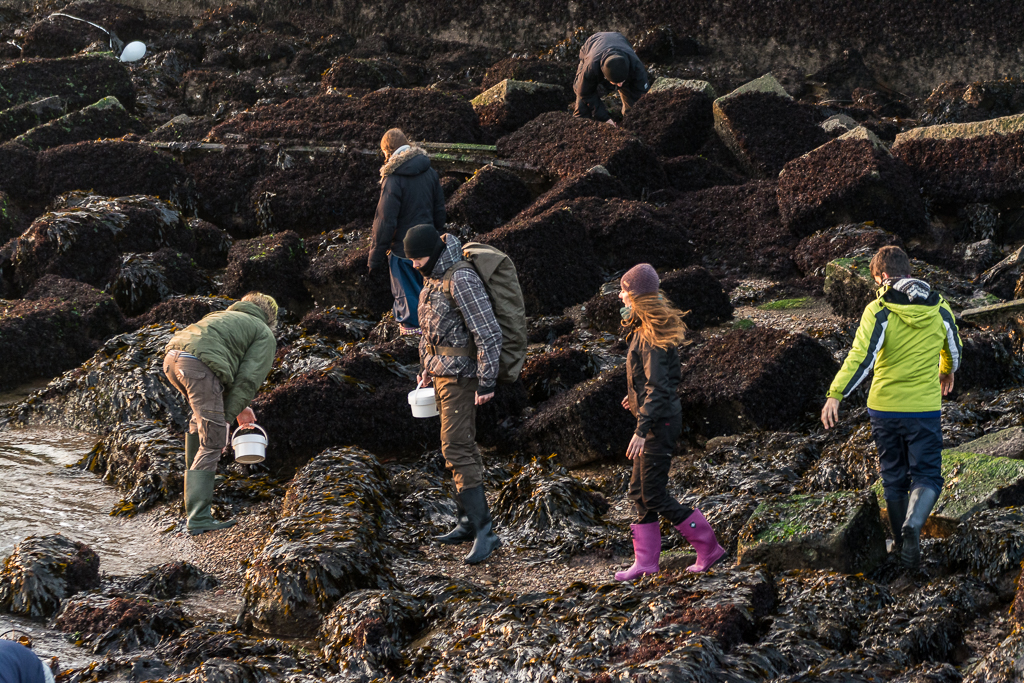 Collecting samples as the sun is rising

Sketching  the most important groups: Cnidaria, Molluscs, Crustacean and Echinodermata 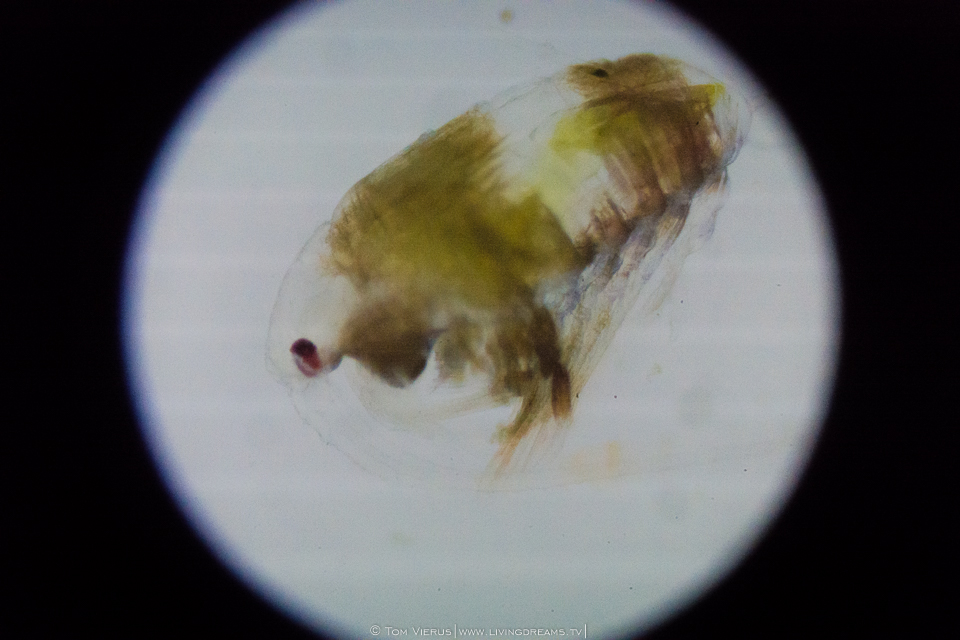 Copepod view through the microscope

On top we were also provided by plankton samples of the AWI (Alfred Wegener Institute), which has a field station here on Helgoland. Our task was to identify and draw organisms of each main group we were focusing on: Cnidaria (e.g  Anthozoa in Corals, jellyfish), Molluscs (e.g. snails, mussles), Crustacea (e.g crabs) and Echinodermata (e.g. sea urchins, sea stars) are quite important, whereas concerning planktonic organisms the Copepods make the largest group. Copepods are small predatory Crustaceans (and therefore animals) feeding on phytoplankton, that live in the water column and move with the ocean currents.

We spent our days sketching organisms, watching them through a bino and listening to the lectures. Whenever there was time and the weather was right I tried to get out and take photos. From a photographic point of view Helgoland is awesome and one could easily spent two weeks here photographing and filming its flora and fauna. In total I took around 2000 shots, which now wait to be looked at and sorted. 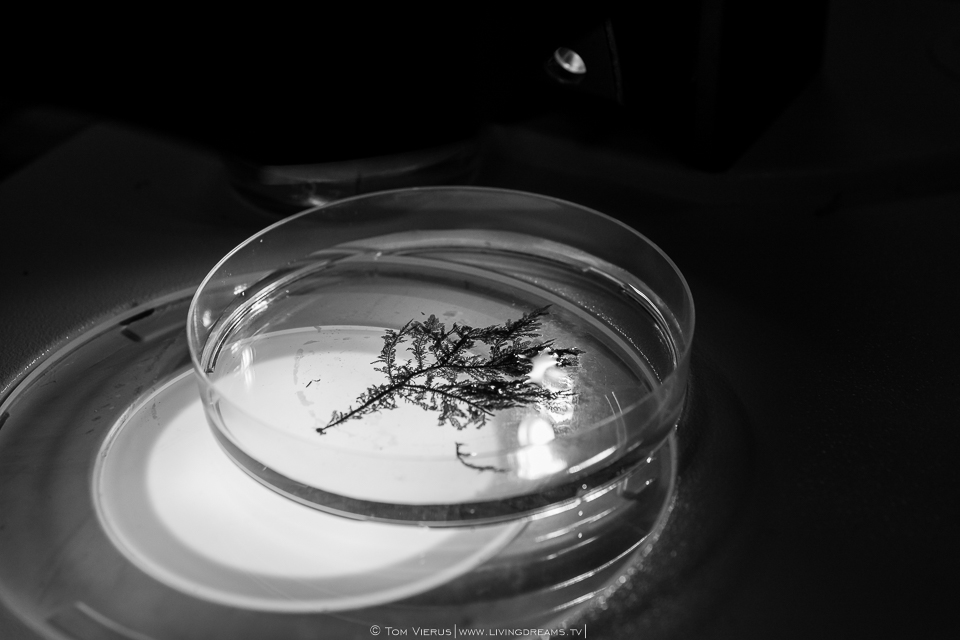 Determining algae is sometimes not an easy task! 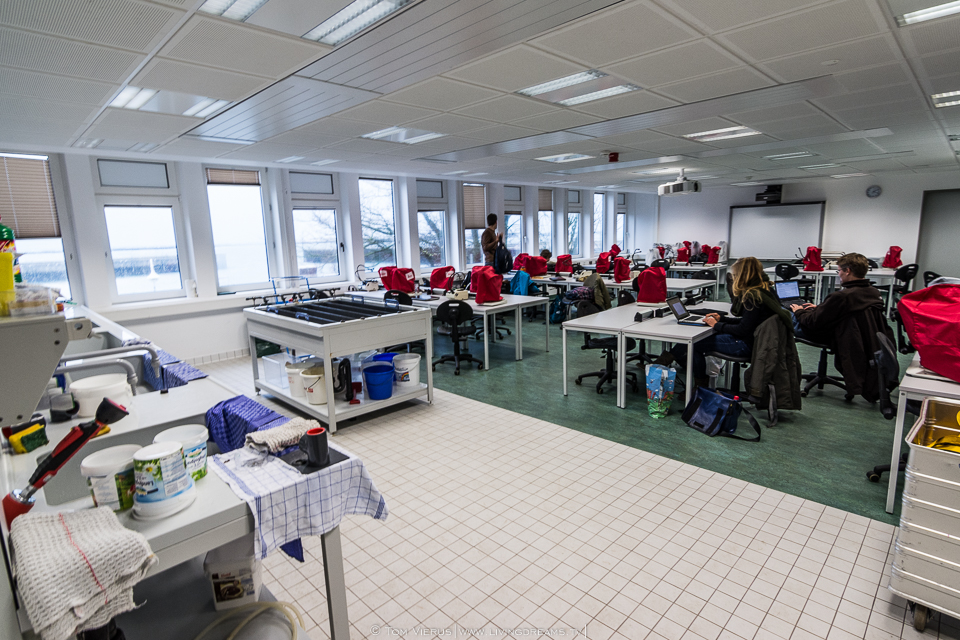 The wet- labaratory where we spent most of our time. 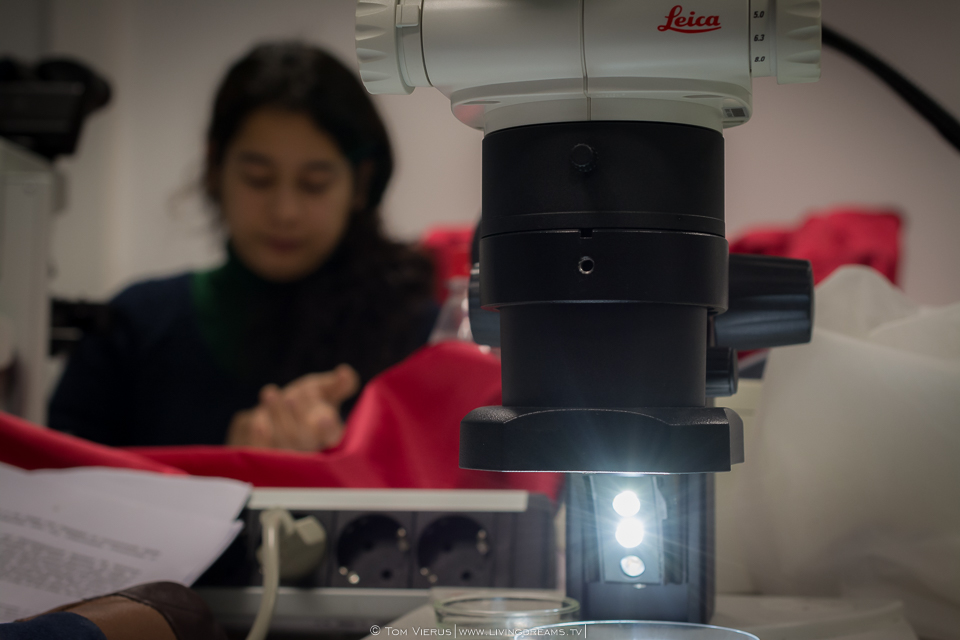 Our most important tool – the microscope 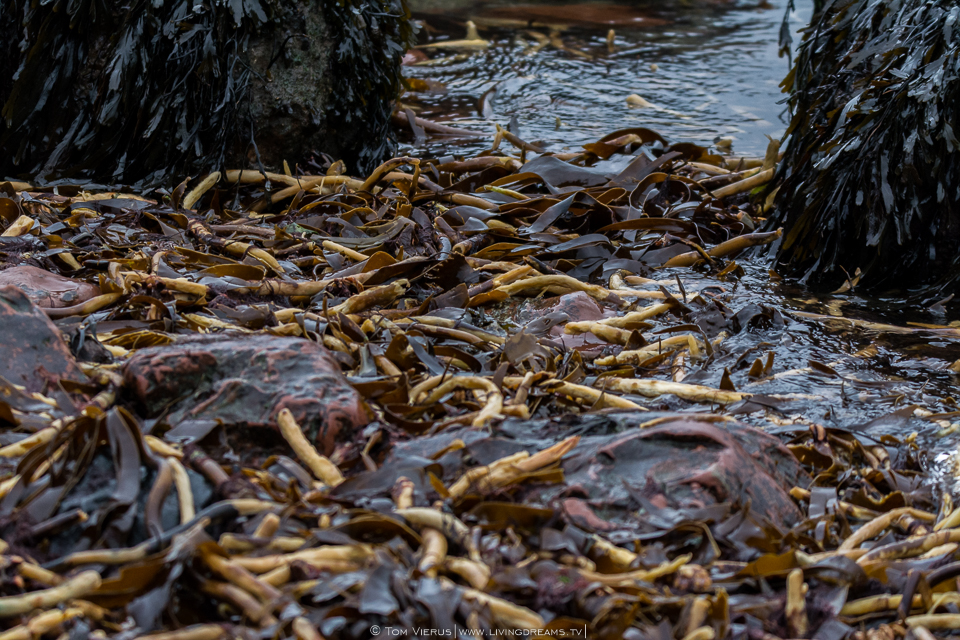 Unfortunately our excursion plan had been changed a bit as it normally lasts around ten days with a free weekend in-between, this time the free time was cut and we ended up with eight days and more or less being busy every day. The second half was a bit better concerning the time that we had free and all of us could follow whatever we wanted to do. We were joined by Professor Kai Bishop and Karin Springer, who came here to teach us in all matters concerning aquatic flora. Their enthusiasm about algae spread all over us and even though I am rather an animal’s person I enjoyed this part way more. 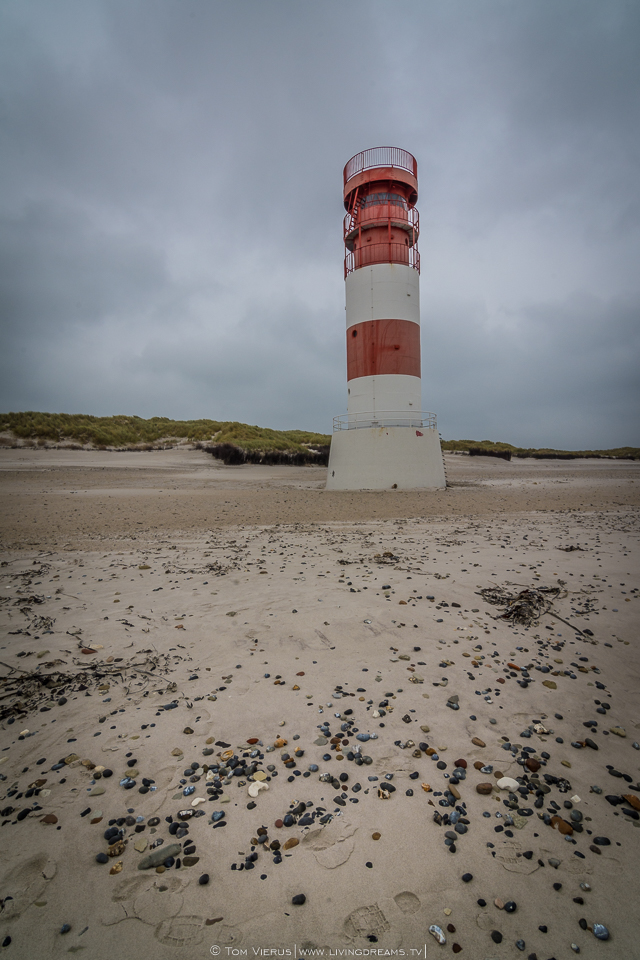 The lighthouse on the dune, a small island just next to Helgoland. 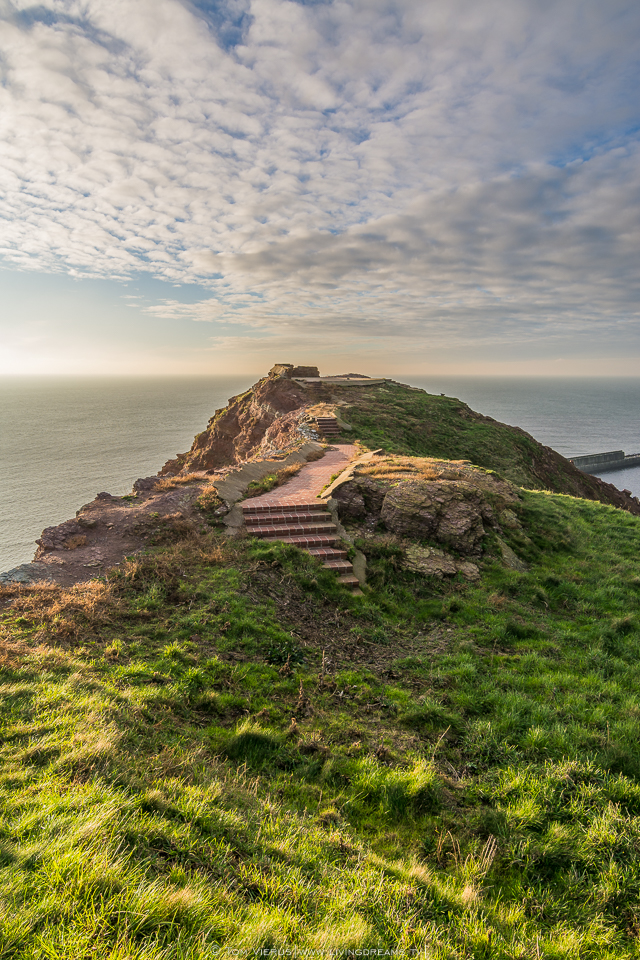 Beautiful view from the top of Helgoland´s cliffs during sunset.

Without algae no life on earth 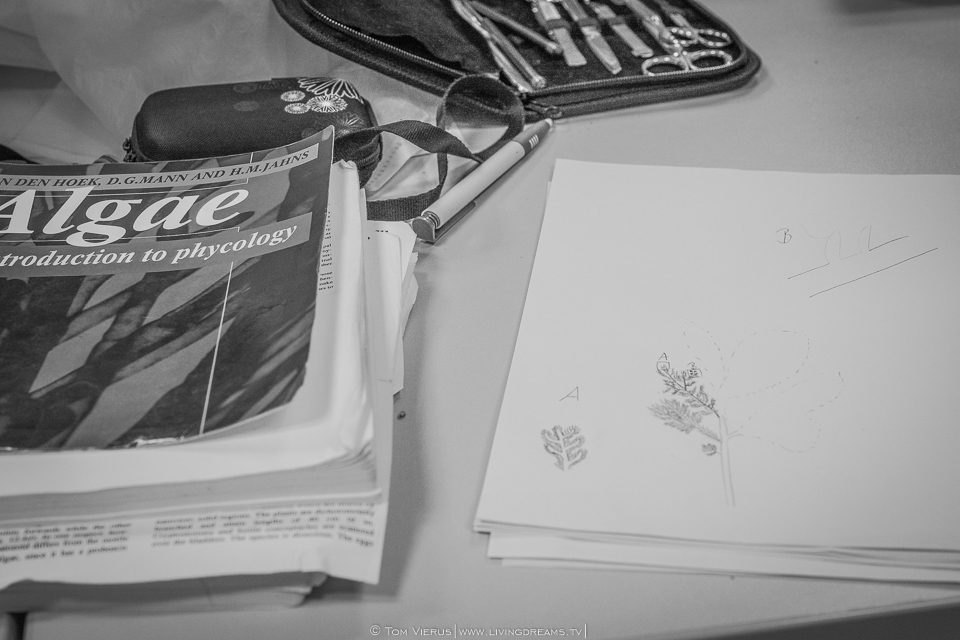 Algae play an enormously important role on our planet – they produce oxygen (approximately two thirds of the oxygen in our atmosphere are produced in the sea, so way more than in the rainforests!) and fix carbon dioxide for this process. Phytoplankton (the part of the plankton that belongs to the plants and executes photosynthesis) are also called primary producers. They create biomass from inorganic compounds (light) and stand at the bottom of the food chain: zooplankton (the part of plankton belonging to the animals) feed on it and they in turn are eaten by fish (or even whales that feed on krill, one form of zooplankton). This chain continuous up to top predators like sharks. So without this tiny plants floating unattended in our oceans, there´d be no life as we know it. Most of them are micrsoscopicially small and bear beautiful geometric forms. Due to their chloroplasts (energy producing organells) many of them shine greeny and one who hasn´t yet seen them would most probably be quite amazed by them.

Trip to the dune – Harsh winds but baby seals

On the day our zoology lecturer left Helgoland and our algae Professor came, our group made a trip to the Dune, a small island just next to Helgoland. They used to form one bigger island until a storm flood separated them in 1720. The ferry only takes a few minutes and if you want to observe seals, this is the place to come. Shortly after getting off the boat we spotted the first seal groups and these sights would accompany us until we left the island again. It was awesome to observe them in their natural habitat and it was a great example of humans and seals living side by side (there are also a few inhabitants here and apparently a camping ground – an interesting destination for summer). I was happy that I had my Monopod with me, the Tamron 150-600mm really becomes heavy after shooting for some time. Getting a low perspective, e.g getting down on your belly and shooting the seals from eye level makes some really interesting images. I had promised my girlfriend to bring back a little baby seal images and after a while I was quite successful how I think. My aim was clearly to hear the “awwwww” when showing it – and it worked 😉 I shot lots of photos and I´ll have an extra post on the two seal groups occurring on Helgoland – the grey seals and the common seals, so stay tuned for that if you find them interesting like I do. 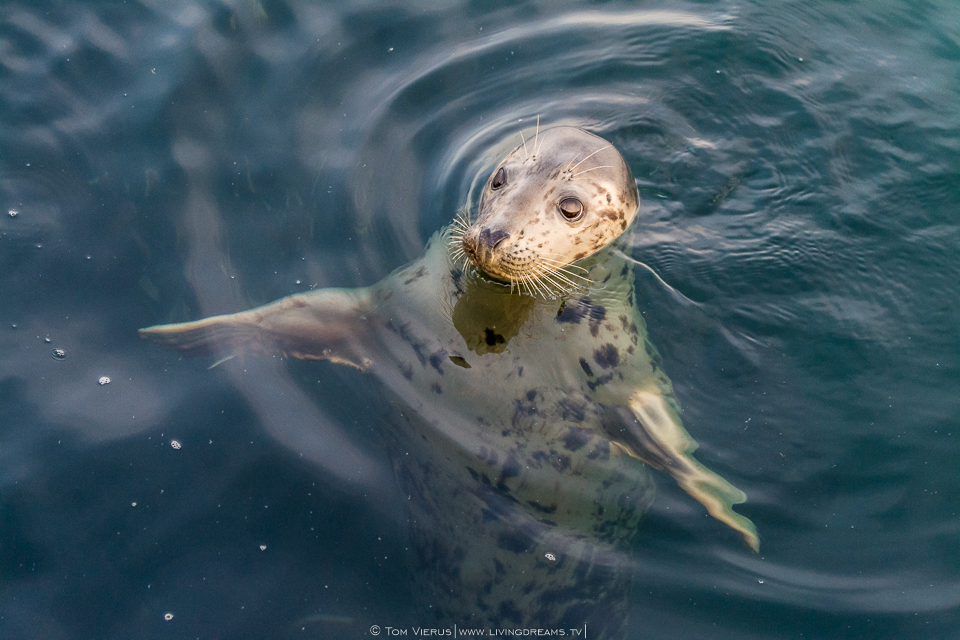 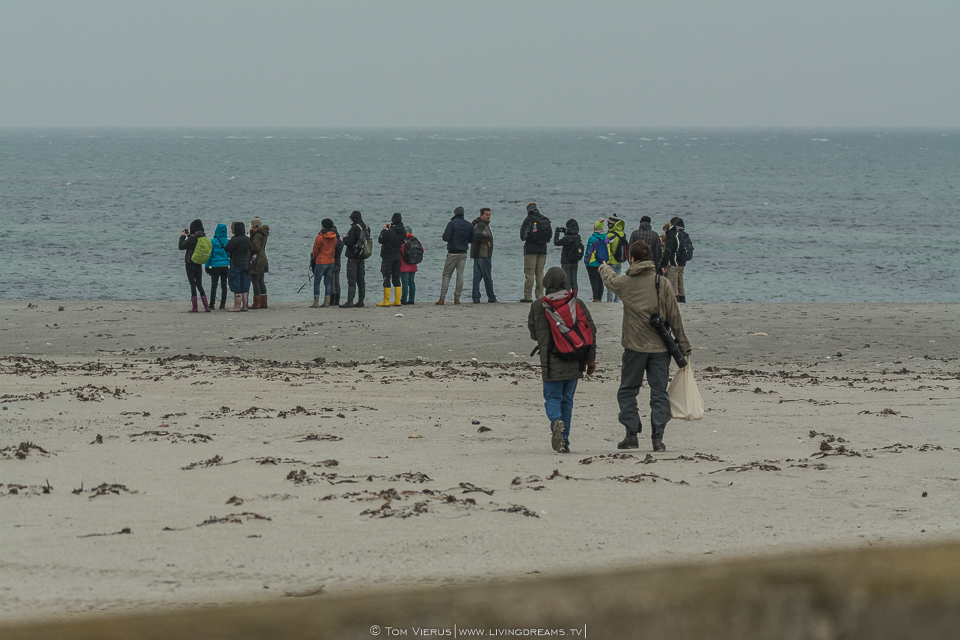 Our ISATEC group on the “dune” observing seals 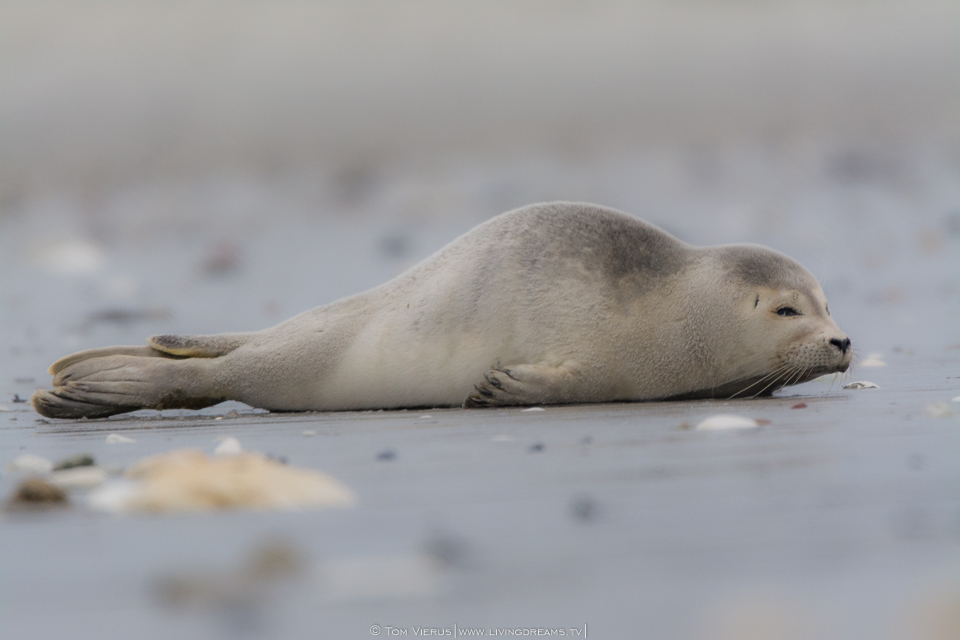 All in all, we really had a great trip, got to know each other better and of course most of us learned quite a few things during our time. I especially enjoyed the photographic opportunities, though I wished I´d have more time. But as I use to say: “Man sieht sich immer zweimal im Leben”. 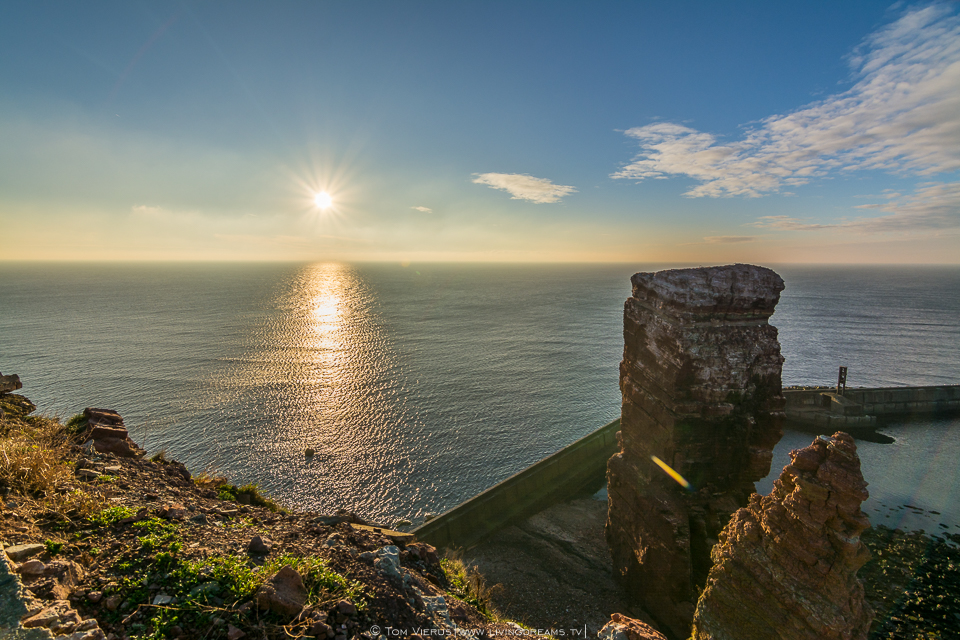 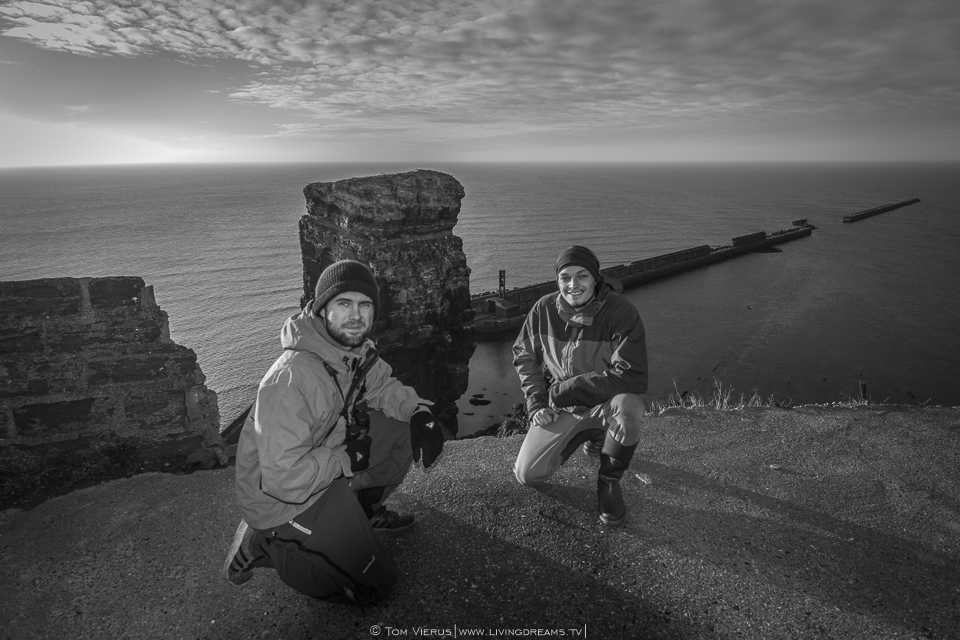 Ole and myself on an old platform. From here we could observe cormorans sitting on the “Long Anna” 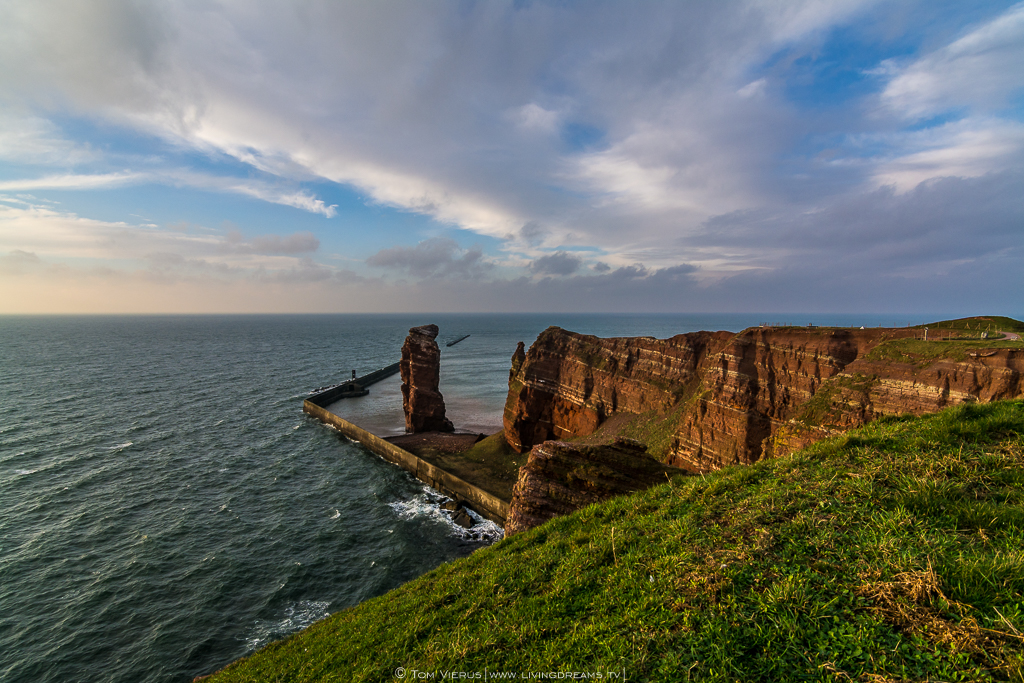 The “Long Anna” – one day it might break, until then it really looks beautiful! 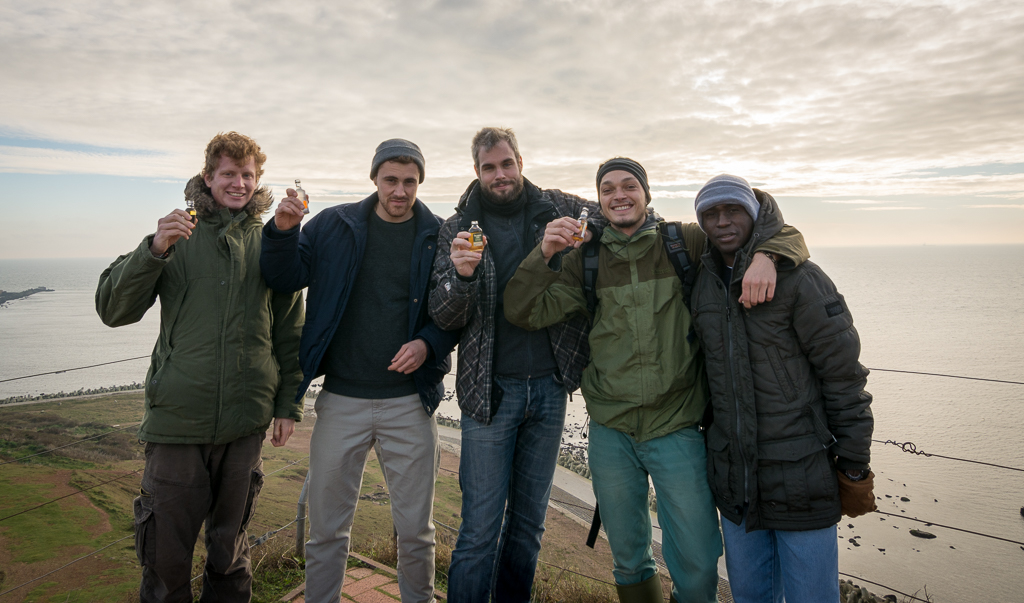 Last but not least: there are no taxes here on Helgoland, so your can shop duty-free. From time to time we therefore allowed ourselves a sip 🙂 Cheers!

[…] I had been to Helgoland about three years back in 2014 during an excursion with my ISATEC master coh… and came to love this little offshore island. Though back then we visited in November and thus had some pretty harsh conditions (cold, rain, fog, wind), I was stunned by the amount of wildlife here. Dozens of bird species migrate via Helgoland and it is here that you can find grey as well as harbor seals, Germany’s biggest predator!! It is a tiny island only comprising of about 4,2 km2 and its little neighboring island ‘the dune’ is even smaller. Hosting the camping ground it would be our final destinations of the day . Amanda and I have been around quite a lot in our almost two years together, but one thing still missing was a camping trip . So, since we are already living up in the north why not go to Helgoland? […] 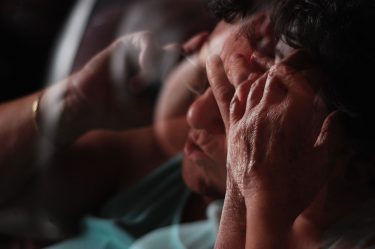 Is there a natural way to behave? About jealousy, the Stone Age and a long-lasting controversy | Evolutionary Psychology

Today Stefan Gehrig takes us on a magnificent journey through evolutionary psychology and its controversials. I am happy...