Maybe a couple dozen blacktip reef sharks can be seen at the water surface circling around our little boat. Fully equipped with all our dive gear and sitting on the edge of the boat, we are ready to jump in the water and share the space with these beautiful animals. Nicolas Buray, the French owner of Tahiti Shark Expeditions counts down from three and with a back roll we enter the warm Pacific Ocean. 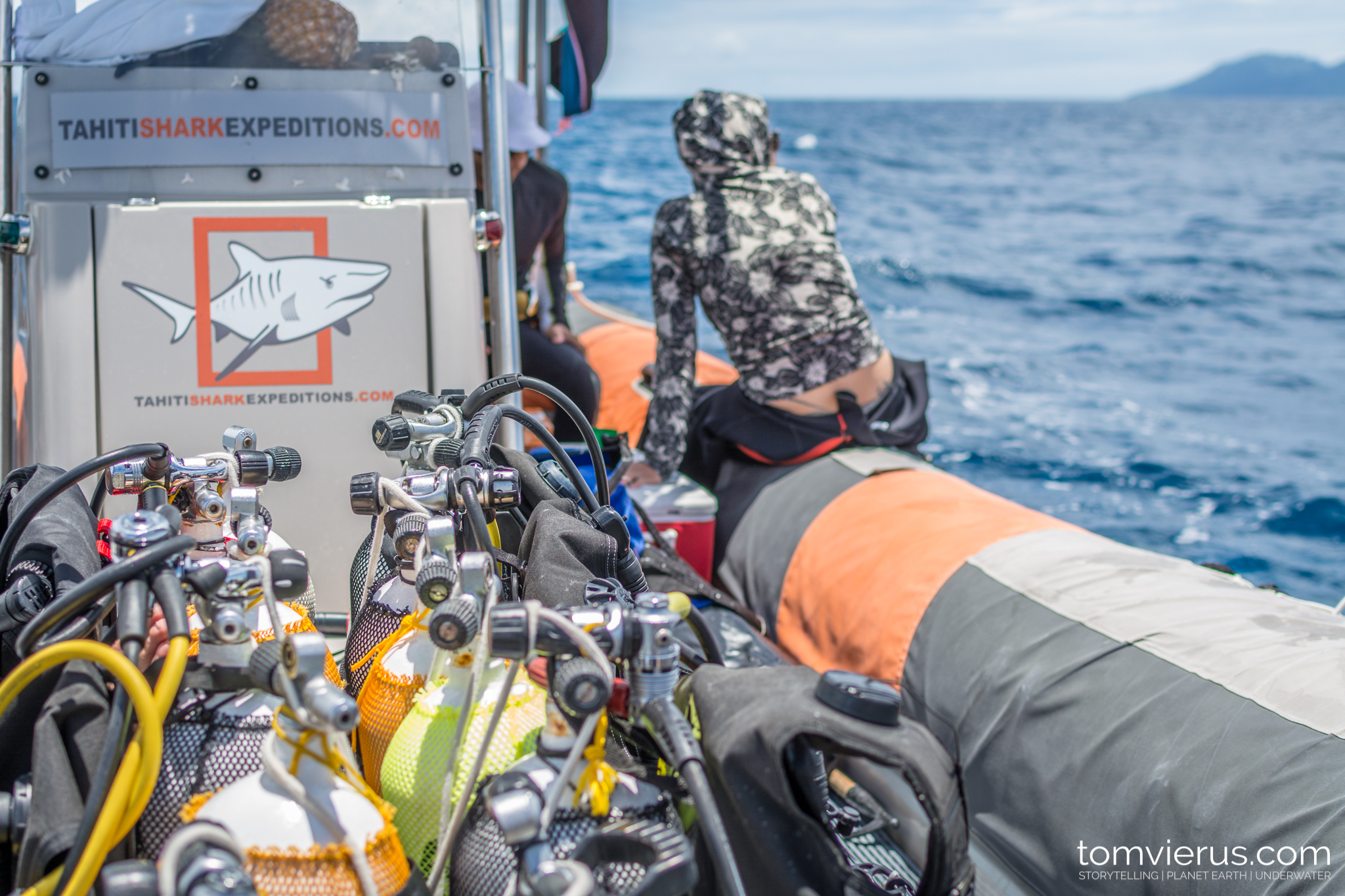 It’s a great feeling to blow some bubbles in the first place but I am especially thrilled about being back in the water with sharks. It’s been quite a while since I last dived with such large amounts – to be exact that was more than 16 months ago in Fiji. Earlier this year, Amanda and I spent a few weeks in Indonesia and concluded our trip with a four-day liveaboard trip in west and central Komodo, where we did encounter sharks, but of course never in the numbers seen during chummed or baited shark dives.

Anyway, as we sank to the bottom I quickly made out three shark species. The small and agile blacktip reef sharks (Carcharhinus melanopterus), whitetip reef shark (Triaenodon obesus) and grey reef sharks (Carcharhinus amblyrhynchos) were dominating the area stimulated by the chumming box filled with tuna offcut. We descended right into a large cloud of snappers and other reef fish which – just like the sharks- where hoping for a quick meal. 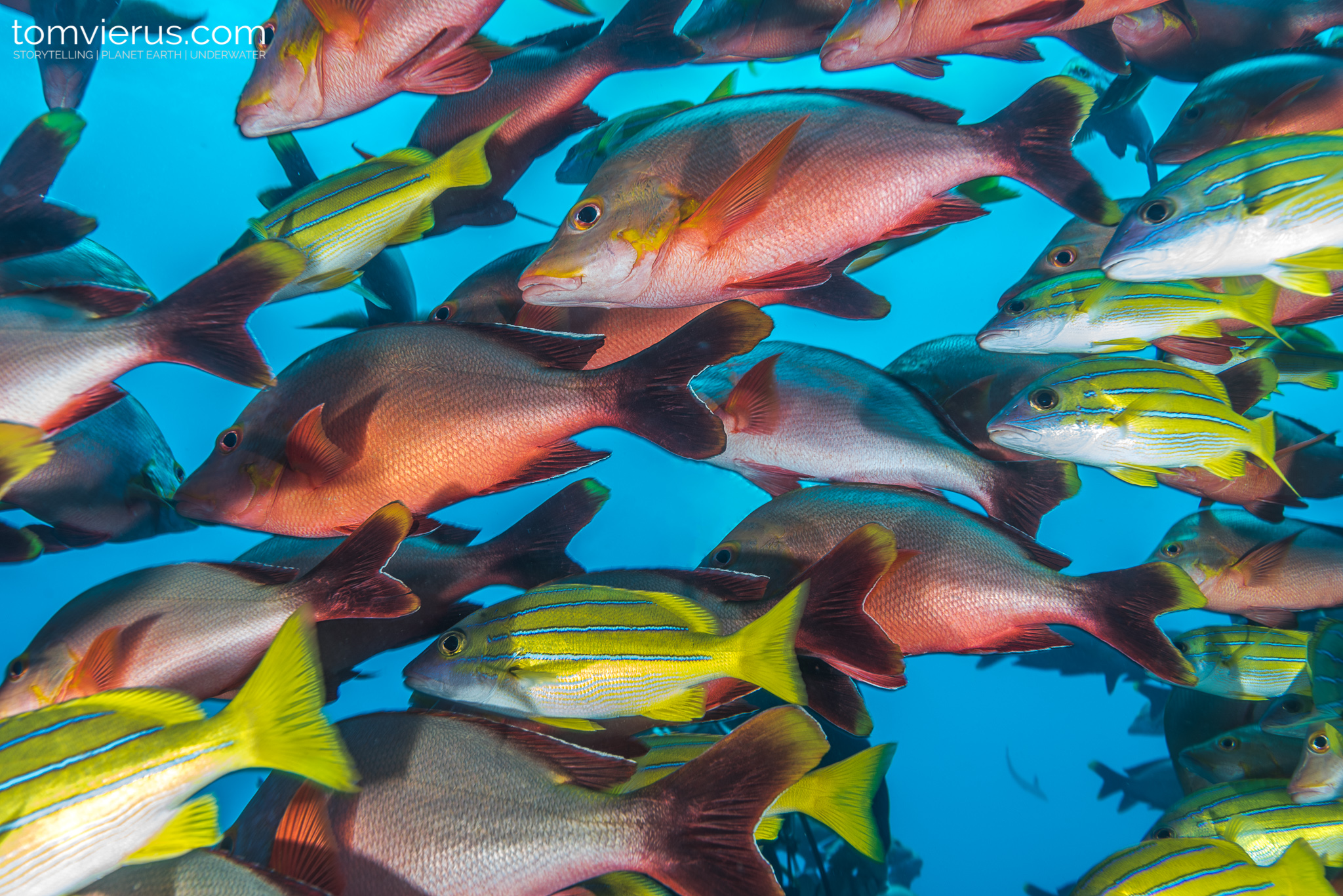 Just a few minutes into the dive, a large shadow appeared in midwater and there was no doubt in my mind what it was. I’d been hoping to see this particular shark for a very long time: a tiger shark! Seemingly not really in the mood for a photo shoot, it seemed to only check us out in the distance and before I even could make out the pattern (not even to mention the eyes), it disappeared in the distance. Being at the beginning of an hour-long dive, I didn’t give up hope. The ocean is not a zoo, and nothing is guaranteed. At the same time almost anything can happen at any given moment. As usual I would wait patiently and kept my fingers crossed for another, and closer, encounter. 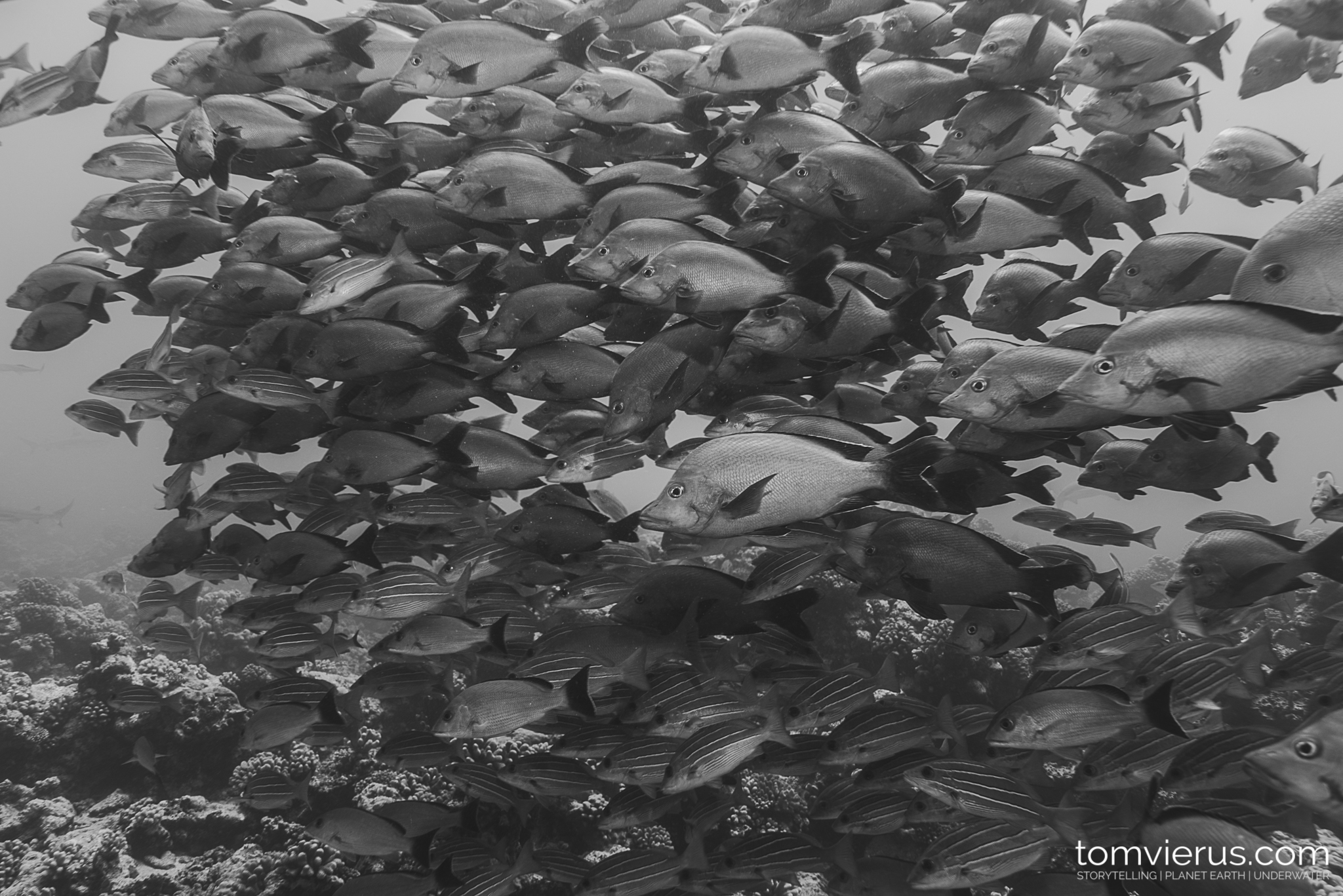 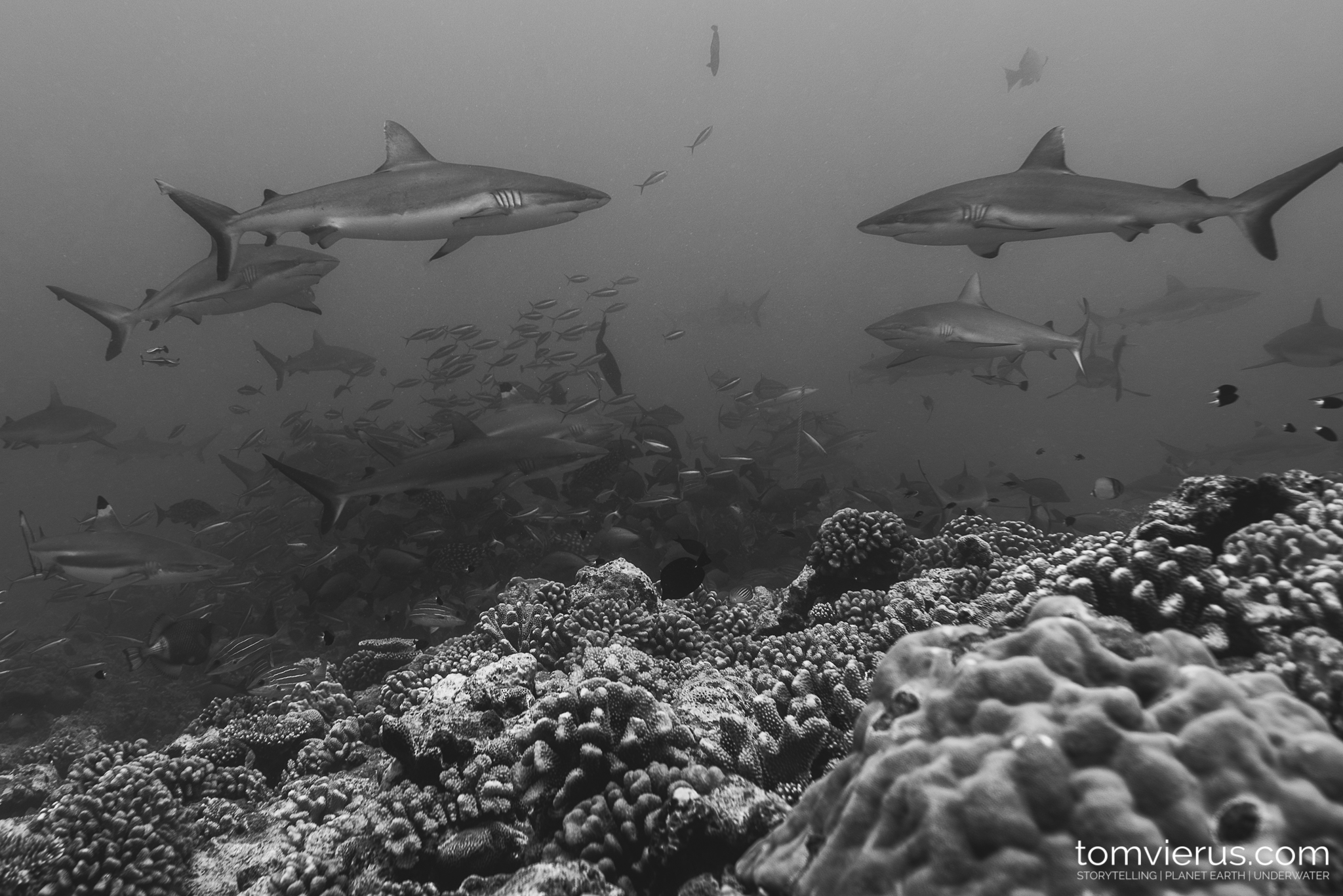 While we were kneeling on the rocky bottom two adult lemon sharks payed us a visit but were neither in the mood for a long stay. Similarly, s a 2m nurse shark popped by to say hi but made its way back to wherever it came from rather quickly. The diversity of sharks was great and despite the missing special guest, I truly enjoyed the observation of these eloquent animals.

The current picked up and it wasn’t exactly a smooth dive, but compared to the currents we encountered in Komodo, this was pretty ok. We circled around the area where Nicolas had placed the chumbox and passed rather plain rocky fields, but also pretty healthy acroporas (hard corals) on the way. While swimming, we were constantly surrounded by about two dozen of grey and black reefies. 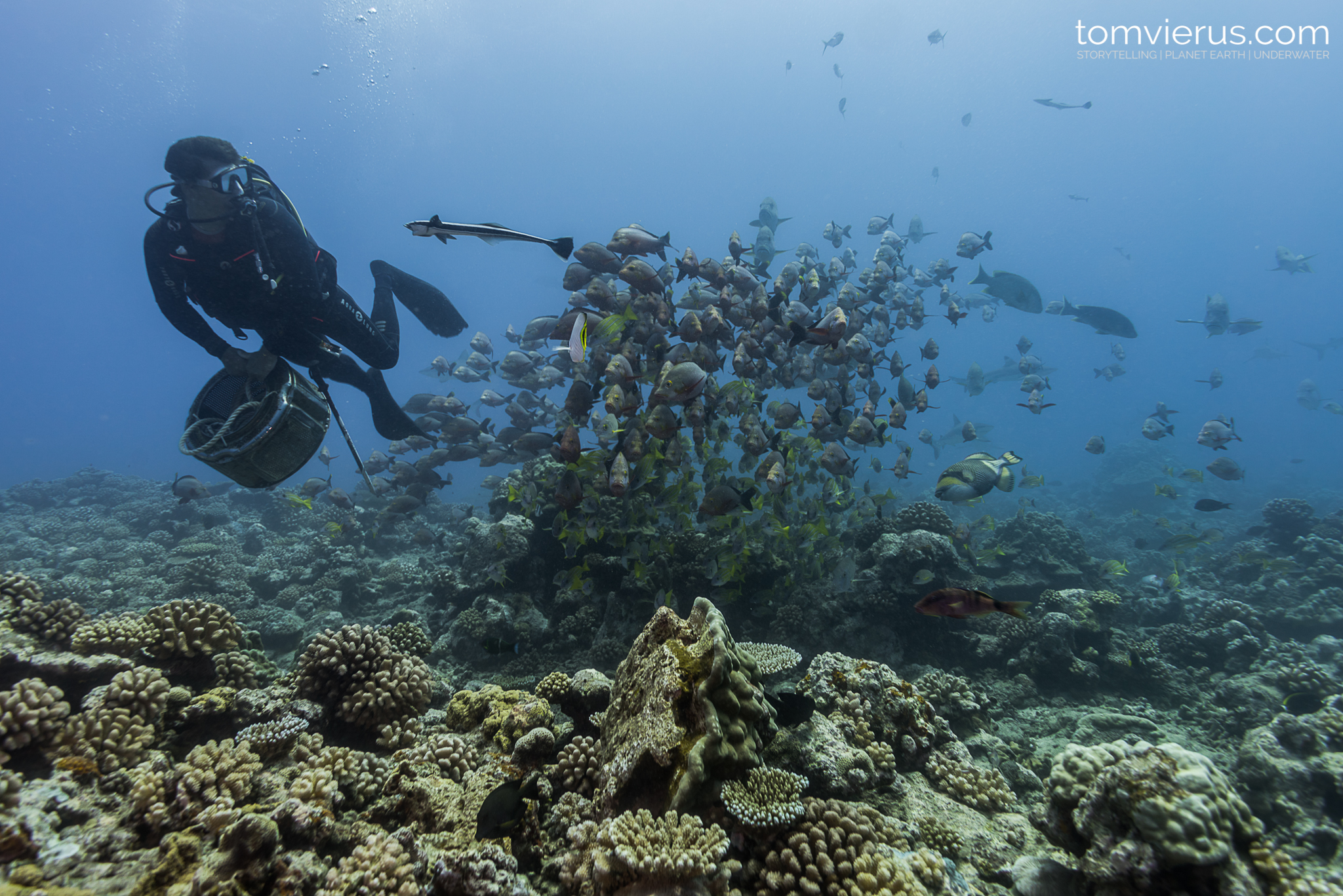 Back on the boat we enjoyed some food and were surprised (or at least I was) by several whales surfacing very close to us, some of them being mothers with their calves. “What a place”, I thought. “We are on a boat between Tahiti and Moorea, surrounded by dozens of sharks, below us a few tigers doing their thing and just a few hundred meters away, whales are breaching the surface.” I really love the abundance of ocean life in this place. 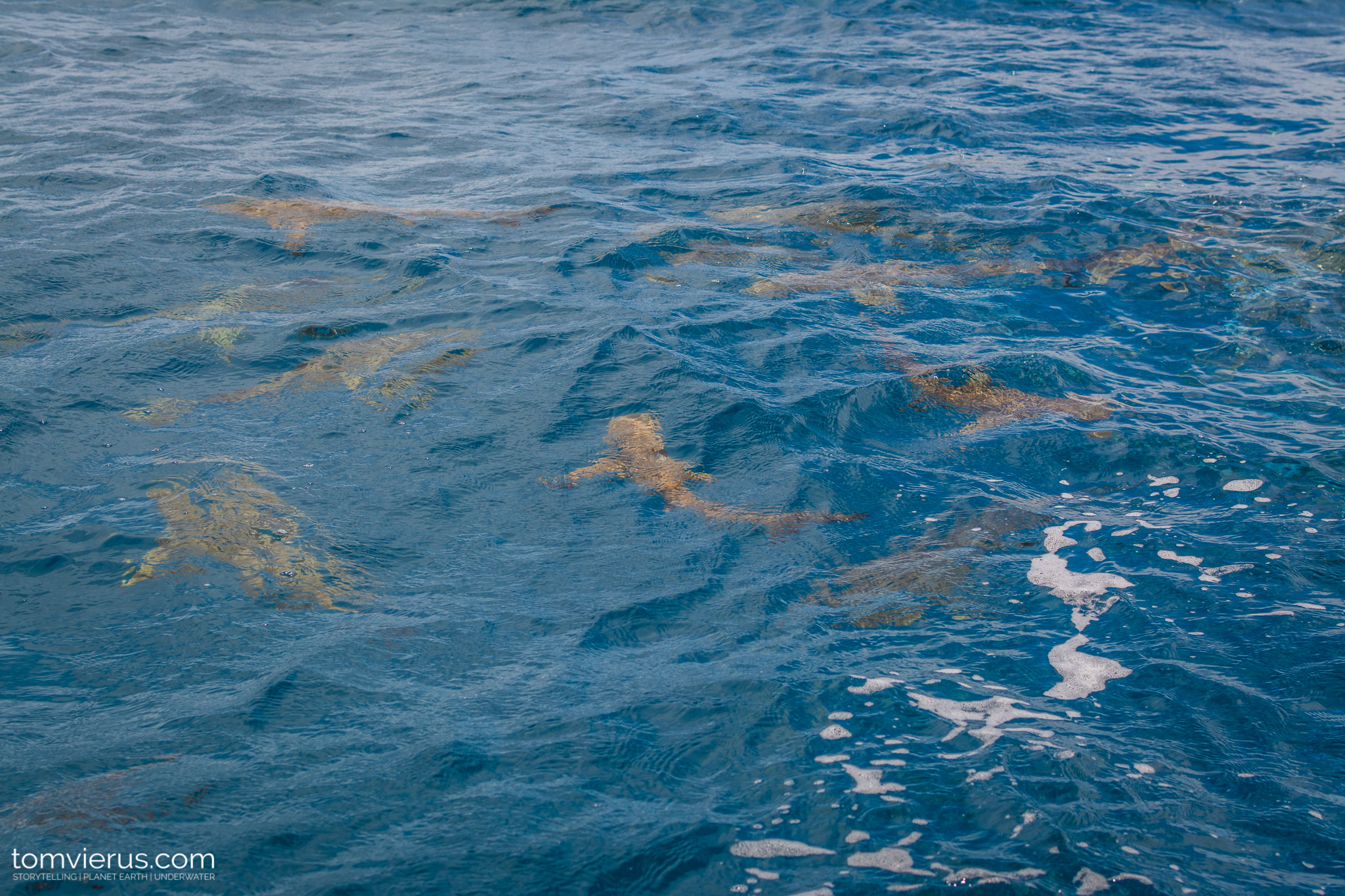 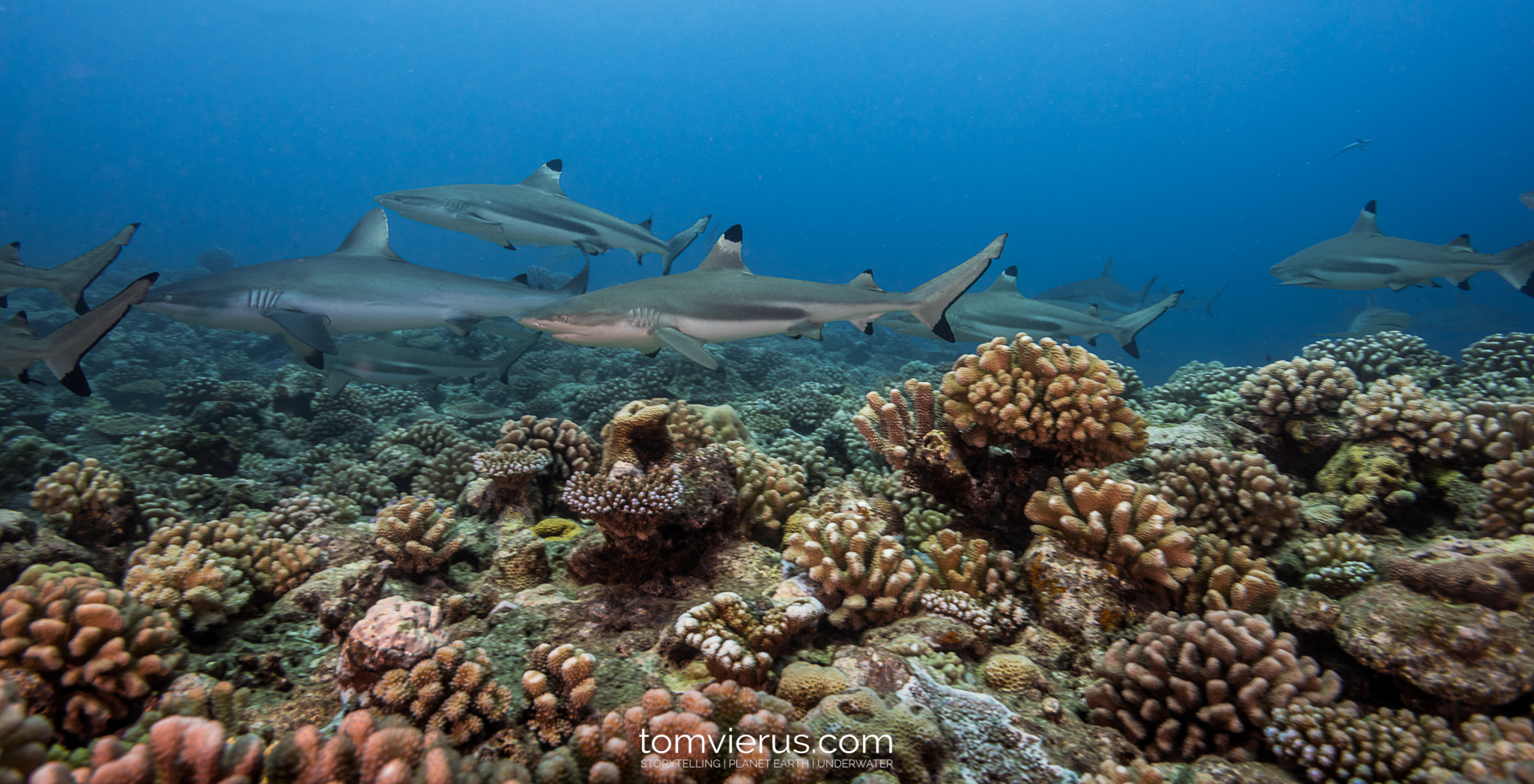 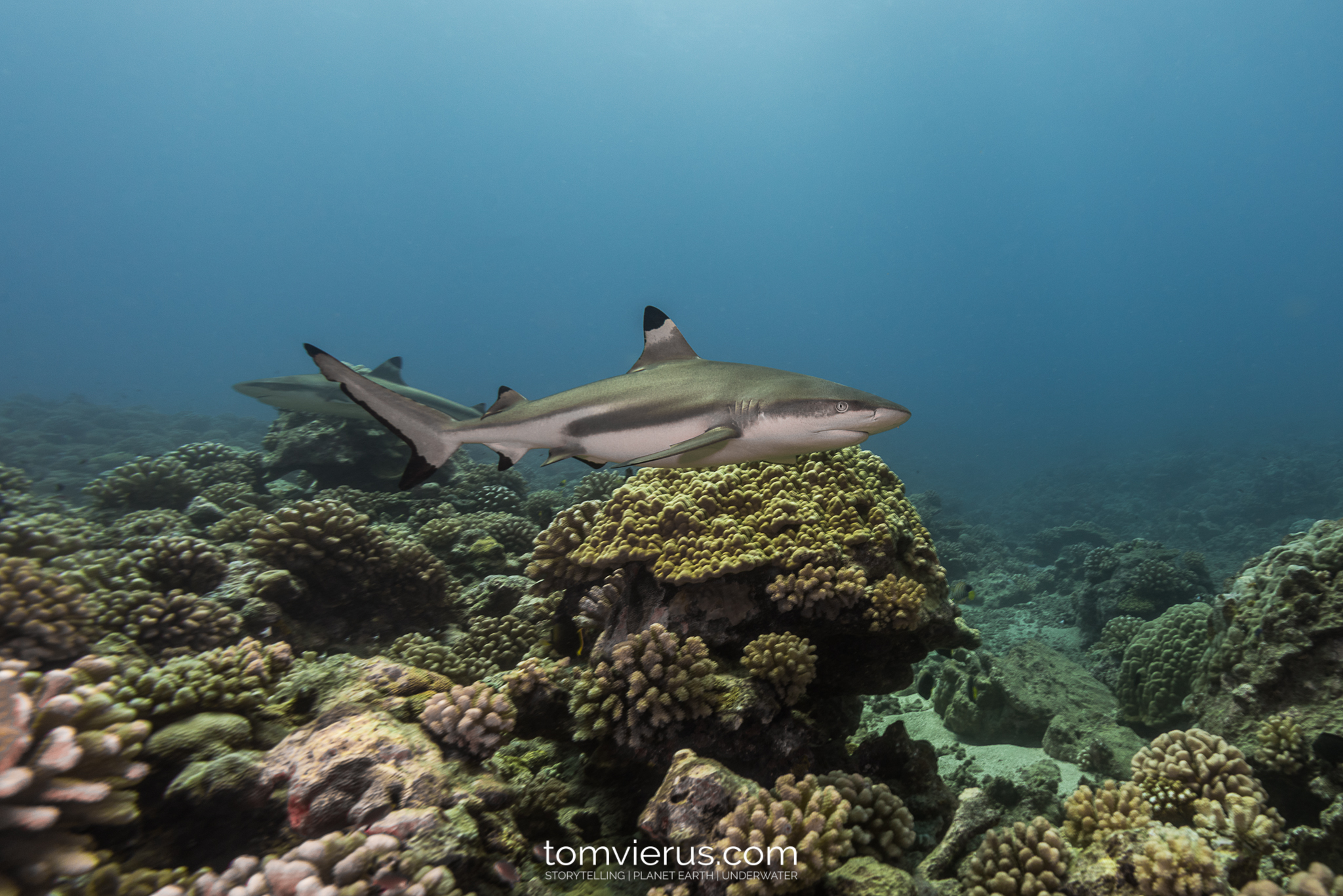 On the second dive, same game again: one of the tigers frequently visiting this site did show up, but didn’t bother to present itself in front of the camera and swam away the moment it had arrived. Somehow these animals stay elusive for me. I wasn’t lucky in Fiji and no luck here so far. But then again, these were my first two dives here and surely, I cannot expect to see everything straight away. “Stay patient and they will come”, I told myself. If not today, then the next time.

Sharks and whales in the thriving ocean around French Polynesia

But the waters around Tahiti and Moorea do not only have to offer “la vallée blanche”, as this dive site is called, but also an unaccounted number of other dive sites and especially marine wildlife. Next to numerous species of sharks roaming its territorial waters, French Polynesia is home to quite a few species of cetaceans. A 2014 survey by the Pew Environmental Trust showed that at least 10 species of marine mammals, 14 species of sharks, and four species of rays roam the waters. 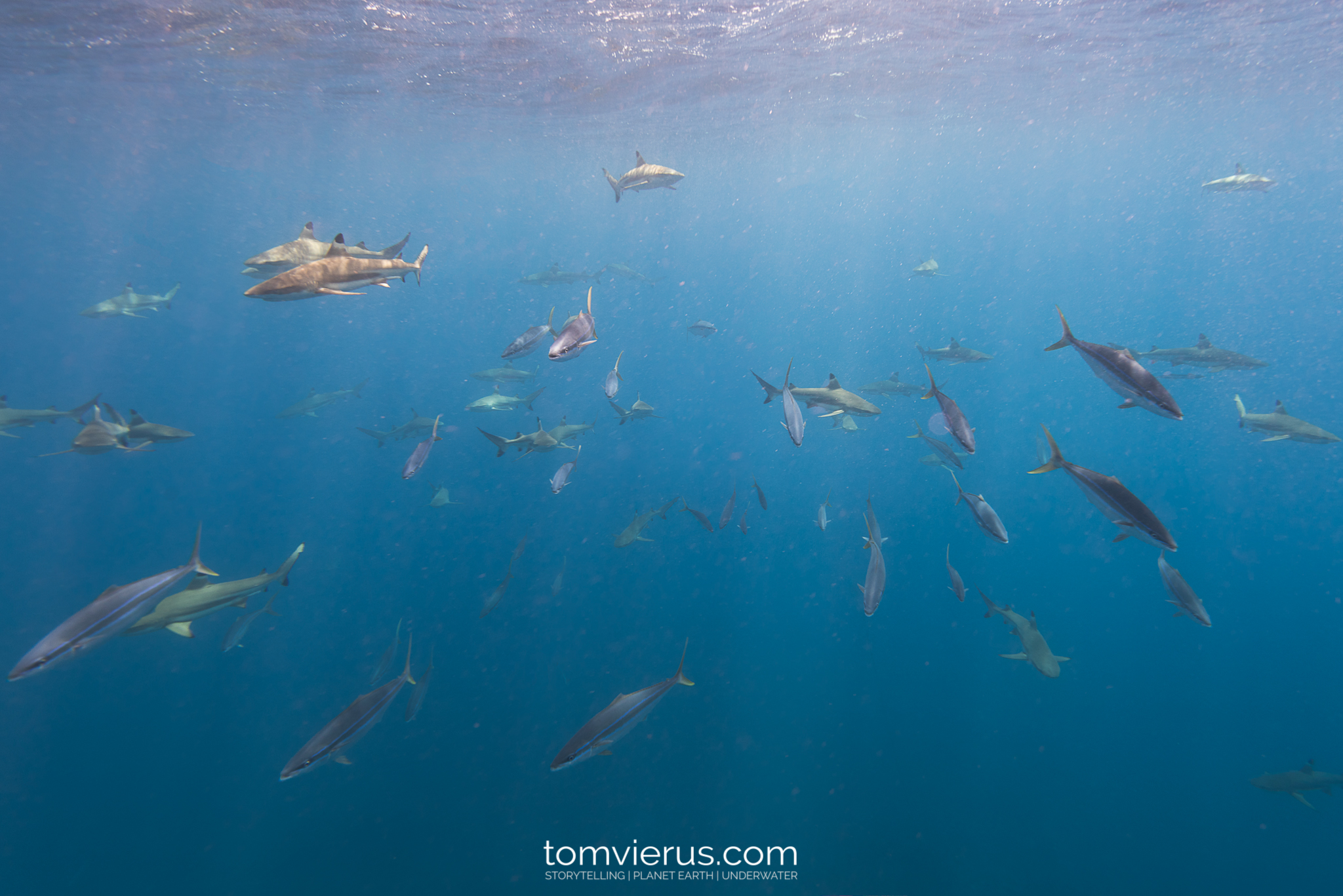 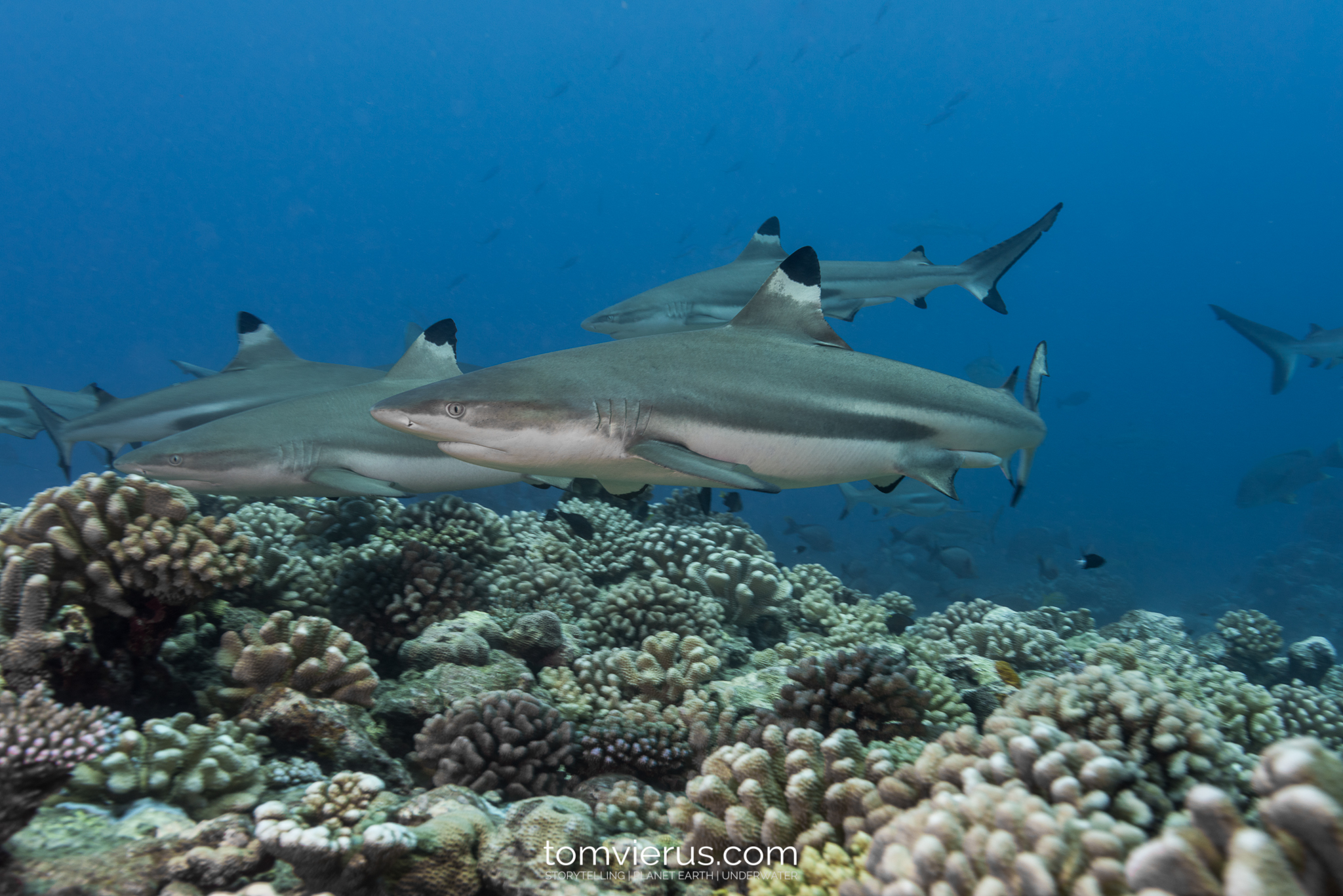 From sharks to whales

Since I am not sure when I might be back in this beautiful area of the world and having had a whale encounter on my “things-to-do-in-life- list” quite high up, we joined a trip to watch and swim with whales. Unfortunately, the season is pretty much at its end and as the summer starts here in the southern hemisphere, the whale mothers leave the warm waters with their newborn calves and head to antarctic waters to feed on massive amounts of krill in the cold and rick waters. 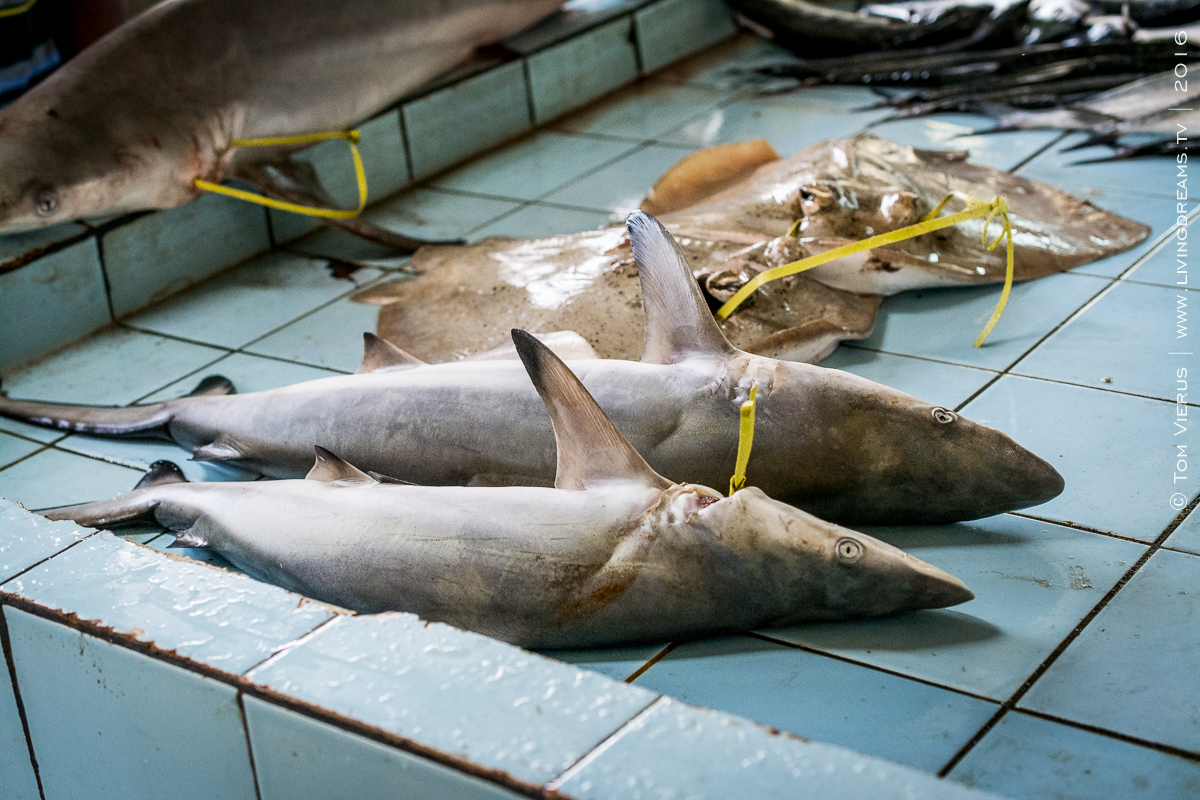 My Fiji Shark | Adopt a shark and help conservation

There are plenty of whales around Moorea itself, so no need to head over to Tahiti for these excursions. We joined one of the few tours here and after less than half an hour encountered our first humpback whale. It was male, resting upside down in the water column and….. he was singing! 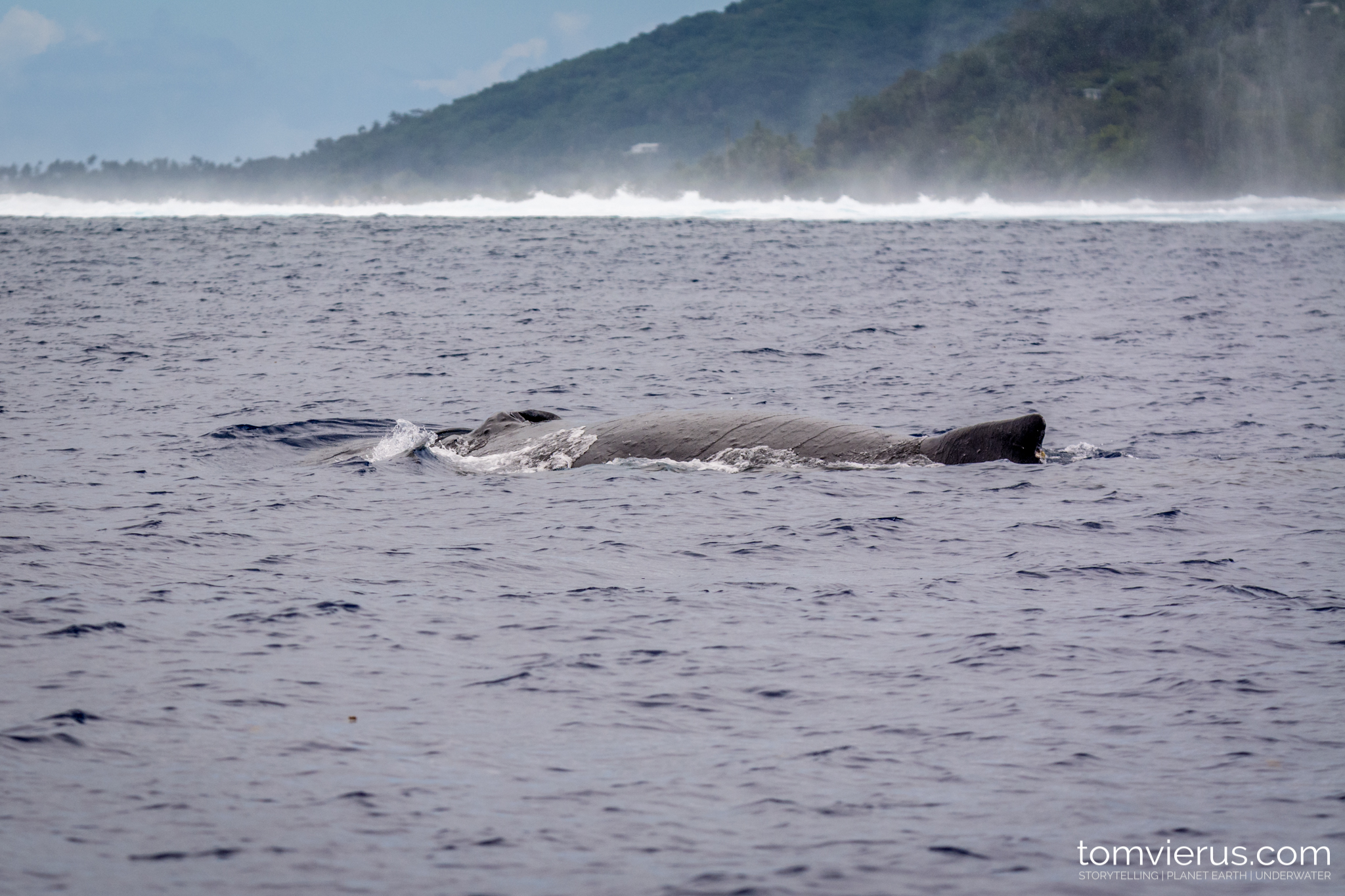 We slid into the water, as quiet as possible, and approached the whale in our snorkel gear. As soon as I put my head underwater I could hear it: the impressive sounds of a male humpback singing. If you are unsure what I am talking about, check out YouTube for humpback whale songs.

We needed a few minutes to actually get the whale in sight. The water was a little turbid and the view wasn’t really great. Additionally, the male was in about 20m depth, but the sheer silhouette was already extremely impressive! Just picture a school bus in the water and you get the idea.

Unfortunately, this particular guy wasn’t too social and stopped singing when another group of whale watchers arrived he made its way back to the depths and vanished in the blue. Pretty thrilled by the encounter but still eager to get some images, we got picked up by our boat and continued our search and came across some spinner dolphins, that were playing in the waves. 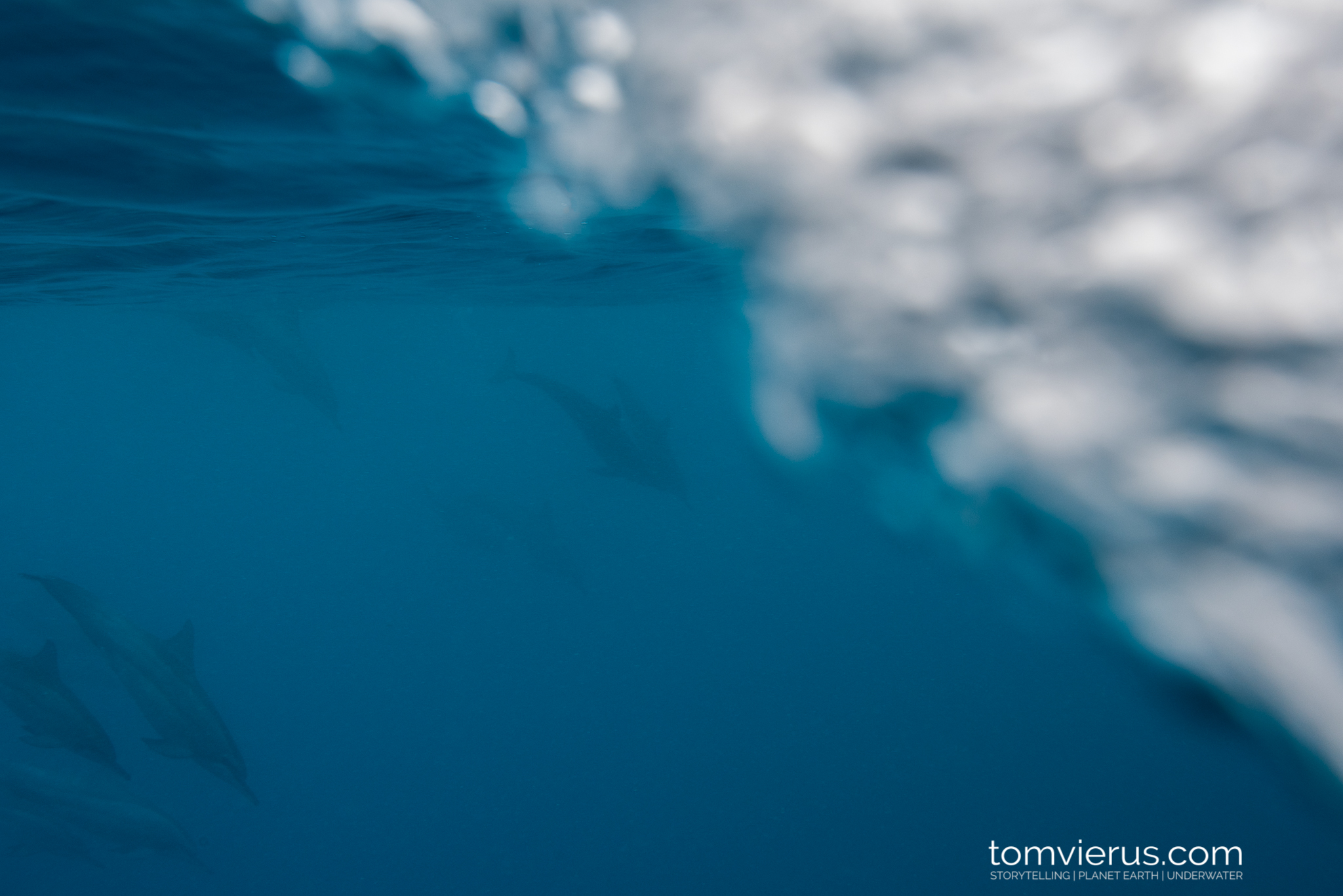 Although we couldn’t manage to find another mother and calf, we were able to get in the water two more times. When our captain saw some whales swimming parallel to the coast, he brought our boat way ahead, we got in the water and just waited for these school bus sized animals to pass right beneath us. Very quick encounter, but… wow! 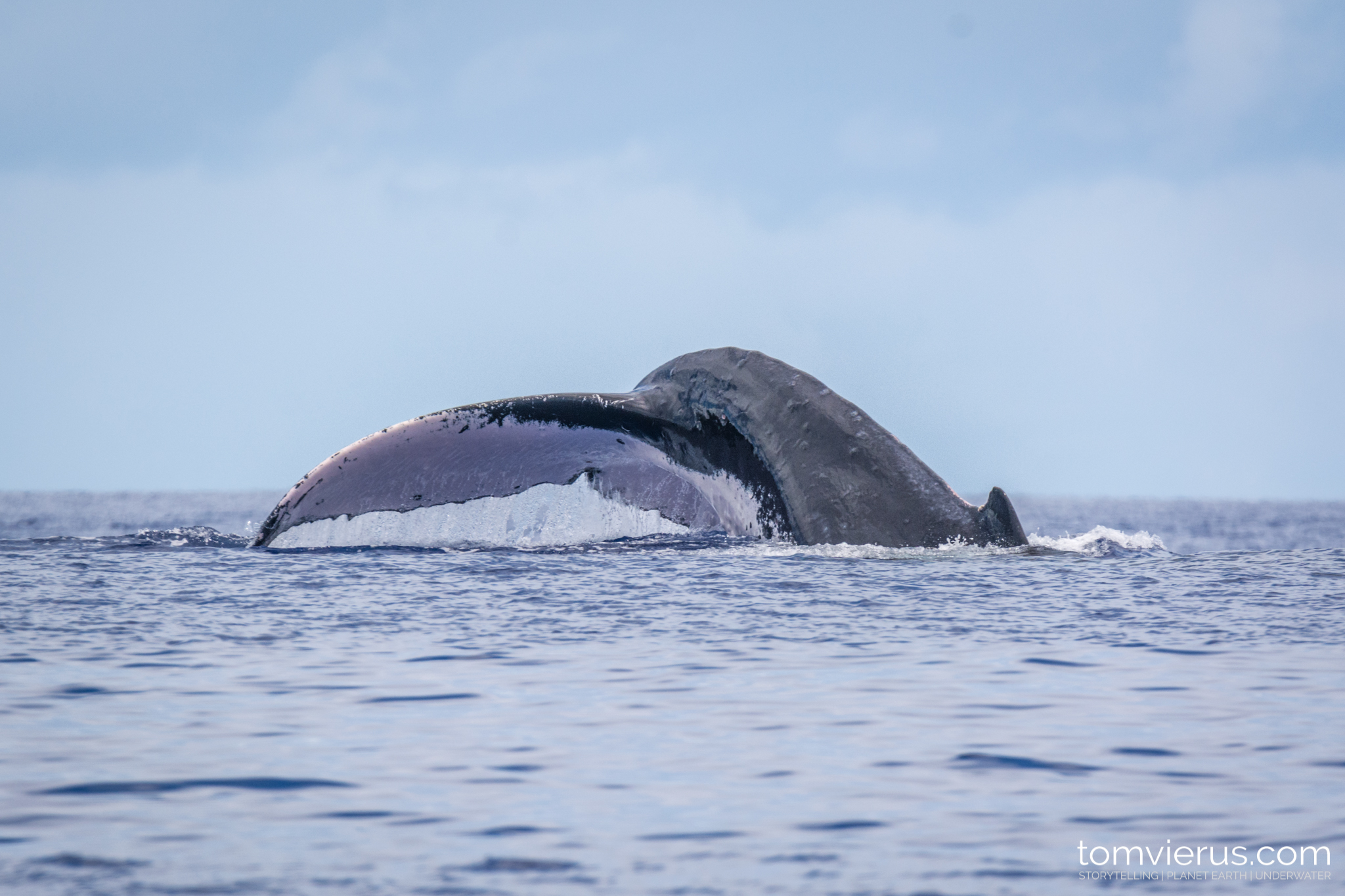 Like the tiger shark encounter, I wasn’t really able to see the eyes of the humpback whales we encountered that day either. However, I was adamant that I was going to try it again. There is something about being up and close with an animal and actually looking right into its eyes. It makes it such a deep and humbling experience.

Another day, another chance

About ten days later, Jodie and myself tried our luck again. This time we went with Moorea Eco Tour. They had a pretty nice catamaran and a hydrophone on boat, so we could actually use it to detect whales underwater that might still be pretty far away and not to be seen yet. The owner told us the evening before they had encountered a mother and a calf, so we might be lucky, but at the same time I was well aware that this might be the last chance. If I didn’t try it, I’d kick my ass back in Germany. 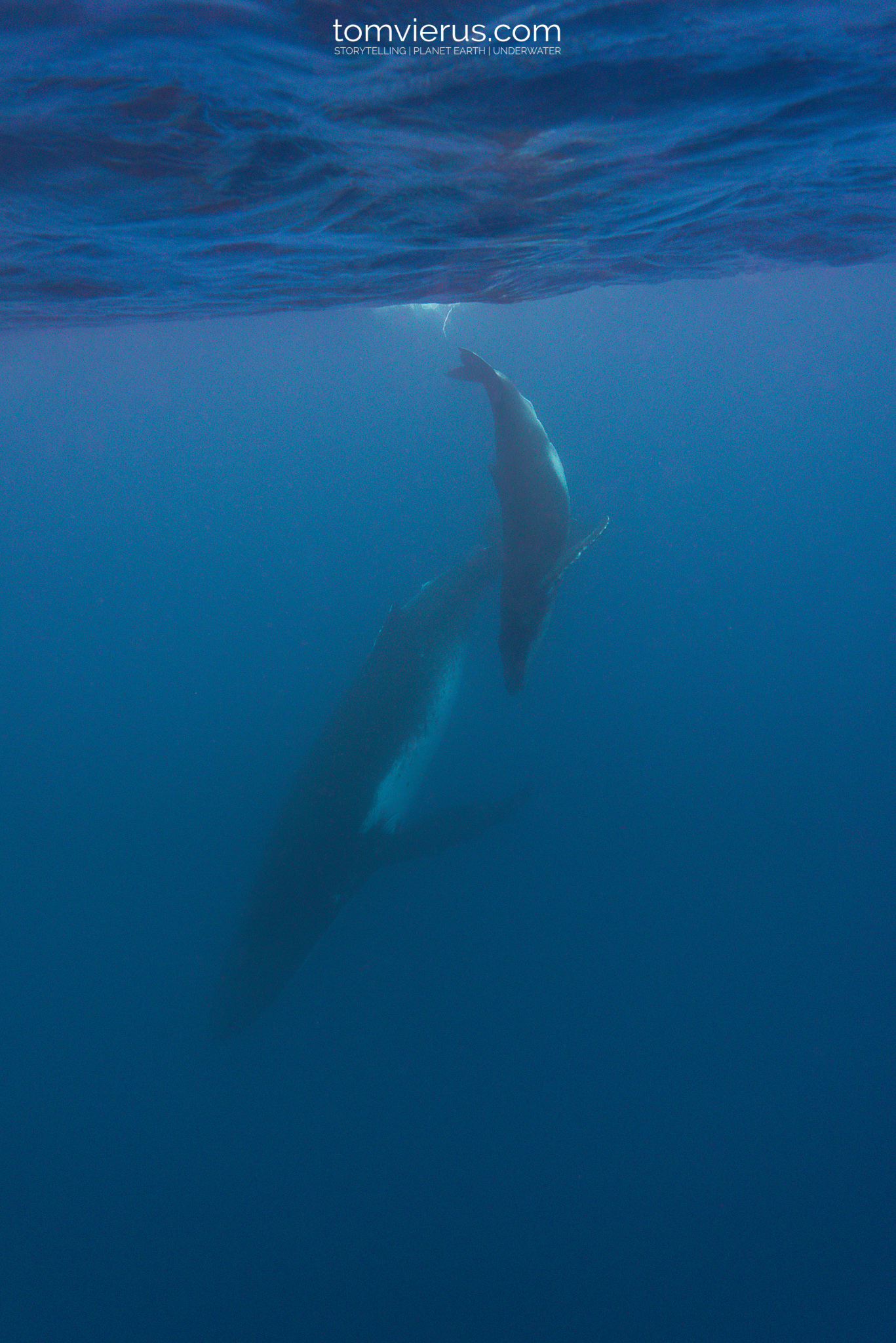 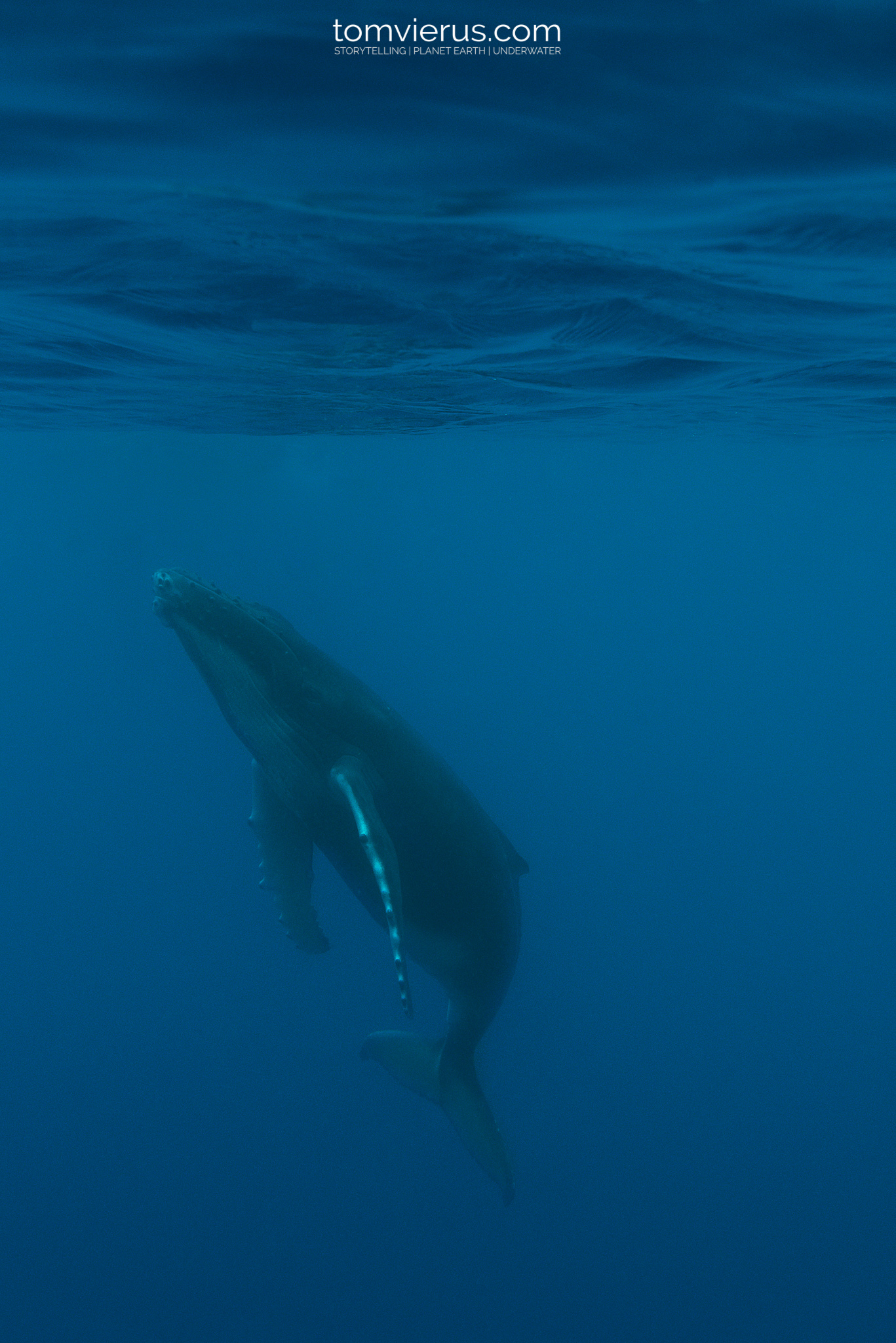 An hour into the trip and cruising down Moorea’s coastline, we hadn’t spotted any whales yet but were in for another great surprise. Out of the blue the captain called us to the back of the boat – a bonito (a type of tuna) was following us. I tried to spotit with my eyes, when suddenly a Marlin appeared out of nowhere right behind the boat! What a fish! Around 3m, and its blue fins were literally popping out of the water surface! It followed the boat for a few minutes (maybe hunting the bonito, that tried to find shelter under our boat?) and I quickly grabbed my underwater housing to snap a few underwater images. Viewing the images later though, it turned out none of the shots actually captured this amazingly beautiful animal. 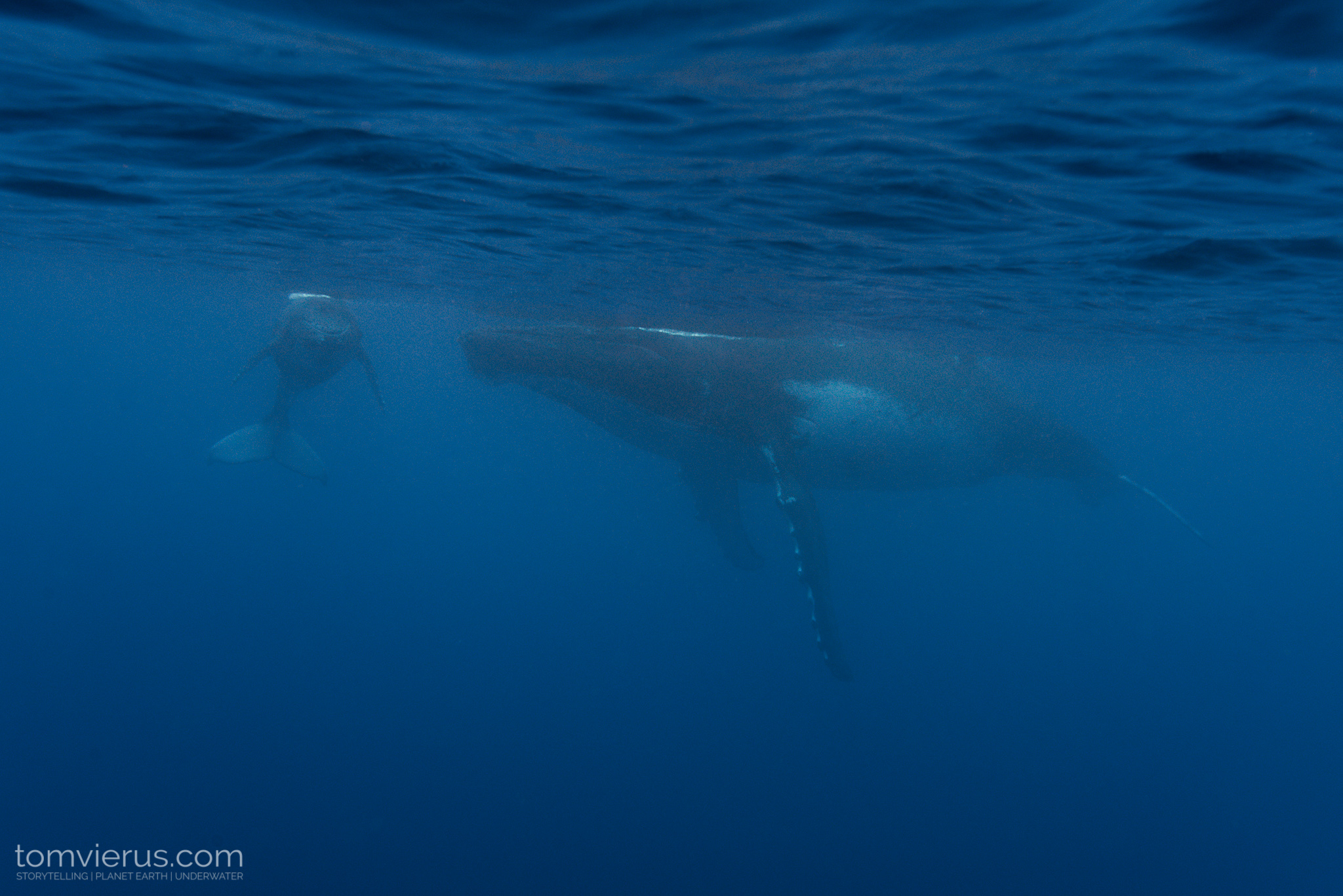 Another hour went by and still no signs of any whales. Then suddenly, the spotter noticed a spray at the horizon. We had finally found one. And if this wasn’t good enough, we found a mother and a calf! This meant, we might be able to approach them closely and observe the rather active calf swimming around. The little ones need to breath every 3-5 minutes, which means they stay quite close to the surface. Again, we quietly slid into the water and approached the whales slowly avoiding any kind of splashes.

And there they were: absolutely stunning, less than 15m from us. The mother chilling head down and almost touching the water surface with her fluke, while the little one seemed to be playing and swimming around. After two or three minutes, it decided to come check us out and see what these other funny looking mammals are doing in the water. It approached us to about ten meters, grabbed a good look and turned back to the safe vicinity of mom. 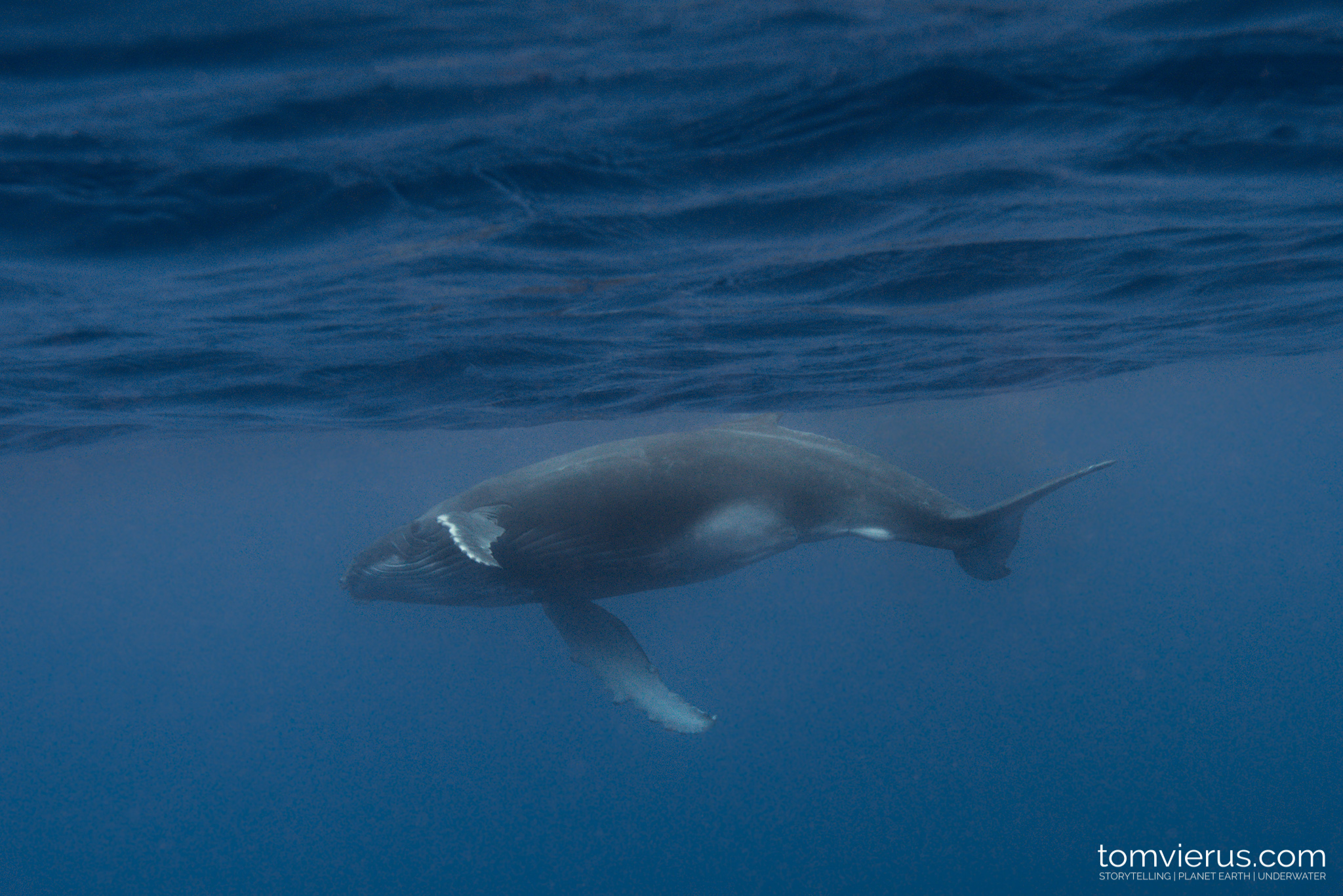 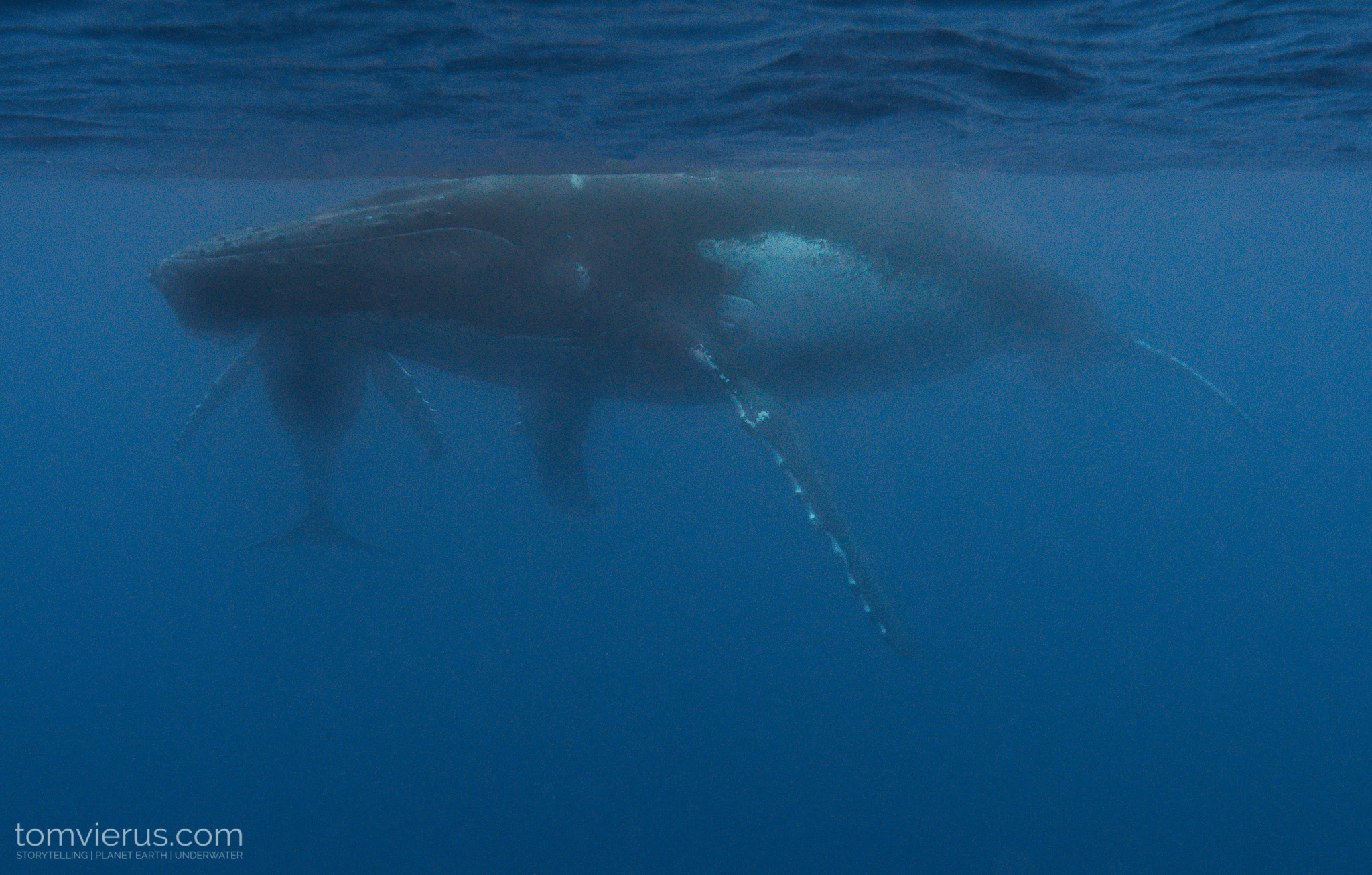 As the tour operators are radioing each other their findings, we were joined by three other boats a few minutes later, which made the whole experience a whole lot different. Suddenly we were more than 20 people in the water, some of them swimming too close or above the whales. It seemed like a little chaos to me. Nevertheless, the mom stayed calm and allowed us to be quite close to her and her calf. We were able to spend around half an hour with the two of them and at some point, not more than seven or eight meters were between me and the head of the mom. I couldn’t have wished for a closer and more impressive encounter! Wow, wow, wow.. When the mom decided to leave us, the operators responsibly decided to give her some rest and we returned happily back to the harbor. What a day!!!

#Physioshark Update – four weeks in the field on Moorea - Livingdreams.tv

We are sitting at the beach in darkness watching over the passage between Tahiti and her sister island Moorea. Pape' ete’s...